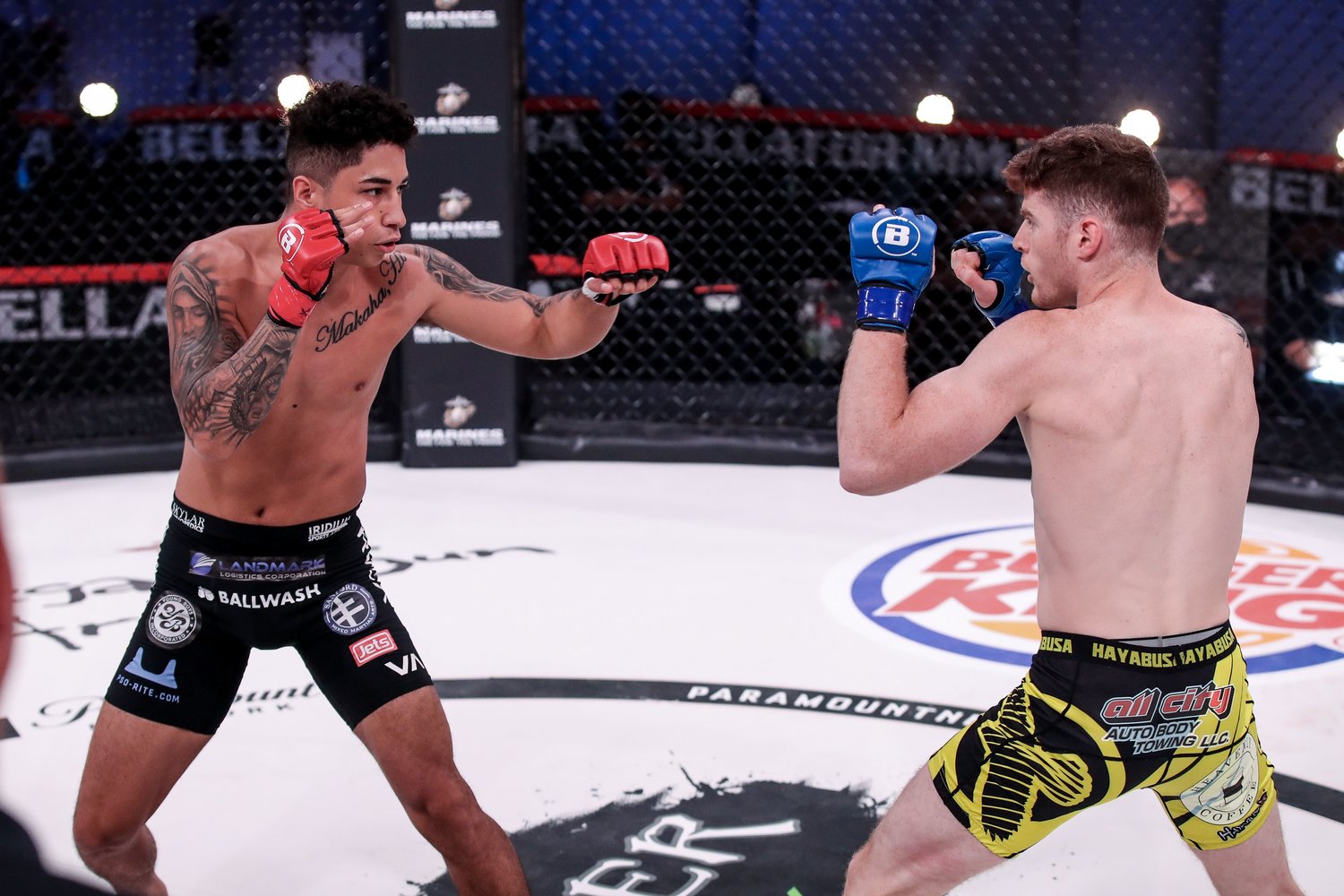 East Rockaway resident Charlie “The Cannibal” Campbell made his debut in Bellator MMA, one of the largest combat sports promotions in the world, on Aug. 7 in a fight against Nainoa Dung at Mohegan Sun in Connecticut.
Courtesy Lucas Noonan, Bellator Media Team 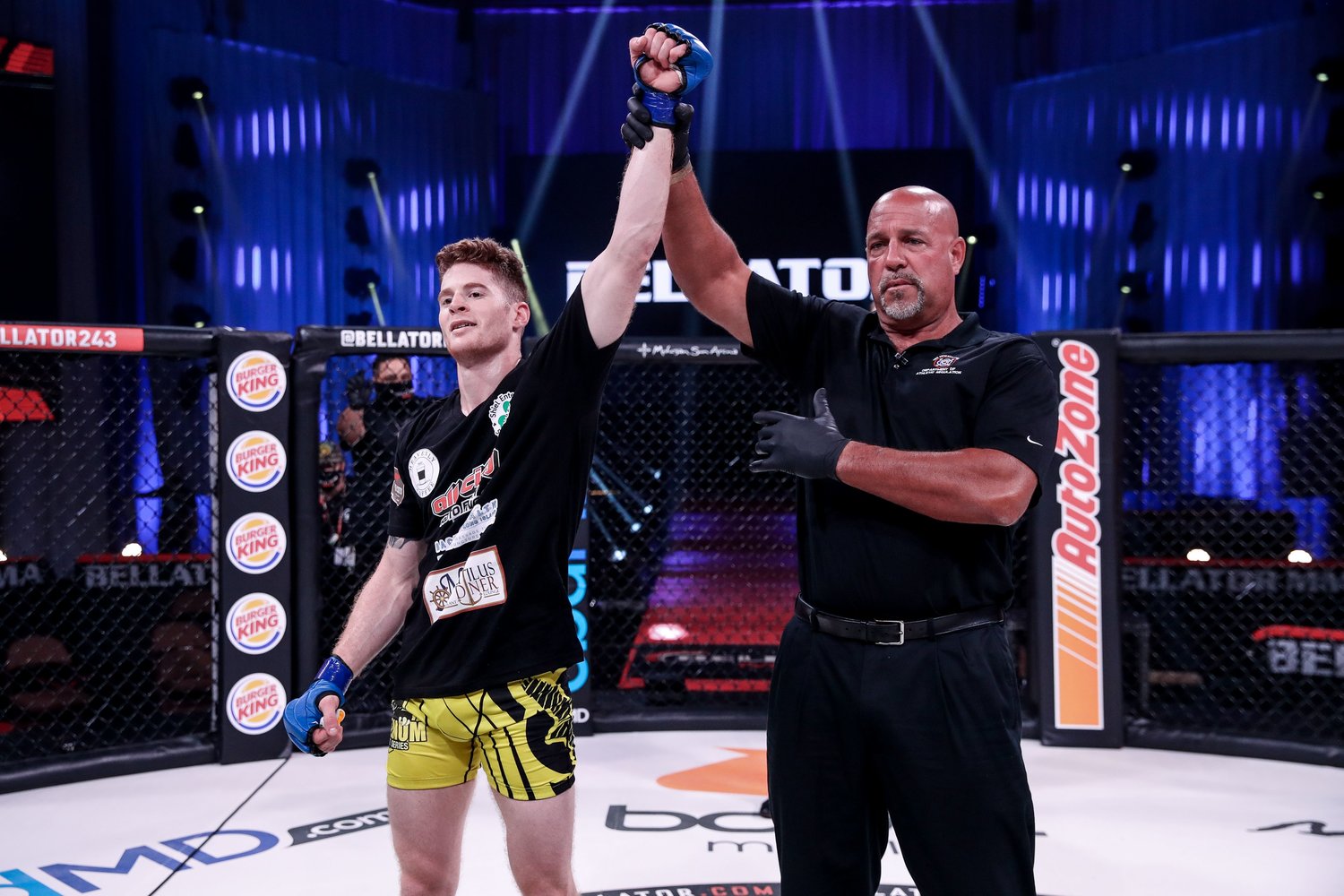 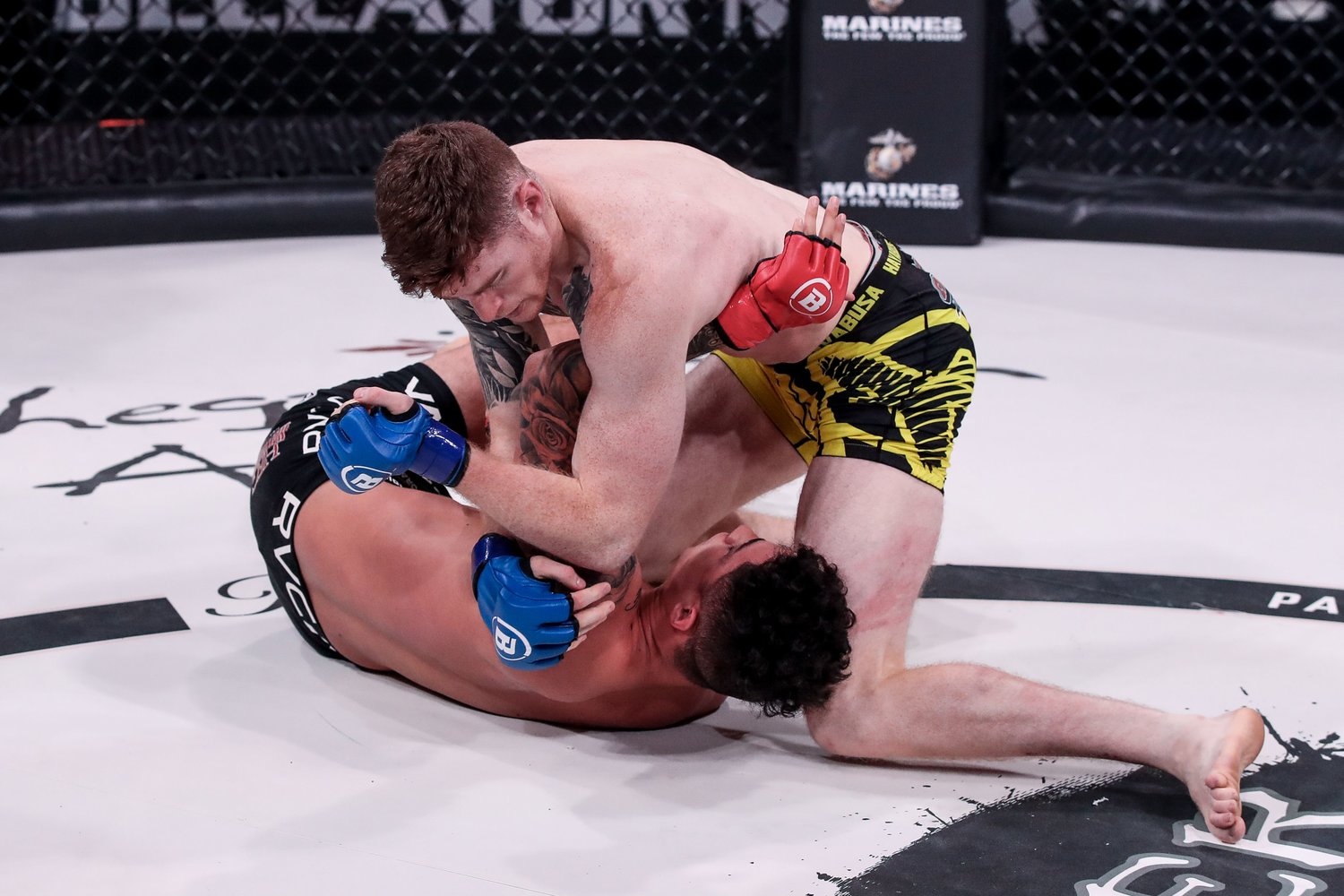 He improved his professional record to 2-1 and overall mark to 7-1.
Courtesy Lucas Noonan, Bellator Media Team
Previous Next
By Mike Smollins

For East Rockaway native Charlie “The Cannibal” Campbell, his first professional mixed martial arts fight for Bellator MMA was different than most amid the pandemic, but he kept his composure and found success.

With the coronavirus pandemic ongoing, Campbell faced his opponent, Nainoa Dung, in an empty arena at Mohegan Sun in Connecticut in one of the preliminary bouts on Bellator 243 with no fans permitted. He also had to arrive five days before the fight, get tested daily and stay quarantined inside his hotel leading up to his contest.

The circumstances didn’t hamper him at all, as he had a solid first round and hit his opponent with heavy kicks before eventually winning just a minute into the second round.

“It was a lot of fun for me to kind of stay composed and make adjustments and find a way to win,” Campbell said. “Because it was on a national level, it still felt like 50,000 people were watching me. As far as entering the cage in that moment, it wasn’t different. I do a very good job of visualizing up until the fight and staying composed.”

Campbell, 25, improved his professional record to 2-1 and his overall mark to 7-1. He was coming off of his first professional loss in November, and said he was eager to get back in the octagon after other fights got canceled amid the pandemic in May and June. He said it was satisfying to finally debut for Bellator MMA, one of the largest combat sport promotions in the world. He won his professional debut fight in May 2019 at Ring of Combat 68.

Campbell is a lifelong East Rockaway resident, and began competing when he joined the Lynbrook Titans wrestling program at age 6. After the Titans program, Campbell began training in jujitsu and kickboxing outside school when he was in ninth grade, and he graduated from East Rockaway Junior-Senior High School in 2013. When he turned 21, he decided he wanted to make a career out of it and joined the Serra Longo fight team, founded by his coaches, Matt Serra and Ray Longo.

Though he was unsure when his next fight would be because of coronavirus restrictions, Campbell said, he stayed in shape and stuck to his usual daily workout regimen to remain ready.

Charlie Foster, Campbell’s strength and conditioning coach, said he was impressed with his protégé’s commitment and dedication.

“The kid is just, he’s an animal,” Foster said. “He’s a special one. I’ve been training for 20 years in special [operations] and sports, and this kid is just above and beyond. He’s different. He’s special.”

Foster explained that they engage in high-intensity workouts as part of Campbell’s training, which includes plenty of running, working out and sparring. He added that he thinks Campbell will be a champion one day in the sport.

Similar to Foster, Campbell’s striking coach, Eric Hyer, said he was pleased with his client’s progress and his commitment to stay fit even when he was unsure of when his next fight would be.

“It’s really hard for these guys to stay at that pinnacle of shape when they don’t have a goal in mind because it takes a lot of work,” he said. “I’m very proud that he was able to stay disciplined and really stayed in shape. That shows you what he’s made of and I’m very proud of that.”

Campbell said he came in as a heavy underdog based on coming off of a loss and it being his first Bellator MMA fight, while it was his opponent’s third. He added that with no one in the arena, he could hear the announcers talking up his opponent and used that and his underdog perception as motivation.

“It was two very experienced and very high-level kick boxers in there,” he said. “I do believe I’m the more well-rounded fighter and if you run that match up 10 times, I am coming out the winner all 10 times.”

Campbell said he was thankful to his coaches, friends, family members, teammates and supporters and that it made him proud to fight on a national stage and appear in highlights on ESPN’s “SportsCenter.” He said he hopes to once again compete for Bellator in the future, continue his MMA career and he just recently launched a cosmetic business called Octenum, which sells a blend of essential oils and hygiene products.. He also plans to organize virtual training sessions online in the future.

To learn more about his company, visit octenumusa.com. To watch his latest fight, visit bellator.com. To keep up with Campbell, follow or “like” his Charlie “The Cannibal” Campbell page on Facebook.