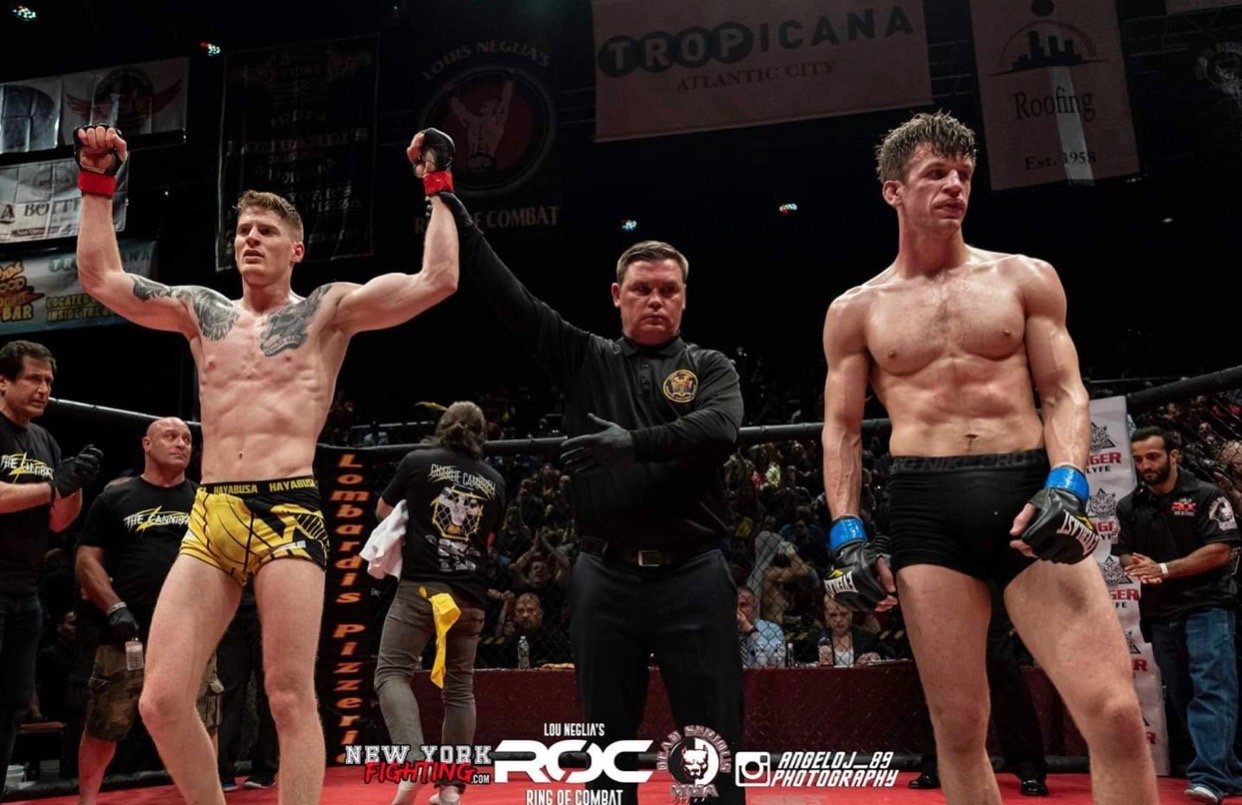 Charlie “The Cannibal” Campbell, left, defeated Cody Zappone in his professional mixed martial arts debut on May 31 at the Tropicana in Atlantic City.
Courtesy Charlie Campbell
By Mike Smollins

With about 250 family members and friends in attendance at the Tropicana in Atlantic City, Charlie “The Cannibal” Campbell did not disappoint in his professional mixed martial arts debut.
Campbell, 23, defeated his opponent, Cody Zappone, 22, by decision after three rounds at Ring of Combat 68 on May 31. The event was sponsored by Lou Neglia & Dead Serious Promotions and streamed on Ultimate Fighting Championship Fight Pass.
“I don’t want to say it was a dream come true because there’s still so much more for me to accomplish in this sport, but it was definitely a moment I’ll remember,” Campbell said. “I just feel so accomplished, but at the same time, there’s still so much work for me to do. This is still just the beginning.”
Campbell is a lifelong East Rockaway resident, and began competing when he joined the Lynbrook Titans wrestling program at age 8. After the Titans program, Campbell began training in jujitsu and kickboxing outside school when he was in ninth grade, and when he turned 21, he decided he wanted to make a career out of it.
With many UFC officials watching the May 31 bout, Campbell said he is hopeful to eventually make it to the Mecca of mixed martial arts. “It’s just a matter of time until I get my chance at the next level,” he said.


Campbell didn’t enter the Octagon at 100 percent in Atlantic City. He said he tore a ligament in his right foot while training for the fight in April. Though he felt lingering effects of the injury, Campbell decided to hold off on getting an MRI until after the fight, and that was when the severity of his injury became known. Campbell said he won’t require surgery, and he planned to rest and ice it over the next three to five weeks. He can’t train, however, because he is in a walking boot.
Campbell said depending on how the injury heals, he was hopeful to have his next fight in September, or January at the latest. He said he learned a lot during his first professional fight and described Zappone as a really tough opponent.
“I couldn’t put him away, and he definitely wanted it,” Campbell said. “He had a tough mentality and didn’t want to give up, but in the end, you have to battle through adversity and find a way to win.”
Campbell, who graduated from East Rockaway Junior-Senior High School in 2013, trained for the fight with the Serra Longo Fight Team, founded by his coaches, Matt Serra and Ray Longo. Longo owns a gym in Garden City with former UFC middleweight champion Chris Weidman, of Baldwin, while Serra owns a gym in Levittown and another in Huntington. Campbell also works with physical trainer Charlie Foster at Gennaro Athletic Club in East Rockaway.
Campbell said he was grateful for the supporters who came out for his professional debut. Before turning pro, the 6-foot-tall, 145-pound Campbell was 5-0 in amateur MMA fights and 6-1 as a semi-pro kickboxer. He said he was pleased to find success in front of a contingency of supporters.
“It just means so much to me because the hard work paid off,” he said. “I’m just so happy I was able to bring all those people together and make everyone proud and represent East Rockaway. I’m really happy those people came out and I got the job done.”
To keep up with Campbell, follow or “like” his Charlie “The Cannibal” Campbell page on Facebook.
Report an inappropriate comment