A musical tale of America's immigrants on stage at Hofstra 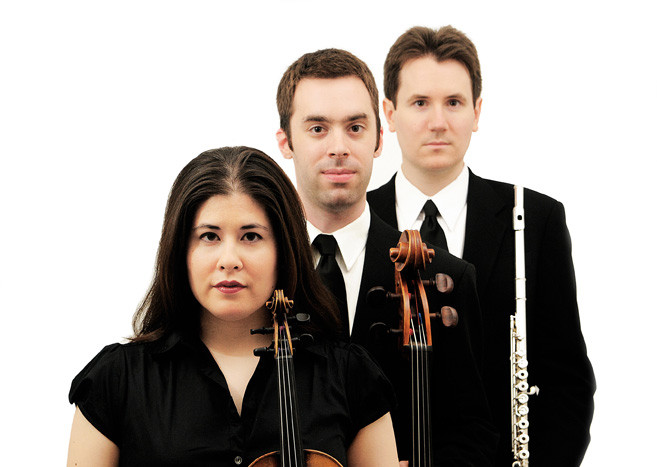 The story of American immigration unfolds on stage through the music of Silver Roots, an ensemble of three young New York City-based classically trained musicians, who have created a vibrant program that reflects the nation’s cultural melting pot. Silver Roots brings its program, “Echoing Voices: A Musical History of America,” to Hofstra University’s Helene Fortunoff Theater, on Sunday, as part of the Joseph G. Astman International Concert Series.
As waves of immigrants the world over arrived in New York Harbor and on the shores of America with bright hopes and big dreams in a new land, they built a new vibrant identity for America. Through the immigrants’ stories – and music – they contributed a unique sound and a fresh energy to their American surroundings.
That experience and cultural impact comes alive as interpreted by this innovative ensemble, composed of violinist Maria Millar, flute player Shawn Wyckoff, and cellist Michael Haas. The trio, who originally created this program for Lincoln Center’s “Meet The Artist” series in 2009, brings this imaginative concert to Long Island audiences in their first performance on the Hofstra stage.
The ensemble guides the audience through entertaining tales of the immigrant experience in America through a riveting soundtrack of improvised and traditional songs – ranging from European to Middle Eastern to Asian and Latin American compositions.


The three musicians fuse story, acting, and music together to create this unique look at the immigrant experience in American history, allowing all to hear those “Echoing Voices” of the nation’s heritage.
“For over 10 years we’ve been playing different forms of world music,” said Millar, a native of Edmonton, Alberta, Canada, who founded Silver Roots, along with Wyckoff. “We thought it would be interesting to base a program on immigration through Ellis Island and show how the face of immigration changed, starting with the Dutch, Irish and Germans, all the way through the 20th century.”
The show evolved out of the trio’s musical philosophy, which is to engage audiences in all aspects of their concert programs. “We make it extremely interesting and involve our audiences,” Millar said. “We are all about people understanding and enjoying music.” Millar, who graduated from Juilliard in 2001, has performed throughout the world and also played the role of the fiddler in Riverdance.
She and Wyckoff, who graduated from Juilliard in 2002, have been playing music since their childhoods and met at the school before embarking on their musical partnership. The third member of their group, Haas, graduated from Juilliard in 2008.
“Silver Roots lives in the continuum between classical and world music,” Millar explained. “Silver Roots performs revolutionary, customized programs that draw from a mix of classical and world music, improvisation and ground-breaking original works. Communication is the driving force, whether through masterful execution and interpretation, conversations with the audience, sharing the history behind the music or even song and dance.”
Sunday’s program includes the music of 12 regions – the Netherlands, England, Ireland, Germany, Scandinavia, Russia, Italy, Puerto Rico, Egypt, Japan, China, and the U.S. “We draw from the unknown to music people have heard,” Millar said. “We end it all with American fiddle tunes so people can hear music
from here.”
Not your typical concert experience, Silver Roots programs are audience-friendly, interactive experiences. The trio’s approach encourages audience input; they often engage in dialogue with their audiences, frequently improvising their programs as they go along.
“We often have people who come up [on stage] and participate,” Millar said. “We like to connect and engage our audiences. We are less formal and structured. We want to get rid of the barrier between seats and stage and maintain an ongoing dialogue with
everyone.”
Echoing Voices involves five segments, with narration by Wyckoff. The introductory portion delves into why people come to America – starting with the present-day, then transitioning back to the 1600s when New York City was first settled by the Dutch, then taken over by the English. Part 1 focuses on Europe from 1840 to 1930 when the Irish and Germans, then Italians and Russian Jews came to America in two waves. Part 2 explores Latin America from 1930 to 1965, when Puerto Ricans and Latin Americans arrived here. Part 3 focuses on Asia from 1965 through the present day, as South Asians, East Asians and Middle Easterners embarked on a new life. The concert concludes with a look at the overall impact of the immigrant experience, often including a question-and-answer session with the audience.
The entire program is experienced through the sounds of the musicians and their three instruments: violin, flute and cello. “The goal of this pared-down format is to use music and stories to create a visual, multimedia experience inside the mind,” said Millar. “We want the audience to have fun and leave feeling like they haven’t heard anything like this.”