Elmont LIRR station is on its way as questions remain 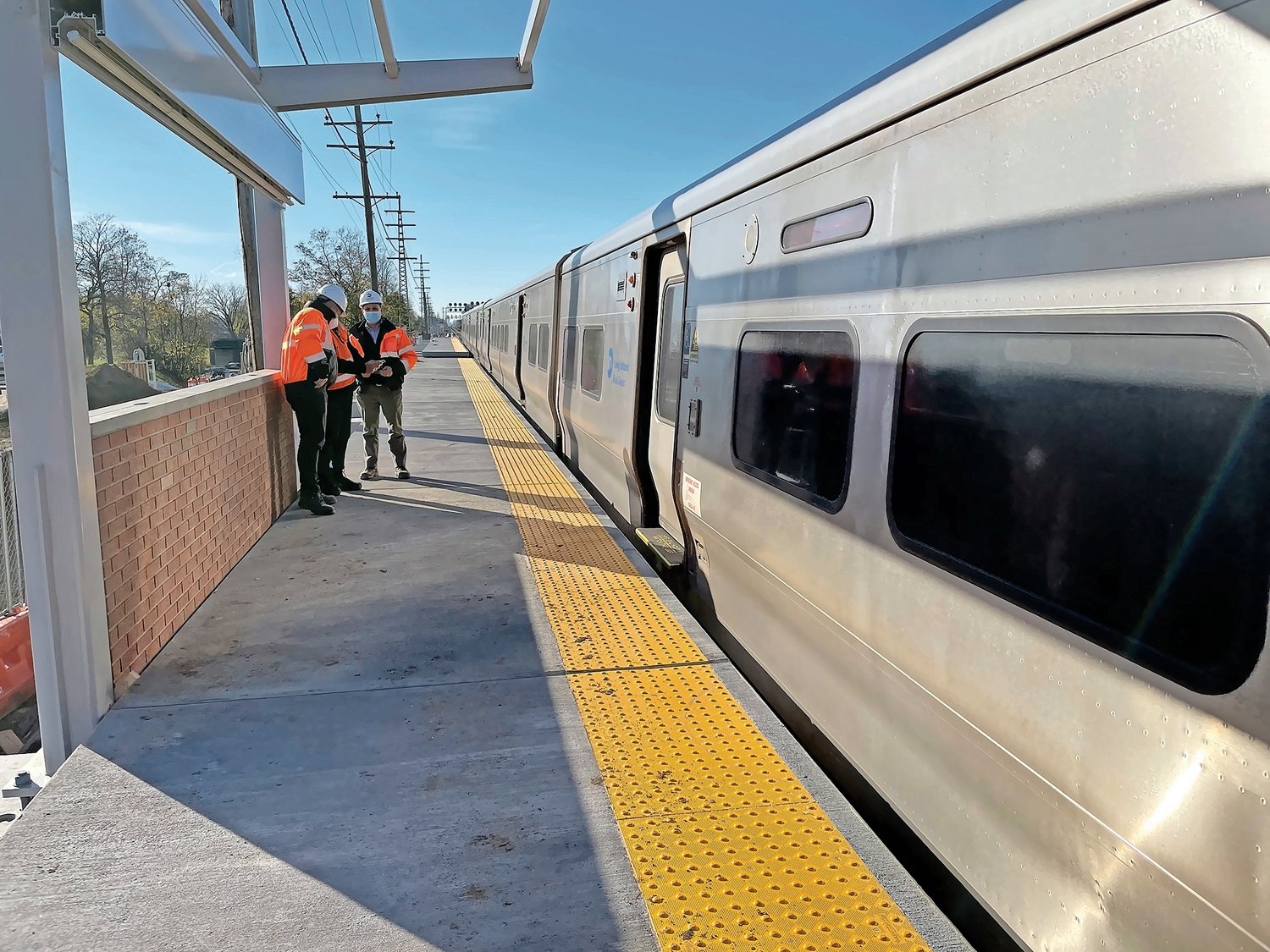 Sections of the south platform of the new Elmont LIRR station have recently been installed.
Courtesy Metropolitan Transportation Authority
By Melissa Koenig

With 11 months to go until its scheduled opening, Metropolitan Transportation Authority crews have completed the first major milestone in the construction of a new Elmont Long Island Rail Road Station, installing precast platform sections for eastbound trains in the North Lot of Belmont Park.

The station will serve riders on the Hempstead line, and will be halfway between the Queens Village and Bellerose stops. It will feature a pedestrian overpass, free Wi-Fi, digital screens, elevators, canopies, charging stations and shuttle buses for those heading to the new UBS Arena. One hundred fifty parking spaces at the station will be set aside for Elmont residents.

“The Elmont LIRR station will provide a critical public transit link for both neighborhood commuters and fans attending the new Belmont Park arena,” Jack Sterne, a spokesman for Empire State Development, a state agency that promotes development, said in January. “This will be the first new, full-time commuter LIRR station built in decades, and it will provide a real benefit for Long Islanders through an innovative public-private partnership.”

The development of the station was included in the state’s plans for the arena, and arena developers agreed to cover 92 percent of the cost of the $105 million project, with the state providing $8 million in funding.

Last September, the MTA board added the project to its 2015-2019 capital plan, with the understanding that ESD would transfer $105 million from its budget to the transportation authority. ESD will contribute $75 million, with developers New York Arena Partners adding $30 million up front and reimbursing the state interest-free over the next 30 years, according to former Federal Transportation Administration official Larry Penner. The project is now fully funded, MTA officials said.

Work on the station began in July, and crews are now in the process of installing underground utilities, moving existing utilities, and building a structure to support a pedestrian bridge over the Cross Island Parkway, according to MTA officials.

But, Penner said, there is still a lot for MTA officials to figure out before the south platform, which will serve eastbound trains, opens next October. The north platform, for westbound trains, is scheduled to open by the end of 2022.

“Just installing the platform on the southbound side is the tip of the iceberg,” Penner said. “It’s the first chapter of a long book.”

There have been no announcements about who will purchase, operate and maintain a fleet of shuttle buses that will serve 3,000 to 5,000 riders, he pointed out, and the bus manufacturers already have a backlog of up to two years for orders for other transit agencies.

Additionally, Penner noted, these riders will also have to pay higher prices for LIRR tickets. Rates were already set to increase under the MTA’s 2020-24 Five Year Capital Plan, which was approved last year, he explained, but may increase up to 4 percent more if the federal government fails to allocate the $12 billion agency officials say they need to continue operations. The MTA is also considering cutting service on New York City buses and subways and the Staten Island Railway by 40 percent, Chairman Pat Foye announced on Nov. 18, and service on the LIRR and Metro North by 50 percent.

And to get to the Elmont train station, Penner said, many commuters will have to change trains — something commuters don’t like to do, he said, when they pay high ticket prices.

Babylon, Speonk, West Hempstead, Long Beach and Far Rockaway branch riders will always have to transfer at Jamaica, he said, and riders on the Port Jefferson, Huntington, Oyster Bay and Ronkonkoma lines will have to do the same until the westbound platform and the pedestrian bridge are completed in 2022. Riders on the Port Washington branch will also have to transfer at Woodside.

Given all of these obstacles, Penner estimated that 95 percent of those who attend Islanders games, concerts and other events will elect to drive or take a car service rather than ride the LIRR to the new station.

“Completion of construction of the eastbound platform . . . is a great early interim milestone,” Penner said, but added, “Let’s see what occurs over the next two years, between construction of the westbound New York City platform, overpass, elevators, actual station waiting room, shuttle bus service area, frequency of service and fare structure, to see if it was worth the investment.”