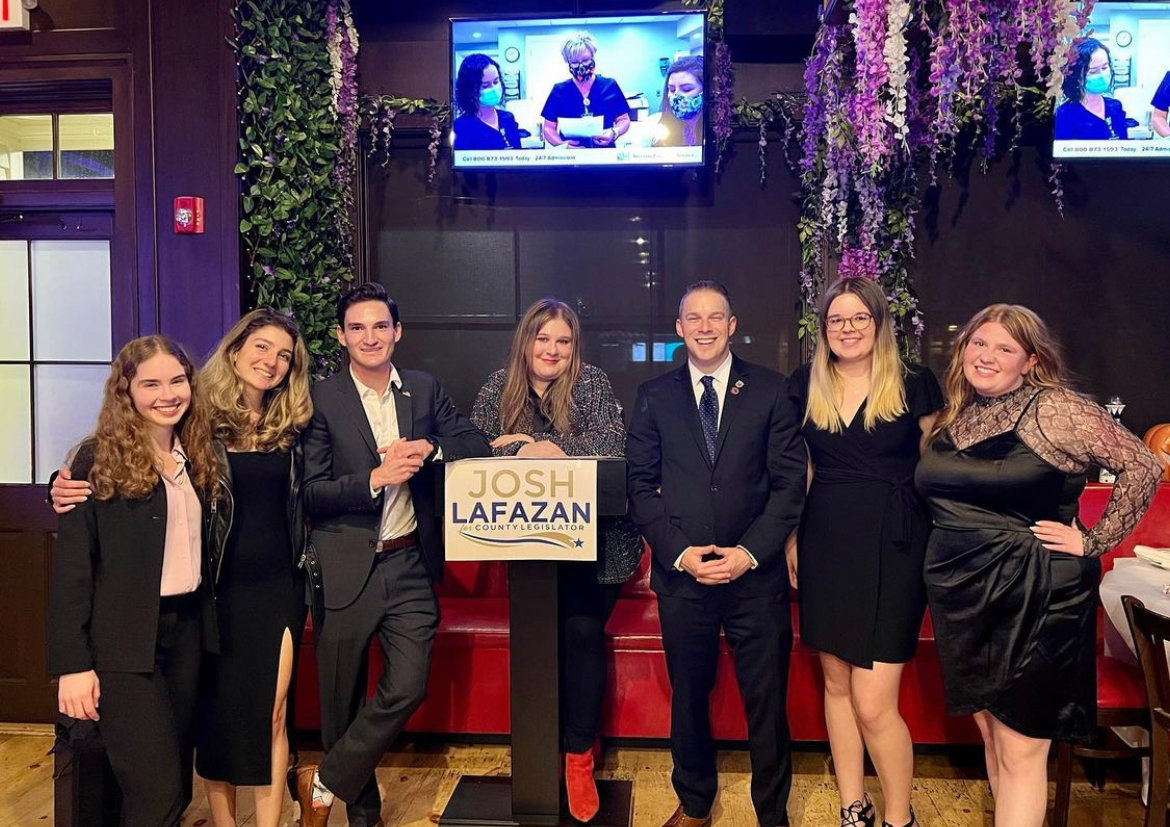 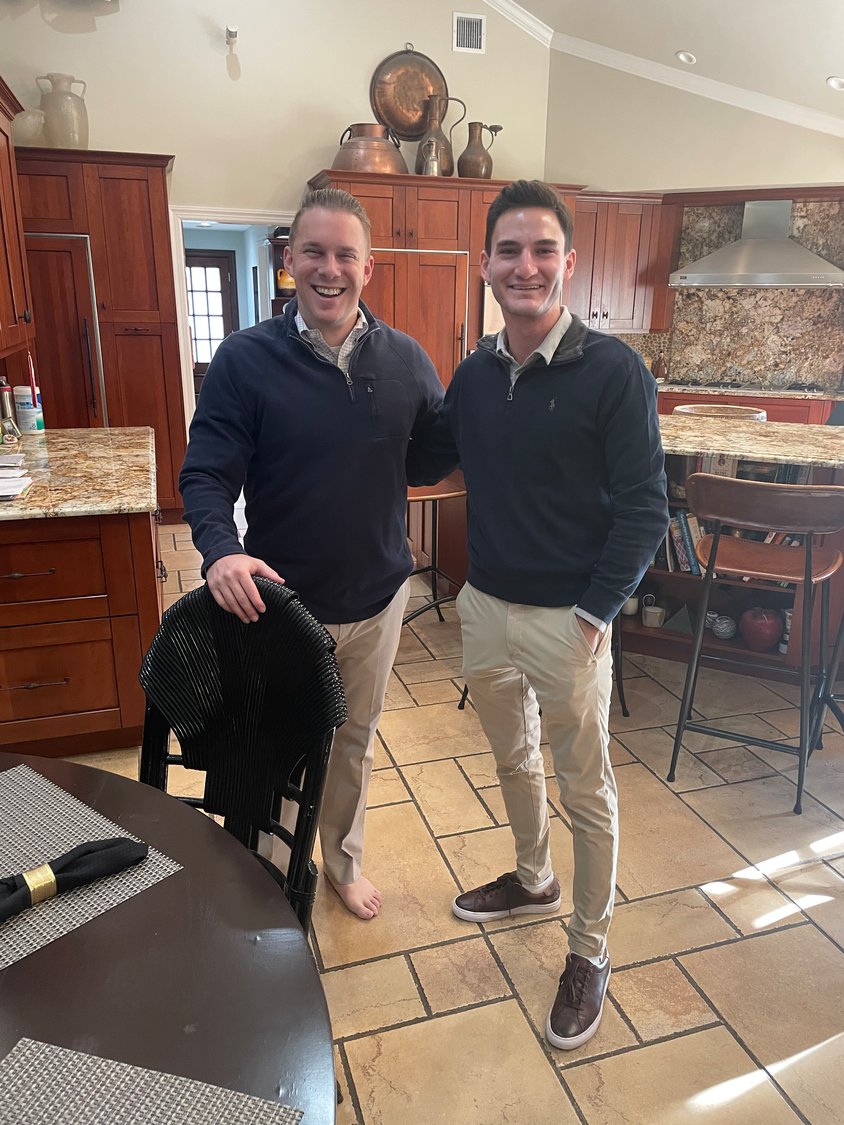 Legislator Josh Lafazan, left, in his bid for Congress, has hired a campaign staff filled with people in their early to mid-20s. Chase Serota, of Brookville, manages the campaign.
Courtesy Josh Lafazan
Previous Next
By Laura Lane

Josh Lafazan has a mantra: The dearth of original ideas in politics is staggering, yet he is the exception to the norm. It’s been too convenient for politicians to sit back, critique, and then attack each other. That’s not his style.

The three-term Democratic Nassau County legislator takes this philosophy with him when he’s knocking on doors, speaking to would-be voters. He focuses on why he deserves a vote, not why his competitors do not.

“Campaigning is a brutal business,” Lafazan said. “When I knock on doors, people express their appreciation that what I talk about is what I’ve done — and what I can do — for them.”

Government should be energetic and optimistic, the 27-year-old from Woodbury added. He has managed to pass more bills — 14 — than any of his colleagues in the Legislature. Now it’s time, he said, to make a run for Congress to claim a seat left empty by Tom Suozzi, who wants to become governor.

Having begun his service at 23, Lafazan is the youngest ever to hold a seat on the Legislature. His staff members are a reflection of his beliefs — and also his age, with the core group in their early to mid-20s.

“Loyalty is important to me,” Lafazan said, adding that everyone on his campaign staff interned for him. “I’m a big believer of growing a team from within, and of giving young people the ability to serve. They have unlimited potential but limited opportunities. We are a family.”

His internship program, where the average age is 16, is costly to operate, he said, but worth it. Interns research policy, leverage media to reach new voters, and actually speak to voters.

“It’s so unique to have someone that age speak to a voter,” Lafazan said.

There are plenty of horror stories about how politicians treat their staff.

“For us, it’s respect,” he said. “An equal voice, and a collegial environment.”

Chase Serota is 22, but has already managed two Lafazan campaigns, and is now focused on a third. The Brookville native has been successful — Lafazan captured nearly 70 percent of the vote in 2019, and last year survived a “red wave” that swept many Democrats out of office, winning re-election in a district that supported Republicans — including Donald Trump and County Executive Bruce Blakeman.

Serota was one of 70 interns when he first met Lafazan in 2018, but already knew all about him. Lafazan had won a seat on the Syosset School Board at 18, becoming the youngest elected official in New York. Inspired by Lafazan, Serota created a student board representative seat on the Jericho High School Board of Education when he was still a senior.

Serota was impressed from the get-go by Lafazan’s ability to inspire others to become involved in their community. Many of Lafazan’s interns have gone on to run for student government in high school and in college, Serota said.

“What has motivated me is what motivates most people in his internship program — the power of using your voice to represent people,” Serota said. “And that you can make a change.”

The son of Brookville mayor Daniel Serota, Chase said he had always been interested in government and politics. He began attending Brookville Village board meetings when he was 10, but never guessed he ultimately would become a campaign manager.

Yet that’s exactly what Lafazan asked Serota to do in his 2019 re-election campaign for legislator. Lafazan sought another young person who wanted to go the extra mile.

Isabella Skvarla was one of Lafazan’s interns in 2019. A junior at American University, the 21-year-old lifelong Oyster Bay resident has become so involved in Lafazan’s campaign, she was forced to take a semester off.

What impressed her most about Lafazan was his humility, she said. He has a bachelor’s degree from Cornell University’s Industrial and Labor Relations School, and a master’s degree in education policy and management from Harvard Graduate School of Education.

As a legislator, he’s accomplished a great deal at a young age, Skvarla said. “He is so casual about it. He never makes a big deal about it, but focuses on helping young people find their voice, get empowered, and involved in politics.”

Skvarla canvassed for Lafazan that first summer, returned to college, but came back a week before Election Day, canvassing again.

By the time she returned to school that winter, Covid hit. Back home, she kept up on her classes virtually while also running Lafazan’s college internship program.

“For me it was a great leadership experience,” Skvarla said. “There were 150 interns.”

Last year, Skvarla moved up to become Lafazan’s deputy campaign manager. She’d work during the summer, and then return to college in the fall, shrinking her school schedule to just four days a week. She’d leave after her Friday class, boarding a train to New York, and then return on that same train every Monday.

“It wasn’t easy, but I think it was worth it,” Skvarla said. “I learned about time management working on the campaign and school both at the same time.”

She also learned about flexibility and making sacrifices — like no longer seeing her friends. Then, after Lafazan was re-elected, Serota asked Skvarla if she would like to join the congressional race as a field organizer. She accepted, but this time chose to take a leave of absence instead of trying to balance both.

She’s in charge of Lafazan’s social media, which allows her to be more creative than organizing or canvassing. She is also working on formulating an upcoming internship/volunteer program.

Brianna Solomon is Lafazan’s field organizer. It was her younger brother Gavin — just 17 at the time — who convinced her in 2019 to become one of Lafazan’s interns.

Her first impression? Lafazan was open and friendly — not what she had expected from a politician.

“From the moment I met him, I felt like his friend,” Solomon said. “He encourages us to say what’s on our mind, and has the utmost faith in our abilities.”

Solomon interned at the Legislature in the summer of 2020, researching proposed bills. When she returned to college, she continued working remotely for Lafazan until she graduated.

Interning and working for Lafazan, Solomon said, made her more confident and improved her legal writing as she continues to consider law school.

“Part of the reason I want to work for him is because, as a young person, it’s hard to see the state of the world right now,” she said. “I see him as someone who genuinely cares about his community and gets things done. We need someone who wants to help people.”