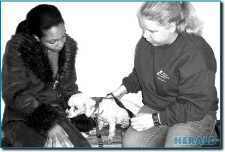 By Mary Malloy
"She was the first one I saw," said Pogozeski. "I just fell in love with her." Kelli was one of hundreds of hopeful adopters who lined up at North Shore Animal League in Port Washington last Friday in hopes of bringing home a cuddly canine.
"We saw on Channel 12 how these dogs were rescued from Virginia and would be ready for adoption today," said Pogozeski. "We came last night at 9 p.m. and camped out with hot chocolate, pillows and blankets. We were ninth in line." The doors opened at 10 a.m. the next morning.
Earlier this year, The Humane Society of the United States conducted a five-month investigation into a puppy mill in Hillsville, VA, and, as a result, local officials were able to shut the mill down. According to North Shore Animal League Vice President of Operations Joanne Yohannan, it was quite possibly the largest puppy mill in the state of Virginia, housing more than 1,100 animals - and it was the largest supplier of animals to pet stores in that area.
On November 8, North Shore Animal League America embarked on a rescue mission to help the HSUS save these endangered dogs, who are six months and older, bringing as many of them to the safety of the League as possible.
Once at the League, the dogs' physical, emotional and medical needs were taken care of, which included health and behavior evaluations, vaccinations, grooming and the spaying and neutering. The newest residents consist mainly of small pure breeds and mixes such as Malteses, poodles, chihuahuas, Yorkshire terriers, Jack Russell terriers, beagles, Lhasa Apsos, West Highland white terriers, shih tzus, and bichon frises.
Akilah Howard, 25, of Lakeview, came to the League when she heard about the rescue last Wednesday, but had to return two days later because the dogs were not ready then for adoption. Howard soon bonded with Precious, a poodle. "She will meet Prince and Princess, my toy and standard poodles waiting at home." Once Howard's application was approved, she was given instructions by the League's Veterinary Technician Glyne Greenidge, and some tips from Trainer Kim Lasek.
Baldwin resident Linda Bakal never thought she could find a replacement for her family dog, Sebastian, a 13-year-old German shepherd mix who died last December. She and her son, Michael, missed having a dog around the house, and came to the League in the hopes of finding a new companion.
"I saw her, and just fell in love with her," she said about the multicolored Yorkie mix she soon named Isabella. "She is the cutest little thing. She will be a great addition to our family."
Comments about this story? Mmalloy@liherald.com or (516) 569-4000 ext. 202.
Photos by Mary Malloy/Herald