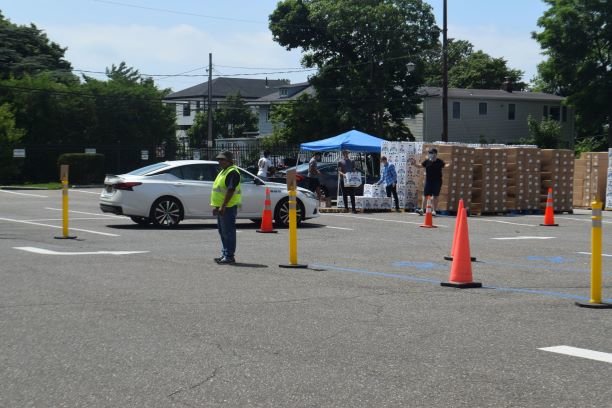 Motorists were directed to one of four lanes for produce pick up at the Gural JCC’s free food distribution on July 15.
Jeffrey Bessen/Herald
SUPPORT LOCAL JOURNALISM

Vehicles lined Central Avenue from Rockaway Turnpike to Winchester Place in Lawrence inside the first hour of the July 15 free produce distribution coordinated by the Marion & Aaron Gural JCC and Gabriel Boxer, known to many as the “Kosher Guru.”

Pre-registered motorists were directed to one of four lanes where volunteers and paid staff placed the correct number of boxes of food in the vehicles as they drove through the parking lot of the Harrison-Kerr Family Campus. Walk-ups had their own pickup spot on Winchester Place.

Food being given to people has become a regularly scheduled activity in the Five Towns as the coronavirus pandemic has caused economic upheaval with businesses being closed and the associated unemployment, along with many not leaving their homes as frequently to shop.

“We’ve always said that there is food insecurity in the greater Five Towns and the demand for this produce … this clearly demonstrates that there is a true need for food,” Stacey Feldman, associate executive director of the Gural JCC said as vehicles drove through the lot to pick up the boxed produce. “The amount of emails and phone calls that we receive  begging to be placed on the list clearly shows us that is not just people who like to get a box of free produce.”

Just over 1,650 people initially registered for last week’s giveaway, Feldman said, but because the organizers were able to obtain another 1,500 boxes of fruit (with 22 pounds in each), roughly 3,200 people from the Five Towners as well as people from Oceanside, West Hempstead, Great Neck, Far Rockaway and other areas of Queens received a box.

Feldman noted that since the pandemic began, the JCC has seen an increase of 40 percent in people using its Rina Shkolnik Kosher Food Pantry that is part of the Sustenance Hope Opportunities Place in Cedarhurst. “Also through the registration system we are able to ask if people would like information on our Rina Shkolnik Kosher Food Pantry and to date we have about 2,400 people that checked yes, and are now waiting to an intake meeting with our social worker Dali Abott at the food pantry,” Feldman said.

Boxer, a Hewlett resident, in the early days of the pandemic launched Kosher Response that delivered food to frontline workers such as health care personnel, police and other emergency responders. His Kosher Response initiative now includes gift cards that are purchased from local restaurants and given to families so they “get food with dignity,” he said. His “Kosher Guru” moniker derives from his background in the kosher food industry and his work as a consultant.

“It’s beautiful, the delivery to the cars, no matter the race, creed or religion everyone says thank you,” Boxer said about the free food fests. “Whether it’s the elderly or young families starting out everyone is welcome. We cannot judge. We don’t know what their situation is.”

The free food is made possible by many community sponsors on July 15 it was Signature Bank. On July 22 it was the Harrison Kerr family, along with the Leon Mayer Fund and Community Chest South Shore.

Cal Nathan, president of Community Chest, said that working with Boxer was a natural extension of what his organization, a longtime supporter of the JCC, has done through the years in helping and supporting the community. “Gabe has been fantastic, elevating people, elevating the community, making an impact,” Nathan said, adding that Community Chest aims to be relevant and after defining the organization’s core values and undergoing a rebranding from Five Towns Community Chest a few years ago, the 89-year-old organization is “looking to make an  impact, innovate and work with the next generation of leaders,"  which Boxer exemplifies, Nathan added. ”Putting food on the tables of those in need is near and dear to our longtime members.”

Boxer said that the registration for the July 22 food fest was filled within hours of opening on Sunday night. He noted that people should continue to sign up as more food could be on the way and people are made aware of the JCC’s services. “I’m a fighter for the community and I’ll try to do this as long as possible,” Boxer said.

Understanding that many people have been homebound for the past few months is the reason the food giveaway is not limited to people that could be considered in need, Feldman said. “We know that it’s a very uplifting ting to come out of your house and in safe, socially distanced manner and pick up a box of farm fresh produce,” she said. “It is something that has been uplifting for the entire community. We value the relationship with Kosher Response and we look forward to doing many more produce fest and food fests in the future.”