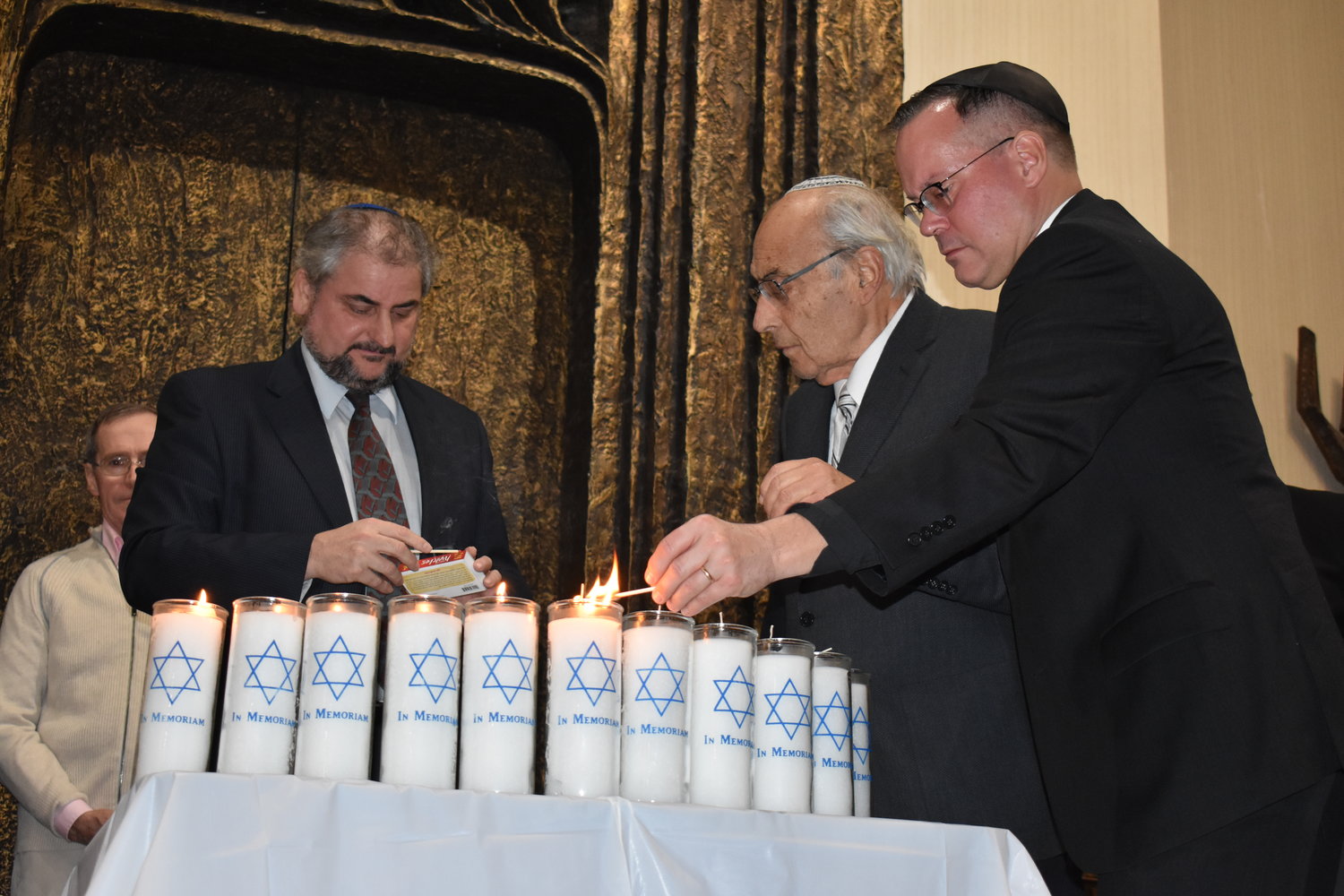 Candles were lit for each of the victims of the shooting at the Tree of Life Synagogue in Pittsburgh, from left, Rabbi Claudio Kupchick of Temple Beth El, center, Rabbi Arnold Marans of the Sephardic Temple and Father Christopher Ballard of Trinity-St. John’s Episcopal Church.
Tyler Marko/Herald
By Tyler Marko

“There are very few ways to fight hate, except through love and unity,” said Rabbi Steven Graber of Temple Hillel in North Woodmere. “We’re here together hoping that it will somehow help us to start to heal as well as to be able to send a message to the families of the victims as well as the rest of America that we care.”

On a night when many other people were taking part in the customs of Halloween, more than 400 people were confronting a much scarier set of circumstances at a prayer vigil hosted by Temple Hillel. The event was in honor of the 11 people who were murdered at the Tree of Life Synagogue in Pittsburgh on Oct. 27. Six people were injured, including four police officers

There were clergy from, and congregation members from local houses of worship, including Temple Beth El and Sephardic Temple, both in Cedarhurst, Congregation Sons of Israel in Woodmere, Young Israel of North Woodmere, the Presbyterian Church of Valley Stream, Masjid Hamza Mosque of Valley Stream, Trinity-St. John’s Episcopal in Hewlett Church.

The speakers, which included both the clergy and local elected officials, reiterated the theme of unity regardless of everyone’s different backgrounds. “This is more about being an American than anything else,” said Father Christopher Ballard of Trinity-St. John’s Episcopal Church. “We all come from different faiths, different backgrounds, different denominations of Christianity, of Judaism, of Sikhism, of Islam. We are here together because we are part of a society that believes in the unity and freedom of religion in this country.”

Gohar Ayub, a representative from the Masjid Hamza Mosque of Valley Stream, said that he lives around the corner from Temple Hillel and was there first as a neighbor. “We are here to stand with you and to let the Jewish communities know you are not in this alone,” he said. “This is not the time to fuel the fire and to take advantage of the situation to score political points. This is the time to put a hand on each others shoulders, to stand up together and unite to fight this bigotry.”

Robert Bowers, the suspected shooter had a history of posting phrases and conspiracy theories used by white supremacists on social media. In the weeks leading up to the murders he wrote anti-Semitic posts directed at the Hebrew Immigrant Aid Society, that provides humanitarian aid and assistance to refugees, an organization that the Tree of Life Synagogue supports. He reportedly claimed that HIAS were aiding members of caravans that originated in Central America and are heading north to seek asylum in America, and that the members of the caravan were “invaders” brought to the United State to kill white people by Jewish people.

The attack was the deadliest attack on the Jewish community in the history of the U.S. In a show of support, Graber urged all attendees to visit a synagogue over the weekend of Nov. 2-3 to show solidarity for Pittsburgh residents and the Jewish community at large.
Woodmere resident Eli Dworetsky supported Graber’s request “People should go on and live and be connected to their family and their religion,” he said, and go to synagogue.”

Maddi Lavin, of Hewlett, expressed her hope that this mood of unity remains. “[After 9/11] There was a very strong sense of unity and togetherness,” she said. “I hope this will last. It faded with time, but maybe this will be an ongoing reminder.”
Report an inappropriate comment