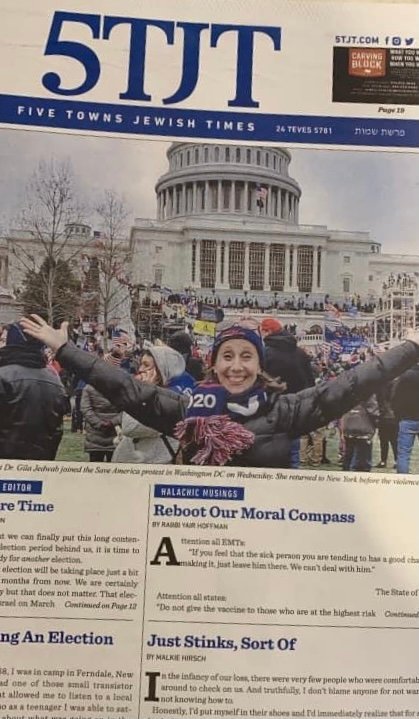 The fallout from the Jan. 6 assault on Capitol Hill is having a local impact.

A pair of Five Towns synagogues have sent letters to the Five Towns Jewish Times admonishing the Orthodox Jewish newspaper for printing what appears to be a celebratory photograph of Cedarhurst dentist Dr. Gila Jedwab outside the Capitol building in Washington, D.C., on the day that the violence broke out there, resulting in five deaths, destruction of government property and the arrest of more than 80 people.

Jedwab is also a columnist for the publication. The shuls, Congregation Beth Sholom in Lawrence, the first Orthodox Jewish synagogue in Nassau County and Young Israel of Woodmere, the largest Orthodox congregation on the South Shore, requested that the 5TJT halt delivery to their shuls.

“We strongly object to your posting of Gila Jedwab with her arms extended in a welcoming fashion during the despicable event in front of the nation's capital together with all its negative ramifications,” Young Israel stated in the letter signed by Stuart Wagner, president of the synagogue’s board.

The Congregation Beth Sholom letter signed by Rabbis Kenneth Hain and Avi Miller, the synagogue’s president Barry Gurvitvh and chairman of the board Alan Heller, called having the photo as the lead story on the front page “irresponsible and reflects a disregard of our community’s values.”

“Wednesday's events cannot credibly be captioned as a ‘protest’ and should absolutely not be painted in a positive,” the letter stated. "This is especially true of an outlet which professes to be a voice of our community.”

After the fallout, Five Towns Jewish Times Publisher Larry Gordon posted an editor’s note on the paper’s website apologizing for printing what he called “a terrible damaging message.”

“At the end of the day, even though many people contribute to making this newspaper possible on a weekly basis, an error in judgment like this is my exclusive responsibility,” Gordon stated. “To the extent that you were offended, I reiterate my apologies and will endeavor that we are more sensitive and careful and that a situation like this is never repeated.”

Jordan Silver of the Long Island Jewish Community Forum posted a strongly worded disapproval of the Five Towns Jewish Times' actions on Twitter and called for “the immediate resignation and condemnation” of Jedwab.

There were supporters of Jedwab and the newspaper, including Woodmere resident Michal Weinstein, who along with Jedwab organized a pre-election pro-Trump rally in Woodmere in October.

Calling the delivery stoppage a part of "cancel culture," Weinstein posted a lengthy criticism on Facebook. Cancel culture is defined as a contemporary form of ostracism either socially or professionally, either in everyday life or online through social media.

Referring to the synagogue’s decision to pull the paper because of the photo and what it represented, Weinstein wrote, “Our shuls decided it was outrageous enough to deserve public retribution and cancelation. This not only named Gila publicly but also appeared to imply that the mere act of attending the rally was criminal. Now to be fair, I get that picture of the rally in front of the [Capitol], after what went down, can seem insensitive.”

Jedwab also posted on Facebook an account of her participation in the initial “Save America” protest that turned violent. Saying that she was “horrified” after seeing footage of the violence, she wrote, “I have learned many things in the past few days. I have learned that one man’s chillul Hashem (desecration of God’s name) is another man’s kiddush Hashem (sanctifying God’s name). One man’s villain is another man’s hero. It all depends on what lens you look through.”