Student-athletes return to the field for some fun 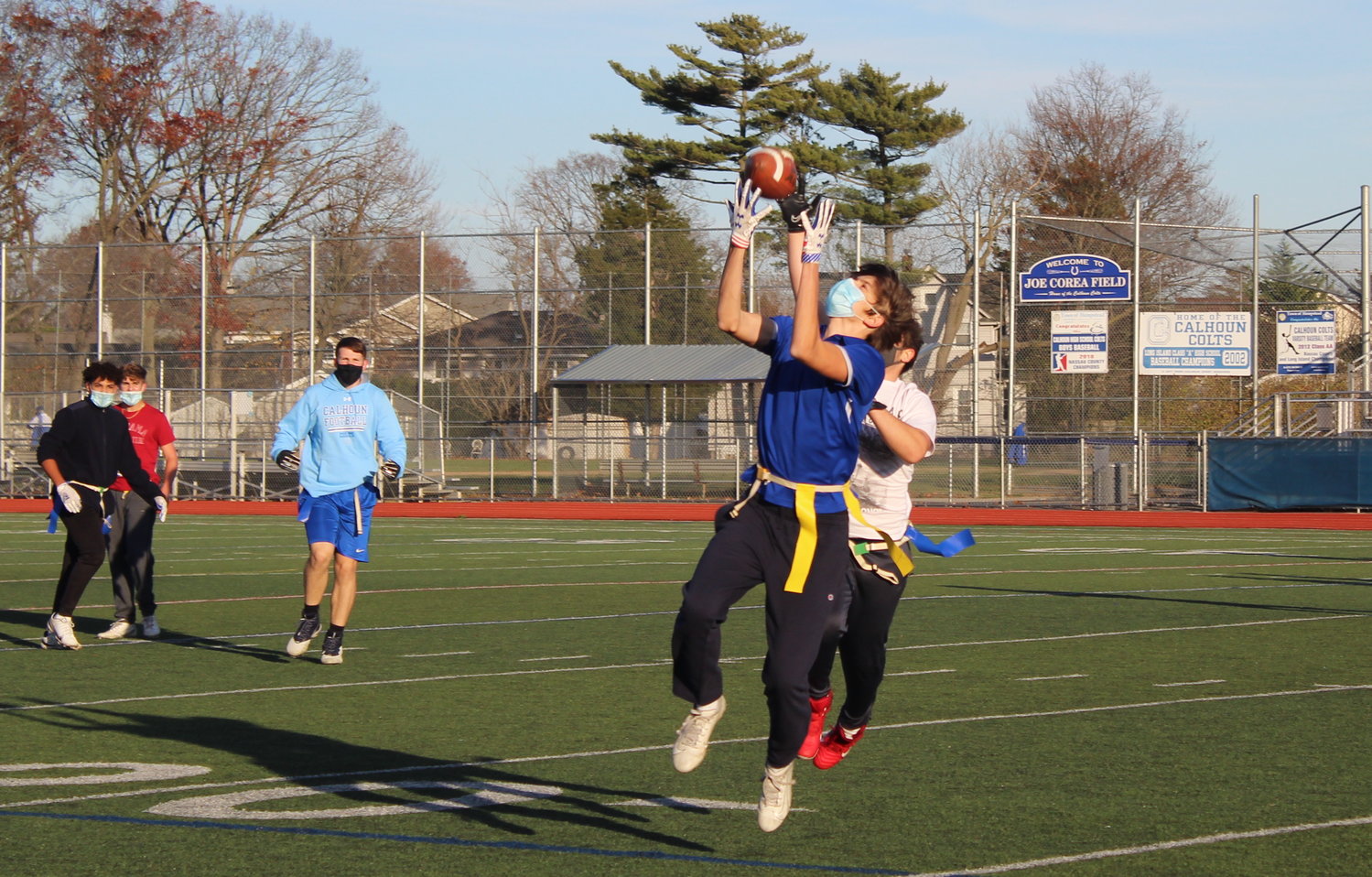 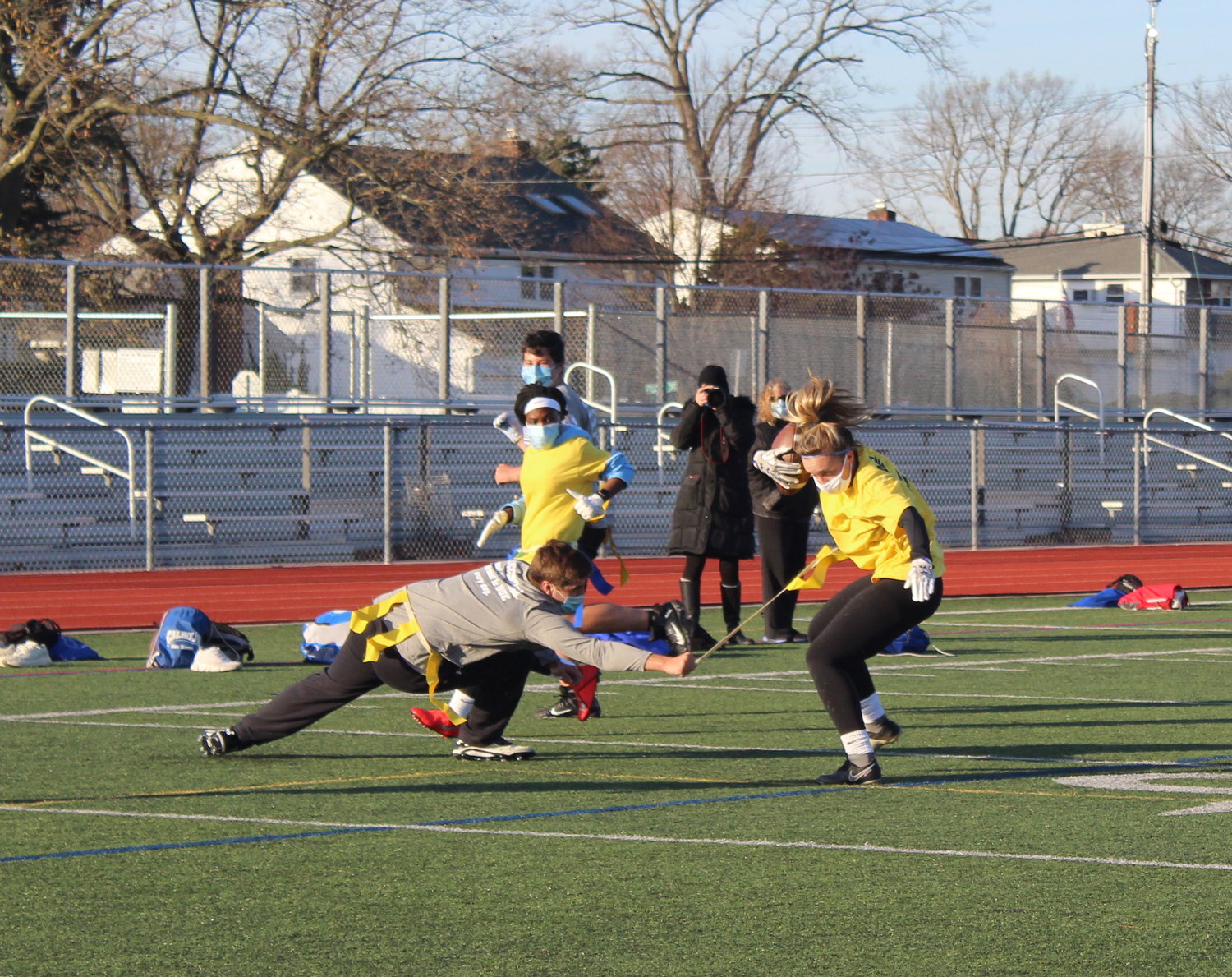 Calhoun’s kicker, senior Nicole Devlin, right, attempted to evade her opponent during one of the games.
Alyssa Seidman/Herald Life 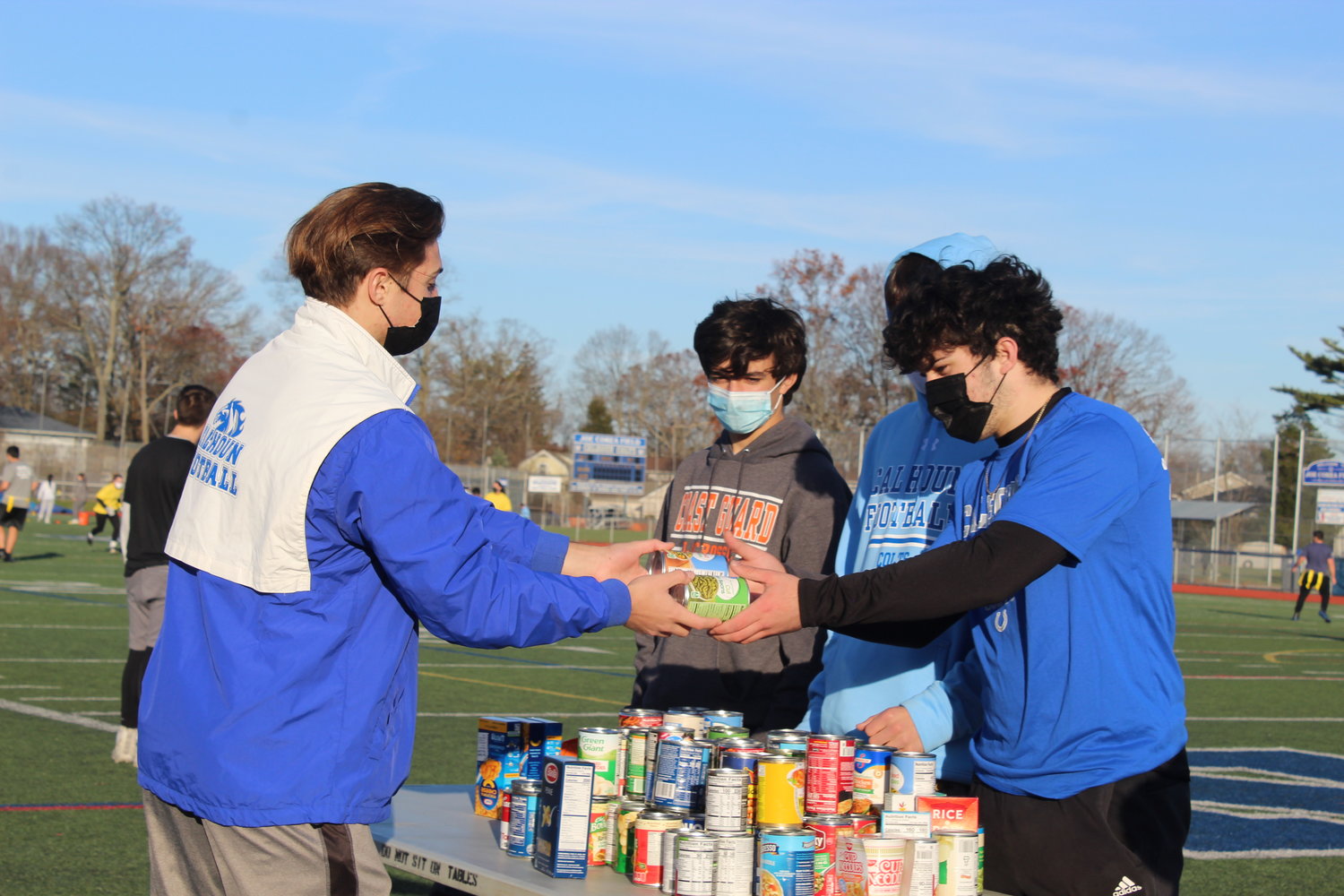 Each participant was required to donate two non-perishable food items as their entrance fee into the tournament, collecting more than 50 pounds of donations for the Community Cupboard.
Alyssa Seidman/Herald Life 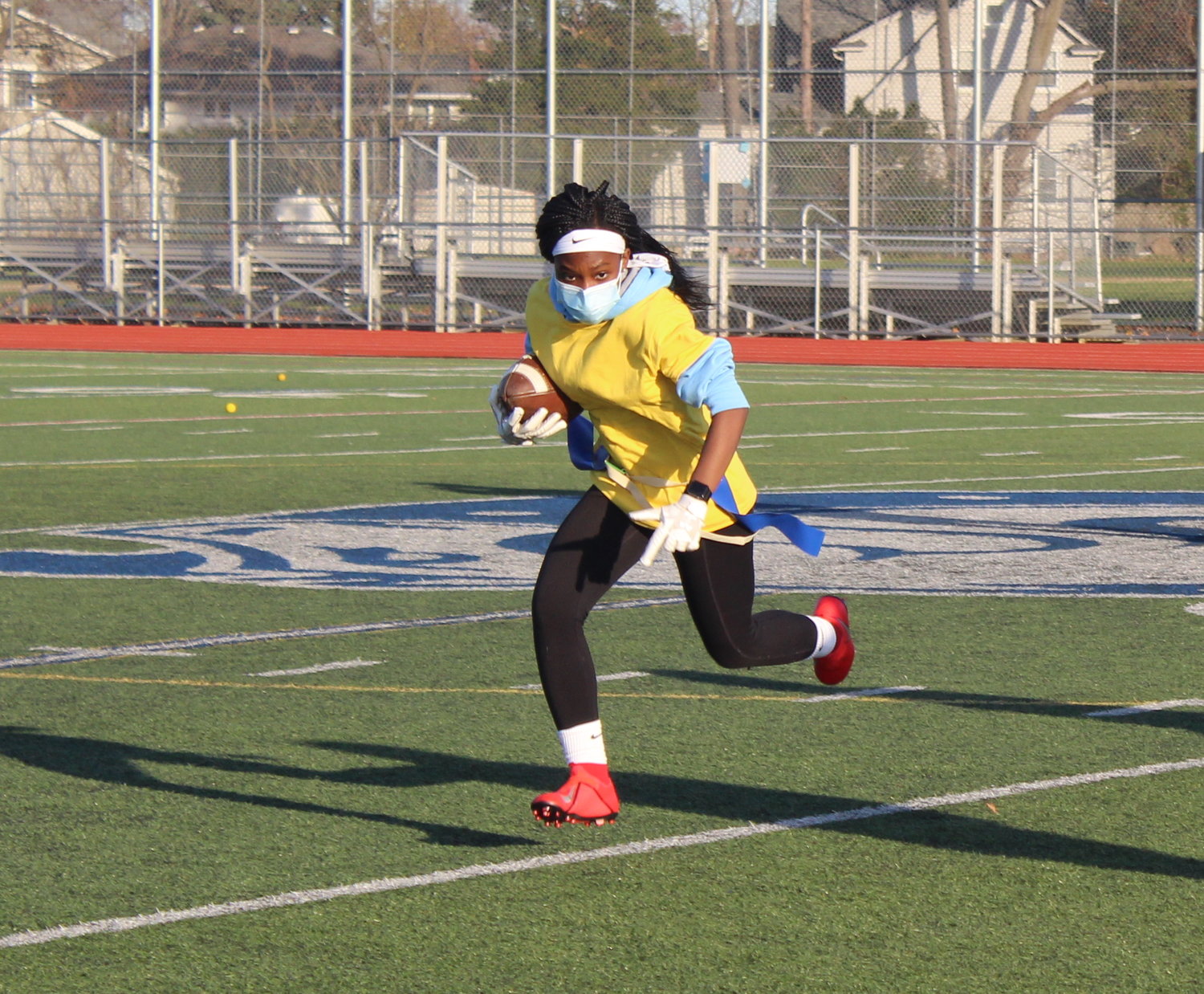 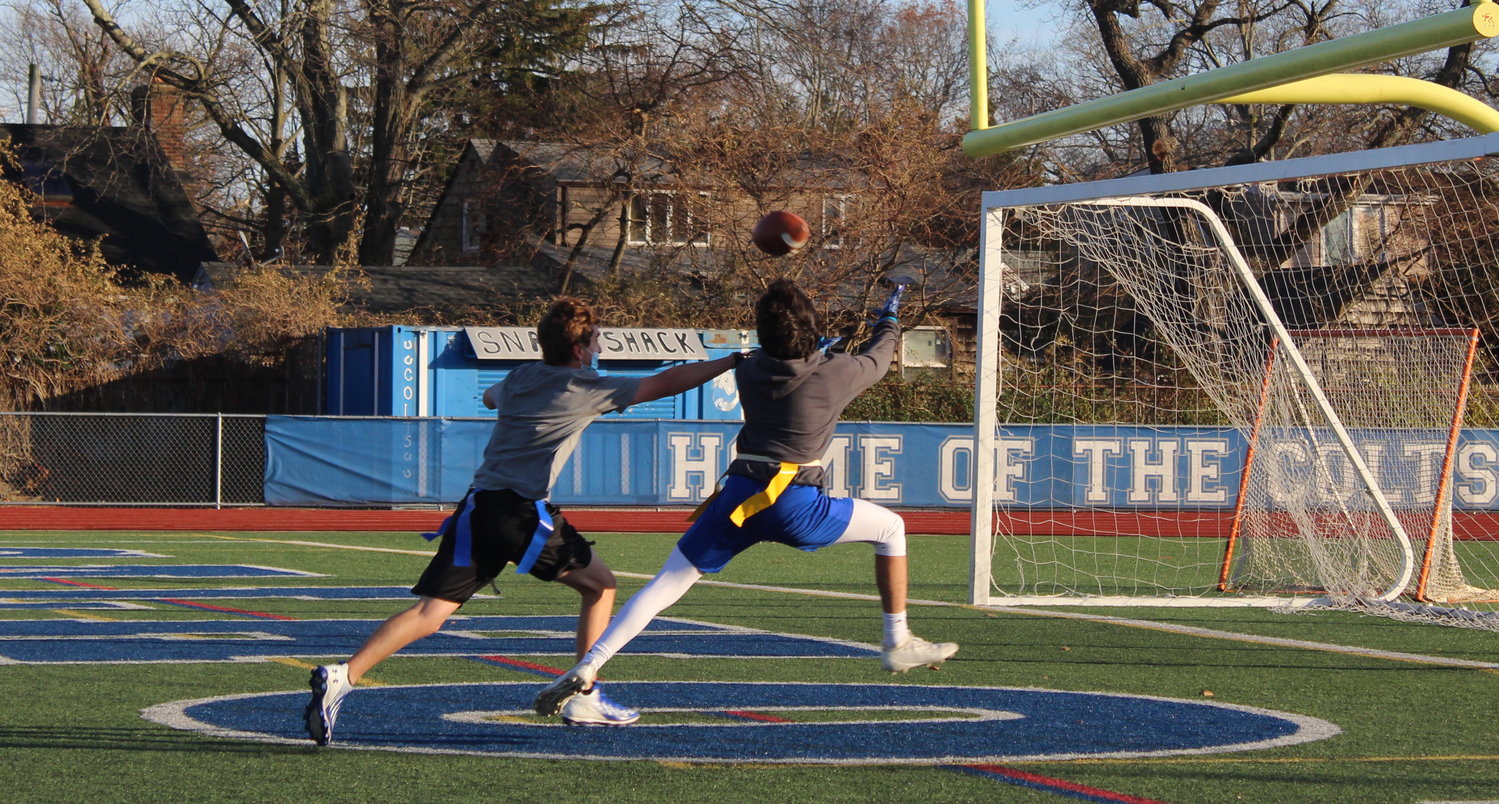 “Our athletes will meet with their coaches and outdoor facilities will be made available for supervised training and workouts,” said District Athletic Director Eric Caballero. “This will provide our student-athletes an adequate amount of time to prepare and condition so that they are ready to safely engage in competition at the appropriate time.”

Spring sports include baseball, softball, lacrosse, track and field, golf, boys’ tennis and girls’ badminton. All activities will take place outdoors and will be conducted in accordance with guidelines and recommendations from the New York State Department of Health, the New York State Education Department and the Centers for Disease Control and Prevention.

“Our primary focus will be to maintain the health and safety of our coaches and student-athletes, while also continuing to actively plan for three interscholastic sports seasons, as outlined by Section VIII, in January of 2021,” Caballero added.

Flags were flying on the field of Sanford H. Calhoun High School before Thanksgiving break on Nov. 24, as student-athletes took part in a flag football tournament to benefit the Bellmore-Merrick Community Cupboard.

Since fall sports in Nassau are postponed until March 1 due to the coronavirus pandemic, assistant football coach Joe Migliano said he and other coaches wanted to give their athletes an opportunity to play ball while giving back to a good cause.

“We’ve been practicing with the kids three days a week for the past two months, just running and conditioning, keeping everything socially distant (see box),” Migliano said, “and we just wanted to give them something to have some fun with. Anything to give them enjoyment, that’s why we’re here — that’s what this is about.”

In the spirit of giving, students were required to donate two non-perishable food items as their entrance fee in to the tournament. By the end of the day, the players collected nearly 60 pounds of food for the cupboard, which will help feed local families this season.

Although the usual markings of a high school sporting event were absent from the afternoon, Colt pride was still prevalent on and off the field. Six teams participated in the tournament, including an all-girl squad comprising Migliano’s varsity track members. From the sidelines, students whooped and hollered as their classmates completed skillful plays to advance to the end zone.

“I’m really pleased to see the kids having such fun and raising awareness for the cupboard and making so many great donations,” Principal Nicole Hollings said. “You can even see their smiles under their masks.”

The tournament was also important to Calhoun’s football squad, and to its seniors whose last season has been stunted by the pandemic.

“It’s been very hard for me and all my teammates to not have sports every day — it's mentally draining for all of us,” said kicker Nicole Devlin, “but just this week you could see in the hallways the spirits have been so much better because of this one little tournament.”

Quarterback Asher Carman said, “I think that a lot of the guys wanted to get together and play, and what’s better than to play and do something good for the community?”

Both Devlin and Carman said the tournament helped bring the team closer together, a much-needed sentiment in the year without a season. “When it’s time to work, [we’re] workhorses, but . . . it’s really nice to see everybody out here having fun,” Carman said. “It brings us more together as a family.”

Devlin noted the “amazing” efforts of Calhoun’s athletics program to keep her and her teammates motivated during the pandemic. “The coaches have tried to do everything they can to make sure we’re all mentally sane in this time without sports,” she said. “To be able to come out here and just have a fun, it’s probably my favorite day of the year so far.”

“The pandemic has really hurt a lot of these kids,” Migliano added. “This is what they love to do, they just want to play.”

The Bellmore-Merrick Community Cupboard is located at Brookside (1260 Meadowbrook Road, Merrick). For more information or to inquire about donating, call (516) 992-1073.