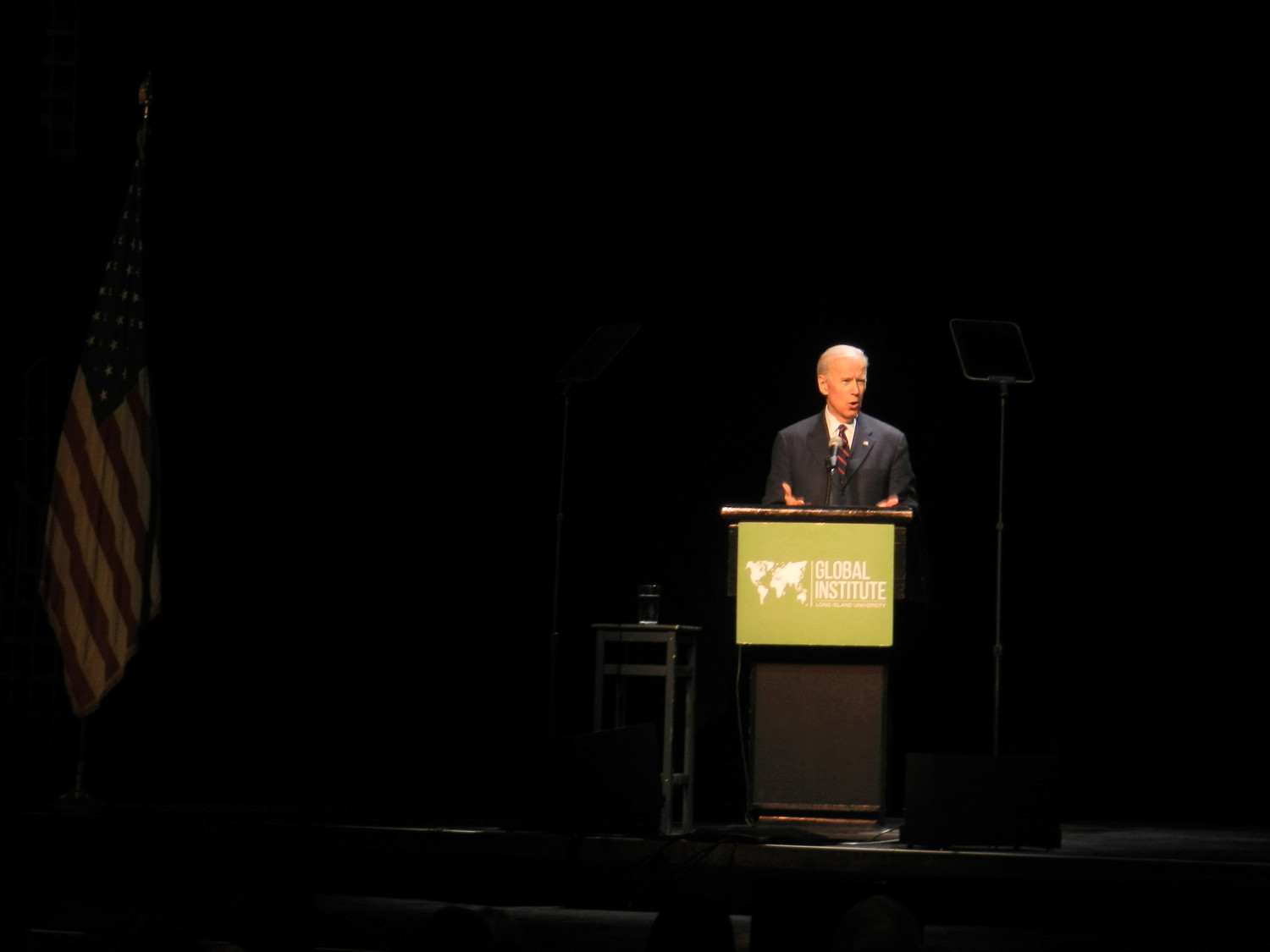 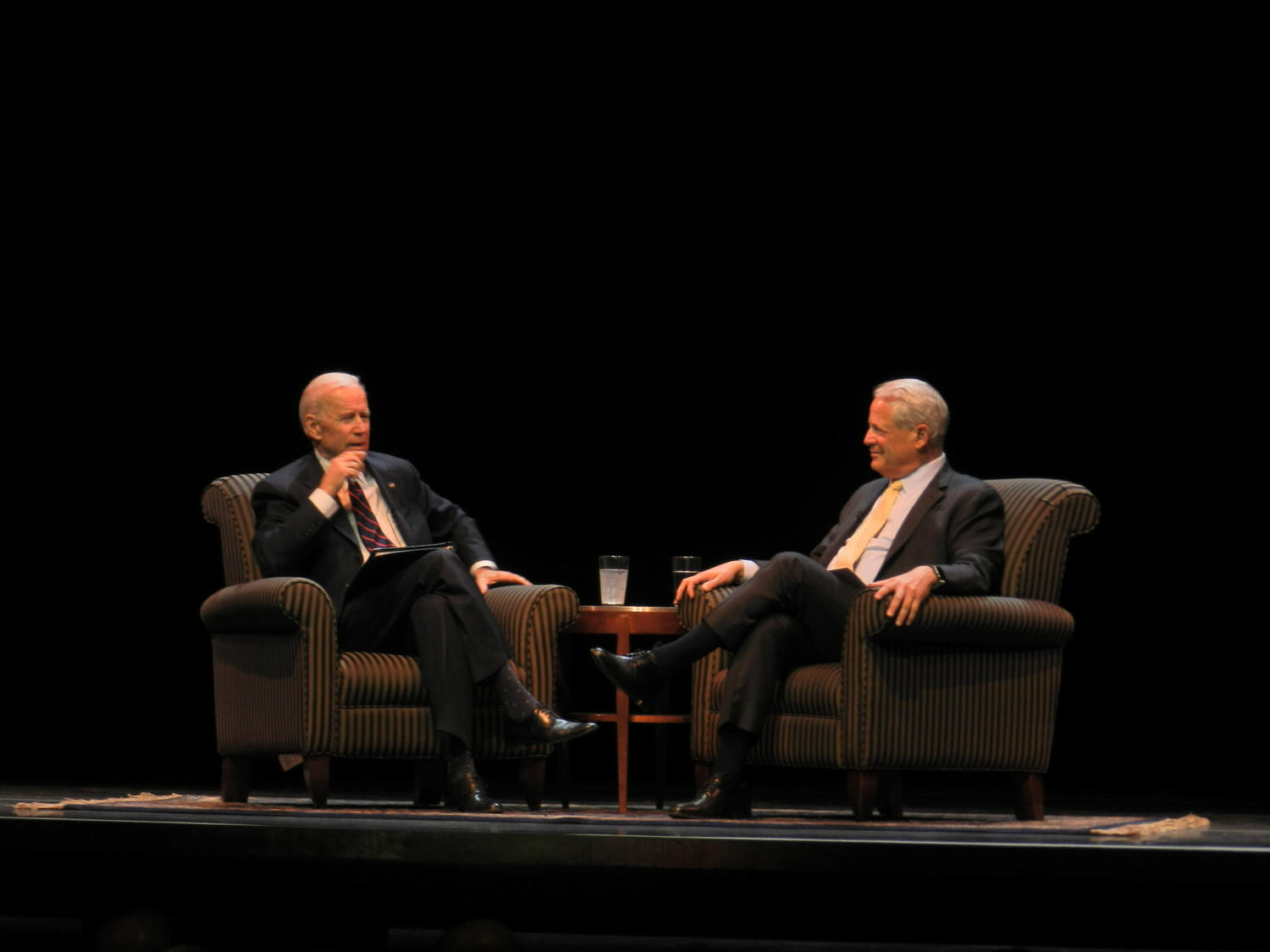 The Global Institute offers the community the opportunity to hear political and military officials speak about foreign affairs and reflect on the state of the world. The program is chaired by former U.S. Rep. Steve Israel, who served on the Democratic Congressional Committee with Biden. “I’m only here because Steve told me to be,” he joked.

In his opening remarks, Biden, a former Newcastle County (Del.) councilman, acknowledged the political efforts of local leaders, specifically Nassau County Executive Laura Curran. “No one has more of an impact on the day-to-day lives of American citizens than local lawmakers,” he said.

The former vice president was a perfect guest for the institute, because he spent eight years in the Obama administration visiting foreign dignitaries and bridging gaps on world issues. Trips to Russia, he recalled, were particularly taxing. He noted that the attitude of the Kremlin, which he described as a “kleptocracy,” threatens the “liberal world order.”

The latter term, which is cited in the Penn Biden Center’s mission statement, reflects a system of rules established after World War II that facilitated the free movement of people, goods and capital, protected nations’ sovereignty and promoted human rights and fundamental freedoms.

“Their kleptocracy casts doubt and destabilizes democracies throughout the world,” Biden said of the Russians. “And their actions to advance their own power and privilege, when taken as a whole, strike at the heart of the liberal world order.”

He said he feared that the apathy of the Trump administration to confront Russia’s “naked aggression” also poses a threat to America’s relationship with its European partners, and called the inaction a missed opportunity to lead.

In order to reclaim the liberal world order, Biden said, it is imperative for the U.S. to stand united with its European allies and continue to influence other countries through “the power of our example.”

After his speech, the former vice president joined Israel center stage for a Q&A. Israel began by sharing an account of “the real Joe Biden,” the one who would personally called Israel’s mother to show his support after her husband was diagnosed with cancer. Biden went on to talk at length about his own connection to cancer — his son, Beau, died of brain cancer — something he said he is “mildly passionate” about.

On March 24, the March for Our Lives movement inspired rallies nationwide in an effort to lobby for common-sense gun legislation. Biden said that although he is a supporter of the Second Amendment, it’s not absolute.

“These [Parkland, Fla.] kids are forcing legislators to look them in the eye and forcing them to focus on what to do to make them safe,” he said. “They’re going to change the way things are in terms of gun safety.”

Earlier, introducing Biden, LIU President Kimberly Cline had referred to him as “one of the most accomplished members of the Senate.” Israel echoed the sentiment by commending Biden’s efforts to find common ground between Republicans and Democrats.

Biden said that this understanding is lost on America’s current government. “We don’t know one another,” he said. “You cannot run this country institutionally; you’ve got to come to a consensus.”

Despite political turmoil both at home and abroad, Biden said he remains optimistic. “I believe we are positioned to meet the challenges of our time,” he said. “We just have to lift our heads up and remember who the hell we are.”