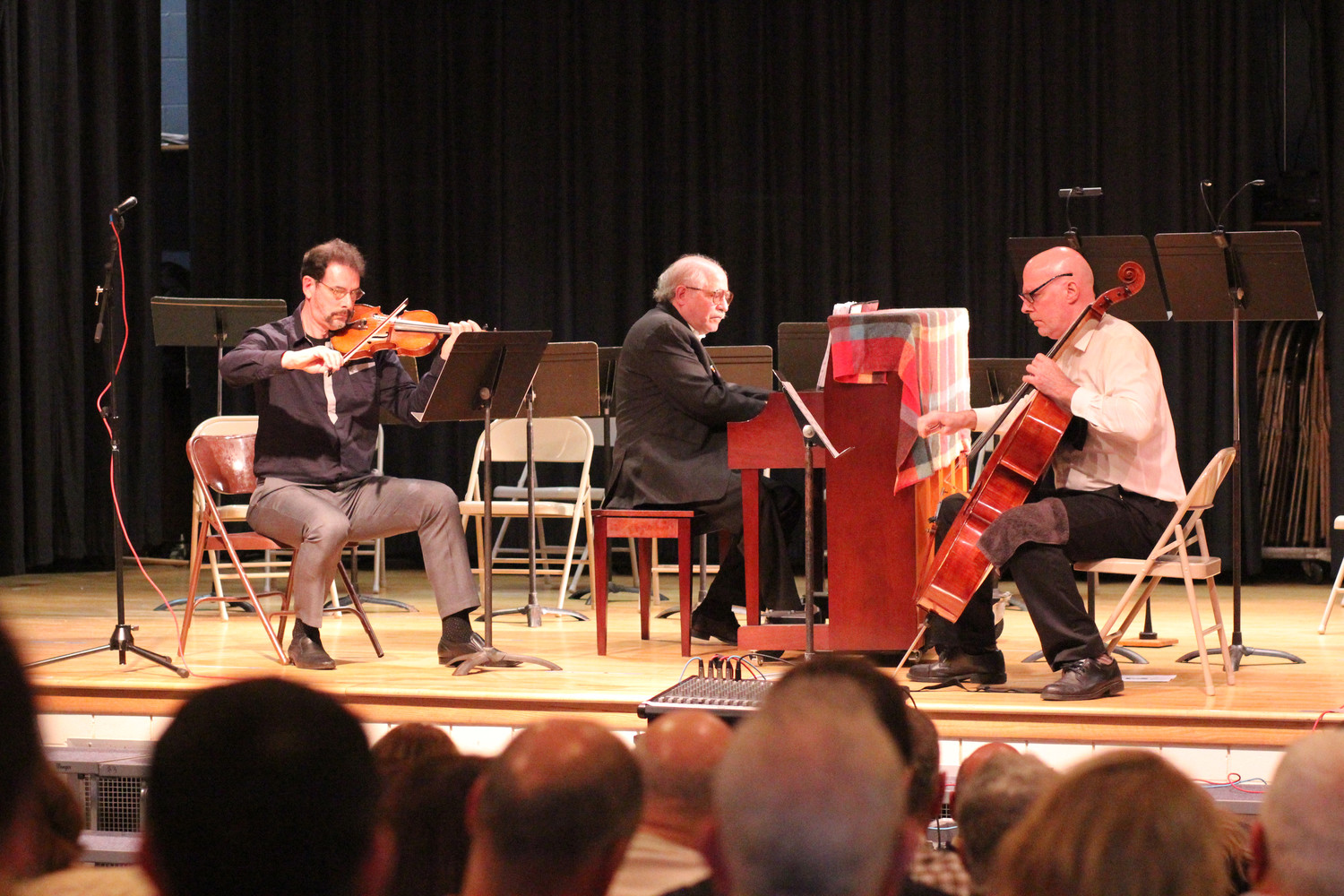 The Dakule Trio, from left, violinist Daniel Hyman, pianist Leonard Lehrman and cellist Kurt Behnke, performed “Trio (‘Invictus’),” a piece composed by Herbert Rothgarber in 2001, during a tribute to Rothgarber at Oceanside School No. 8 on Nov. 5.
Theresa Press/Herald 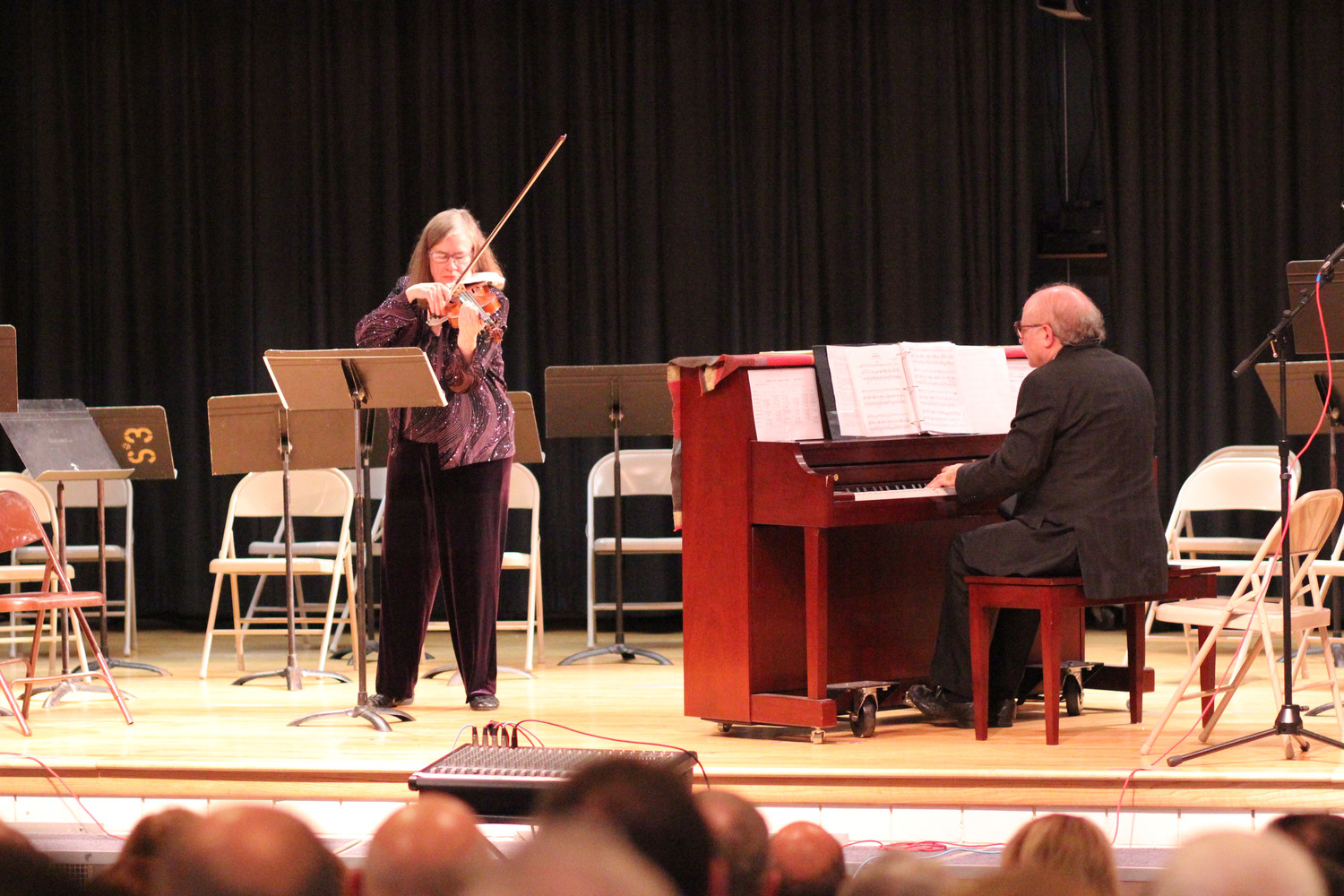 Anne Yarrow commissioned and recorded all 12 of Rothgarber’s pieces for violin and piano and performed a few of them at the concert honoring the composer. Leonard Lehrman accompanied Yarrow on piano.
Theresa Press/Herald 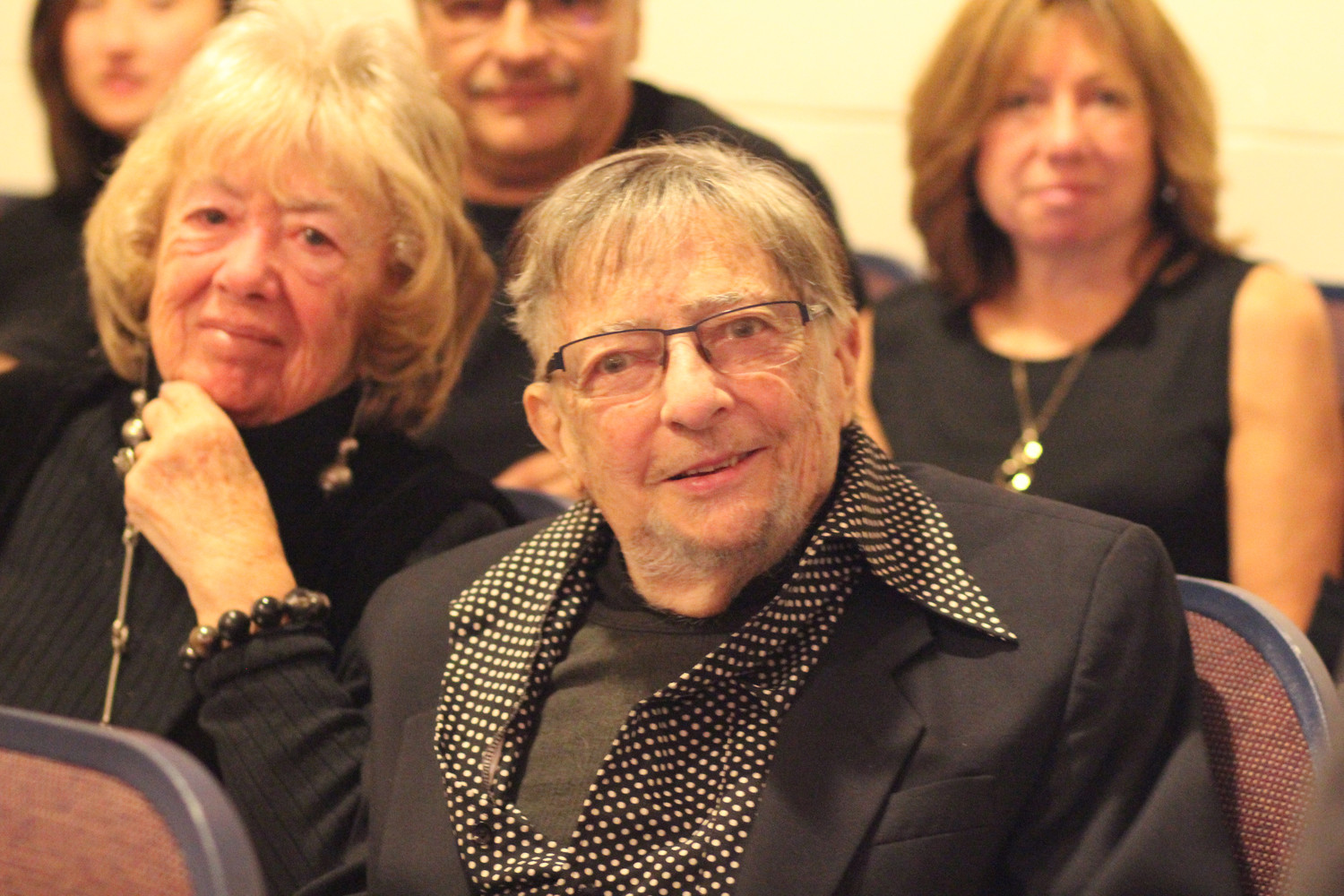 Anne Yarrow commissioned and recorded all 12 of Rothgarber’s piecesfor violin and piano and performed a few of them at the concert honoring the composer. Leonard Lehrman accompanied Yarrow on piano.
Theresa Press/Herald 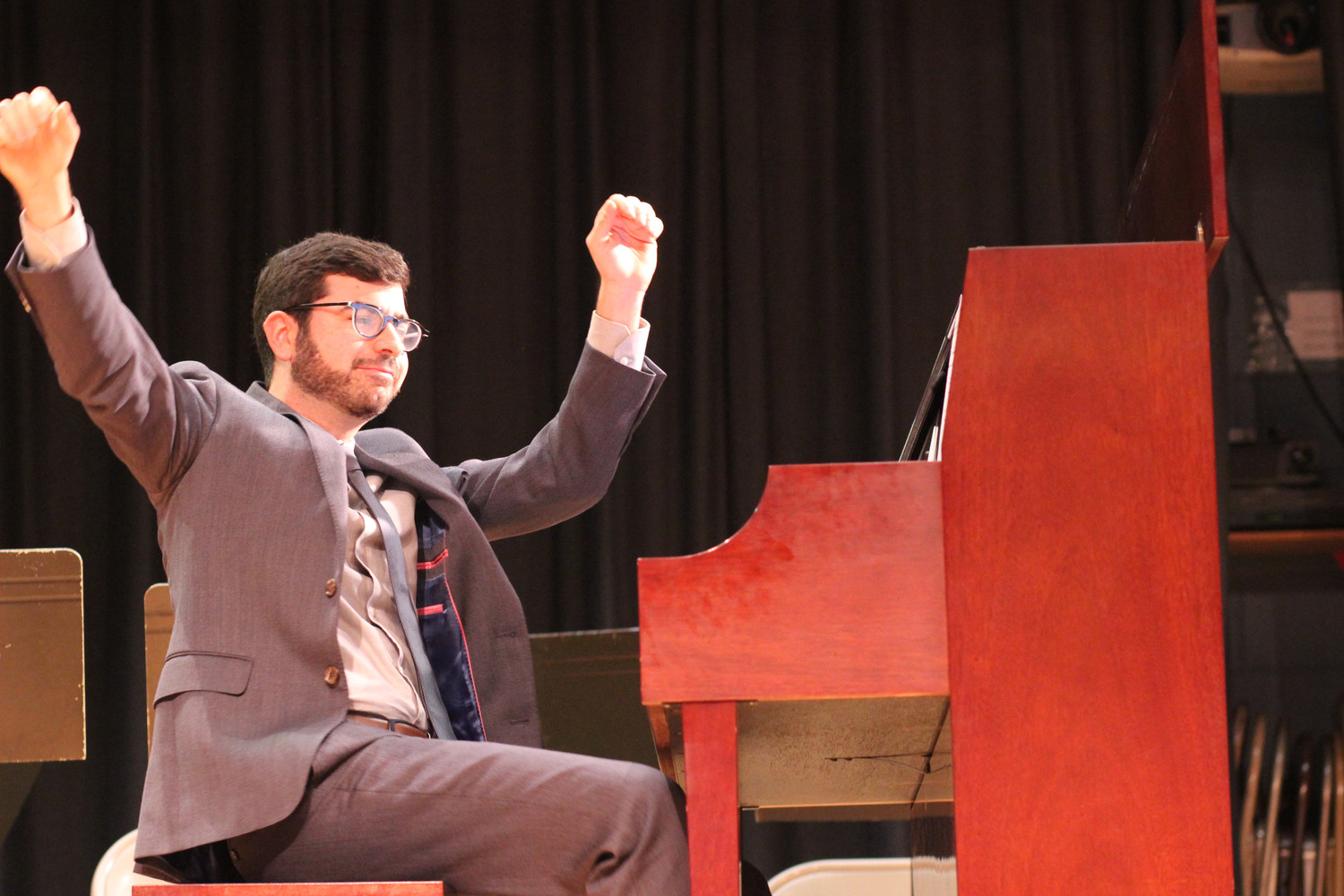 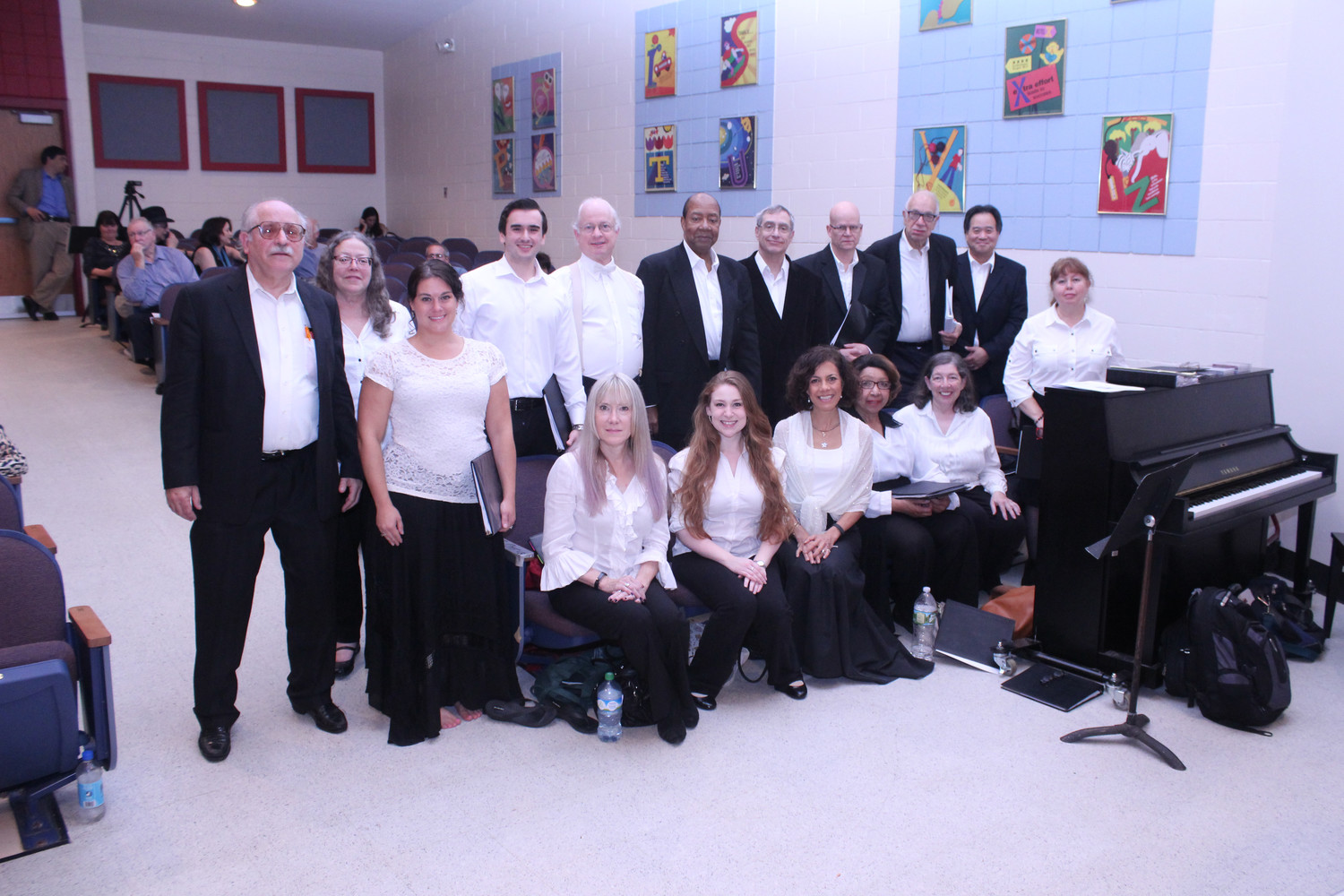 The Metropolitan Philharmonic Chorus, founded by Lehrman, far left, performed several of Rothgarber’s works, including “Make A Wish,” his most recent composition.
Theresa Press/Herald
Previous Next
By Nadya Nataly

Thunderous applause echoed through Oceanside School No. 8’s auditorium on Nov. 5 during a community tribute for musician and composer Herbert Rothgarber, of Freeport. The Long Island Composers Alliance; the Maldeb Foundation; and the Professor Edgar Lehrman Memorial Foundation for Ethics, Religion, Science and the Arts Inc. organized the event in honor of Rothgarber, who has been diagnosed with bone cancer.
Fellow LICA member Leonard Lehrman, of Valley Stream, said, “He has been told by his doctor he probably has less than a year to live.” The tribute, Lehrman said, was intended to honor the composer “while he is still with us to appreciate it. We wanted to honor him in a way that he could appreciate, and could bring the joy of his music to so many of his friends, family, colleagues and former students.”
Rothgarber was among LICA’s founders and has helped the group to thrive since 1973, Lehrman said, noting, “As a teacher, he has been crucial in keeping the organization on an even keel. He is respected and a beloved figure in the community, all over Long Island, but particularly [in] Freeport and Oceanside.”
Rothgarber was born in Brownsville, Brooklyn, where he studied music under several violin and piano teachers by the time he was 10. From that early start, he carved out a musical career that included a long tenure as a public school teacher and performances of his works on a number of the world’s best-known stages.
Among his compositions are “The Magic Yo-Yo,” an opera performed at the New York World’s Fair in 1964 and later televised by NBC. Others include piano solos, like “Lullaby for a Young Chieftain” and “Drums,” and other musical compositions for violin, viola, cello and string quartet.


His music has been performed at festivals in Beijing, China, and Cambridge University in England. His work has also been performed in Italy and Bulgaria.
Rothgarber taught music at Oceanside School No. 8 from 1957 to 1986, while also composing classical music, including operas. He had dreams of becoming a concert soloist, but did not follow that route. “There are times when I regret the fact that I didn’t continue the path of becoming a concert soloist,” he said. “But when I think about it, the most beautiful word in the language is ‘teacher.’ There was a time when I thought it was secondary. To be a teacher meant that you didn’t succeed as a soloist, but I don’t feel that in any way. I feel I was born to be a teacher. The highlight of my career is having come to that realization and having the pleasure of working with young people.”
During the No. 8 School performance, pianist Michael Brown, who studied with Rothgarber from age 5 to 14, performed a piece that Rothgarber wrote in 1980, “Blare.” With a smile, Rothgarber listened closely to Brown’s fingers danced through the piece. Brown is a Steinway artist and, recipient of awards both domestic and international.
Other performers included the Dakule Trio with Daniel Hyman on violin, Kurt Behnke on cello and Leonard Lehrman on piano; and Natalya Simone, Anne Yarrow, Helene Williams, Gregory Mercer, Terry Keevil, Ellen Johansen and the Metropolitan Philharmonic Chorus.
Videos of the LICA’s tribute for Rothgarber can be viewed at https://goo.gl/zs2Bym.
Report an inappropriate comment