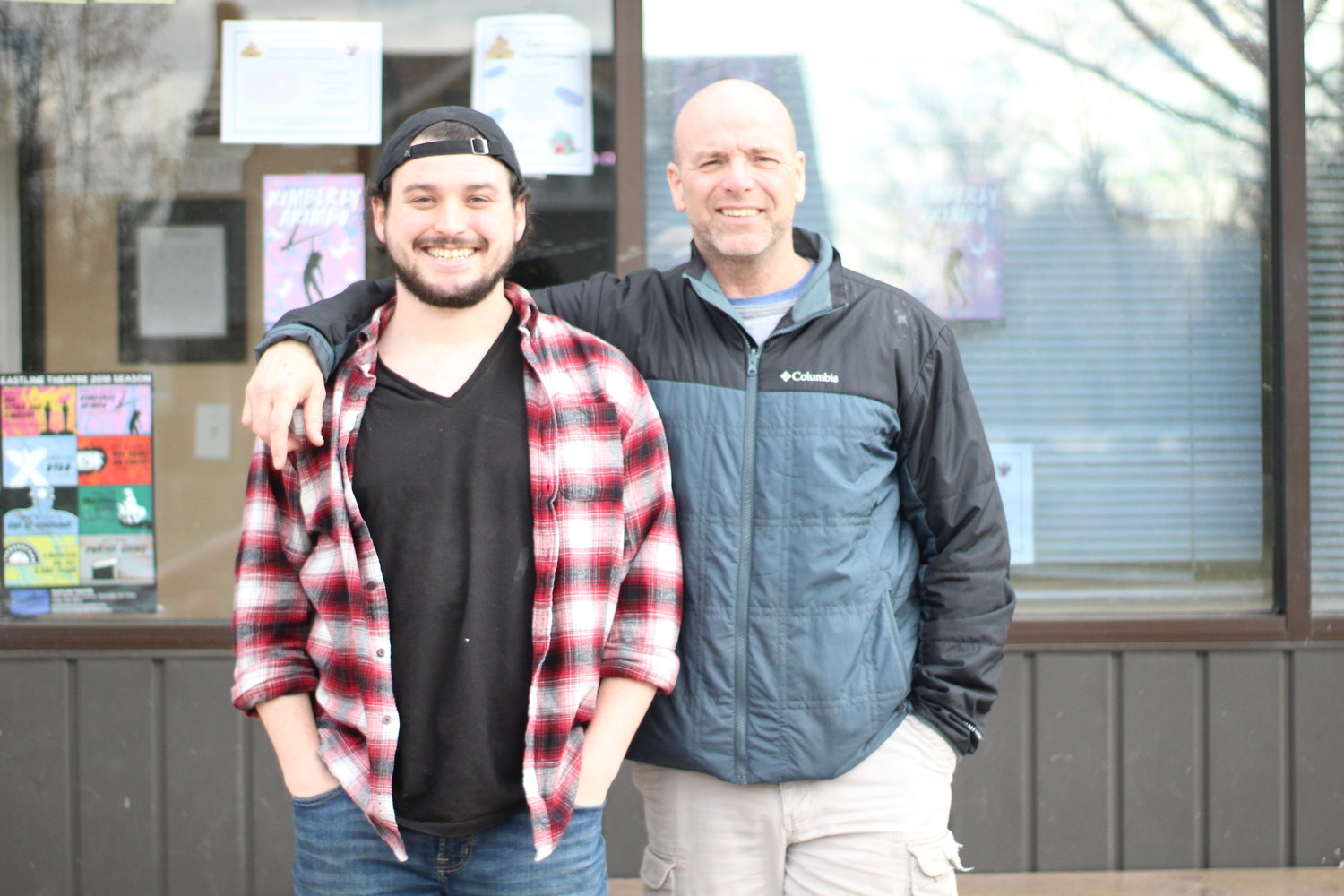 Danny and Bob Higgins took over EastLine Productions last September, and have raised almost $10,000 as a non-profit to revitalize and redefine the Wantagh community theater.
James Mattone/Herald 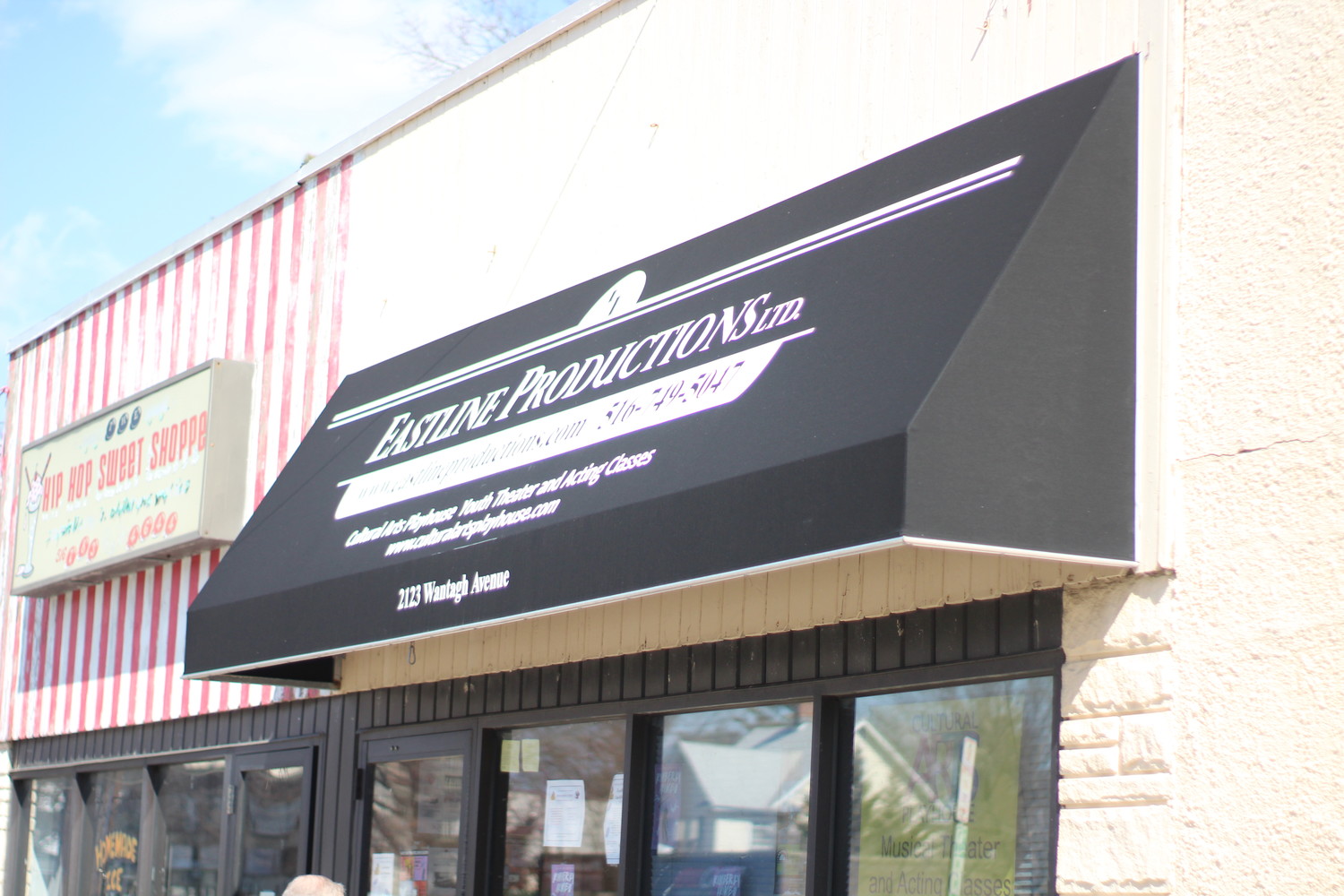 The EastLine Theatre holds up to 48 people, and has a stage that is about the size of a living room.
James Mattone/Herald 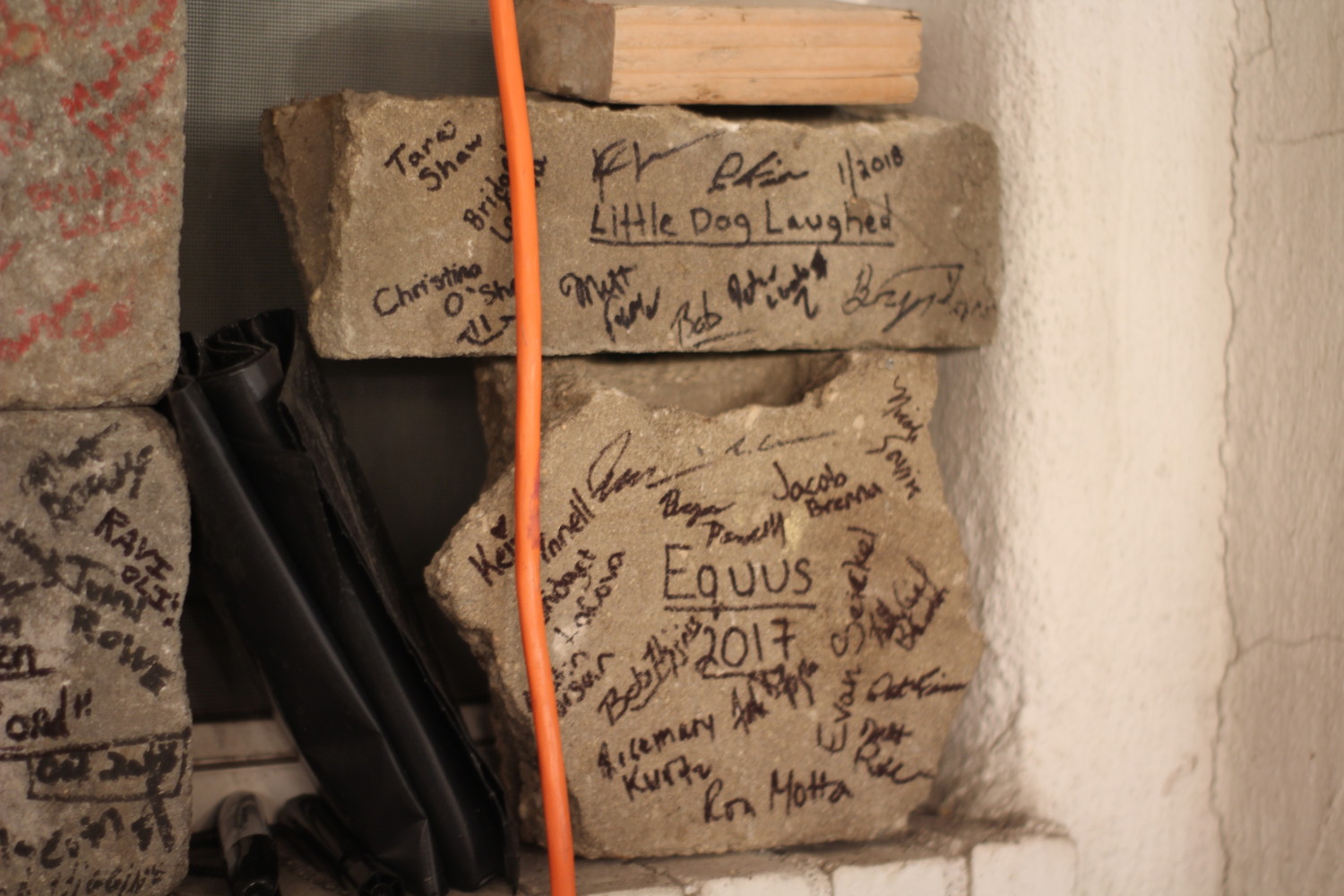 Bob Higgins explained that these stones are an EastLine tradition after a production ends and were inspired by a high school drama teacher’s speech recited by his son Danny.
James Mattone/Herald 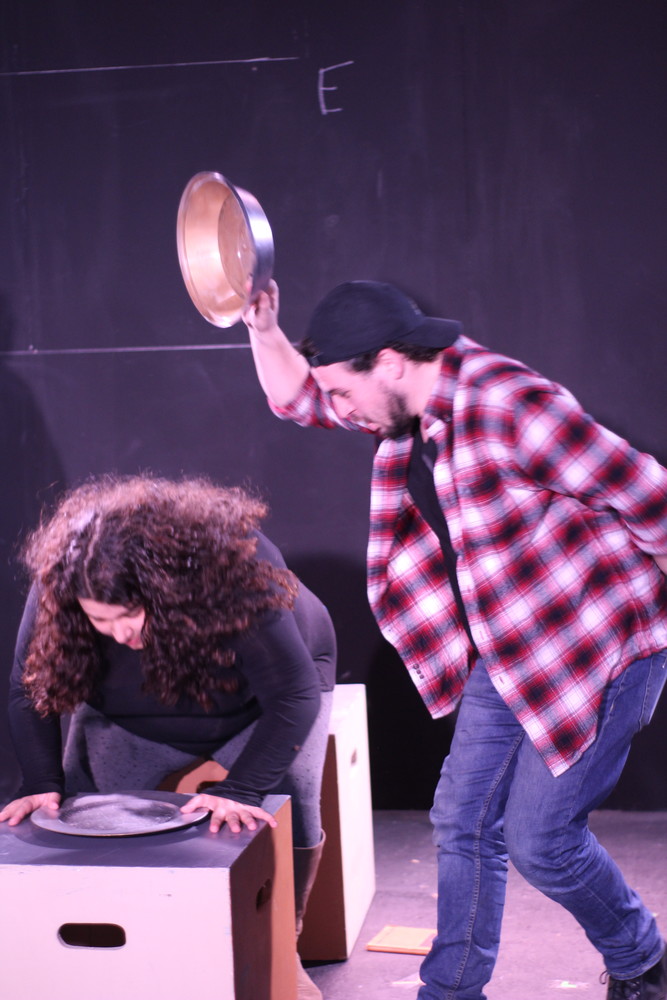 Nestled between a candy store and a carpentry shop, EastLine Productions sits modestly on Wantagh Avenue in Wantagh.

Broadway theaters have flashing neon signs that light up Manhattan. EastLine Theatre has a simple black banner. On the Upper West Side, the Vivian Beaumont Theater can seat 1,200 patrons. EastLine holds 48.

Despite its unassuming appearance and size, EastLine Productions, owned and operated by Freeport native Bob Higgins and his 25-year-old son, Danny, is an audacious voice in community theater. After several bold productions, the non-profit theater will stage the first regional version of “Oslo,” a drama based on the 1993 Oslo Peace Accords that won a 2017 Tony Award for Best Play, on April 7. The play will run through April 22.

EastLine Productions, short for “East of the City Line,” lies in what Bob describes as an artistic desert. “I had a lot of friends in the artistic world,” he explained, “and they did theater in two places: the city and in the Hamptons.”
The Higginses took over EastLine Productions last September. Bob said it had an outstanding debt of more than $10,000 and had previously played it safe in terms of its show schedule.

Two months later, the Higginses took their first gamble: a limited-run production of “Equus,” a Tony Award-winning show about a boy who is sexually attracted to horses. Daniel Radcliffe, of “Harry Potter” fame, starred in the play’s 2007 Broadway revival and drew media attention by performing a full-frontal nudity scene.

At first Bob hesitated to stage such a scene, saying it would be the equivalent of watching someone run around naked in his living room. After seeing the scene in context, however, he approved it, and gave his son the OK to direct the full show. The community, he said, reacted well to it.
He remembered some local folks exclaim after the show, “Holy Christ, you pulled this off. You didn’t just pull this off, you blew it away.” Others walked out disgusted, but eventually returned to see other shows.

The family began fundraising efforts as soon as they took control of the theater. While keeping ticket prices affordable — current prices for “Oslo” are $20 — they accepted additional donations after shows and ran fundraisers, such as “drag bingo,” a bingo night hosted by drag queens.

Bob’s family and friends in Freeport were among the theater’s donors, but most donations come from local people who are interested in theater.

Joni Christie, executive vice president of Wantagh’s Temple B’nai Torah, is one of those Long Island theater fans. When she sent over 200 letters asking local businesses to send raffle prizes for the temple’s annual gala fundraiser, Susan Berkowitz, EastLine’s vice president, responded with free tickets to a future show.
At the time, Christie also wanted to see “Oslo” on Broadway, and her temple was interested in the show’s subject matter. After meeting with Berkowitz, Christie said that Temple B’Nai Torah received a full show to themselves during “Oslo’s” run at EastLine.

“Once I advertised it,” Christie said, “everybody in the temple got excited. And now they are all familiar with the theater – because I told them about it and they look forward to, after this, go to other performances.”

Due to its low price and convenient location, Christie said the community theater is important both to the arts at large as well as those who have difficulty traveling to Broadway.

“It’s very easily accessible for someone with a walker or someone who can’t get up steps,” Christie said, “and it’s a great thing.”

A rock for aspiring actors

While driving with her mother and brother down Wantagh Avenue in the spring of 2016, Bridgette LaCova, from Wantagh, saw EastLine Productions had a show that night. In need of summer work as a stage management major in college, LaCova doubled back to the theater and met Danny, who welcomed her as a summer intern a few weeks after she sent her resume in.

Two years later, LaCova serves as EastLine’s stage manager and grew to regard her co-workers as an extension of her own family.

“They are a big part of my life,” LaCova said, “When I met them, I was at a point in my life where I wasn’t too sure if I was doing the right thing in wanting to be a stage manager. They really helped to show me, like, yeah, this is what I want to do and what I love.”

In EastLine’s dressing room, which was built thanks to community donations, there are large stones, each with the name of an EastLine Production play and signatures of the show’s cast and crew.

The idea came after Danny told the story of his high school drama teacher, who asked his students what they wanted to be remembered for and to set it in stone.
“The very first time he told that speech,” Bob recalled, “I happened to have a rock at the base of my feet. So I kicked it, picked it up and handed it to him.”