From Valley Stream to the White House 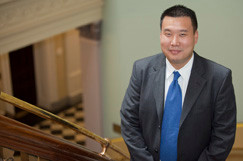 Shin Inouye got his footing in Valley Stream when he attended Wheeler Avenue School as a child, but the 33-year-old is making a difference on a more famous street now — Pennsylvania Avenue. As the director of special media in the White House Office of Communications, Inouye is involved in some of the biggest topics of today. Inouye answered some questions for the Valley Stream Herald on his journey to the job and what’s it like to work for President Obama.

He attended St. Mary’s International High School in Tokyo and college at Johns Hopkins University where he earned a bachelor’s degree in political science. For his first job out of college, he was a legislative and communications assistant at the American Civil Liberties Union’s legislative office in Washington, D.C.

Herald: How did you get your first job?
Inouye: I started an ACLU chapter in college, and served on the ACLU of Maryland board. One of the board members was the director of communications at the ACLU Washington Legislative office, and when I mentioned I was looking for a job, he suggested I apply for a new position in their office. I did, and ended up getting the position.

Herald: How did you get your current job?
Inouye: I held a similar position on the Obama-Biden presidential campaign in 2008.

Herald: What have you learned?
Inouye: Relationships are key — both internally and externally. I’ve always done my best to be responsive to all inquiries, and do my best to assist.

Herald: What do you enjoy most about your job?
Inouye: One of the best things is that I get to work for an administration that has done so much to move our country forward, and is committed to continuing that progress.