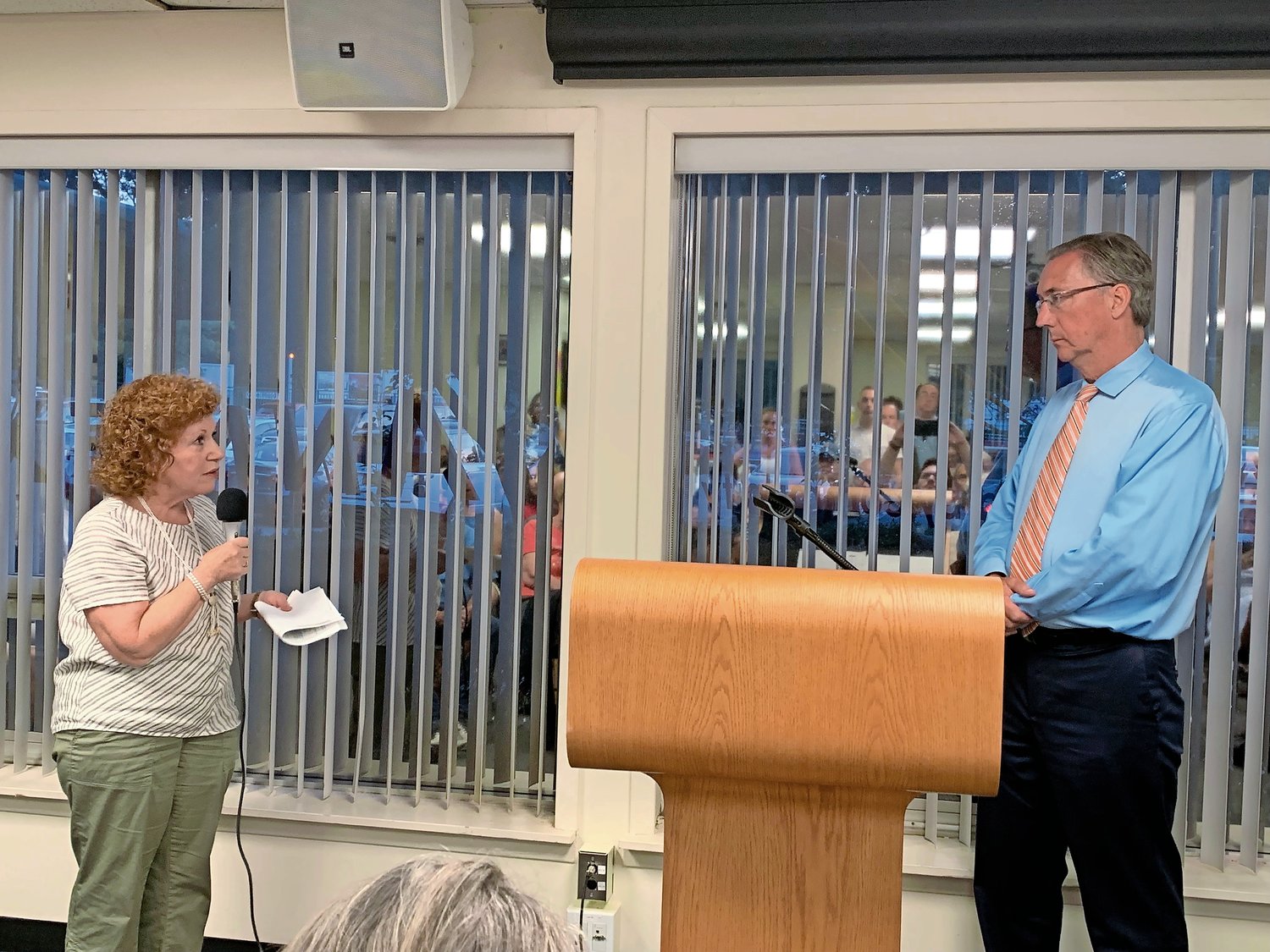 Carol DiPaolo, left, of the Coalition to Save Hempstead Harbor, suggested to Sen. Jim Gaughran that developers be encouraged to move toward clean energy.
Mike Conn/Herald Gazette 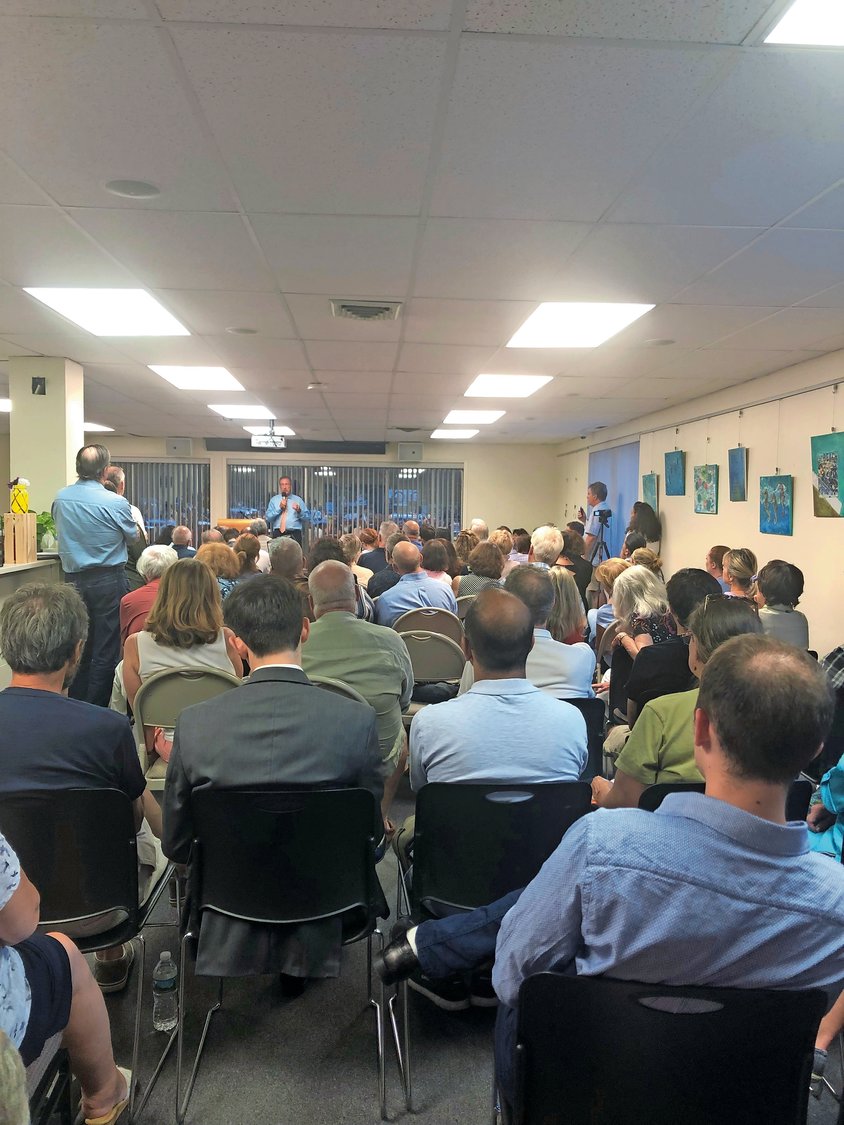 More than 50 people gathered at the Gold Coast Library for Gaughran’s town hall on the environment.
Mike Conn/Herald Gazette
Previous Next

I can tell you firsthand from going out on rescues the impact it has on our wildlife. We’re going to lose everything.”
Skip Dommin Volunteers for Wildlife
By Mike Conn

State Sen. Jim Gaughran, a Democrat from Northport, held a town hall meeting at the Gold Coast Library in Glen Head on July 30, at which residents asked questions and offered comments on the environmental issues facing the North Shore.

Gaughran said that the State Legislature had dealt with a number of environmental issues this year, including the banning of plastic bags from retail stores, which drew applause from the audience. He also noted the passage of the Climate Community Protection Act, which he described as a blueprint to get New York to move toward clean energy, and focused on Long Island’s water quality, saying that a majority of the contamination is attributable to human polluters.

From there, Gaughran passed the microphone to, and exchanged ideas with, more than two dozen residents, who offered their opinions on a variety of environmental issues.

Skip Dommin, of Glen Head, a wildlife rescuer for Locust Valley’s Volunteers for Wildlife, said he was worried about how continuing “unrestrained development” on Long Island might affect native wildlife. “I can tell you firsthand from going out on rescues the impact it has on our wildlife,” he said. “We’re going to lose everything.”

The organization rescues about 2,000 animals per year, Dommin said, a number that will only rise as human development increases. He asked Gaughran how developers could continue dominating Long Island’s natural landscape despite all of the environmental problems it faces.

Gaughran said he had also seen the evidence of this issue, including displaced deer in his neighborhood. While he said that real estate developments are zoning issues that must be addressed by local governments, he is looking into how the state can get involved in issues raised by developments such as Garvies Point, in Glen Cove.

While Garvies Point falls under the jurisdiction of the city, it affects surrounding communities, like Sea Cliff, whose residents don’t have a say in the matter. Gaughran said he would work to find a way to give communities adjacent to large developments a voice, although for now residents must take problems up with their local governments.

Carol DiPaolo, the program director for the Coalition to Save Hempstead Harbor, said she had spoken with many local officials about the impact developments such as Garvies Point have on the environment. A Sea Cliff resident, she said there are limited water sources on Long Island, and developments inevitably increase water pollution. Water and sewage companies, DePaolo said, can downplay the problem.

There may be something state government can do about these developments, she said. She suggested offering tax incentives to developers, and tying new developments to calculations of how much pollution each unit would contribute or how much water would need to be treated for contaminants.

“I would suggest that this might be some way of calming what is no longer any attempt at smart growth,” DiPaolo said. “It’s growth gone crazy, and we don’t have the resources to deal with that.”

Gaughran said he had looked into tax incentive programs for developers, and would continue to do so. Development of Long Island’s open spaces needs to be controlled, he said, and he and his colleagues in state government are doing what they can to do so.

Agatha Nadel, of Glen Head, a member of North Shore Concerned Citizens, a group of residents working to replace New York American Water with another water provider, expressed concern about how treatment of 1,4-dioxane in the water supply would be paid for. The chemical is widespread in Long Island’s groundwater and drinking water, and it may be up to the customers of private water providers, like NYAW, to pay for its treatment, she said. Nadel pressed Gaughran on how Albany can help taxpayers deal with this potential increase in water rates.

Gaughran said he believed the solution for consumers who receive private water would be consolidation into a public water entity. The state government, he said, could not directly provide NYAW with funding for testing, because it is illegal for the government to give money to private entities.

“Ultimately,” he said, “the only way we’re going to be able to resolve this is if we win this battle to have public water.” He also thanked the people of Sea Cliff for helping with feasibility studies to determine the best way the state can make water entirely public.

The youngest audience member to speak was Subhana Zafar, a rising senior at Walt Whitman High School in South Huntington. She said she has long had a passion for the environment, and that while young people are not in control of the laws being made now, it will be up to future generations to deal with the environment.

“At the end of the day, it’s up to us, the future generation, to take over and make the decisions and deal with the ramifications about the decisions that are being made today,” Zafar said, asking Gaughran whether he was working with young people on environmental issues.

After the town hall, Gaughran said that it gave him new perspective on issues he might raise in the Legislature in the near future — in particular, allowing communities adjacent to new developments to have a voice, which he said is of particular importance to the North Shore.