A closer look at the people with pistol licenses 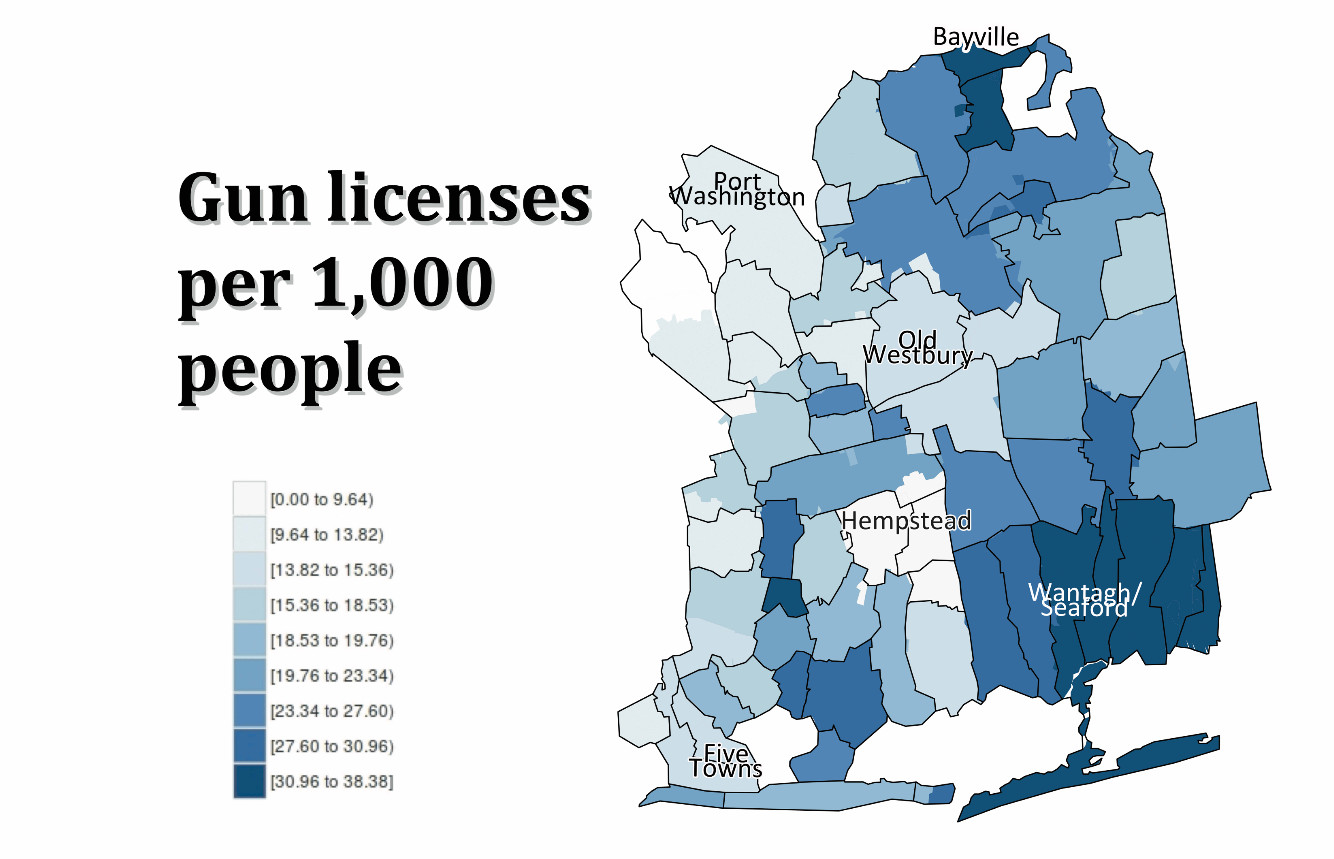 If someone is mentally ill, they shouldn’t have a gun. Period.”
Bob Tice, pistol license holder, competitive shooter
How the NCPD vets pistol license applicants

Applicants submit paperwork to the Nassau County Police Department. The application requires, among other information, a complete driving record history, four character references who are not family members or law enforcement officers, detailed responses to a criminal history and mental health survey, and several identifying documents.

Officers in the NCPD’s Pistol License Section review the application, checking national and state crime databases, state mental health databases, medical records, Google and social media for any “red flags,” including DWIs, unpaid tickets and hospitalization for depression or alcohol poisoning. Officials also consider whether an applicant failed to disclose anything, which is itself a red flag.

When applicants arrive for their fingerprinting appointments, they are questioned by police officers about any concerns identified during the preliminary investigation. More red flags are added to the applicant’s file if there are inconsistencies between the information he or she gave verbally and what was on the application.

Depending on how the applicant answered the survey questions, officers will call the character references and confirm the details on the application. Character references — who must be Nassau County residents — are also used to track down people whose licenses have expired and the NCPD has been unable to contact.

Based on all of the information gleaned over the course of the investigation, a Pistol License Section officer then either approves or denies the application for a pistol license.

According to the state, obtaining a firearms license takes a minimum of four months.

By Zach Gottehrer-Cohen
Part four in a series.
Click here for parts 1, 2 and 3.

Given the recent prevalence of mass shootings, it has become increasingly difficult to avoid the topic of gun violence in discussions about firearms, and particularly firearm regulation. But for the Herald’s in-depth series on guns, we wanted to look deeper at the local landscape of responsible gun ownership in Nassau County.

Beyond state regulations, the firearms community has its own ways of self-regulating, according to longtime hunter and competitive target shooter Bob Tice, of Island Park.

“I’d say between 90 to 95 percent of [gun owners] are good, honest, hardworking citizens that enjoy shooting and take care of their equipment.” The exceptions to that rule, which he described with an assortment of expletives, “eventually get weeded out” from the larger community of gun owners.

Tice acknowledged that gun ownership isn’t for everyone, but resented the ways that anti-gun advocates characterize what he described as his constitutional right to defend himself. “Democrats say that it’s an antiquated amendment, that it’s not really a constitutional right,” Tice said, adding with exasperation, “But it’s in the Constitution!”

Speaking of a set of strict gun laws passed in New York in 2013 soon after the Sandy Hook Elementary School mass shooting in Connecticut in December 2012, Tice said the gun policies of Gov. Andrew Cuomo were “probably the worst thing to happen to New York state. . . . I think he jumped to conclusions, you know. He’s using tragedy to push his gun agenda.”

Tice’s pistol license only allows him to carry a gun on him on his way to a shooting range or to a hunting area, and he goes shooting every chance he gets. He’s a competitive shooter, and owns about seven pistols so he can take part in competitions that require a range of calibers. And, he said, when he’s not competing against a rival gun club, he’s competing against himself, trying to become a better shot.

“I grew up in a different time,” the 67-year old recalled. “I used to belong to the shooting club at Oceanside High School, where we actually shot rifles downstairs in the basement. So I grew up in that environment.” The school no longer has a shooting club.

Pistol licenses by the numbers

Across Nassau County, there are roughly 27,000 pistol license-holders like Tice, according to a document provided by Nassau County police that lists the number of licenses issued by zip code.

Countywide, there are about 20 pistol license holders per 1,000 people. That amounts to roughly 2 percent of the population. In Hempstead, the density is six per thousand, while in Seaford it’s 37 per thousand.

By comparing these numbers against the most recent census data, trends emerge. For example, the areas that have the highest concentration of pistol licenses also have the lowest concentrations of racial minorities.

Areas with high poverty rates are also less likely to have high pistol license densities, which might be explained by the high cost of gun ownership. In addition to the firearm itself, which on the low end costs around $200 and can run more than $4,000, applicants for a pistol license must pay a $200 fee. The cost of ammunition can be prohibitive as well, according to Tice, who said he spends about $1,000 a month on rounds.

The data also show that the pistol ownership rate decreases as the median household income increases beyond a threshold of about $110,00, suggesting that gun owners tend to live in upper-middle class areas, rather than at the extremely low or high ends of the wealth spectrum.

All of the county’s pistol license holders have gone through the Nassau County Police Department’s vetting procedures. Keeping guns away from people who shouldn’t have them is a task that Lt. Marc Timpano, the commanding officer of the department’s Pistol License Section, said he takes personally. After all, his signature is affixed to most of the licenses issued by the department. “Our number one concern is not only the safety of the person getting a handgun license issued to them, but public safety,” he said.

Essentially, the multi-step process is a way to identify “red flags” that would indicate that it would be unsafe to grant an applicant a pistol license. Officers in the Pistol License Section check national and state records for an applicant’s criminal past, medical and mental health histories. They also check publicly available sources like Google and social media sites to look for the smallest sign of potential trouble.

Before a license check is run, the NCPD asks applicants to explain these histories in their own words, so that officials can determine whether an application was filled out truthfully. They also ask for four character references that can vouch for an applicant’s ability to own a firearm.

The NCPD runs mental health checks through state databases to see whether an applicant has been institutionalized in the past, but Timpano said, “There’s no federal registry that would let us do a mental health check for another state.”

“I think that’s crazy,” Tice said. “Your mental condition doesn’t get any better by moving to a different state. If someone is mentally ill, they shouldn’t have a gun. Period.”
Report an inappropriate comment