The festive seasons gets underway 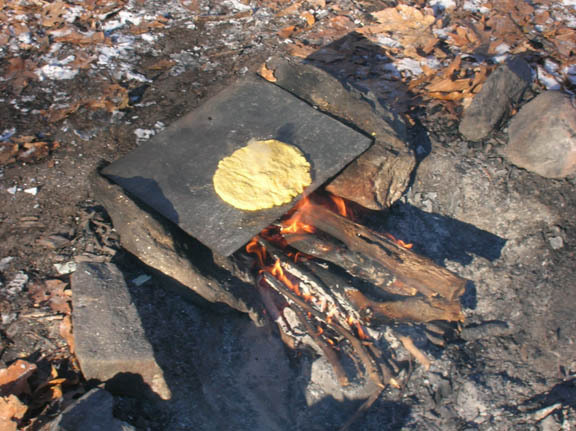 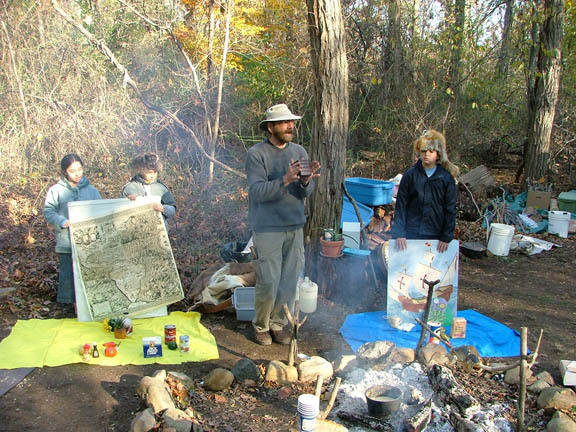 At the fire: Visitors to Garvies Point Museum and Preserve can experience a Native American feast. 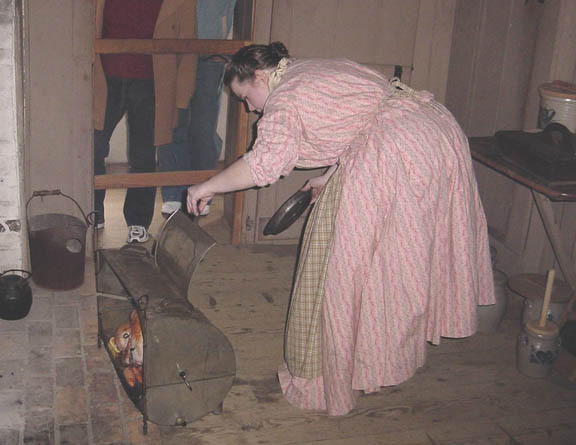 Thanksgiving 19th century-style: Checking the turkey at Old Bethpage Village Restoration, in a demonstration of some of the foods prepared for an old-fashioned holiday celebration.
Previous Next
by Karen Bloom

It’s that time of year. Time to focus on the turkey, the trimmings, visions of sugarplums, and so on. Before beginning those Thanksgiving preparations, take a moment to get into the spirit of the season and explore some of the many holiday-themed events going on this weekend.

An 1863 Thanksgiving
Imagine that it’s 1863 and you’re getting ready for a holiday meal for your family. What would it be like? Step back in time at Old Bethpage Village Restoration and find out when the village celebrates an “1863 Thanksgiving” this weekend and next.
It’s become an annual ritual for visitors at the recreated 19th-century village to immerse themselves in the sights and smells of holiday season. The village is bustling with activity as it readies for an old-fashioned Thanksgiving: wood-burning stoves, beehive stoves, beehive ovens, and hearths are fired up to prepare foods and baked goods made from 19th-century recipes. Culinary exhibits include the “spitting” and roasting of turkey in a tin reflector oven beside the Williams House hearth and preparation of pies at the Powell House. The village also displays the 19th-century methods of food preservation employed for late fall crops.


Historical period music adds to the festive atmosphere, while at the Noon Inn, children’s stories will be read several times each day.
“This program, which is itself a tradition at Old Bethpage Village, is a wonderful way for Long Islanders to connect with 19th-century American culture during one of our most significant national holidays,” said Jim McKenna, OBVR site director and curator.
Enjoy an old-fashioned Thanksgiving, Saturday and Sunday, Nov. 21-22 and Nov. 28-29, 10 a.m.-3:30 p.m. $10, $7 children and seniors. Old Bethpage Village Restoration is located on Round Swamp Rd., Old Bethpage. (516) 572-0200.

Feasting The Native American Way
It wasn’t called Thanksgiving back then, but Native Americans still made the most of nature’s bounty at harvest time. It’s a 27-year tradition for Garvies Point Museum and Preserve to mark the season’s festivities with its Thanksgiving-type feast. In this case, it’s a Native American version that celebrates the culture of Northeastern Native Americans, this weekend. The hands-on program gives visitors a first-hand look how Native Americans lived, through such activities as tool-making, fire-making, spear-throwing and the use of the atlatl.
Visitors can also sample native foods and learn pottery-making and the process of creating “dugout” canoes. In addition, there will be displays of artifacts from the museum collection and an authentic reproduction of a wigwam, always a favorite with kids and parents.
While there, take the opportunity to view the museum’s permanent exhibits, which showcase Long Island’s Native American culture and archaeology, as well as the geology of Long Island and New York State.
Explore the Native American experience, Saturday and Sunday, Nov. 21-22, 10 a.m.-4 p.m. $3, $2 ages 5-12. Garvies Point Museum and the adjoining 62-acre preserve are at 50 Barry Dr., in Glen Cove, by Hempstead Harbor. (516) 571-8010.

The First Thanksgiving
Long ago,when the Native Americans helped celebrate our first Thanksgiving, their traditions gave way to those of the early settlers. Another look at a Native American feast is offered at the Theodore Roosevelt Sanctuary & Audubon Center, at its pre-Thanksgiving celebration. Learn about the local Mattinecocks, stroll the woodland “supermart” for food, and help make (and taste) a Native American staple – journey cakes!
Don’t know what a journey cake is? Visit the Sanctuary & Audubon Center on Sunday, Nov. 22, 1-2 p.m., and find out. $3. The site is located 134 Cove Rd., Oyster Bay. (516) 922-3200.