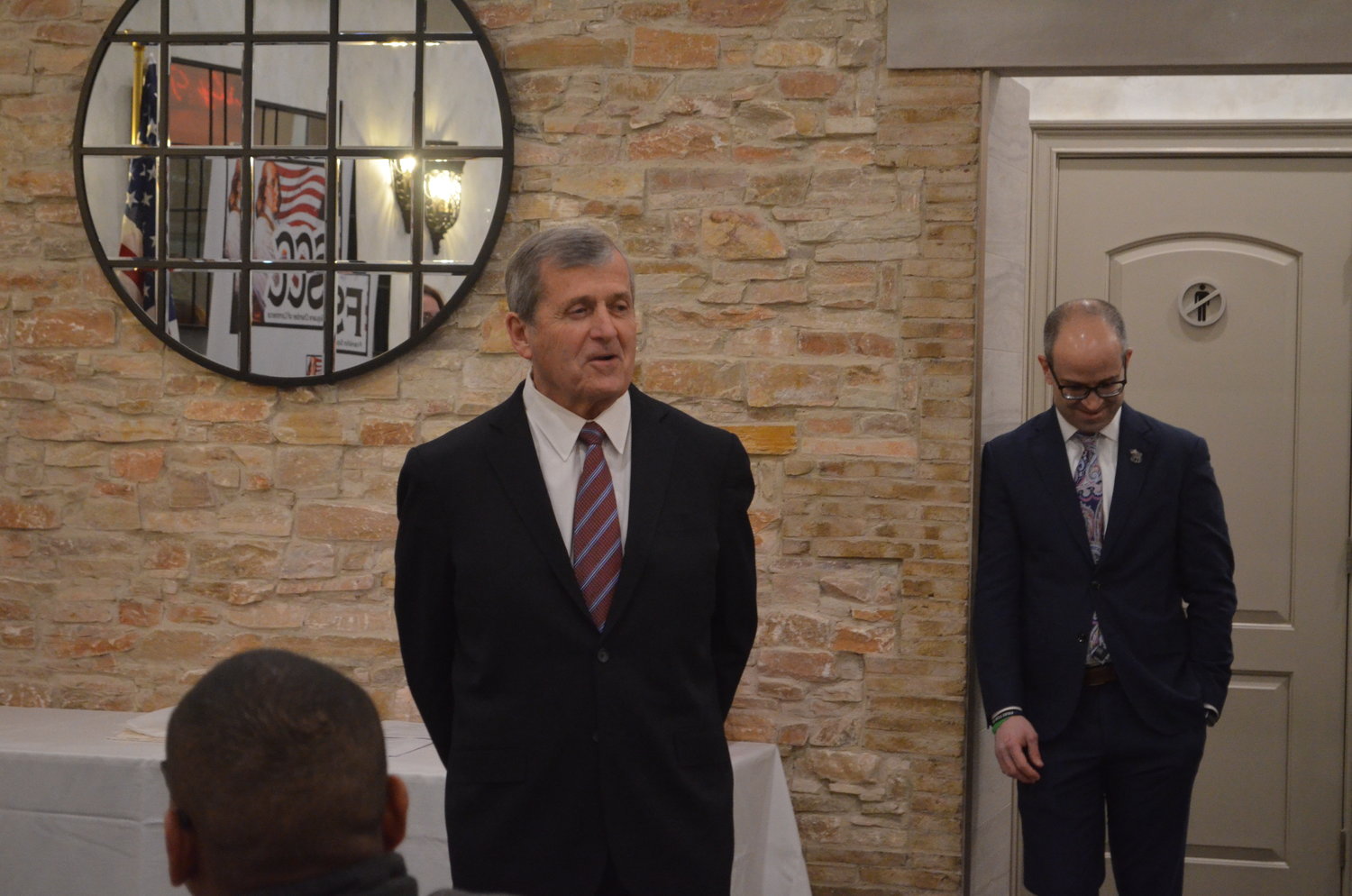 Joe Cairo, chairman of the Nassau County GOP, speaking to the crowd at the Franklin Square Chamber of Commerce meeting on Jan. 11.
Ana Borruto/Herald

The people in the third district should be represented by the person who they really elected.”
Joe Cairo, Chairman, Nassau County Republican Party
By Ana Borruto

Joseph Cairo, the Nassau County GOP chairman, made an appearance at the Franklin Square Chamber of Commerce’s first meeting of the year to congratulate the newly sworn in board members and address the elephant in the room — Republican Congressman George Santos.

He joked that the Republican Party had an “eventful” day at the Nassau County Republican Committee headquarters on Jan. 11, referring to the news conference where local GOP leaders called on Santos to resign after his trail of fabrications.

“He’s a human being — I feel sad for him as a person, but he fabricated, he misled and he lied,” Cairo said to the chamber crowd. “Unfortunately, today we as Republicans had to call upon him, a Republican, to resign from office, and I don’t know if he will or not, but I feel it was the right thing to do.”

He also discussed the recent mid-term election and said the Republican Party won the House of Representatives by “a very slim margin.”

And then there are the Republicans representing Nassau County in Congress: Anthony D’Esposito and Santos, who Cairo said received 54 percent of the votes for House representative.

Santos is under fire for alleged fabrications about his resume, which includes his employment at Wall Street firms such as Citigroup and Goldman Sachs, where he attended high school and his graduation from Baruch College, his income history, Jewish heritage, his animal charity and more.

More recently, his campaign fundraising has come into question, and he now faces an investigation by the Federal Election Commission after complaints were filed by the Campaign Legal Center and Accountable.US.

“We elected a myth and shame on us,” Cairo said. “He came from Queens County recommended by the Queens Republican Party and shame on us for perhaps not looking deep enough.”

At the news conference earlier that Wednesday, Blakeman stated all constituents who have Santos as a representative should refer to D’Esposito’s office for assistance with their issues.

Those that can’t go to D’Esposito will be redirected to the offices of U.S. Sens. Chuck Schumer or Kirsten Gillibrand — both Democrats.

Santos himself is ignoring the call of many to resign and said he will not step down.

Cairo said if a special election becomes necessary, the Nassau GOP will do the best they can to find the right candidate, regardless of party affiliation, who will best represent the people of the Third Congressional District.

“The vote in Washington as a member of the majority in the House is important,” Cairo said. “But more importantly, is that the people in the third district should be represented by the person who they really elected.”