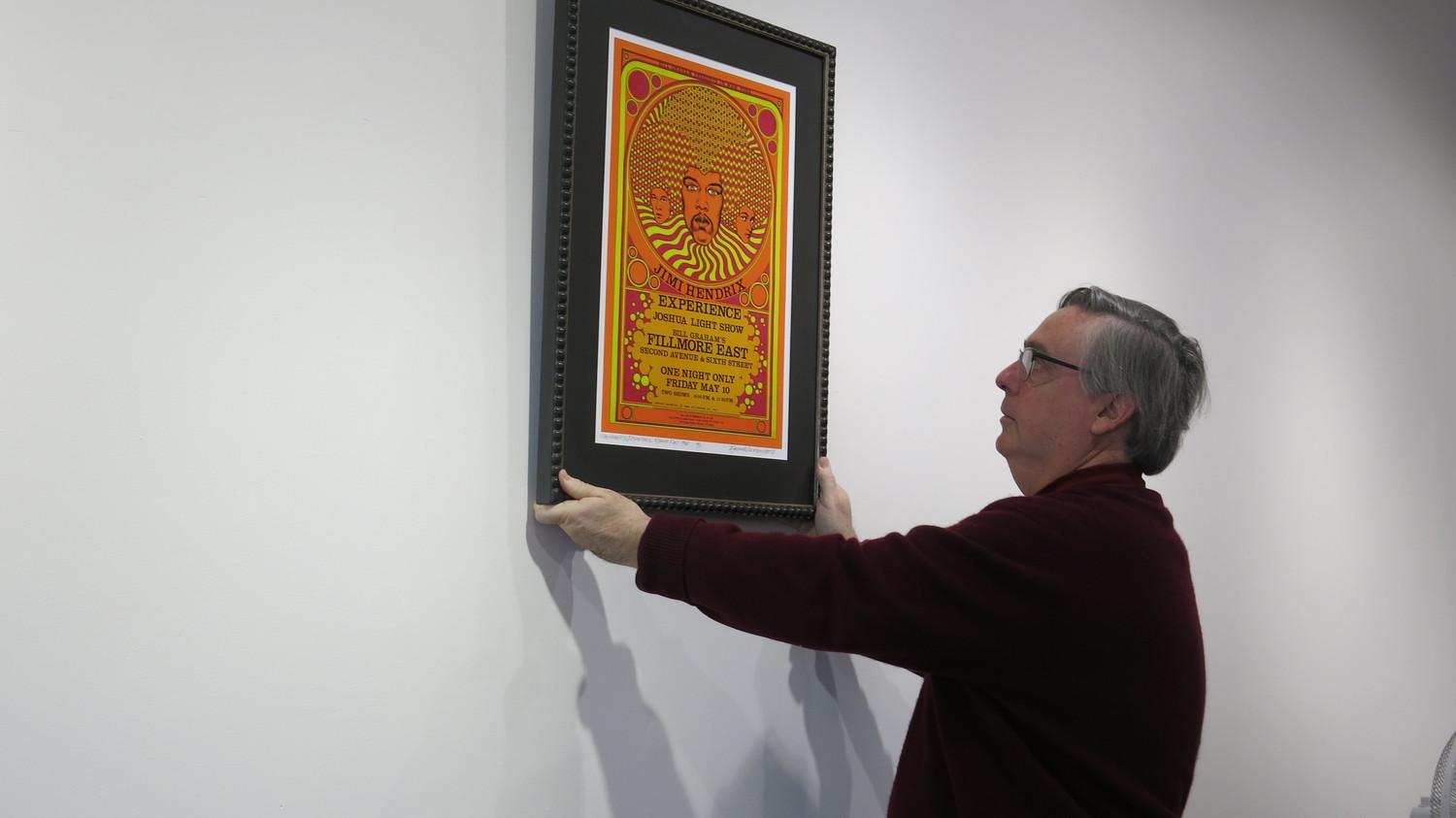 Ted Bahr, the owner of Oyster Bay’s Bahr Gallery, has all kinds of psy- chedelic concert posters available for purchase or viewing.
Photo by Laura Lane 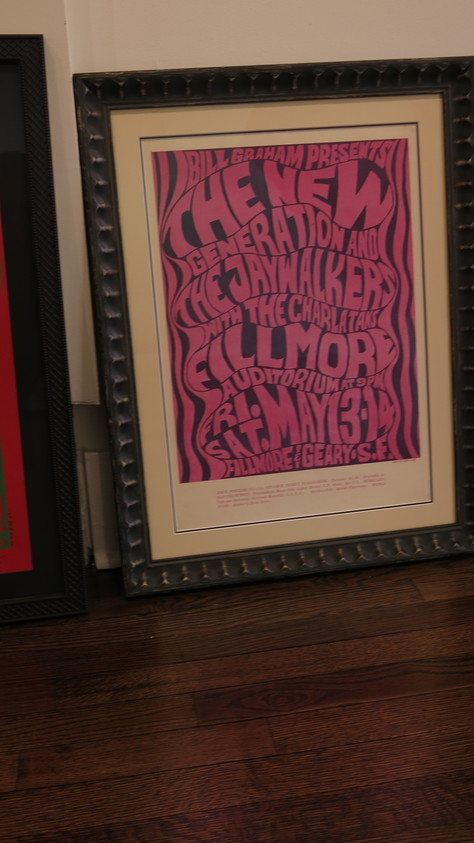 A poster advertising a concert at the Fillmore is one of many posters at the Bahr Gallery.
Photo by Laura Lane
Previous Next
By Laura Lane

Do you remember Alton Kelley, Stanley Mouse, Victor Moscoso, Rick Griffin and Wes Wilson? Maybe not, but if you’re of a certain age, you more than likely can remember the works they created.

Known as the Big Five, they were often collaborators in the late 1960s, creating psychedelic rock concert posters. And their goal was not only to promote the concerts. It was to “engage and entertain the viewers for as long as possible,” said Ted Bahr, the owner of a new Oyster Bay gem,the Bahr Gallery, at 95 Audrey Ave.

The gallery, at the former location of Ben’s Garden, is a treat. A blast from the past, it has a black light room, music from the 1960s and walls filled with art promoting bands that were often considered revolutionary.

“We don’t sell posters,” Bahr said. “We sell art, which appeals to baby boomers that are nostalgic. The sports’ memorabilia are huge, but there’s nothing like this.”

The original market for psychedelic concert posters had a relatively short life, from 1966 to 1970, before concerts moved to larger venues like Madison Square Garden. “The work of the Big Five is from when rock and roll was a cottage industry,” Bahr explained. “When there were light shows.”

The gallery functions partly as a museum. Placards accompany the artwork, describing not only the work, but what was going on when it was created. “This is more than a gallery,” Bahr said. “There is so much history here for people to learn about.”

Some of what visitors will find is information on what was happening in San Francisco, where the movement was based. When people think of the 1960s, “they think of this stuff,” he said. “Just as guitars are meant to be played, these posters are meant to be hung and enjoyed.”

Bahr, 59, has no experience in art. In fact, he majored in urban studies in college, which was also when he started collecting posters. Raised in

Westchester, he moved to Laurel Hollow in 1998.

He began collecting even more posters during the 15 years he lived in San Francisco in the 1980s and early 1990s. Bahr owned BZ Media, a high-tech publishing company, for 19 years. “There were lots of white walls at the BZ Melville office,” he said. “So I put the posters up. That led to deciding to have a show for my friends.” Forty-five people came.

“They were thrilled,” he said. “My wife, Rebecca, said, ‘You should go into business and sell these.’” He sold his company last year and is now beginning the career of a lifetime in Oyster Bay.

“I’ve been a big fan of this for a long time,” he said. “This is for the baby boomers who have already paid for their kids’ college who are out of the house. All they have left are their memories, which is why they pay $500 to see Bruce or Billy.”

The works on display, most of which are first printings, sell for between $1,200 and $10,000. Many are familiar, because they were later mass produced.

Oyster Bay-East Norwich Chamber of Commerce President Alex Gallego said he was thrilled that Bahr choose Oyster Bay as the location for his gallery. “The chamber believes this is the type of business that will move the hamlet forward,” Gallego said. “It will strengthen tourism in our community.”

The Long Island Picture Frame, owned by Jim Perna, the chamber vice president, has been doing well in Oyster Bay. “Jim and he see a synergy to work together, ”Gallego said. “Each of them is unique in their own way. Together they will have creative opportunities and can promote each other.”

The Guardian asked Bahr why he decided to open his gallery here. “I didn’t want the foot traffic of Huntington, because people off the street won’t usually pay $3,000 for a poster,” he said. “Here people have disposable income. And there’s always a market for people who want the best.”

A ribbon-cutting ceremony hosted by the chambe is scheduled for Sunday, April 8, from 4 to 6 p.m. The Bahr Gallery can be reached at (516) 283-1967. Available by appointment.