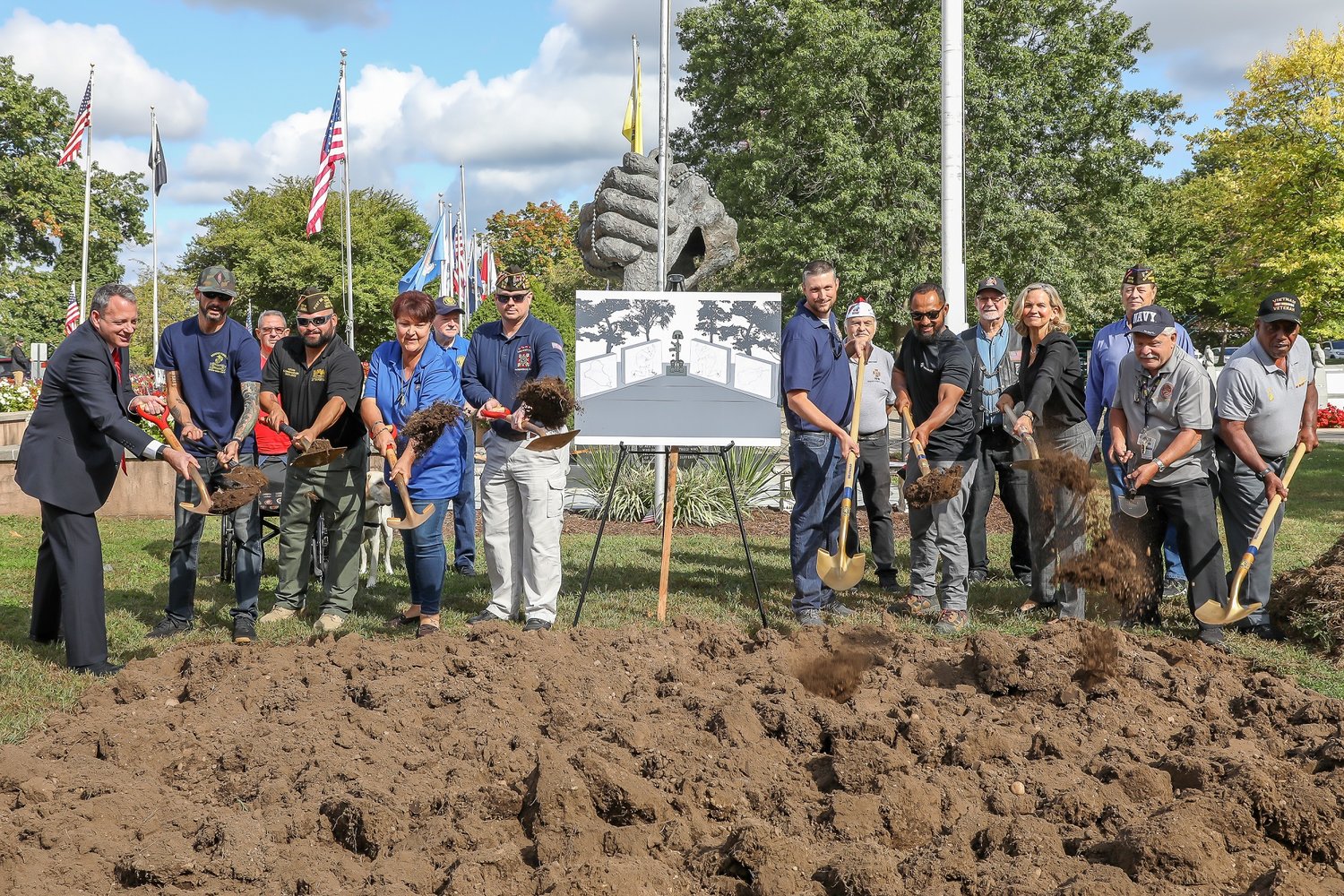 A country that forgets its veterans forgets itself, and that is why we create memorials for our wars and our defenders.”
Pete Wenninger, Commander, East Meadow American Legion Post 1082
By Mallory Wilson

It’s important to honor those who served our country because it shows their actions didn’t go unnoticed, said Stephanie Rossetti, commander of East Meadow Veterans of Foreign Wars Post 2736. And it shows that the country is appreciative and thankful.

“We remind future generations of our service,” Rossetti said. “It teaches the younger generations that veterans are important. These people deserve to be honored.”

And they will be. It was announced at Eisenhower Park last week that those who served in the Iraq and Afghanistan wars will be honored with a new memorial.

On Oct. 7, the 20th anniversary of the deployment of troops to Afghanistan, Nassau County officials broke ground on the memorial. It is expected to be completed sometime next year.

“We need to recognize our veterans,” said Pete Wenninger, commander of East Meadow American Legion Post 1082. “A country that forgets its veterans forgets itself, and that is why we create memorials for our wars and our defenders.”

The monument, which will be included in the park’s Veterans Memorial Park, will be the first of its kind on Long Island and one of the first in New York state dedicated to the Iraq War. It will join other memorials in the park that honor branches of the armed forces and veterans who served in World War II, the Korean War and Vietnam War.

The concept for the memorial is credited to Acting Nassau County Attorney John Chiara, who served in Afghanistan and remains active in the Army Reserves. The memorial’s construction will be a joint project of Heroes Among Us, a Glen Cove-based nonprofit that supports veterans across the region, the United Veterans Organization of Nassau County and local Veterans of Foreign Wars posts.

Veteran John Sottnik, commander of American Legion Post 1273 in Wantagh, said all veterans have made sacrifices and should be recognized for their efforts. “Every war is an individual pursuit, none are the same, and they all deserve their recognition for their sacrifices,” said Sottnik, who served in the Iraq War in 2006.

The monument, designed by 23-year-old Franklin Square resident Maya Fernandez, will feature a battlefield cross flanked by two marble walls. The walls will display images of a kneeling male soldier, a kneeling female soldier, and maps of Iraq and Afghanistan.

“We’re excited to have the assistance from our community to properly respect and honor our veterans in building this monument, which we feel was overdue,” Virginia Cervasio, founder of Heroes Among Us, said in a statement.

The memorial will not include the veterans’ names, but may display a ribbon to highlight service members who died by suicide after leaving the service.

“Now, finally, our most recent conflicts will be memorialized as well,” County Executive Laura Curran said at the groundbreaking. “With this memorial, we finally get to honor the next generation of Americans who have chosen to serve.”

The monument is projected to cost $150,000 to $200,000, said Matthew Schmidt, president of the Nassau Police Veterans Association. “It’s an honor that we get to do this for the veterans out there,” he said. “This is for Desert Storm, Iraq and Afghanistan veterans. They can come here and they can reflect about their service, about the service members and friends that they lost while they were overseas, and it’s also for the families that lost service members overseas.”

There will be a fundraiser on Friday at BrewSA in Freeport to raise money for the memorial.

“As the county commander for the Nassau County Council VFW, I am pleased to be able to assist with this important memorial,” Christian Peterkin said in a statement. “This monument is a tribute to our Afghanistan and Iraq veterans, and this will be another way for us to engage with our fellow vets and get them involved.”