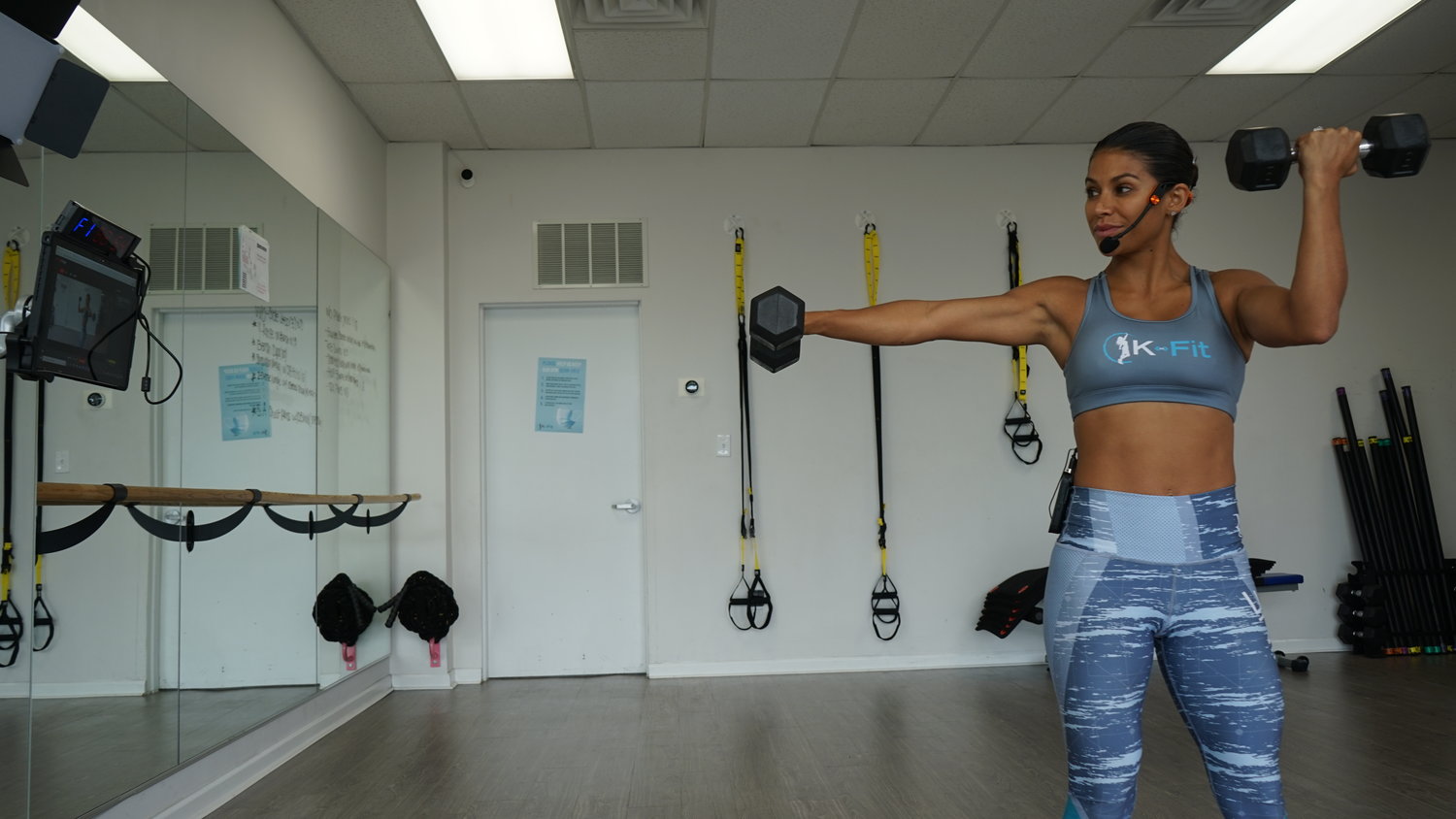 K-Fit Boutique Gym owner Karina Melo demonstrated how she has been conducting her daily virtual workout classes since pandemic forced the closure of her studio space. She plans to reopen in phases as restrictions loosened on Monday, Aug. 24.
Peter Belfiore/Herald 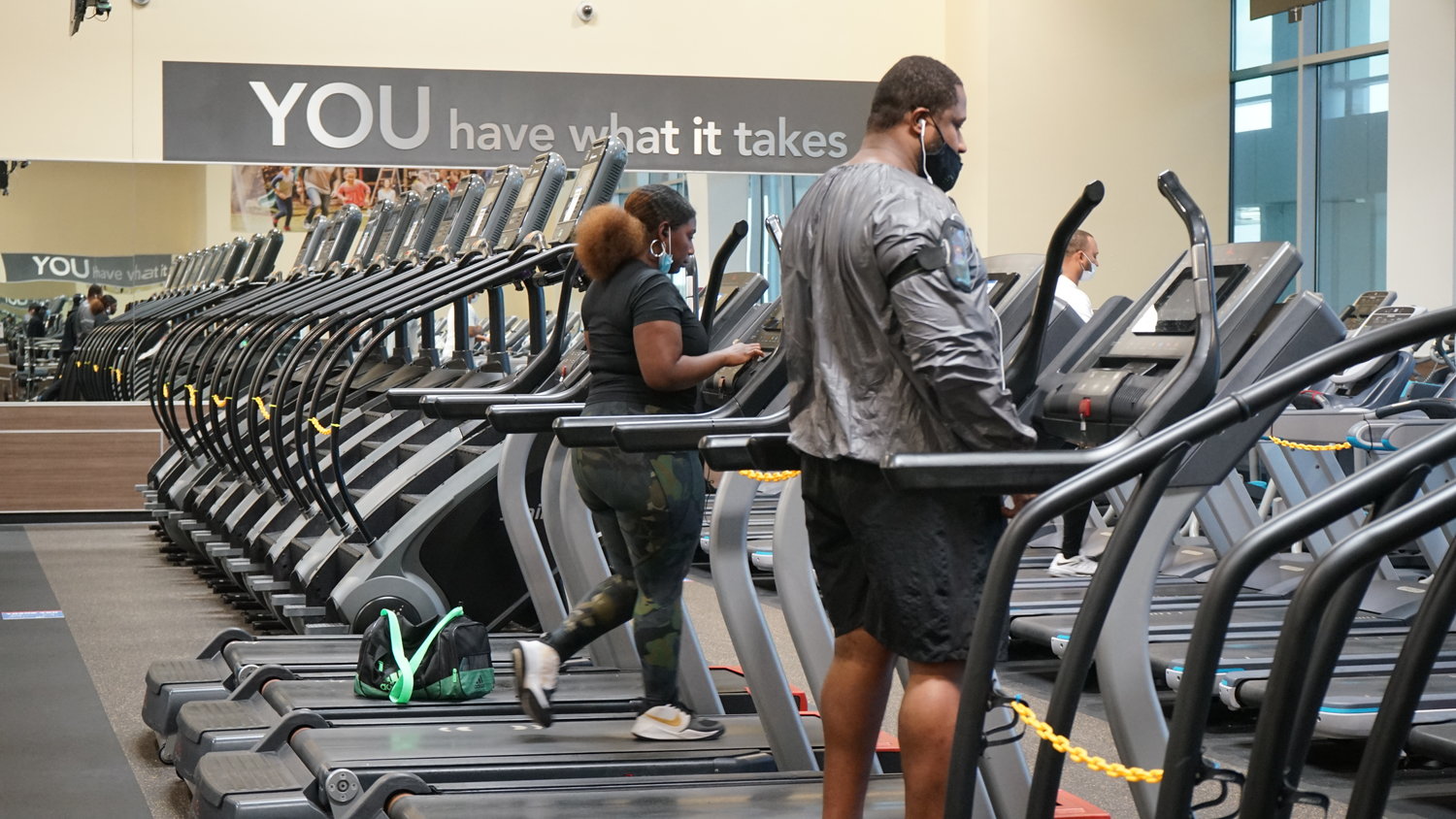 Patrons exercised at 24 Hour Fitness in the Green Acres Commons on Monday, when gyms in New York reopened.
Peter Belfiore/Herald 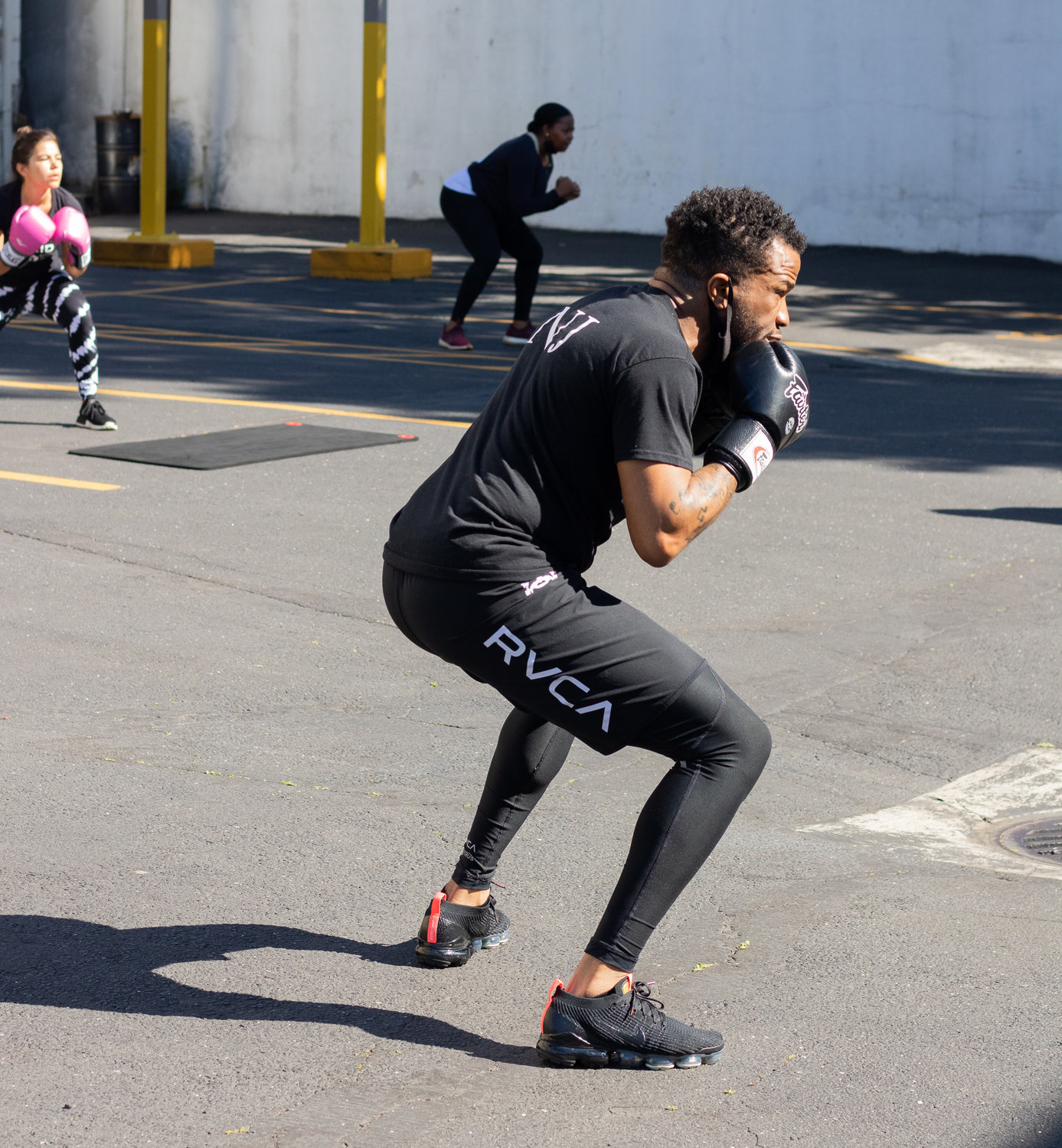 With the advent of warm weather, Melo was able to restart her in-person classes outdoors.
Courtesy Karina Melo 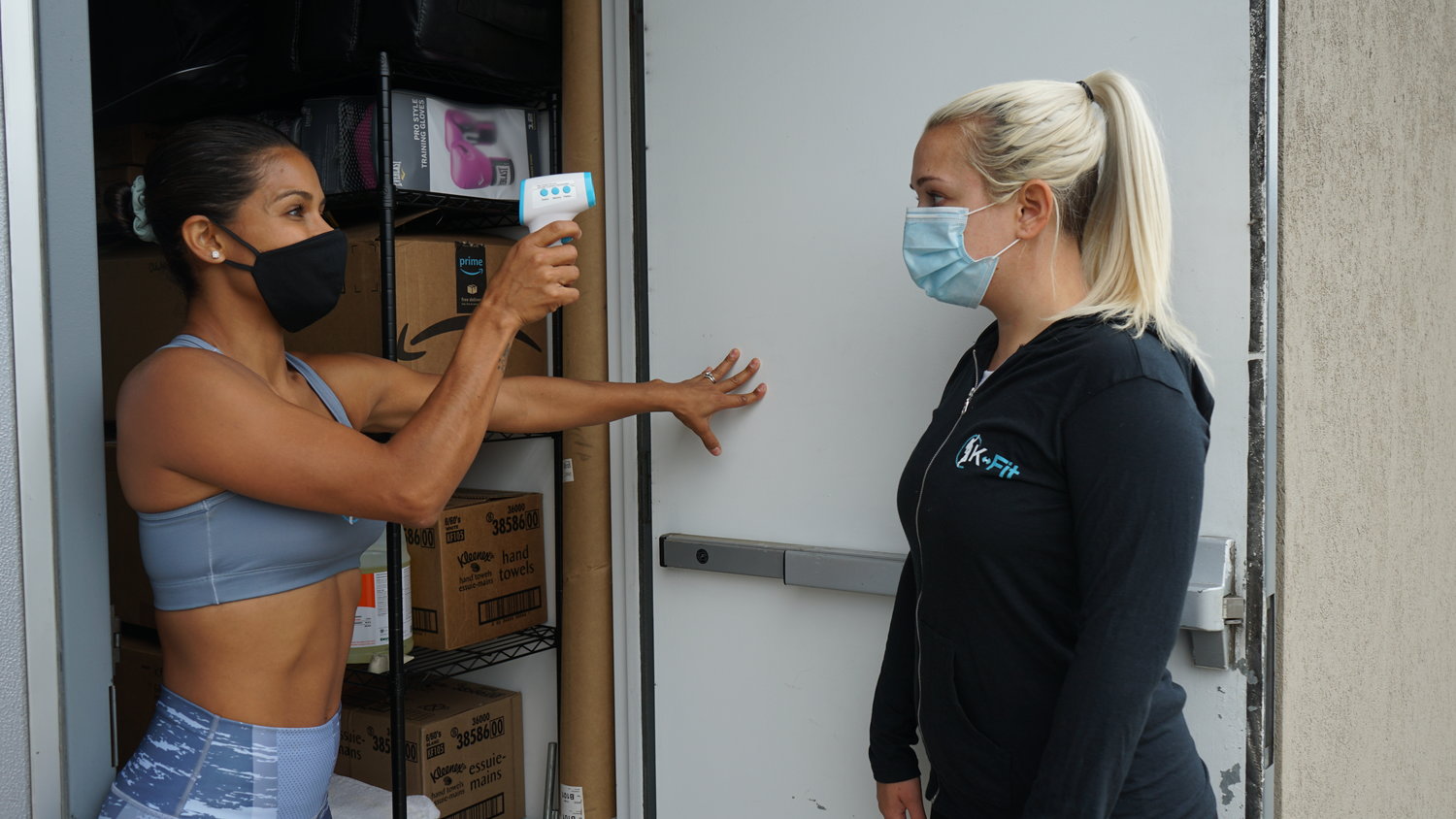 Melo, left, will check her clients’ temperatures before they enter her studio as she restarts indoor classes.
Peter Belfiore/Herald 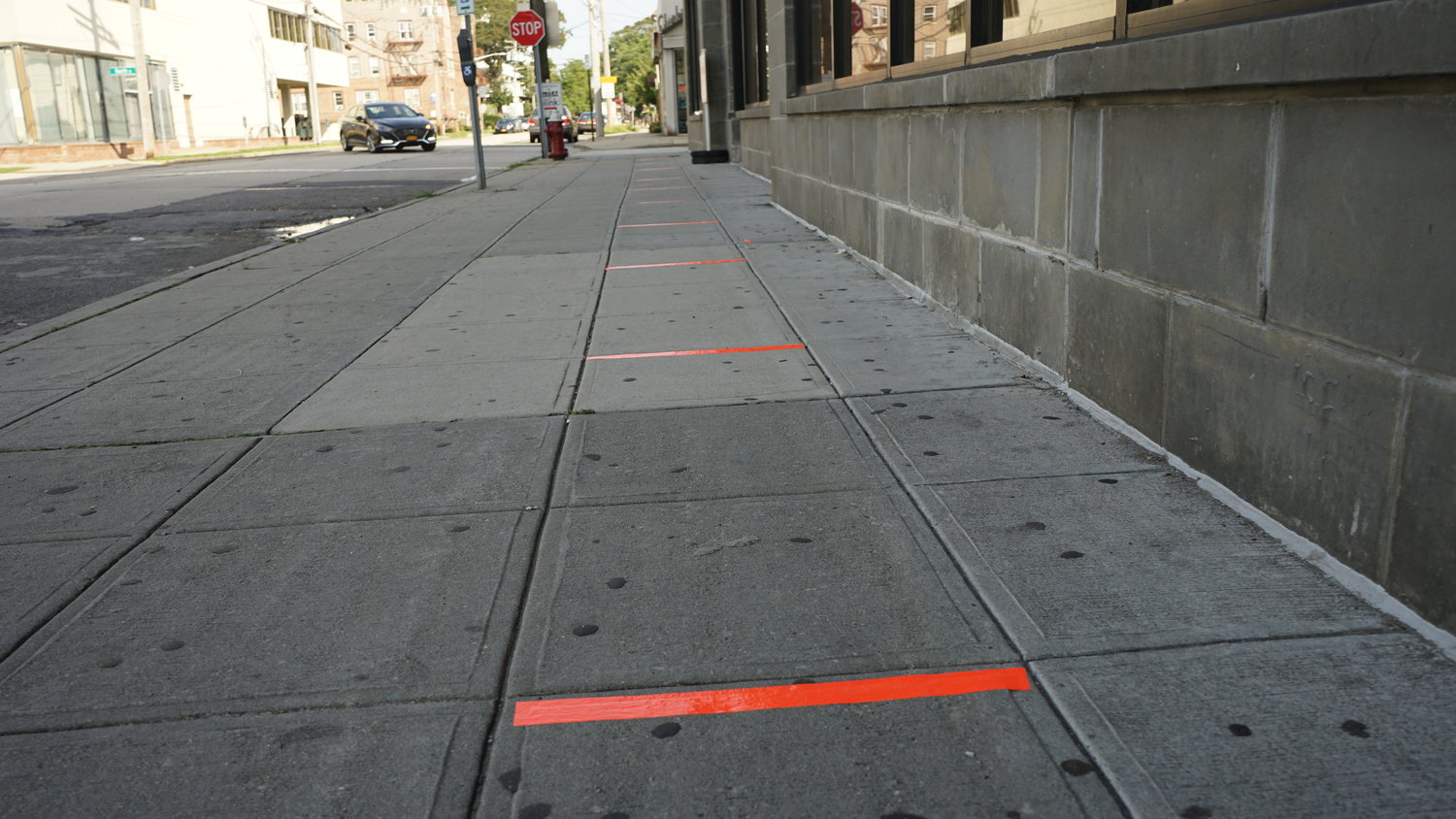 Social distancing markers have been placed outside of Blink Fitness.
Peter Belfiore/Herald
Previous Next
By Peter Belfiore

K-Fit Boutique Gym was created five years ago in the garage of personal trainer Karina Melo’s Valley Stream home. After growing her clientele, and a few iterations of her business, two years ago this month she opened her own gym on South Franklin Avenue, across from the Valley Stream train station.

Since March, Melo, like gym owners across New York, has struggled to keep her business alive, after Gov. Andrew Cuomo ordered gyms to close to help stop the spread of the coronavirus.

“It’s been very difficult to stay afloat,” she said, sitting in her small, brightly lit studio last Sunday. But after five months during which she was forced to pivot to virtual and outdoor classes and launch a GoFundMe page  to help her pay rent, on Monday Melo welcomed back her first group of clients indoors.

“We’re looking forward to getting our whole family back,” she said excitedly.

Melo plans to reopen in phases, first with personal training sessions, before gradually introducing more indoor classes through Labor Day, when she anticipates a full reopening.

“We’re in no rush because we’re talking about people’s health here,” she said. “We want to do it well and do it once.”

Masks are required at all times in Melo’s gym, and she checks visitors’ temperatures at the door. They then must wipe their feet on a bleach-soaked pad before entering the studio. With a 33 percent capacity restriction mandated by the state, classes will be kept to six people, including the instructor. Normally, the capacity is 16.

As a boutique gym, K-Fit offers personal training classes, with an emphasis on affordability and encouragement, Melo said, to keep gym-goers motivated to stick to their goals.

Despite the hardships caused by the coronavirus, Melo said, there have been some opportunities. She initially offered free online classes, which proved popular enough that she eventually began charging for them. In May, she started offering virtual weight loss challenges and, as the weather warmed, she held daily outdoor sessions, splitting time among Long Beach, the Memorial Junior High School track and a private parking lot behind her studio. She also allowed men to sign up. K-Fit initially stuck to a female-only clientele.

With an expanded social media presence, Melo brought on Claire Kennedy, also of Valley Stream, to run public relations for K-fit. Kennedy started as a student at the gym, and said she was drawn to its community feel.

“We’re all rooting for each other,” she said, noting that her 6 a.m. classes there had been her favorite part of her day. The virtual classes have “turned into an extension of what we do here,” she said, adding that Melo now has students tuning in from out of state, and they will continue on after the pandemic has subsided.

A few blocks east on Sunrise Highway, Blink Fitness, at the corner of Rockaway Avenue, also reopened Monday. It is one of nine Blink locations on Long Island, and one of the more popular ones in the area, according to David Collignon, senior vice president of operations for the Manhattan-based gym chain.

The company’s reopenings in New York, Collignon said, will draw on its experience in other states, and he outlined a number of safety procedures to minimize the risk of infection.

“It was really important for us to give members a sense of confidence that they feel safe,” he said.

In addition to state regulations, measures include social-distancing markers, a touch-less entry system and an air-filtration system upgraded with Merv 13 and HEPA filters, which screen most particles out of the air. K-Fit’s studio is also fitted with a Merv 13 air filter.

Machines have been moved, and some have been taken out of use to maintain six feet of distance between them, and Collignon said that maintenance employees sanitize throughout the day and do nightly cleanings with electrostatic spray guns. Additionally, the Valley Stream facility’s showers and water fountains remain closed for now.

With the limited capacity, entrance will be on a first-come, first-served basis, and both gym-goers and employees will be required to have their temperatures taken when entering the building.

Memberships had been frozen since March 16, Collignon said, and will be unfrozen starting next week. Customers, however, can refreeze their memberships if they feel uncomfortable returning.

Collignon acknowledged that the pandemic has been hard on the company, and likely gym-goers as well. For many, he said, exercise “is what they need. Quarantine has been brutal.”

Another local gym, Valley Fitness on Rockaway Avenue, remained closed as of Thursday, Aug. 27, and attempts to contact its owner were unsuccesful. It is unclear whether it will reopen.

At 24 Hour Fitness, in the Green Acres Commons annex, the first gym-goers since March arrived on Monday, and some expressed excitement at finally being able to get back to their workout routines.

Queens resident Crystal Brown had just finished her cardio workout and was moving onto weight training. “It really was killing me,” she said of her inability to attend the gym, especially after just having developed the habit of exercising there after work. She came up with interim solutions such as jogging at the park, but without free weights, it was difficult to replicate the full experience, she said.

Cameron Duff, district manager for 24 Hour Fitness in New York, New Jersey and Virginia, said the Valley Stream location is limiting its capacity to 25 percent, lower than the state mandate, to eliminate the chance for overcrowding.

Gym users will be required to fill out a health survey on the 24 Hour Fitness app, and schedule their workout time before arriving. In addition to assisting with contact-tracing if an infection were to occur, scheduling a workout time means customers can time their workouts to avoid the half-hour every 90 minutes when the location is closed for cleaning.

Additionally, a third-party cleaning crew sanitizes the gym every night after closing. “From a cleanliness standpoint, our clubs have never been cleaner,” Duff said.

Like Blink, 24 Hour has social-distancing markers, and every other cardio machine is blocked off to maintain six feet of distance between patrons. Additionally, the pool, shower, Jacuzzi and sauna facilities will remain closed for the time being.

Another gym-goer, who goes by Al, said that despite the restrictions, such as mask wearing, “I’m just glad to be back.”

He had made do at home with jogs, resistance bands and dieting to maintain his weight, but without the machinery and heavy weights, it was difficult.

After returning, he wouldn’t miss his home routine, he said, adding, “Goodbye, calisthenics.”