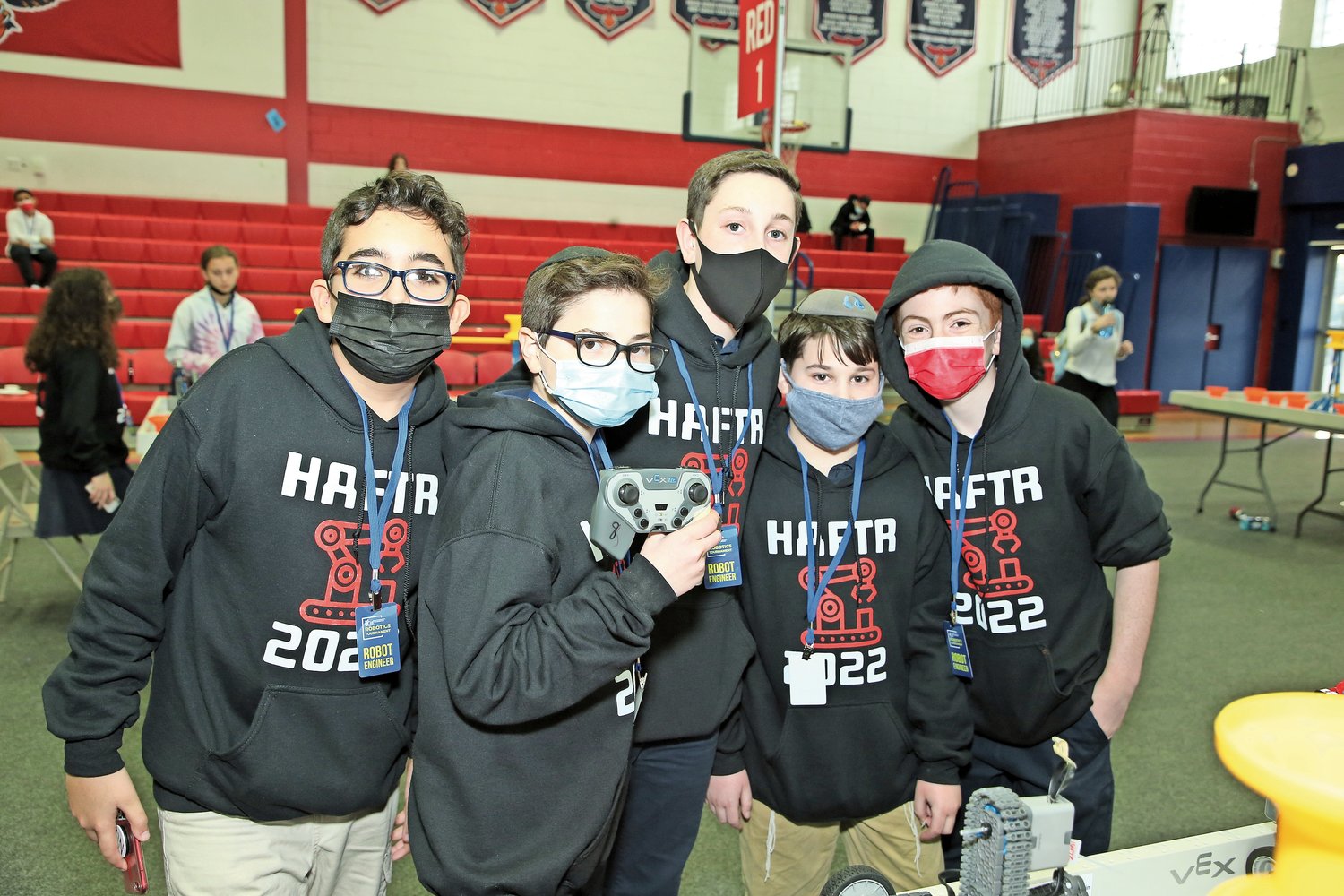 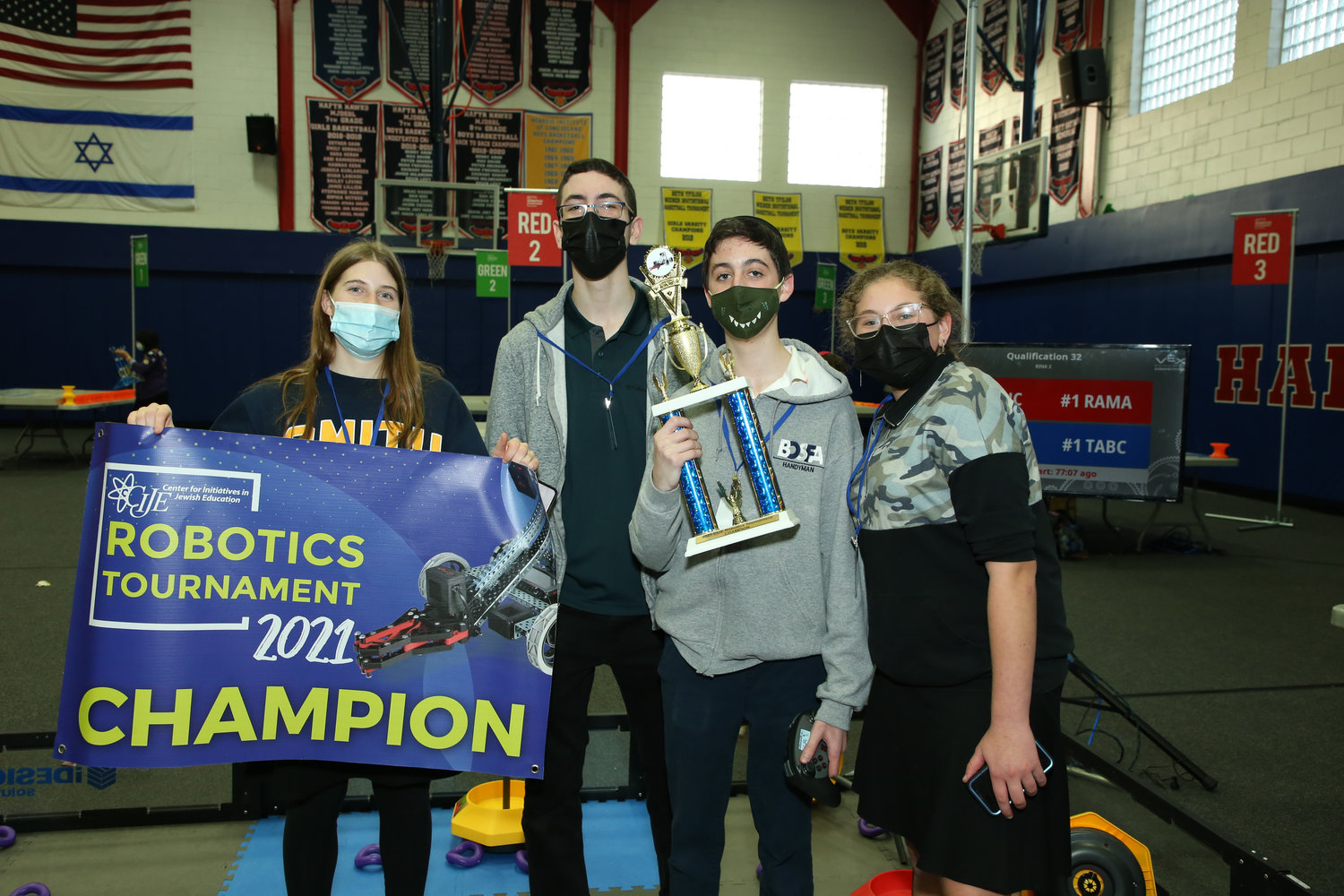 The Hebrew Academy of the Five Towns and Rockaway High School robotics team captured its first-ever first place trophy at the Center for Initiatives in Jewish Education Robotics Tournament on Dec. 16 at HAFTR. From left were Shirly Gottlieb, the Robotics Club president, and team members Sean Harris, Yoni Goldstein and Atara Smulevitz.
Courtesy HAFTR
Previous Next
By Jeff Bessen

From a Hebrew Academy of the Five Towns and Rockaway High School senior who wants to major in engineering in college to a HAFTR Middle School seventh-grader who built his own computer, the robotics program at both levels attracts students who are curious and motivated.

Building on a STEM (science, technology, engineering and math) program at HAFTR’s early childhood and lower school levels, expanding STEM education in the middle school and high school became a mission five years ago. That was when Gittel Grant joined the staff. She serves as the middle school’s STEM chair and the school’s robotics coach.

“STEM is a big passion of mine,” Grant said, sitting at one of the fireproof tables in the middle school robotics room. “We call it 21st century learning, instead of going with textbooks that were written 50 years ago. It’s more of the idea there is more learning you need to be successful in this world.”

The students at both the middle and high school learn what are called hard skills: coding, engineering and mechanics. Then there are the soft skills: collaboration, iteration (the repetition of a computational or mathematical process), refusing to surrendering to failure and thinking outside the box.

“Dealing with success and failure, frustrations if the code doesn’t work out, if the hardware doesn’t work, overcoming challenges and team collaboration” are all what the students learn, said Rabbi Baruch Noy, HAFTR’s director of STEM and education technology.

The 2021 Center for Initiatives in Jewish Education Robotics Tournament, on Dec. 16, was hosted by HAFTR, whose middle school teams swept the top four playoff berths, and the team of Akiva Cunningham, Ezra Goldstein, Joe Walls and Jack Ymar captured the middle school championship.

There are eight HAFTR Middle School teams with a total of 40 students. More than 300 middle school and high school students from more than 25 Jewish schools competed.

“The feeling was amazing,” Ymar said. “It shows that hard work pays off. I know, me and the team that I was on, we worked very hard on it. We all played a special part in building the robot.”

A first-timer in the robotics room, Ymar, a seventh-grader, said the eighth-grade students were welcoming and shared their knowledge. Ymar also had some skills to share. As someone who “always loved technology,” he said, he built his own gaming computer at home.

In the High School division, HAFTR High was paired with the Frisch School in the championship round, and won the school’s first robotics trophy at the high school level. “I like the opportunity to show my skills,” said sophomore Yoni Goldstein, who has been involved in robotics since eighth grade. “I like meeting everyone that gets involved and showing support for the school.”

The CIJE, in partnership with Jewish schools across the metropolitan area, created a yeshiva league for robotics, because most of the existing leagues meet on Saturdays, Grant said, a hardship for observant Jews because of Shabbos.

“The idea with robotics is not just that [students] have experience with coding [and] the mechanics,” she said, “[but] they see themselves being good at something that isn’t in a typical school setting, and it expands their mindset in terms of possible careers in the future.”

Engineering most likely will be HAFTR High senior Shirly Gottlieb’s major in college. “I love it,” said Gottlieb, who combines her passion for robotics with a love of sports, playing high school basketball, hockey, softball and soccer. “I always like knowing how the world works, and HAFTR inspires everyone to get involved.”

Robotics dovetails with HAFTR’s overall science curriculum. Grant noted that in order to avoid excluding anyone, since students come not only from the Five Towns but also from other communities, like Long Beach and Brooklyn, the robotics program is built into the school day.

The students, she said, spend at least one lunch period a week in the robotics room, come by during free periods and, as a competition date nears, “It’s every single day.” There is expected to be another CIJE robotics tournament in April.

“We are extremely proud of our students and [of] providing them new opportunities in engineering, as a strong STEM program is for all,” Noy said. “All students in STEM can succeed if they put in the time.”