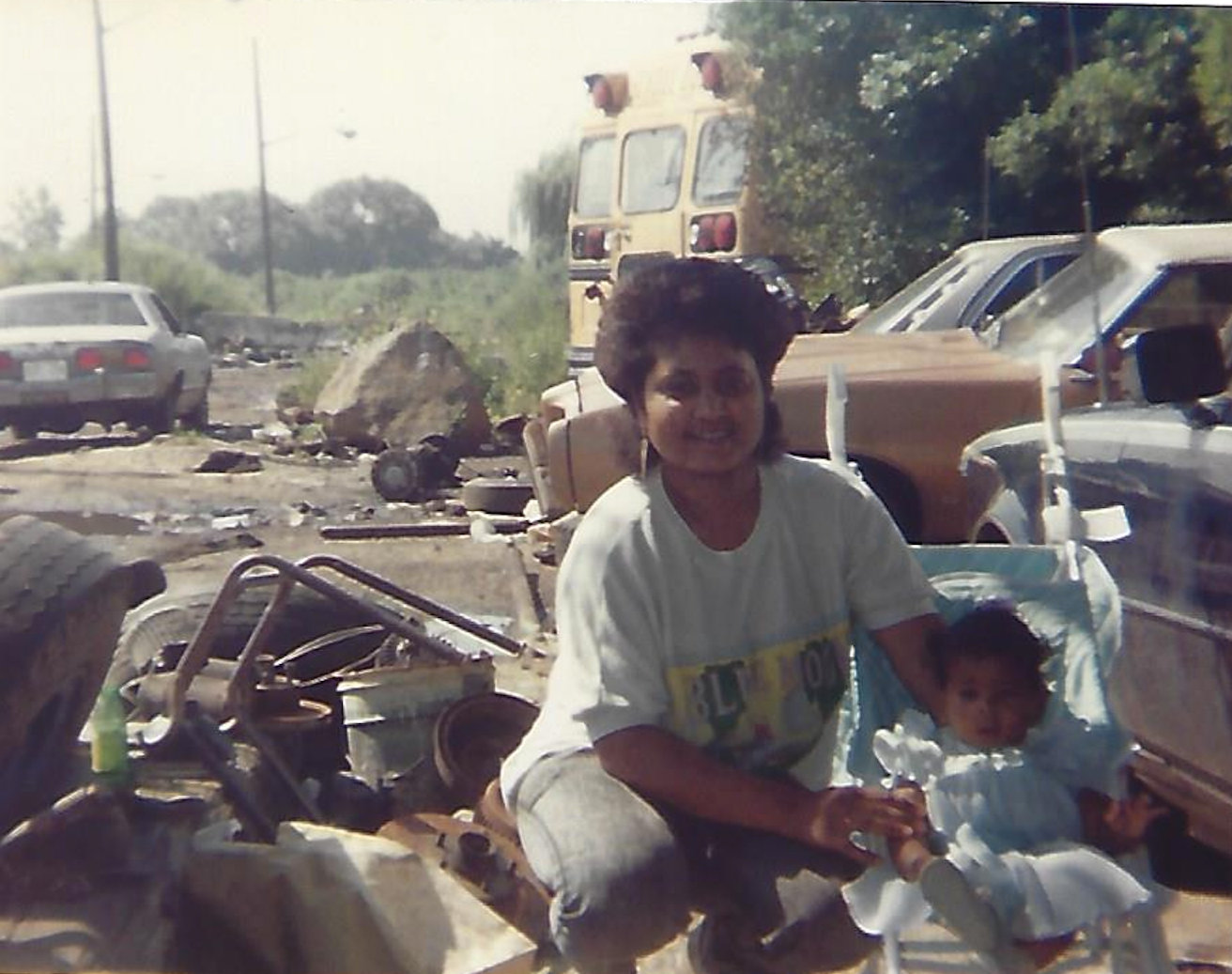 Longtime Valley Streamer Orville Davis — the toddler at right — with his mother, Sonia, at his father’s Queens scrapyard, circa 1990. Davis now has his own eco-friendly scrap-hauling business.
Courtesy Orville Davis 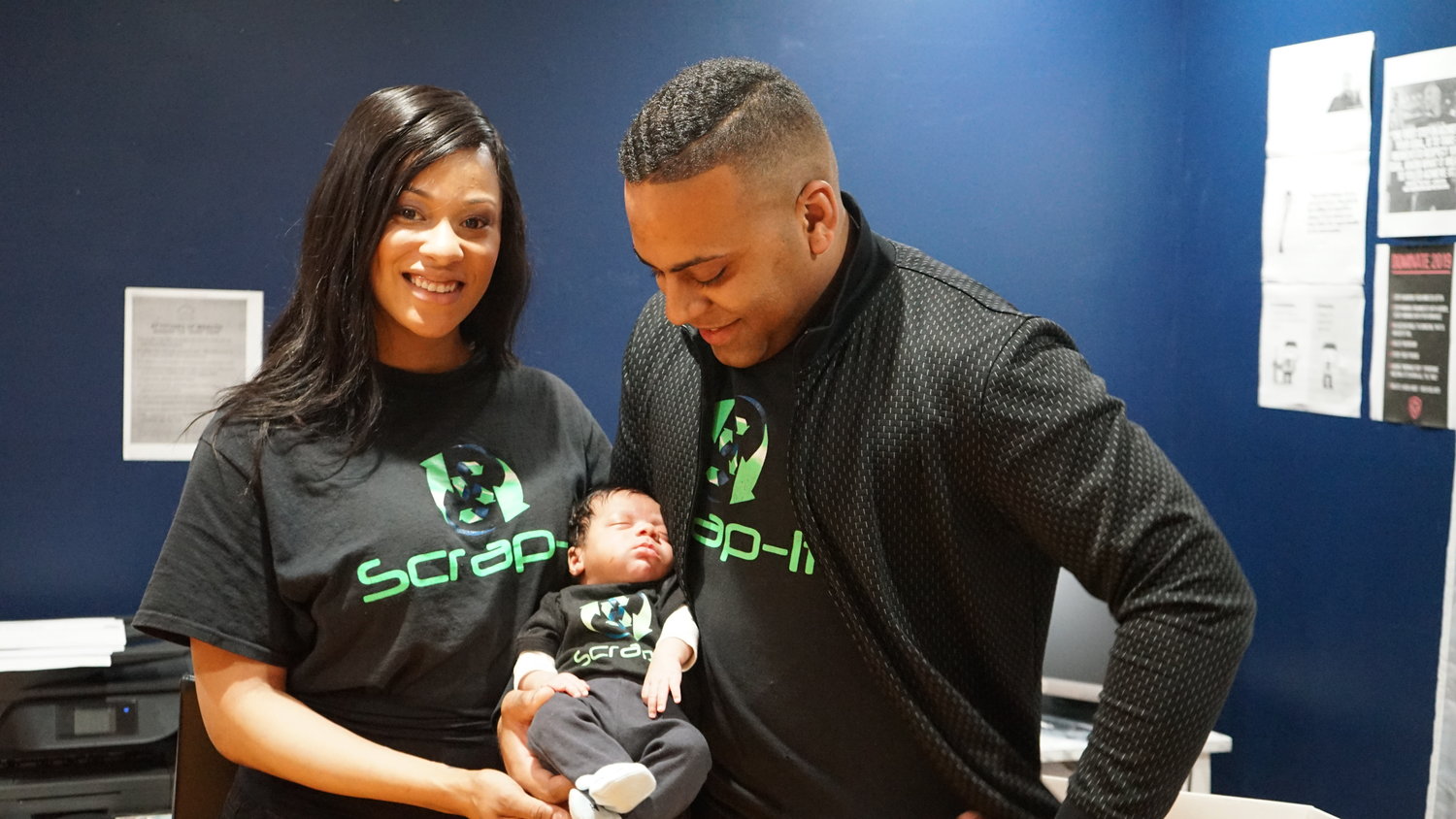 A teenaged orville with his father, Winston, when the two lived in Valley Stream. Winston died suddenly when Orville was 19, and he said he hoped to carry on his legacy as a junk-yard owner through his new business.
Courtesy Orville Davis
Previous Next
By Peter Belfiore

Longtime Valley Stream resident Orville Davis says he was born in a junkyard.

Quite literally, actually. On May 1, 1989, his mother, Sonia, went into labor while she was helping his father at his scrap-hauling business in Queens, and gave birth in the office.

Living in Valley Stream from age 3 to his early 20s, Davis spent his formative years in that yard, learning the business alongside his father, Winston. It was also there, he said, while roaming the jagged metal landscape, that he noticed the valuables people routinely discarded.

He had envisioned that he would spend the rest of his life working that yard, but tragedy took that away from him.

Shortly after Orville graduated from South High School in 2007, his father suffered a stroke, lapsed into a coma and died. At 19, Orville was forced to drop out of Nassau Community College to take over the business. But soon family squabbles over the yard pushed him out, and it was divided up and sold off.

“That was heartbreaking,” Davis, now 30, said of losing his father’s business. “. . . You thought this was going to be your life, and it comes to an end. I don’t even have the words to explain what that was like. It was like my father’s memory going into the abyss.”

Out of it, however, emerged the inspiration for Davis to form his own eco-friendly scrap-hauling business, which seeks destinations for discarded items that might find a use for them, such as charity thrift shops and recycling centers. Scrap-It! currently exists as a website, but the entrepreneur plans to take it to a phone-app format, and has pitched the concept at various business competitions, winning a total of $23,000 in funding for the idea.

But first, he had to start over. “I thought someday, somehow I’m going to honor my father’s memory and fulfill his legacy,” he said.

Davis returned to NCC in 2013, and seeking to build more experience in business, began working in a managerial role at a newspaper company, and later a software company for tech experience.

After earning his associates degree in 2015, he enrolled at Farmingdale State College, pursuing a degree in business and computer programming.

There a professor encouraged him to enter a campus business competition in 2018 in which teams were tasked with inventing a business solution to a real-world problem.

The idea for Scrap-It! came to Davis on a whim, and he jotted it down in a notepad, later dusting it off when brainstorming ideas to pitch to his competition teammates. Among them was his future wife Cynthia Sainteus, who was studying bioscience at Farmingdale at the time, and who filled in after another teammate dropped out. The two met at Nassau, and Davis moved out of Valley Stream to live with her in 2014.

Cynthia helped develop the business plan for the judges, and filled in gaps that Davis had not considered. She has continued to work alongside him, helping co-found Scrap-It! and serving as its chief operating officer.

“It’s been very challenging,” she said, noting that she had to learn much about operating a business in a short time. “It’s been a fun journey.”

The judges at Farmingdale liked the concept, and awarded Davis and his team $1,000.

“That was where I thought this idea has life, and we should move forward with it,” Davis said.

So he applied to a series of additional business competitions, first to the e-Fest Schulze Entrepreneurship Challenge in Minnesota, hosted by Best Buy founder Richard Schulze.

There, Davis and his team went up against 25 others from across the country as the only one selected from New York. Although his group didn’t earn a prize, he said the business connections and ideas he came away with were worth it.

“I came back with so much more,” he said.

Then, Davis and his teammates entered another competition while still at Farmingdale State, moving up through the campus, and regional levels. They didn’t place, but their showing prompted an honorary selection to send them up to Albany for the finals, where they won a $10,000 prize.

Davis earned his bachelor’s degree in the spring, 2019, and is currently pursuing an MBA at Stony Brook University, where he entered another business competition this fall, going up against teams from across the Island, and netting his idea an additional $10,000 in funding.

“Now we’re feeling a little better about ourselves,” Davis said, so work on the Scrap-It! app began in earnest. Due to its complexity Davis and his team realized they would need to start bringing in revenue before it could reach full functionality.

A business is born

They launched the Scrap-It! website, and began building a network of scrap haulers operating in Nassau, Suffolk and Westchester counties as well as New York City. Davis plans to take the business nationwide. So far he has secured more that 100 haulers, and the reaction from customers has been positive, he said.

“The beautiful thing is it’s not just junk we’re moving,” Davis said. “We determine what’s reusable and donatable, and we bring them to charities and recycling centers.”

As part of the service, Scrap-It! sends a notification to customers telling them where their items ended up. “It makes them feel good,” he said, noting the peace of mind that the items have been reused or recycled.

The effort to build his business around an environmental problem is in response to what Davis describes as the “waste epidemic” affecting countries around the world, most notably the United States.

For decades America’s recycling industries were based around China’s willingness to cheaply accept garbage and mixed recyclables, reusing the resources or placing them in landfills. That all ended in 2017, when the environmental toll the practice had on China’s population became too much, and the country began closing its doors to the world’s waste, according to reports from major news outlets.

Davis said he would like Scrap-It! to help bolster the United States’ industry, which now faces skyrocketing costs, and make recycling more feasible through his hauling network.

It’s been busy, with Davis often making deliveries while attending school. And if building a business under those conditions might seem difficult enough, in December, he and Cynthia welcomed a son, Kingston. The couple currently lives in Massapequa Park.

In addition to meeting an environmental need, Davis said his business has been a way to reconnect with his late father.

“It’s comforting,” he said, “that my dad was there with me for this journey.”