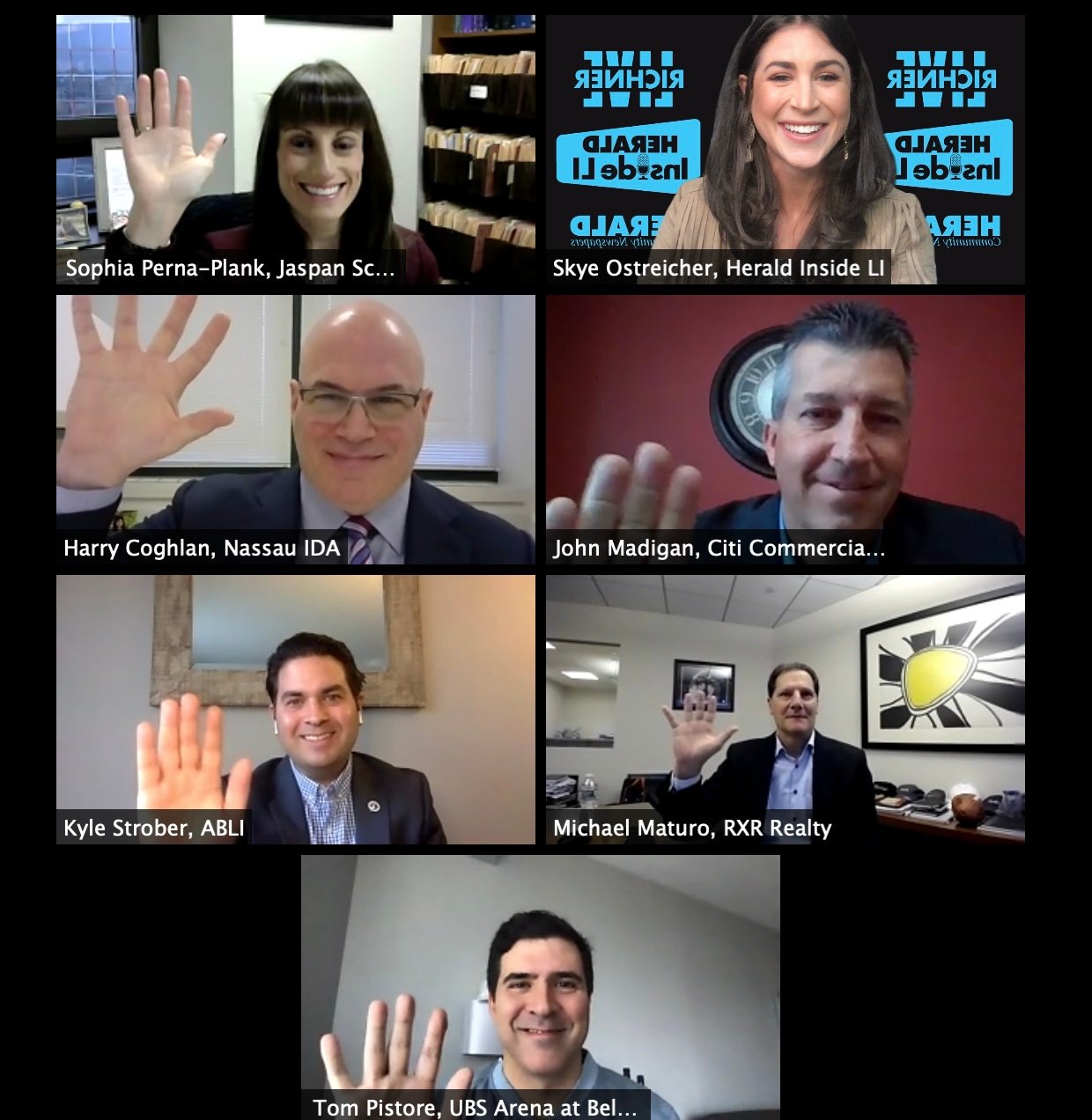 Skye Ostreicher, of Herald Community Newspapers and RichnerLive, moderated the discussion. RichnerLive produced the webinar and started the Herald Inside LI series in August to spark conversations about how the Covid-19 crisis has impacted life on Long Island. In this webinar, the big questions were: How has commercial real estate been impacted, and what does this mean for Nassau’s economy?

One of the newest commercial projects in the works is the UBS Arena at Belmont Park, being built on Hempstead Turnpike in Elmont, which will open with the Islanders 2021-22 hockey season.

Pistore said he sees the project as a “beacon in the community” during this dark time — it will create 10,000 construction jobs, 3,000 permanent jobs and build a new railroad in Elmont, he said. He noted that the build is following the “three S’s” — sanitization, security and sustainability. He also said that developers are working closely with partners, such as Northwell Health, to create a diversity and inclusion plan to ensure the community benefits from the project.

Maturo, whose company is developing the Nassau HUB near Nassau Coliseum, noted that before the pandemic, there was a real interest in creating vibrant, walkable downtowns on Long Island. While this still stands, there are now many more factors involved, including people staying home more than they used to. People are also working from home — Maturo said his commercial office buildings are only 10 to 12 percent occupied at this time — and there is an influx of people moving from the city to the suburbs.

Taking all of this into account, Maturo said he believes that post-pandemic, once there is a vaccine, “there’s going to be an explosion in activity,” he said. “There will be greater connectivity, both literally in terms of how we move between the city and the suburbs, but more so how the suburbs collaborate and integrate with the city in terms of economic activity.”

Maturo advocated for more public transportation in Nassau County’s future, which he hopes to integrate into the Nassau HUB, a multi-use, village-style development.

The pandemic has also brought new companies leasing office buildings on Long Island — as residential real estate has climbed, so has commercial, in markets such as offices and rental buildings.

“We are seeing a lot of our clients, especially from Brooklyn or Queens, are looking to move their facilities out to Long Island,” Madigan said, “so a lot of commercial real estate requests we’re getting right now are companies looking to move out here. Long Island is definitely benefiting.”

Strober added that eventually people will return to their offices, and that will be a plus, as well. He did warn, however, that the economy may need another boost well before things start returning to normal.

“The federal government shot the economy in the arm,” he said, referring to the CARES Act, which offered loans to businesses across the country, as well as stimulus checks and unemployment benefits that allowed people to spend their dollars, “and slowly we’re going to be weaning off that high and we’re going to need another shot.”

Perna-Plank said she represents landlords who lease commerical space to retailers like Pier 1, which recently closed all its brick-and-mortar locations. This puts landlords in a situation in which they need to fill large spaces with new leases.

“Our landlords have to get creative,” she said. “They have to start breaking up these large leasable areas. If they have a store that’s 5,000 square feet, they’re going to have to do some work and chop those up so that they can start filling those spaces.”

As businesses struggle during the pandemic, Perna-Plank also said landlords are working with their tenants to negotiate plans for rent payments.

Coghlan also spoke about his role in aiding businesses that want to open and thrive in Nassau County, such as offering several different types of tax incentives. The Nassau County IDA is one of 109 IDAs in New York and one of eight on Long Island. Its programs help Nassau County’s economy remain competitive with surrounding regions, the panelists said.

“We address the affordability,” Coghlan said. “There’s a lot of discussion about PILOT programs and things we do… We’re not giving corporate welfare; we're not destroying the tax base of Long Island. It’s frustrating when we work hard on a great project and you just see ‘tax breaks’ in the headline …

“I look at it as tax creation,” he continued. “We’re not going to do anything that’s going to destroy the tax base. We’re only seeking to grow it, which will offset the burden on our residents as we’re working with manufacturing companies and wholesale companies who move here.”

RXR Realty, Citibank and Jaspan Schlesinger LLP sponsored the webinar. Herald Inside LI is a weekly webinar series. To view a recording of this webinar and to register for future ones, visit liherald.com/insideli.