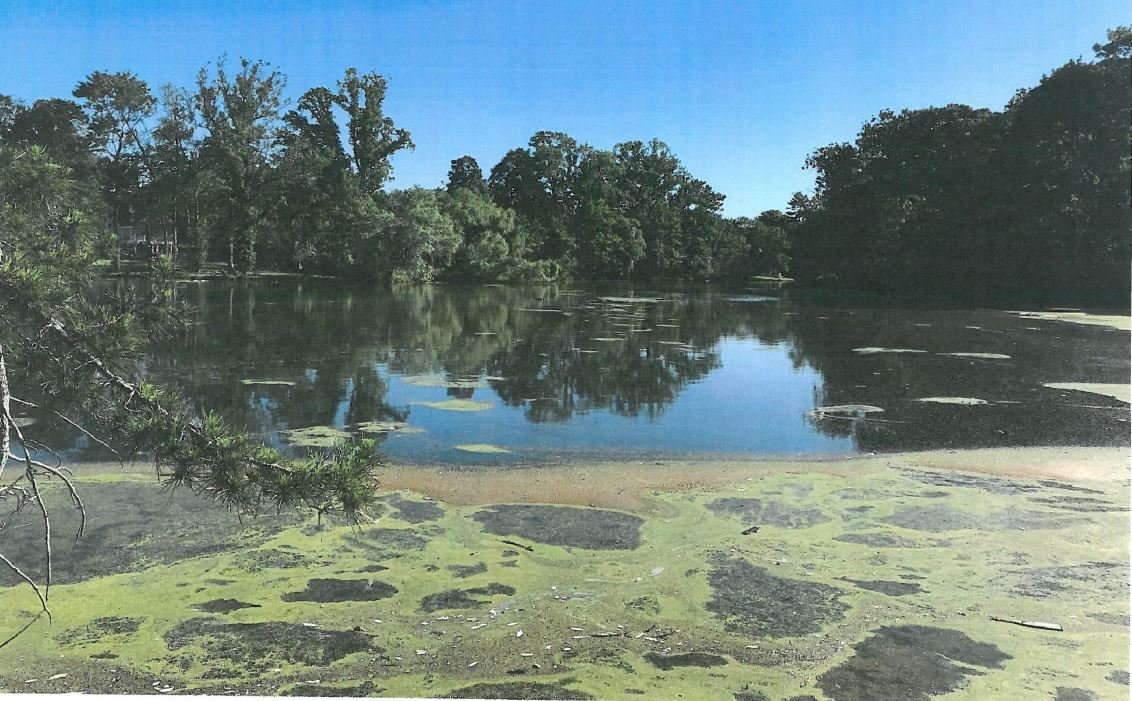 The treatments approved by the Department of Environmental Conservation have already yielded some results in Willow Pond, eliminating duckweed and algae after treatment began in August.
Courtesy Len Oppenheimer
By Tyler Marko

Willow Pond is trapped in a vicious cycle. The 4.5-acre pond on Everit Avenue in Hewlett Harbor has been plagued for years by algae blooms and an infestation of duckweed, a flowering aquatic plant that float on the surface. The pond was once a point of community pride, and it’s been reduced to an eyesore in recent years, but better days might be ahead.

In a management plan released by Dru Associates, Inc., an environmental consultant firm, this past June, it is explained how the ecosystem ended up in such a state. “[The pond] sits at the lowest point in a fresh watershed which is highly suburbanized, and most of the drainage area is either landscaped lawns and gardens or impervious surfaces,” it states in the plan. “Therefore, all rain and snowmelt reaches Willow Pond without experiencing any abatement of nutrient and silt accumulation. Since this has been occurring for decades, the pond is now in crisis.”

The algae and duckweed thrive on these nutrients, as well as warm water. As winter approaches the plants die and settle at the bottom as a sort of muck making the pond more shallow every year, and less volume means that the water warms up quicker as the muck accumulates.

Len Oppenheimer Hewlett Harbor’s deputy mayor and the village’s Pond Commissioner, said returning the pond to it’s original depth is the long term goal. “The solution to the pollution is dilution,” he said. “The pond has gotten to the point where there isn’t enough oxygen for fish. That kills off the turtles and keeps the birds from feeding so the area would keep degrading until it’s a swamp.”

Dredging the bottom of the lake to remove the muck would be a “million dollar project,” according to Oppenheimer, however, the village would first have to get approval from the New York Department of Environmental Conservation. Similarly to how consent was gotten to use enzymes colloquially known as “muck pellets,” that eat away at the organic material on the pond’s floor, the village must first show the DEC that the village has tried other methods without success.

On July 3, the DEC issued a permit to the village, which allowed for the use of bacteria and enzymes that can be used as needed, and a herbicide, Clipper, no more than three times in the 2018 calendar year. “Further chemical treatment of the pond is not anticipated prior to the implementation of non-chemical alternatives,” Aphrodite Montalvo, a DEC spokeswoman said. “Ideally, the control of incoming nutrient sources, installation of surface flow mechanisms (fountains), manual removal of overgrowth, and appropriate aquatic and emergent plants to take in excess nitrogen could be looked at for longer term solutions.”

In the past, Hewlett Harbor has tried manually removing the duckweed, reducing the nutrient levels with different enzymes and applying cutrine an algaecide, to little avail. In 2014, the village asked to use a pesticide, diquat, to kill the duckweed, but the request was denied as the DEC ruled there wasn’t enough coverage to directly apply the chemical.

Oppenheimer said, the village spends upwards of $30,000 on yearly controls. He said that it’s their hope that long-term measures would stop this annual drain on village funds. “Our goal is to make sure that Willow Pond is safe and healthy for future generations to enjoy,” he said.

Montalvo explained that muck pellets attack the sludge at the bottom of the pond, not the algae directly, but by removing the organic material from the bottom it deepens the pond and removes some of the nutrients the algae feeds on. She added that if the village still would like to dredge the pond they would, “Be required to submit a permit application to DEC to ensure the procedure is done properly and responsibly in accordance with DEC regulations,” she said. “Soil borings need to be conducted to test for contaminants in soils, appropriate dredging depths, and where the dredging spoil can be appropriately deposited.”

In an email to the Willow Pond Committee, Oppenheimer said he is looking to step down from his role as commissioner, but is still looking to stay involved. He hopes that they can build an infrastructure to maintain the local landmark for the foreseeable future. “We all know that a little focus makes things happen, especially in a small village,” he wrote.
Report an inappropriate comment