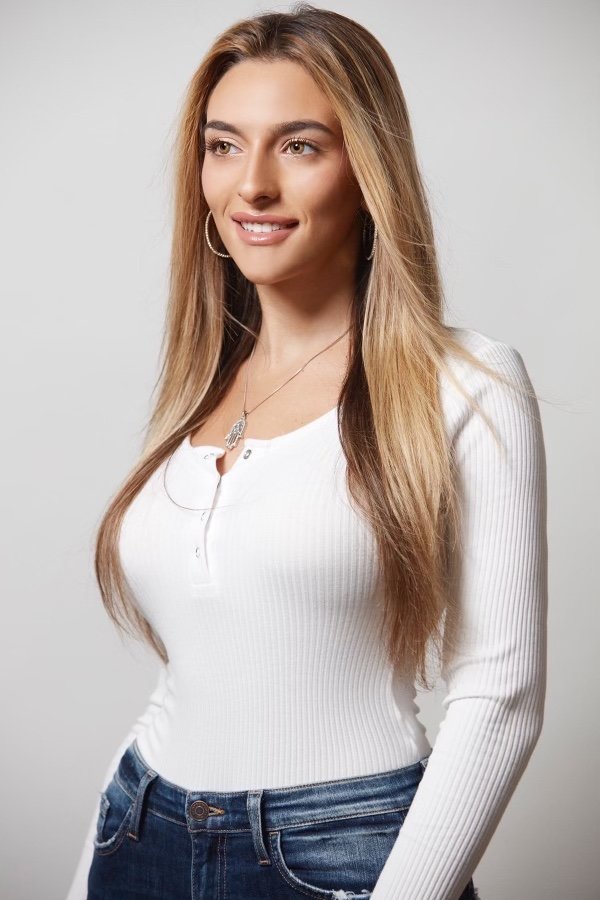 Instead of catching up on her favorite television shows or movies on Netflix during the coronavirus pandemic, Hewlett Harbor resident Emily Austin began making strides toward a future in sports journalism.

Austin, 19, is a sophomore journalism student at Hofstra University. She also models on the side and has been featured in magazines and a Times Square billboard for Kla$$ Kulture, a clothing line created by fellow Five Towns resident Michelle Borokhovich. With the extra time on her hands, she decided to jump-start her sports journalism career by reaching out to professional athletes to interview them for her vlog “Daily Vibes with Emily Austin.”

“I decided that I wanted to focus on sports journalism since I was a former athlete,” Austin said. “I reached out to people since I figured that everyone was home and had time on their hands. Luckily I heard back from them and one thing led to another.”

Austin said that the transition to virtual learning in college throughout the pandemic has allowed more flexibility with conducting interviews. “School is different now as it’s less hands-on, but the pros are that I can focus on my career while I’m still in college,” she said. “I’ve tried to make the best of this extra time.”

Most of the athletes Austin has interviewed include current and former NBA players such as: Carlos Boozer, Enes Kanter, Ben McLemore and Mitchell Robinson. “I like talking about off the court things with the athletes,” she said. “Carlos Boozer was very nice and sharing. He told a story about how Prince rented his house in Los Angeles and he painted the whole house purple.”

Jade Mimoun is Austin’s manager, as the two have known each other for roughly seven years. Mimoun noted that Austin’s charisma gives her great potential for the future.  “Being able to interview professional athletes at her age is not an easy thing but it comes easy to Emily because she’s an easy person to talk to and is a professional,” Mimoun said. “She’s getting into contact with the top people and they always respond to her. I think it’s her charisma and ambition that attracts people.”

Mimoun noted that Austin has always been ambitious for as long as they have known each other. “When I first met her, the first thing I thought was that she was older than me with how she acted,” Mimoun added. “She’s very funny and wise beyond her years. She is just an incredible person.” Mimoun is two years older than Austin.

NBA agent David Mariotti, whose clients are players Terry Rozier of the Charlotte Hornets and Derrick Jones Jr. of the Portland Trail Blazers, took a quick liking to Austin he said because of her outgoing personality in the year he has known her.

“The amount of ground she’s covered at such a young age is impressive,” Mariotti said. “I used to be in sports journalism and I know how hard it is to break into the field. She has a bright future and will make an impact in any route she decide to take.”

Looking towards the future, Austin is planning on interviewing more athletes and hopes to continue doing so in the coming years. “I want people to be able to turn on ESPN or any sports channel and watch me reporting for a sports team, preferably in the NBA,” she said.