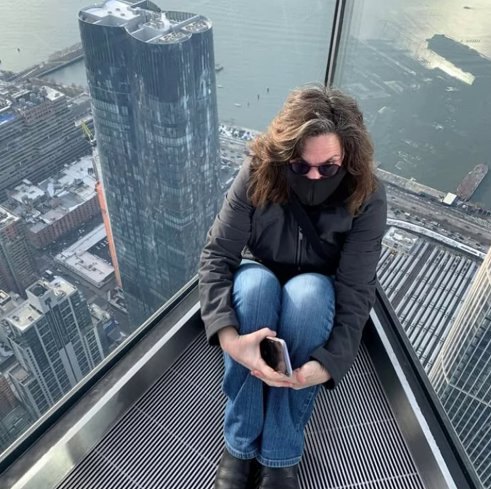 Hewlett-Woodmere School district employee Melanie Rosen said she tested positive for Covid-19 on March 22 after receiving her second dose of the Moderna vaccine on Feb. 20.
Facebook
By Matthew Ferremi

In the United States, roughly 4.9 percent of people have tested positive for Covid-19 after receiving two doses of the Moderna vaccine. Gibson resident and Hewlett-Woodmere School District employee Melanie Rosen was one of those people that tested positive after being inoculated.

Rosen said she received her two shots on Jan. 17 and Feb. 20. She tested positive for the virus on March 22 after she went to the wake of a family friend in Hampton Bays on March 15. “The night after, I had a stuffy nose but I thought it was allergy related,” Rosen said. “All of a sudden my legs then started to hurt. I thought that was because I have been sitting at my job a lot.” Rosen has worked as the secretary to the district’s athletic director for the past four years.

After the wake, Rosen said her friend she came into contact with said she tested positive for Covid-19. Rosen then went to get tested on March 19. “I called up my friend the Friday after to check up and she said she had Covid,” Rosen added. “As soon as I heard that I went to get tested. On Monday the 22nd, the positive test came back and I was stunned.”

Since her positive test, Rosen said her case has been mild. “The first week after my positive test, the legs were hurting but that has since gone away,” she said. “The stuffy nose has remained but that is getting better.”

In the past year, Rosen says despite the pandemic, she has been active with being outdoors and working in-person since June 2020, which is why, her positive test was even more shocking to her.

“If anyone should’ve gotten it in the beginning of the pandemic, it should’ve been me,” she said. “I wasn’t someone who was paranoid and stayed home all the time. I’m an outdoor person and I’ve been exploring places I’m not familiar with in New York City for the past year. But I did all these activities with a mask on.”

Rosen said she hopes her positive test can be a reminder to others that the virus is still a threat. “We have Passover and Easter celebrations happening and I hope people are being careful,” she said. “It seems like every week that the district sends out letters about positive tests. This is not over.”