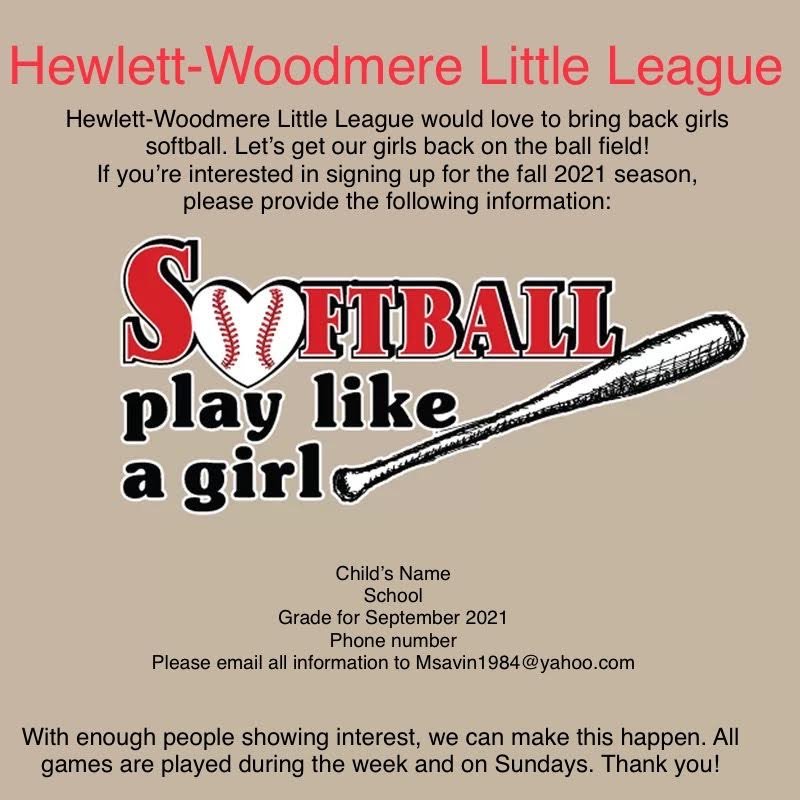 The Hewlett-Woodmere Little League aims to revive softball play for girls. Sign up for a fall league is under way.
H-W Little League
By Olivia Ramseur

It’s been over a decade since the last time the Hewlett-Woodmere Little League played girls softball and this year some parents are hoping to restart the league for the fall season.

Michael Savin, a Little League baseball coach, proposed reinstituting softball to the league’s board and took on the task of meeting the requirements. Right now, only a few girls play on the baseball teams.

“My daughter, she plays baseball and she wants to play where there’s more girls,” Savin said. “So, I brought it up to the board members about getting the girls softball going again and they said that they’ve tried and they just aren’t getting enough turnout, so I said to let me try.”

In order to establish a league, there needs to be around 50 girls to form four teams in an age group. The first age group is first- and second-graders, the next level is third-, fourth-, and fifth-graders, and the upper level is sixth-, seventh-, and eighth-graders. With registration for the fall season held in June, there is about a month left to reach the number of kids needed to form a league.

Mike Byer, the board’s vice-president who had two daughters play in the H-W softball league before it was shut down, is hopeful that they will have enough interested girls to start the league in the fall.

“If he can get enough applicants for an age division, we could have at least four teams, which would be great,” Byer said. “[Savin’s] on the verge of doing it. He’s at around 30-something girls so we still need a few more, but it’s a possibility. Everybody’s in favor of it and as long as we can get enough girls who want to participate, we would love to start the softball league.”

Board President Rachel Weisman hopes that even if there is not enough interest to start the league in the fall, that they’ll be able to start in spring 2022.

“My hope is that even if we’re not able to do it for the fall, because the fall is always a lower interest even in baseball, I’m hoping that for the spring we’ll be able since we have now until the spring to get the word out…” said Weisman. “[We want] girls to get off the couch and off of their screens, get out into the nice weather and socialize...It’s just a fun activity that’s social and can be competitive, but doesn’t have to be to the extent of other competitive sports.”

Byer believes that, beyond just keeping them busy outside of school, getting more girls involved in sports earlier can help them become better athletes in and after high school.

“Just from my own observations from [umpiring] girls varsity high school softball is that there are some tremendous athletes ...” said Byer. “I think it would be a great opportunity for girls to start early and who knows if there are some stars out there who can get some college scholarships and who knows what thereafter.”

To sign up for the fall girls softball league, contact Mike Savin at Msavin1984@yahoo.com. For more information about the existing league, go to https://hwlllittleleague.com.