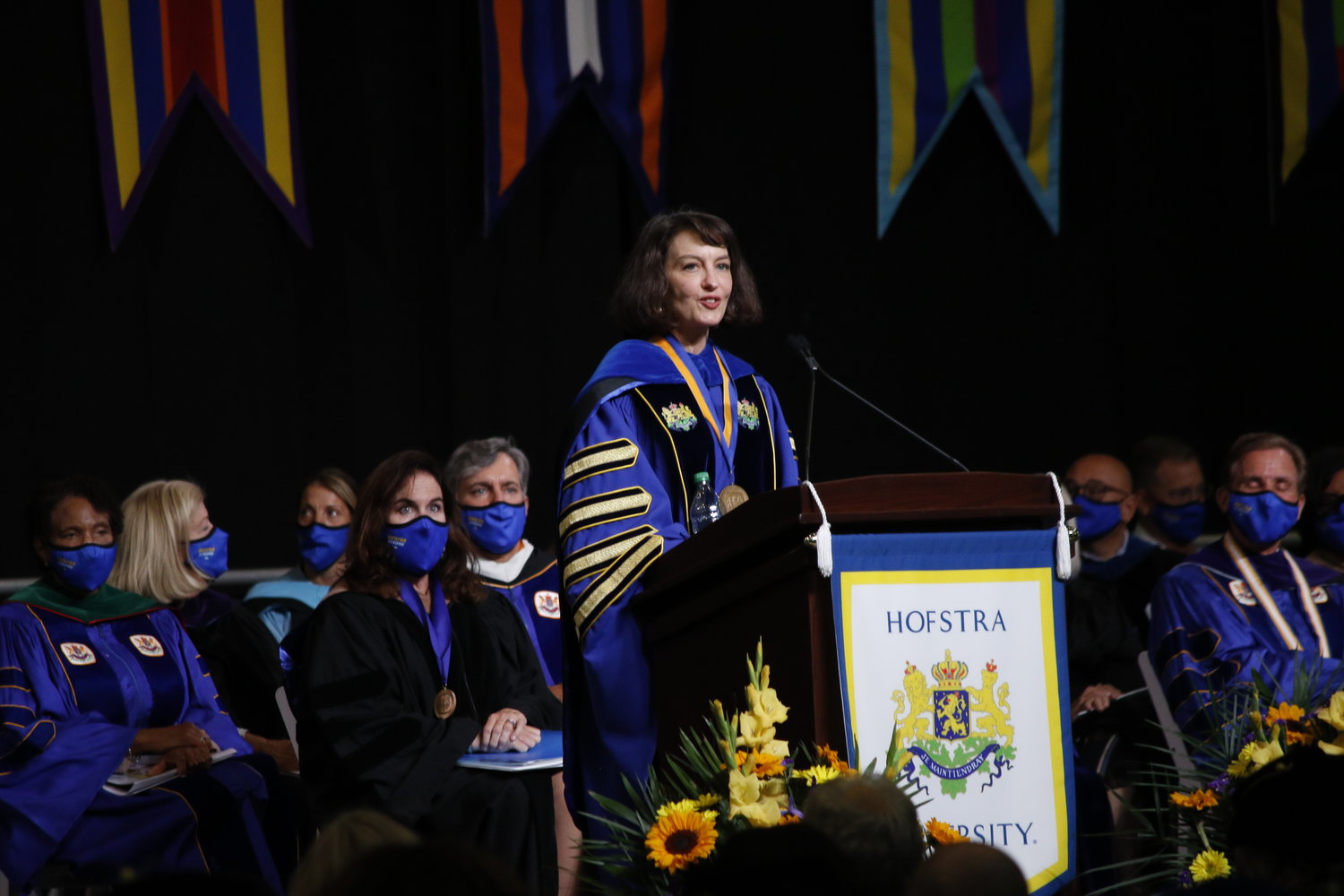 Dr. Susan Poser was inaugurated as the ninth and first female president of Hofstra University on Oct. 1.
Christina Daly/Herald 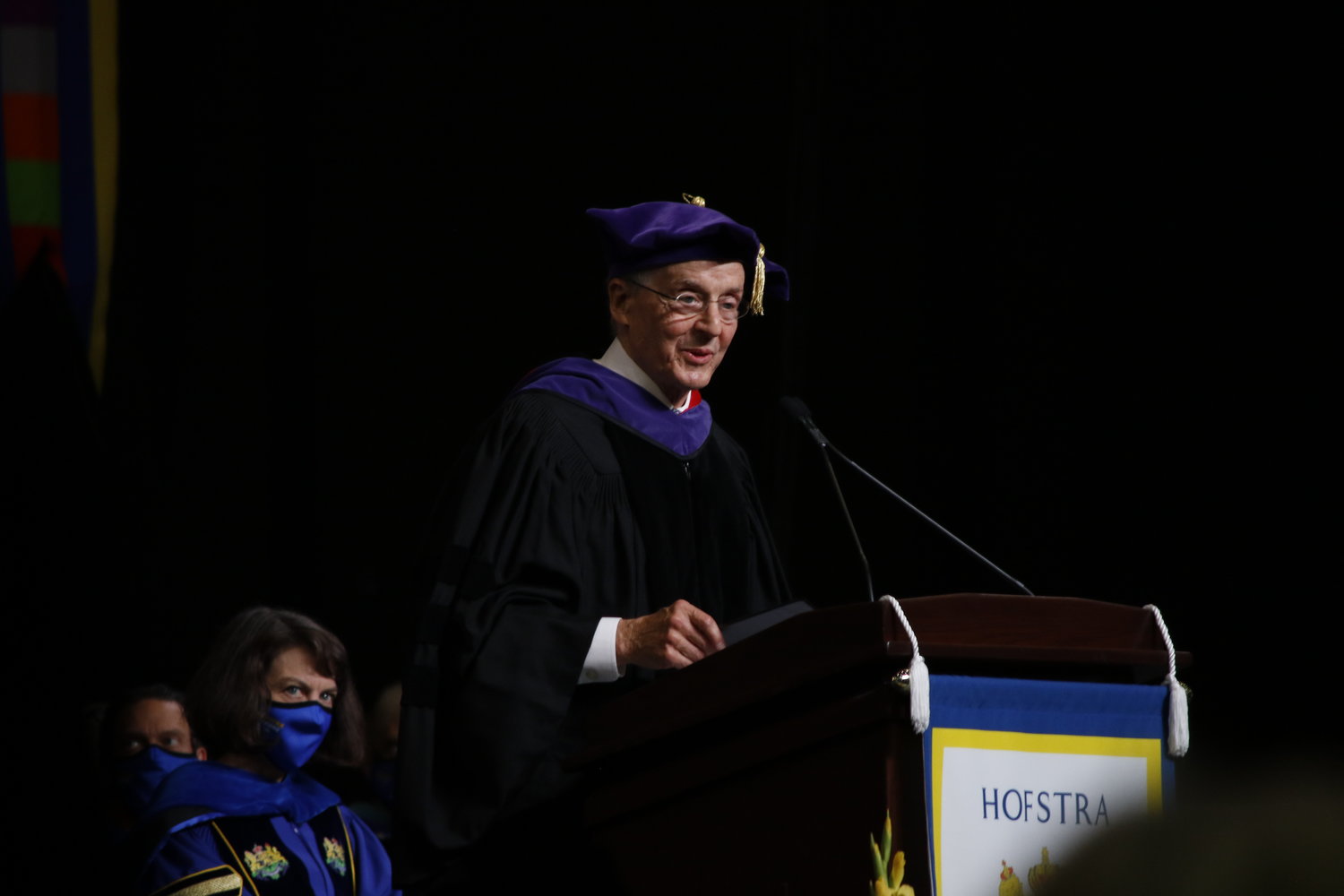 Close colleagues of Poser’s spoke at the inauguration, including Harvey Perlman, former chancellor and law professor at the University of Nebraska.
Christina Daly/Herald
Previous Next
By Andrew Garcia

This is Poser’s first foray into guiding a university as president. She was previously the provost and vice chancellor for academic affairs at the University of Illinois Chicago, a Carnegie Research One university with 16 colleges, including seven health science colleges and more than 35,000 students, from 2016 to 2021. Poser joins a tighter-knit community at Hofstra, with roughly 10,000 students.

Poser succeeds Stuart Rabinowitz, who retired this year after serving as president for 20 years. Under his leadership, the university grew to include schools of medicine, nursing and physician studies, engineering and government, putting Hofstra on the map as an internationally competitive institution.

Celebrations leading up to the inauguration were held throughout the week in the form of symposia that looked toward the future of education at Hofstra. From “Building and Bridging Our Future Together” to “Innovative Experiential Learning Opportunities in Engineering and Computer Science,” each featured experts in their respective fields lending their advice to fellow professionals and students alike. A keynote address by New York Times columnist and best-selling author Charles Blow kicked off the week.

Throughout her two months at her post so far, Poser has also made her presence known on campus. She has often been seen touring around, stopping to chat with groups of students.

After the singing of the Hofstra alma mater “Blue and Gold” by the Inauguration Vocal Ensemble, as well as welcomes from several of the university’s student and faculty leaders, Poser was congratulated by three close friends and colleagues.

“To me and many others, [Poser] has always been a light from which many have been lit — a shining light that no one would dare, or could, dim,” said Daniel Dawes, director of the Satcher Health Leadership Institute at Morehouse School of Medicine and a professor of law, policy and management.

Dawes was a first-generation immigrant student at the University of Nebraska when Poser was there and took him under her wing. He was a young, anxious student who was 1,400 miles from home, but felt welcomed and accepted by Poser in the intimidating environment of law school.

“I, for one, am frankly jealous of you all, because you get to bask in the warm glow of her light,” Dawes said. “But I’m also immensely excited to watch Hofstra shine brighter than ever before.”

Barbara Wilson began a new position at the University of Illinois around the same time that Poser did, and their careers flourished together. In 2016, Wilson became the executive vice president for academic affairs, and the two worked hand in hand over five years on academic affairs. This year, Wilson was named president of the University of Iowa a short five months after Poser was hired as Hofstra’s president.

“During the time we were in these positions, we navigated some sticky state politics. We managed a financial crisis in the state of Illinois that underfunded higher education pretty significantly. We managed the onslaught of Covid-19 and the challenging racial and equity issues, particularly after the murder of George Floyd,” Wilson said. “It was not an easy time.

“Everyone that worked with Susan could see that she was destined to be a president,” she said.

“You have chosen wisely,” Perlman told the Hofstra community. “You have a new president who wants to do president, not just be one.”

In her address, Poser reflected on Hofstra’s history of independence and innovations in education and student relations.

“What a time we are living in, and what a time for higher education,” Poser said. “The pleasure of our renewed togetherness is real, but it cannot mask the challenges ahead.”

Before Covid-19, the challenges were already apparent, she said. There were fewer high school graduation expectancies, skepticism about the value of a college education and new world of students who have always lived in a digital environment. “How we address these changes over the coming years will determine Hofstra’s future and the future of our students,” Poser said.

“The idea of the pandemic as a portal or gateway serves as a useful metaphor to frame the challenges that we in higher education have before us,” Poser added. “If the pandemic is a portal, how will Hofstra walk through it? What will we take, and what will we leave behind? What world are we ready to fight for? What kind of university and community do we want to imagine on the other side?”

At UIC, Poser oversaw many accomplishments, including the acquisition of the John Marshall Law School as the first and only public law school in Chicago. She also focused on supporting faculty and enhancing diversity through several initiatives, including the creation of the Center for the Advancement of Teaching Excellence. She played a key role in creating two new cultural centers on campus, one focused on Arab American students and another on students with disabilities.

Before becoming provost at UIC, Poser was the dean of the College of Law at the University of Nebraska from 2010 to 2016, the associate to the chancellor from 2007 to 2010 and a law professor for more than 15 years. While dean, the College of Law moved up 35 points in the U.S. News & World Report rankings.

Poser grew up in New York City and majored in ancient Greek and political science at Swarthmore College, graduating with honors. She earned a law degree and doctorate from the University of California, Berkeley. Before starting her academic career, she clerked for Dolores Sloviter, chief judge of the U.S. Court of Appeals for the 3rd Circuit in Philadelphia and served as the Zicklin Fellow in Ethics at the Wharton School at the University of Pennsylvania.

Poser was also a recently appointed as a member of the Long Island Association Board of Directors, which will allow her to further engage with the Long Island community.

Poser is married to Dr. Stephen DiMagno, an organic medicinal chemist, and they have two adult daughters.

“I am so optimistic that if we come together, with pride and purpose,” Poser said, “we can do these things. Hofstra is beautifully positioned as a university — small enough to offer every student the opportunity to know their professors, participate in a wide variety of activities and influence their surroundings, and large enough to offer an array of academic and career opportunity for undergraduate, graduate and professional students. If we have the commitment, the discipline and the energy, we will prosper as never before.”