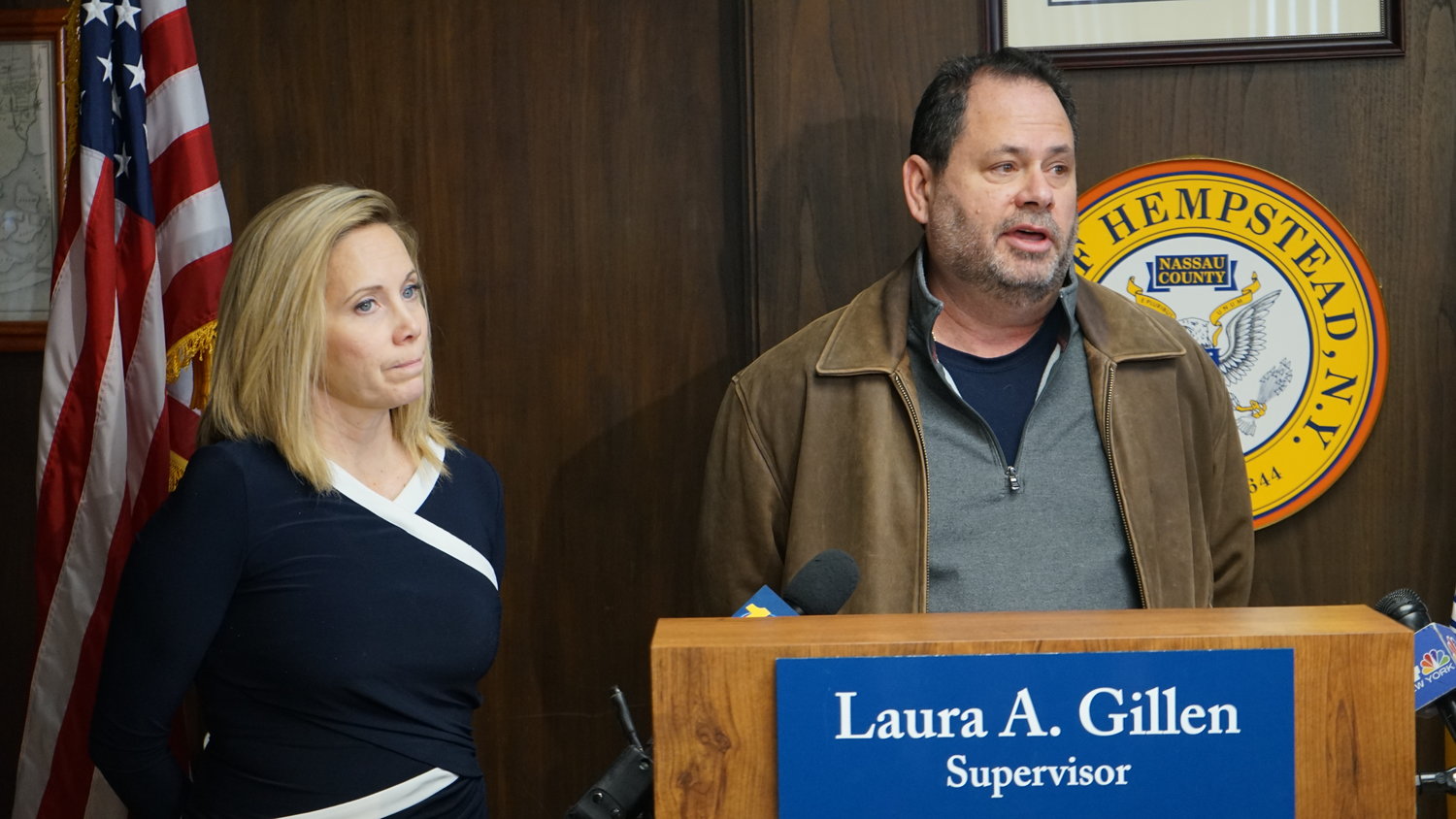 Town Supervisor Laura Gillen with Oceanside homeowner Michael Cascio in January. Cascio was told five years after Hurricane Sandy that he needed to elevate his house because of damage it sustained during the storm.
Peter Belfiore/Herald
To learn more about PDA's

Homeowners may request copies of Building Department documents related to their

properties, including preliminary damage assessments and substantial damage letters, by visiting the Building Department on the second floor of Town Hall. Homeowners may also call the supervisor’s office at (516) 874-8554.

Six years after Hurricane Sandy, the Town of Hempstead sent out letters to 13,000 homeowners on March 18 informing them that their homes may have sustained damage from the storm.
The letter from Hempstead Town Supervisor Laura Gillen, who was elected in 2017, marked the first time that homeowners were being formally notified about a damage assessment process that the town performed after Sandy.
Last year, a number of homeowners — including those who purchased homes after Sandy — expressed shock when they learned that they may need to elevate their homes because, immediately after Sandy, the town’s Building Department had conducted preliminary damage assessments of their homes but did not immediately notify them.
In her letter, Gillen noted the “lingering issues” and “systemic problems” related to the preliminary damage assessments that the town performed after Sandy and a subsequent substantial damage determination process.
“This letter was sent out to address a problem that was created over six years ago and continued under former administrations,” Gillen said in a statement to the Herald. “It’s shocking that there are still homeowners that have to deal with the aftermath of Superstorm Sandy. While my administration had nothing to do with these problems, we have been fully committed to fixing them as soon as they were brought to our attention.”


Some homeowners said they were told that their homes were so badly damaged, they would need elevate them in order to meet Federal Emergency Management Agency guidelines — and keep their flood insurance — only after they filed permits to make repairs or renovations unrelated to the storm years later. Conversely, residents who did not seek permits when they made post-Sandy repairs may not have been aware of the PDA performed on their homes in 2012.
“A new owner may be presented with a substantial damage letter when applying for permits to conduct new renovations/repairs,” the town said in an overview of the PDA process. “Or a seller may be faced with a home that cannot be sold because an application for a permit revealed a prior substantial damage letter that required outstanding mitigation requirements.”
The letters were sent to homeowners whose properties are located in the 100-year flood plain and/or were inspected by the town immediately after Sandy. A spokesman for Gillen, however, said that not every homeowner who received a letter might be adversely affected by the damage assessments. Still, the town said that to date, less than 4,500 applications for Sandy repair permits have been submitted, and Gillen said that many residents may be unaware of the damage assessments for their homes.
On Tuesday, the Hempstead Town Board voted to waive Building Department fees for homeowners looking to access records of their property damage.
To assist residents who are still in the recovery phase, Gillen said that the town also extended a waiver of building permit fees for Sandy-impacted owners to June 30, and eliminated the requirement of a variance prior to elevating a home to FEMA flood height standards, to make it easier for residents to comply.

‘A lot of people in the middle’
Unlike homeowners in Long Beach, some town residents were informed only last year that they would need to raise their homes because they had been substantially damaged, meaning that the cost of repairing them would exceed 50 percent of their market value before the storm. Programs like NY Rising that helped fund the bulk of elevation and repair costs after the storm had long closed out to new applicants.
In the PDA’s, properties categorized as “green” had no damage, while “yellow” indicated damaged and “red” severe damage. The PDA’s, the town said in an explanation to homeowners, “were then put on file in the town’s Building Department; however, many homeowners impacted by Sandy were left unaware of their existence.”
“In Long Beach, residents were worked with, they were educated, we set up NY Rising at the Ice Arena — there was a lot that went on to help residents rebuild,” said Jim LaCarrubba, Long Beach’s former public works commissioner, who is now Gillen’s chief of staff.
Of the 13,000 homes, LaCarrubba said that just over 11,000 were placed in the “yellow” category.
“You have a lot of people in the middle, and you don’t know what the level of damage was unless they came in for permits,” he said.
Among them is Oceanside resident Mike Cascio, whose home was placed in the yellow category with moderate damage.
As the Herald reported last year, Cascio was informed that his home had sustained more than 50 percent damage.
In 2017, when Cascio went to the town’s Building Department to obtain the necessary permits for a home extension, the town informed him that he needed to provide documentation detailing his Hurricane Sandy-related repairs.
Cascio said he put new sheetrock and flooring in the home, but once he notified town building officials of the repairs, he was told that he would need to elevate.
Cascio, who maintains that he was slightly over the 50 percent threshold, said he intends to appeal his damage assessment at a Zoning Board of Appeals hearing on May 1. He added that those who received large insurance settlements after the storm could be at risk, since the town relied largely on insurance claims to determine whether a home had been substantially damaged after homeowners filed repair permits years after the storm.
“I would say the vast majority of yellow … will be OK,” Cascio said. “If they clear me from that assessment, I’ll be good to go … and it will be a good precedent for people who are just around that 50 percent mark.
Michelle Insignia, executive director of Adopt-A-Home Inc., said that the zoning board determines whether a number of homeowners need to elevate after they appeal their damage assessments.
“Not all of the houses are going to be affected by this, but that’s exactly the point [of the letters],” she said. “There’s definitely going to be a majority of them that are going to be OK … yellow put them in iffy positions.”
She added that many are calling on officials to remove “as many yellows as possible if they’re not substantially damaged, so that our advocates and our government can attempt to get funding for the true reds,” and create a simple appeals process.
“If you’re trying to get people to elevate to comply, don’t you think you should tell them before they apply for a solar panel permit,” Insignia said.

Helping homeowners
Gillen said that when her administration became aware of the issues, “staff immediately began working on a plan to proactively notify property owners who would have had a Sandy-related PDA, but may never have sought a building permit.”
She said her office is also working with state and federal elected officials to find funding to assist homeowners with mitigation efforts.
She also requested that the Building Department enhance the substantial damage appeals process by allowing property owners to submit additional information, such as forensic appraisals or engineering reports “to provide a mechanism for homeowners to evidence a different percentage of property value to damage and reverse the determination.”
“We have been reaching out to our colleagues on the state and federal level for assistance and have been working with the town Building Department on developing a formal appeals process for homeowners who were found to have had been teetering on the threshold of substantial damage,” Gillen said. “Unfortunately, while there isn’t a ‘one-size-fits-all’ answer for every homeowner, we are here to work individually with residents, step by step, on finding some attainable relief.”

Peter Belfiore contributed to this story.
Report an inappropriate comment