Posted Monday, June 8, 2020 12:00 am
Hundreds of protesters flocked to the North Shore to protest police brutality on June 7, marching in solidarity with the Black Lives Matter movement and victims of police brutality in the wake of George Floyd’s death at the hands of Minneapolis police.
Jennifer Corr / Herald Gazette 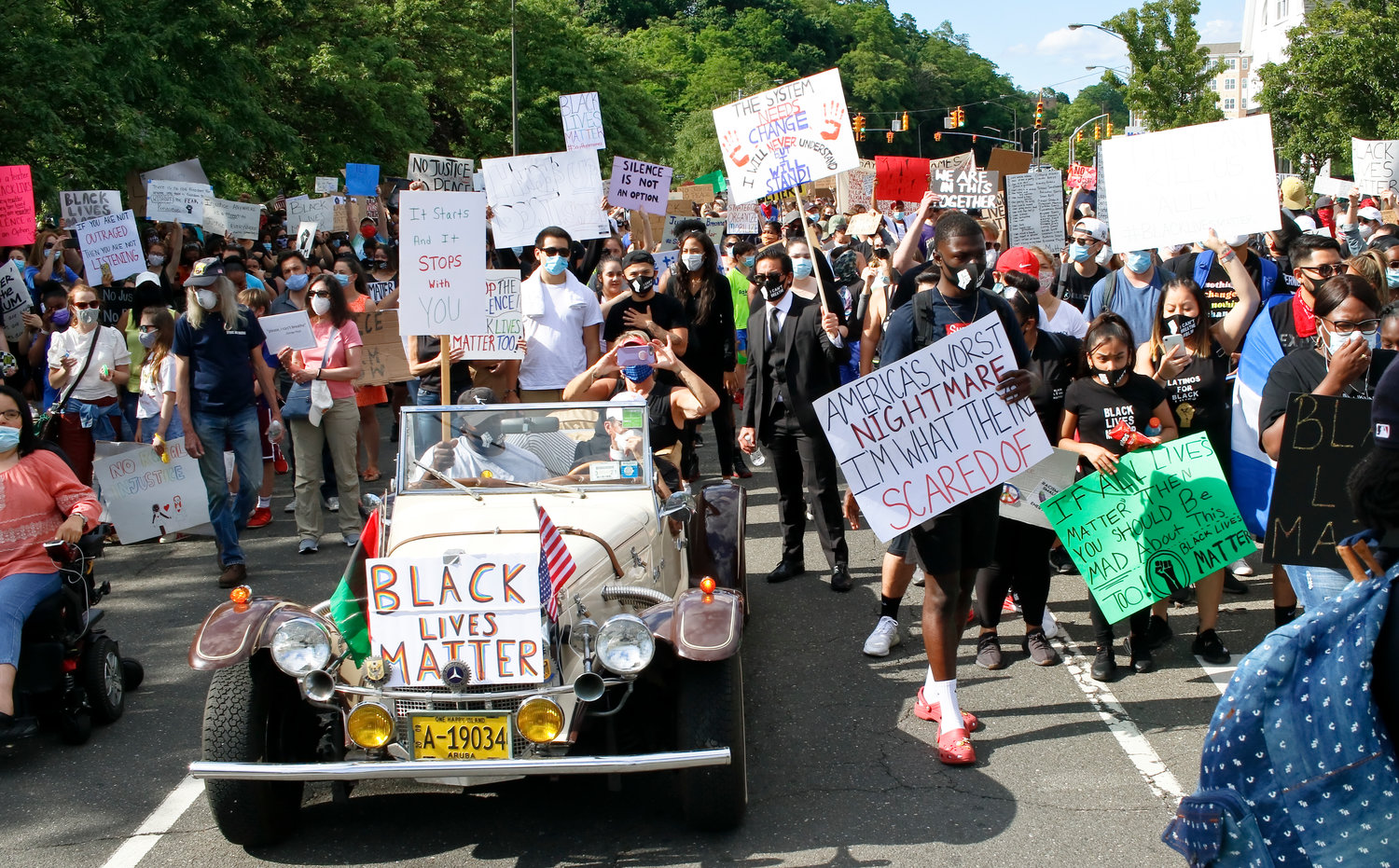 Hundreds gathered in Pratt Park for a Black Lives Matter rally and march which took them through the streets of Glen Cove and Sea Cliff.
Christina Daly/Herald Gazette 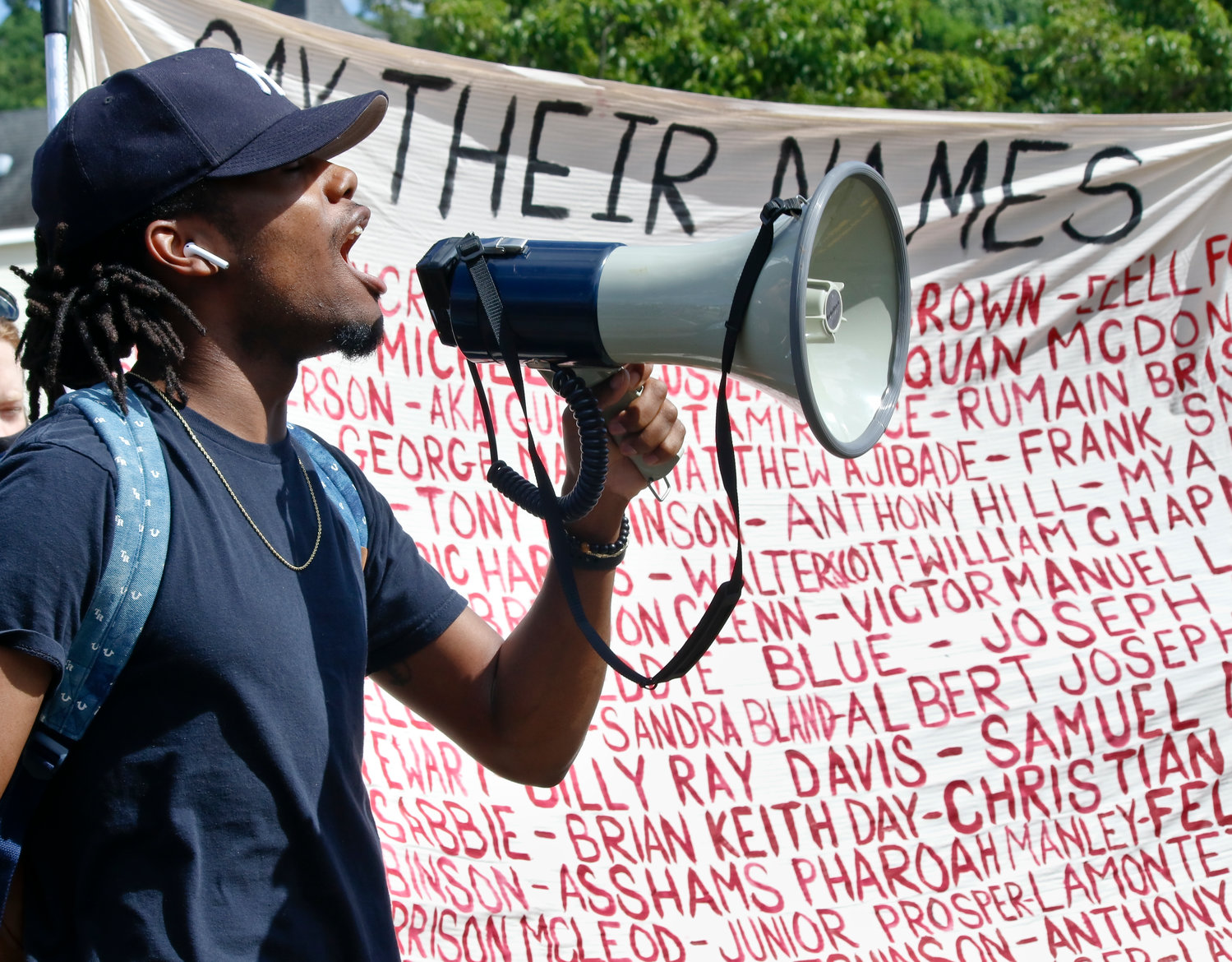 In front of a banner listing dozens of victims of police brutality, Antwan Brown, of Glen Cove, led protesters in chants of "Black lives matter," "Say his name George Floyed" and "No justice, no peace, no racist police."
Christina Daly/Herald Gazette 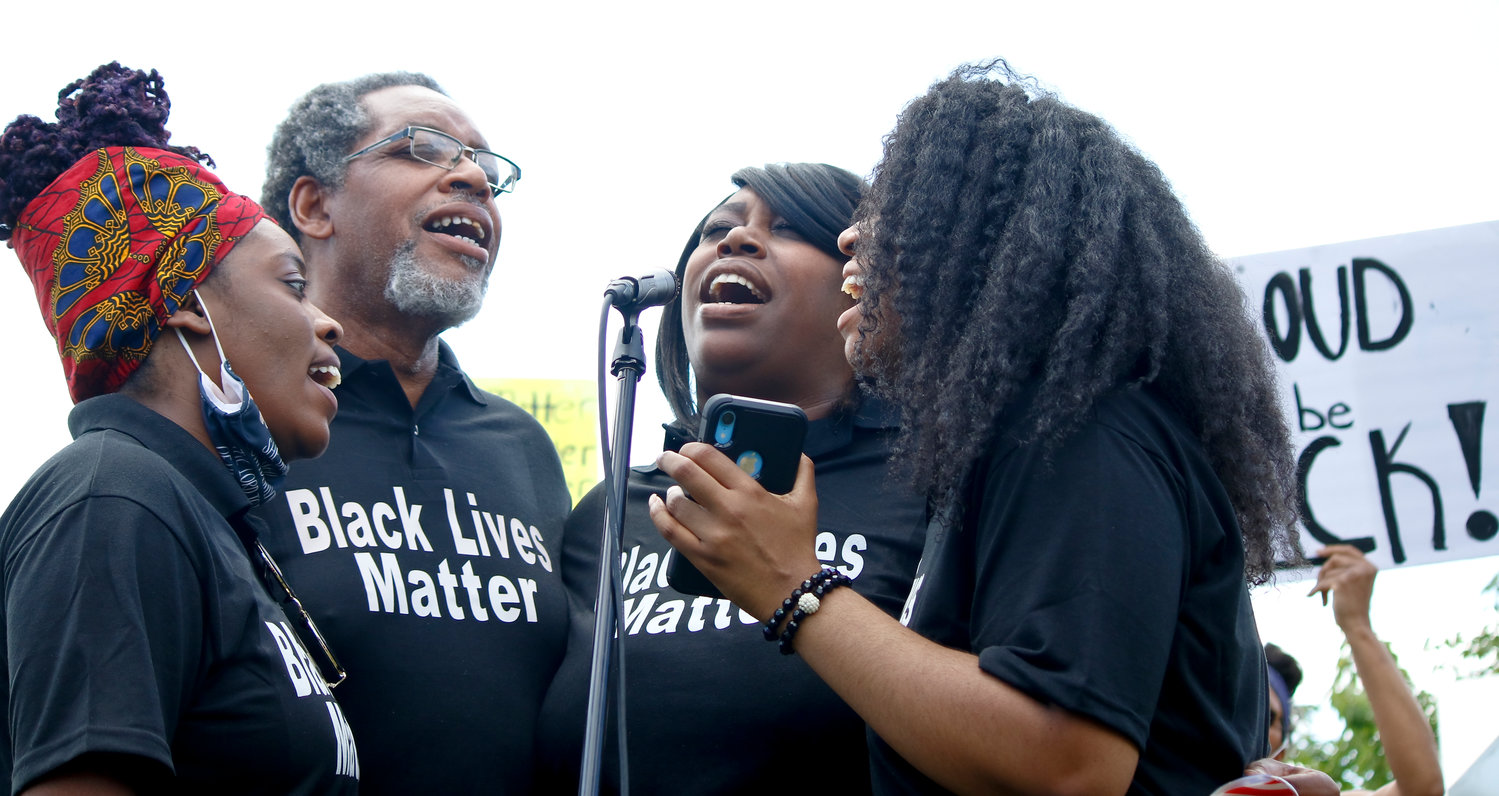 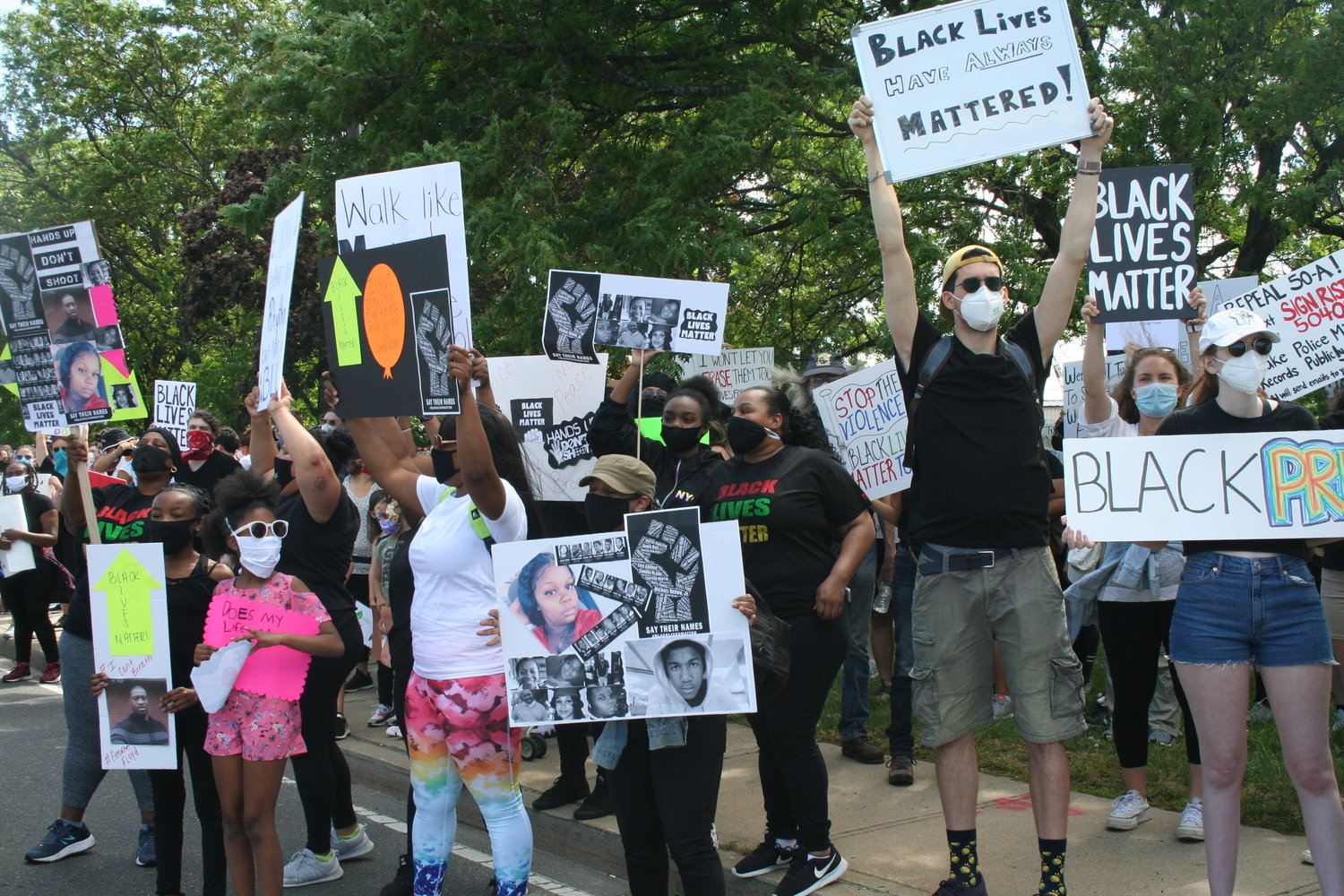 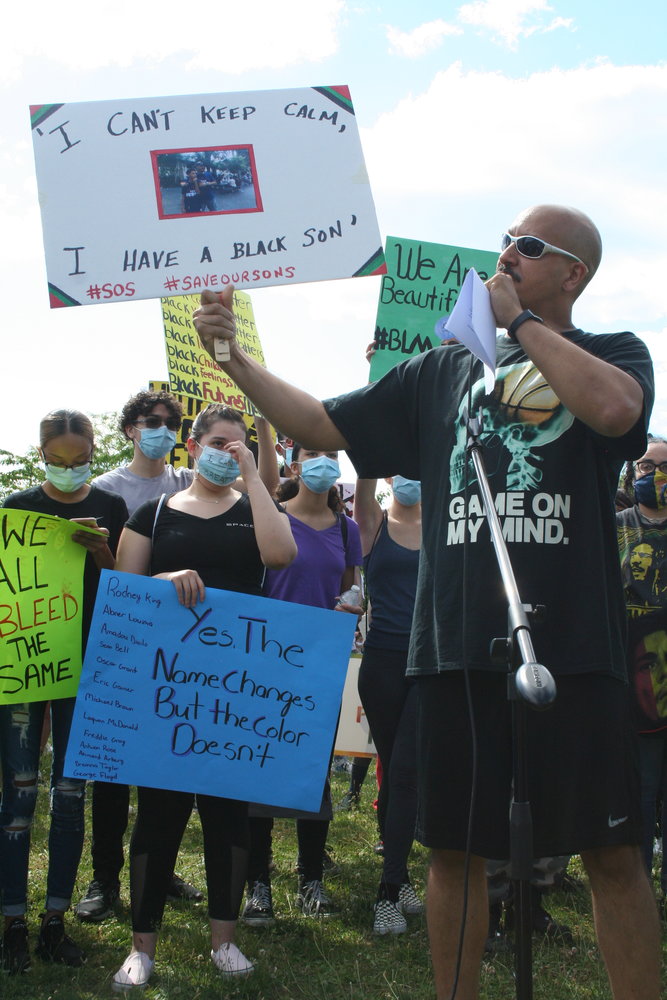 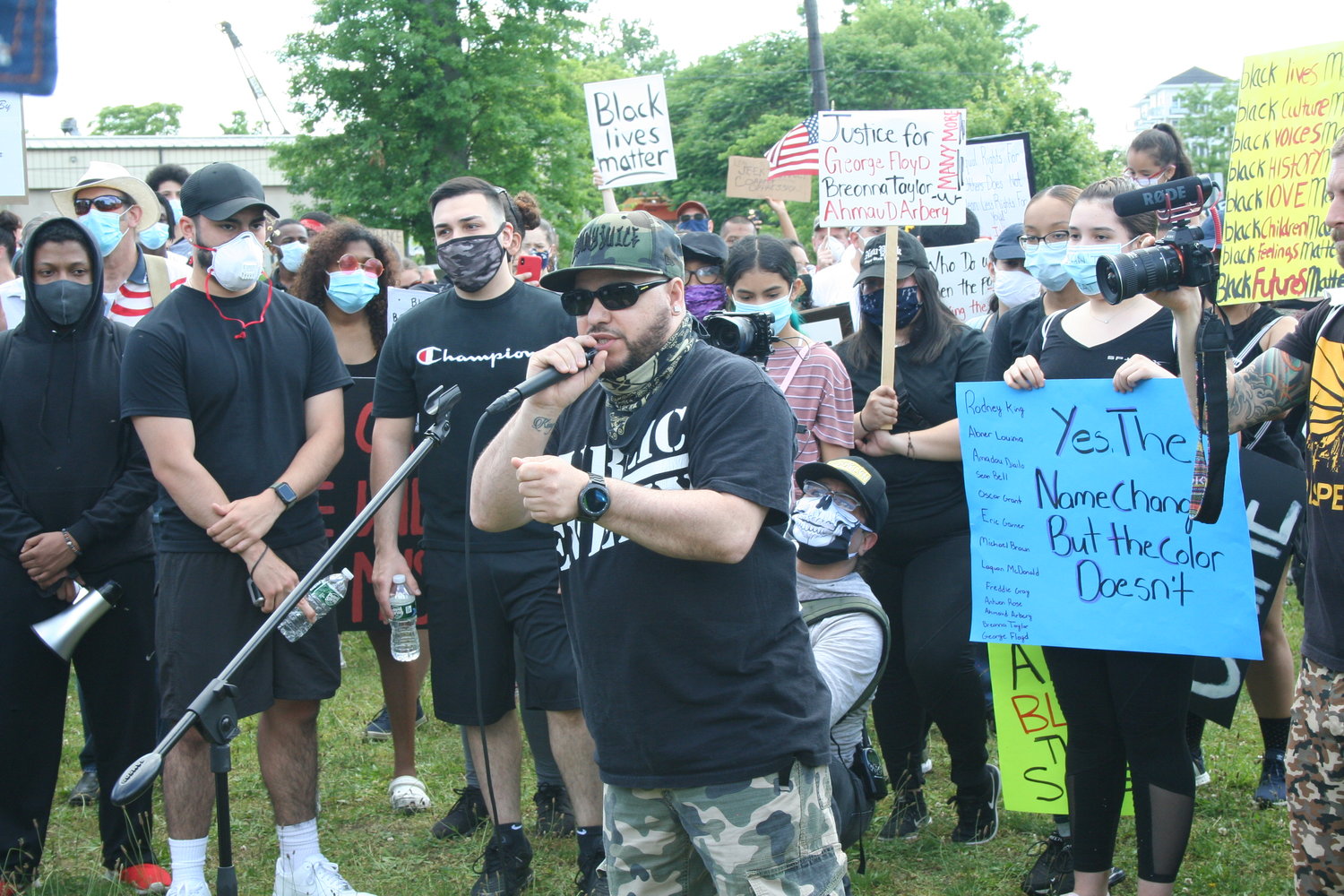 DJ Johnny Juice, who performed with legendary rap group Public Enemy, said sometimes you need to be loud in order to fight the powers that be.
Mike Conn/Herald Gazette 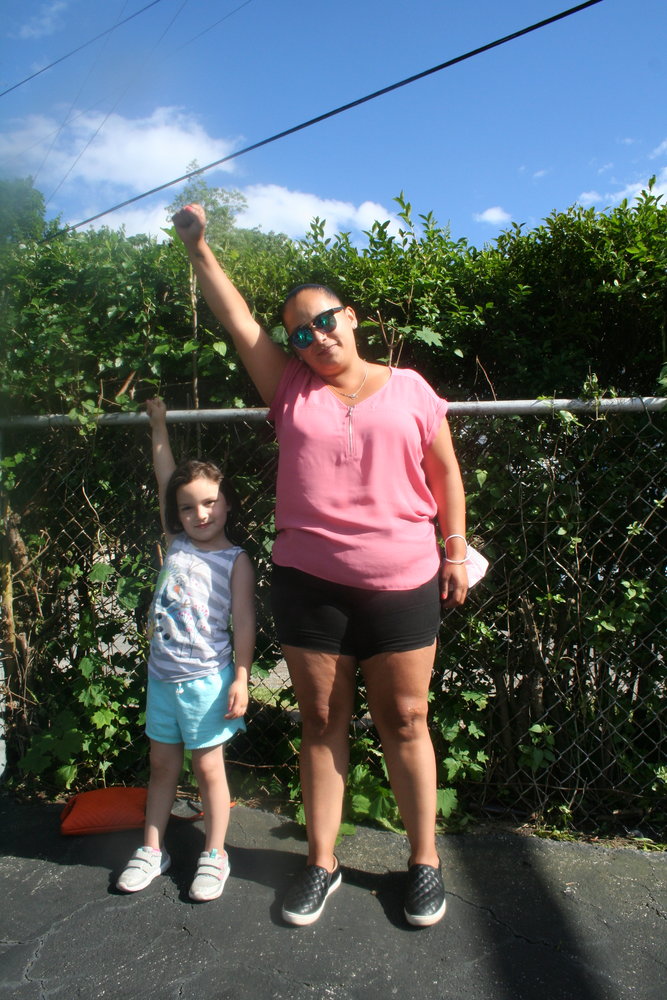 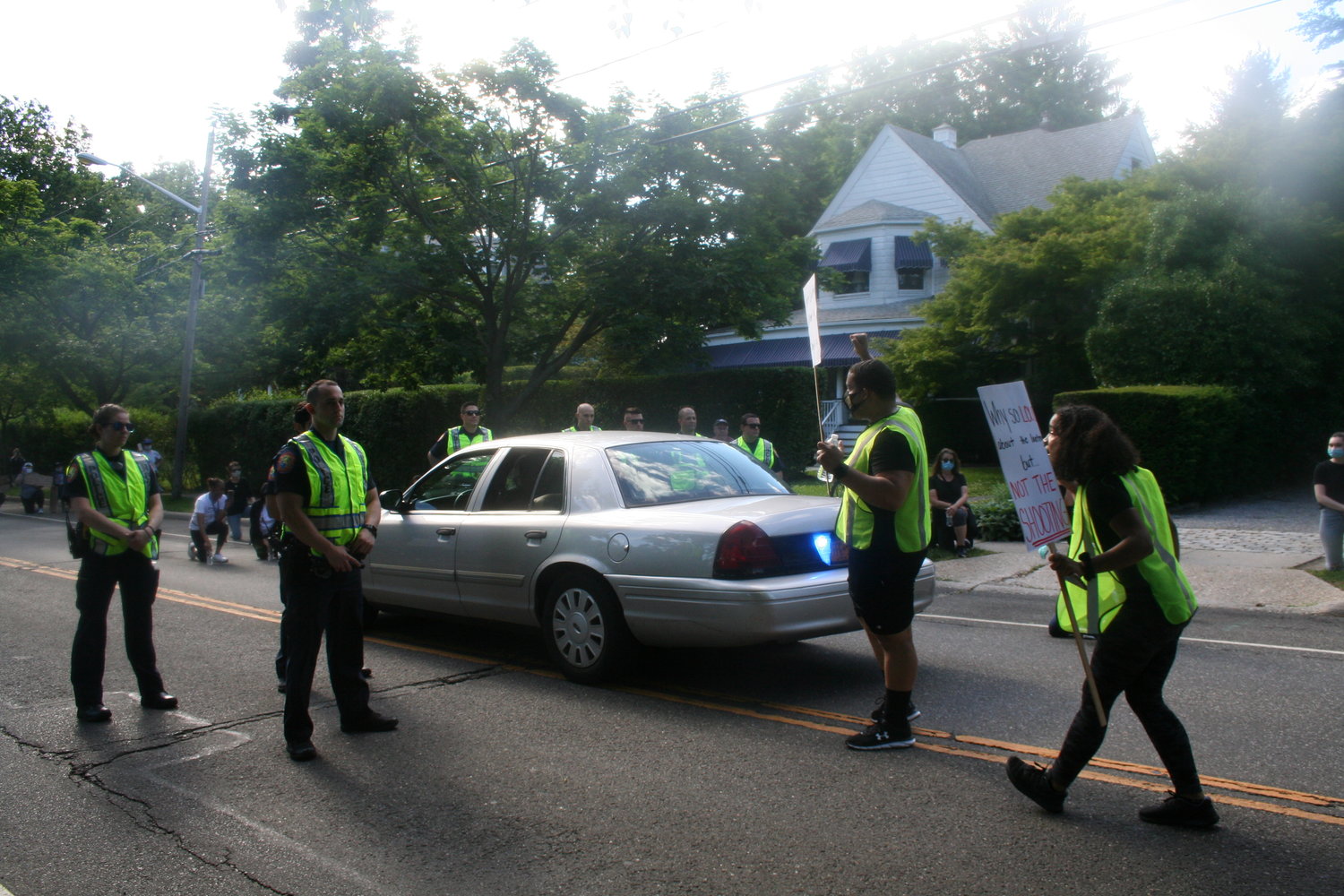 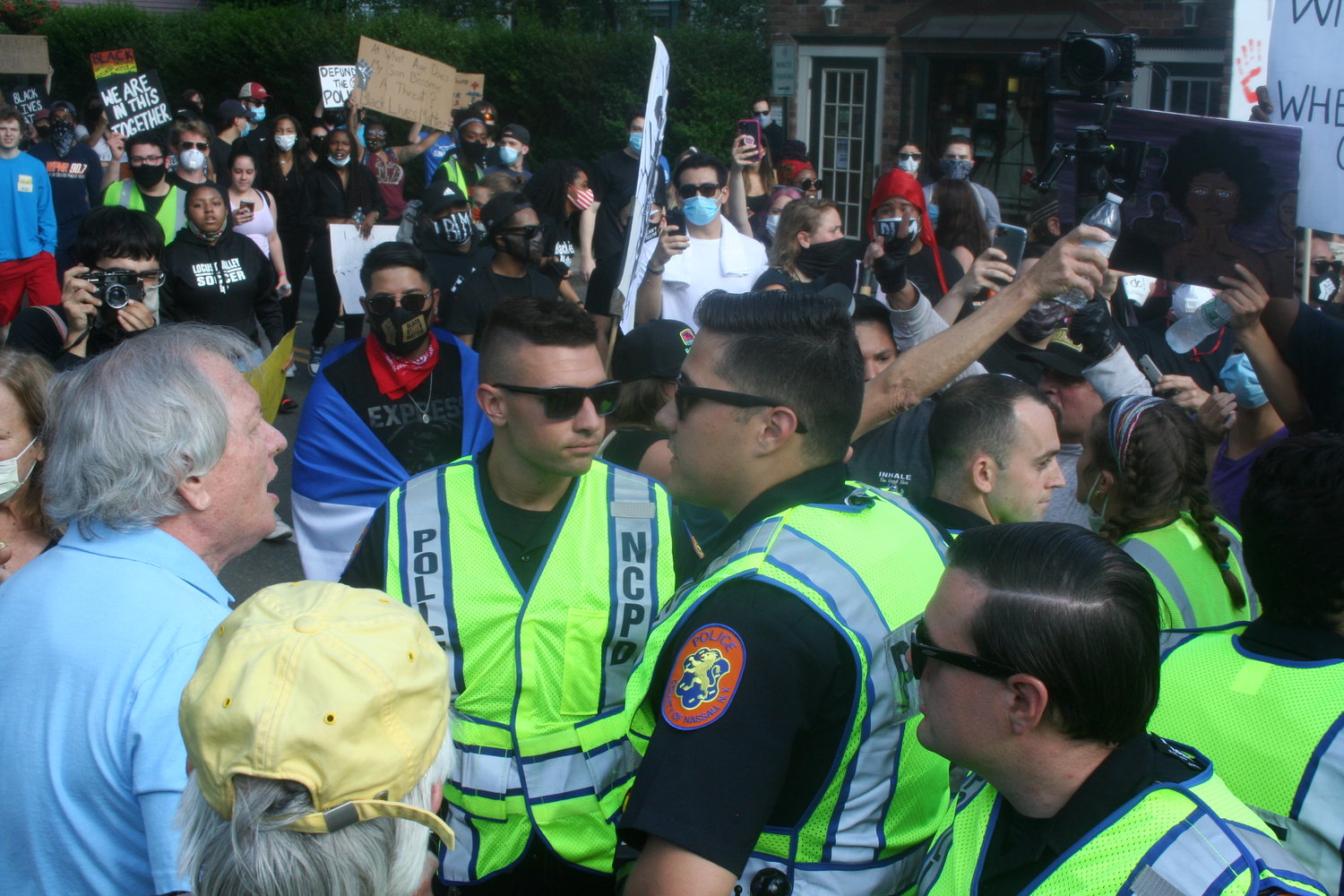 Police shielded a man who shouted obscenities in opposition of the movement from nonviolent protesters.
Mike Conn/Herald Gazette 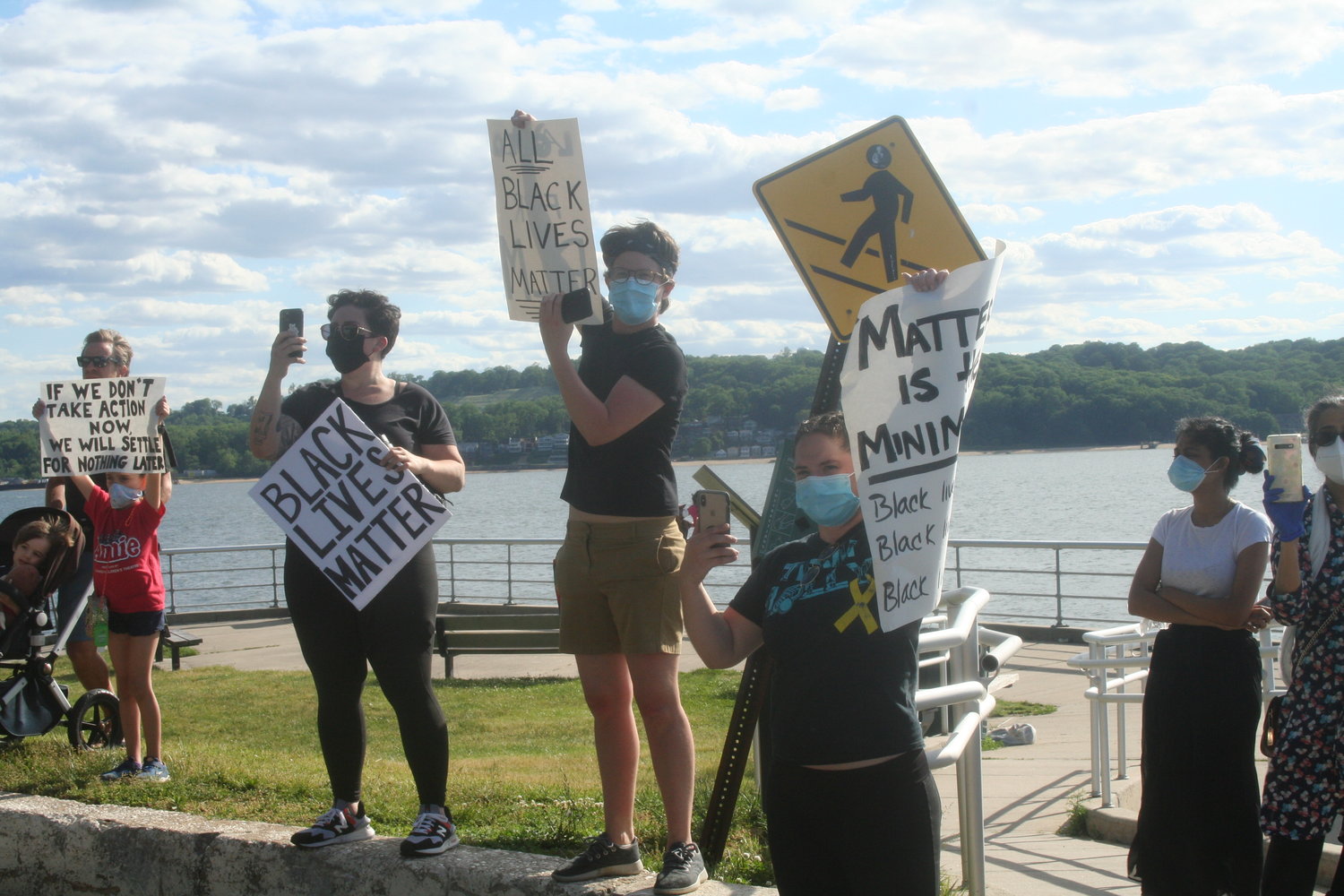 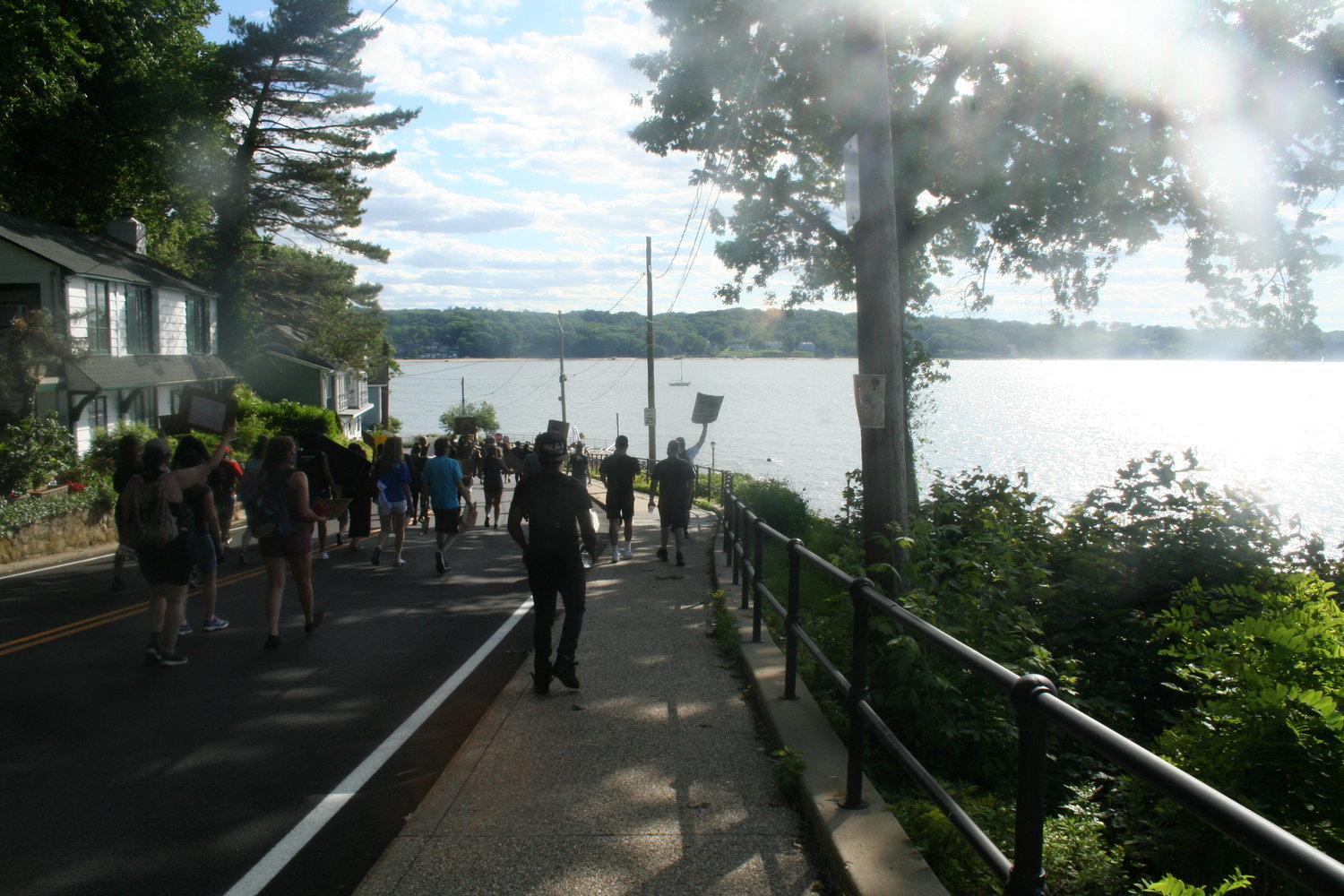 Protesters marched down Snake Hill to arrive at the Boulevard in Sea Cliff.
Mike Conn/Herald Gazette 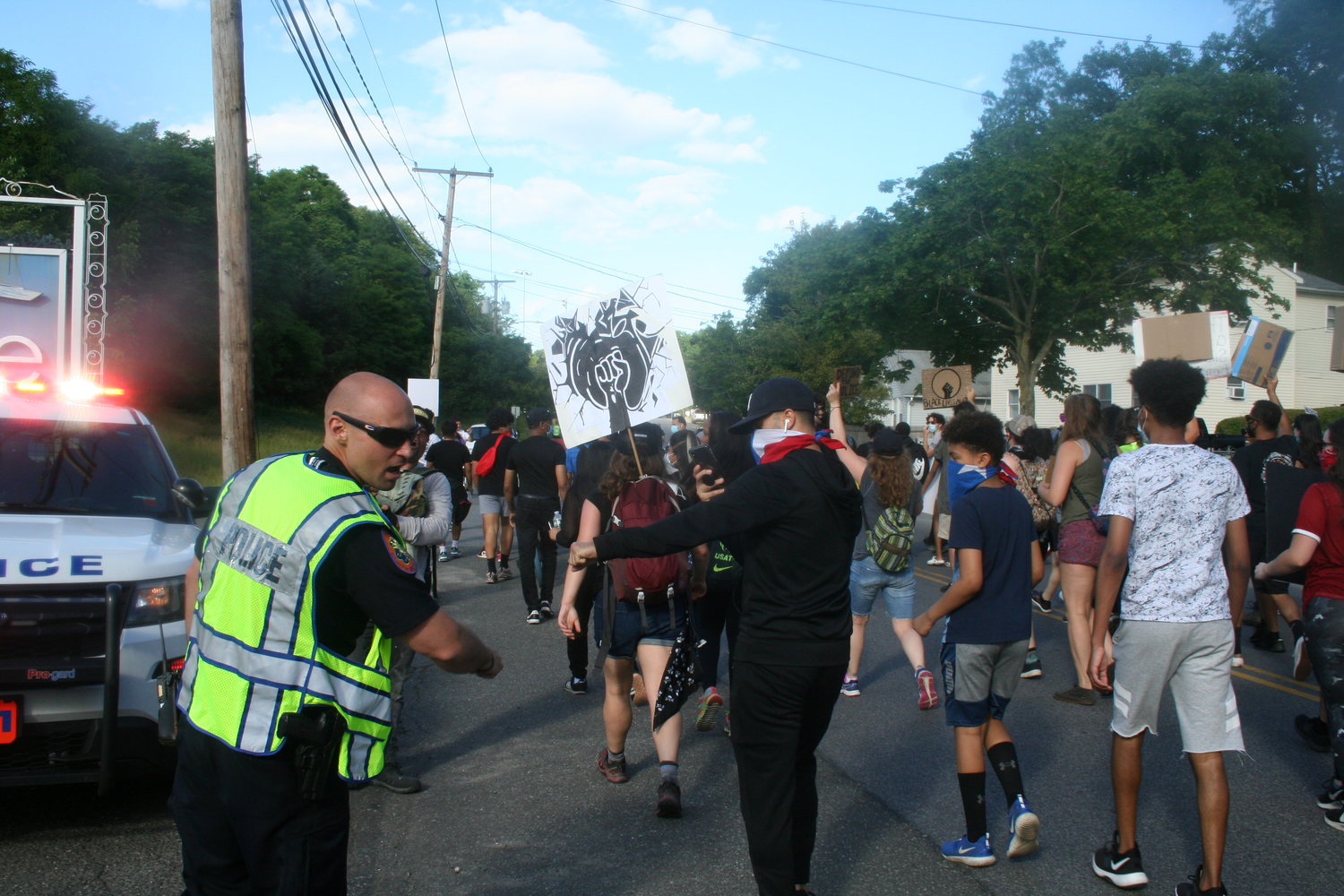 Nassau County Police officer Brett Maibach was the only officer along the route to physically interact with protesters, giving fist bumps to any who walked by.
Mike Conn/Herald Gazette Protesters took a knee on several occasions during the protest.
Mike Conn/Herald Gazette 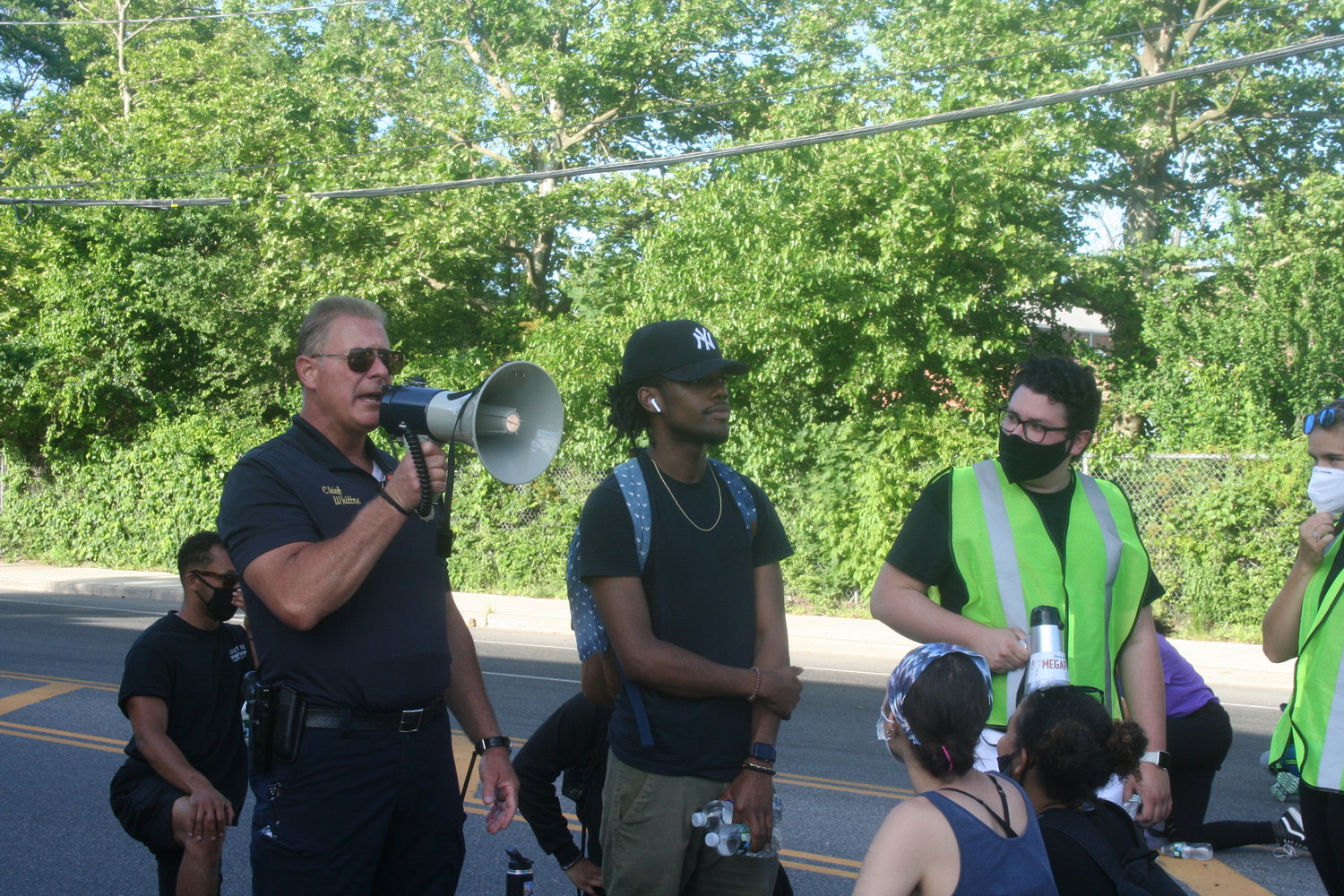 Glen Cove Police Chief William Whitton, left, told the crowd he supported them but would not kneel as Antwan Brown and protest organizer Stevens Martinez listened on.
Mike Conn/Herald Gazette 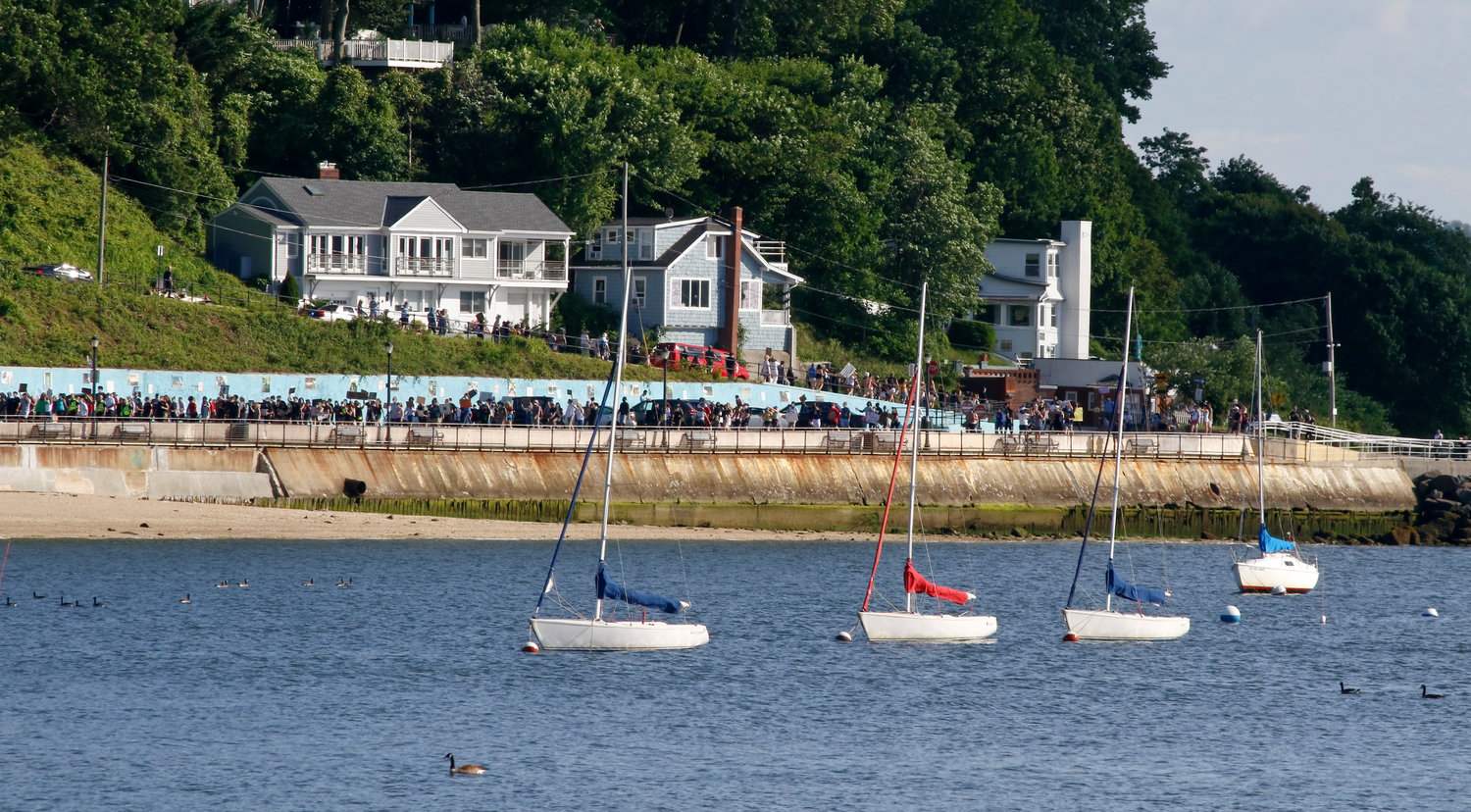 The Boulevard was packed with protesters walking parallel to Sea Cliff Beach.
Christina Daly/Herald Gazette
Previous Next
Residents react to the protest

"The rainbow was here. Every color of the rainbow — black, brown, Asian, Jewish, Christian, Catholic, Muslim… they were here. They were representative of this community.”- Jason Samel, protest organizer

"It’s really nice to see all of these people come out. I’ve lived here for as long as I can remember and I’ve always kind of felt out of place, so this is very nice to see everyone come together for this.”- Karina Farruia, Glen Cove

"I think, for years, queer people have suffered discrimination at the hands of police and now our black brothers and sisters are suffering. They need our help, so if I don’t return that favor, I feel like that’s a failure of me. We should be supporting the people that are supporting us.”- Joseph Doyle, Glen Cove

"This is just great. It makes me really proud to be from here and to see so much love and unity and I just feel like change is coming and we’re all going to make the world a better place today.”- Taylah Hudson, event speaker

"Systemic racism is a challenge throughout our nation and something that has to be addressed. I was here to be supportive of the march and I will say on everyone’s front, so far, as far as the marchers and the police who are taking care of us, it’s been beautiful to see freedom of speech in action. The other thing that is beautiful to see is that people are wearing masks and are distancing when they can.”- Gaitley Stevenson-Mathews, Glen Cove City Councilman

Roughly 1,000 protesters flocked to the North Shore to protest police brutality on June 7, marching in solidarity with the Black Lives Matter movement and victims of police brutality in the wake of George Floyd’s death at the hands of Minneapolis police.

The demonstration was organized in a matter of a few days on Facebook. It was originally supposed to take place in Sea Cliff, but organizers received so much support that the march grew to include Glen Cove as well, with Pratt Park as its starting point.

Organizers native to Sea Cliff and Glen Cove, as well as a few other speakers, addressed the crowd one at a time, giving messages of hope and appreciation toward one another. The day was about protesting systemic racism and police brutality, they said, and the North Shore residents must come together to show that they will not stand for injustice.

Among the organizers were Megan Tornatore, Stevens Martinez, Tea Henderson, Wesley Knox, Jason Samel and Olivia Knox. They all spoke on the importance of such an event, sharing their own experiences with racism as well its role in the world at large.

“Peaceful protesting is the best way to implement change,” Martinez, of Glen Cove, said. “Violence is not welcomed here and it will not be tolerated. We are asking people to please stay safe and to be peaceful and to have discussion about race in a peaceful manner. Let’s come to the table because, that’s the only way we can make true policy changes at the local level.”

Several more speakers addressed the crowd, including organizers and local religious leaders, before the marchers took off down Glen Cove Avenue. Over 99 percent of marchers wore masks to protect themselves and others from the coronavirus, and there was an immense diversity of cultural backgrounds throughout the protestors.

Although he was not an event organizer, Glen Cove resident Antwan Brown became the march’s de facto leader, marching up front and using his megaphone to direct the protesters.

Sounds of “No justice, no peace” rang out, along with chants condemning police brutality and President Donald Trump. The names of victims of police brutality were also shouted, most notably Floyd and Breonna Taylor, who was fatally shot by police in Louisville, Ky. on March 13.

All the while, Nassau County Police officers and officers from the Glen Cove Police Department guided the route, although most did not wear protective masks.

After turning on to Sea Cliff Avenue, protesters all knelt in the street right next to Clifton Park, where the protest was initially supposed to take place, reminiscent of former NFL quarterback Colin Kaepernick’s on-field protests against police brutality. Protesters encouraged police to show solidarity and do the same, but they refused.

Protesters asked why they refused, but received no answer. Some said this refusal to show solidarity is why the police scare them.

The only true sideline antagonism of the event came from the voice of a white man in his 50s or 60s near Sea Cliff Village Hall. “Go to Minneapolis!” he shouted to protesters, along with a long, loud series of expletives directed at them as protesters shouted their disapproval of what he had said, also using expletives. Police shielded the man from protesters, although no violence ensued.

Not one person or piece of property was harmed as protesters proceeded through downtown Sea Cliff before turning on to Carpenter Avenue and then Snake Hill leading to the Boulevard, walking parallel to the Sea Cliff Beach boardwalk.

“The people! United! We’ll never be divided!” protestors shouted as they received support from onlookers, one of whom took the helm of the boat parked in his driveway to sound its horn.

As the Boulevard turned to Glen Cove’s Shore Road and Glen Cove Police officers watched from the sides of the streets, protesters took another knee and encouraged police to the police to do the same. Again, they refused, although Chief William Whitton spoke with Brown and other protesters through a megaphone, saying he only kneels for God.

Brown said kneeling would show unity between protesters and the police, but Whitton still said officers would not and that not taking a knee does not show he is not in solidarity. This was met by a chorus of boos, with some protesters saying the police show no respect toward their cause. Nonetheless, marchers stood and continued.

Although some protesters continued on down Glen Cove Road for a short time, all were ultimately reunited at Pratt Park. Leaders and organizers took turns standing atop a bench, speaking on the importance of the event. All expressed their gratitude for a peaceful and powerful protest, one which they said will impact the North Shore’s future.

“All lives can’t matter until Black lives matter,” Brown said. “Go home and remember that we made history in Glen Cove today.”

Jennifer Corr contributed to this story.