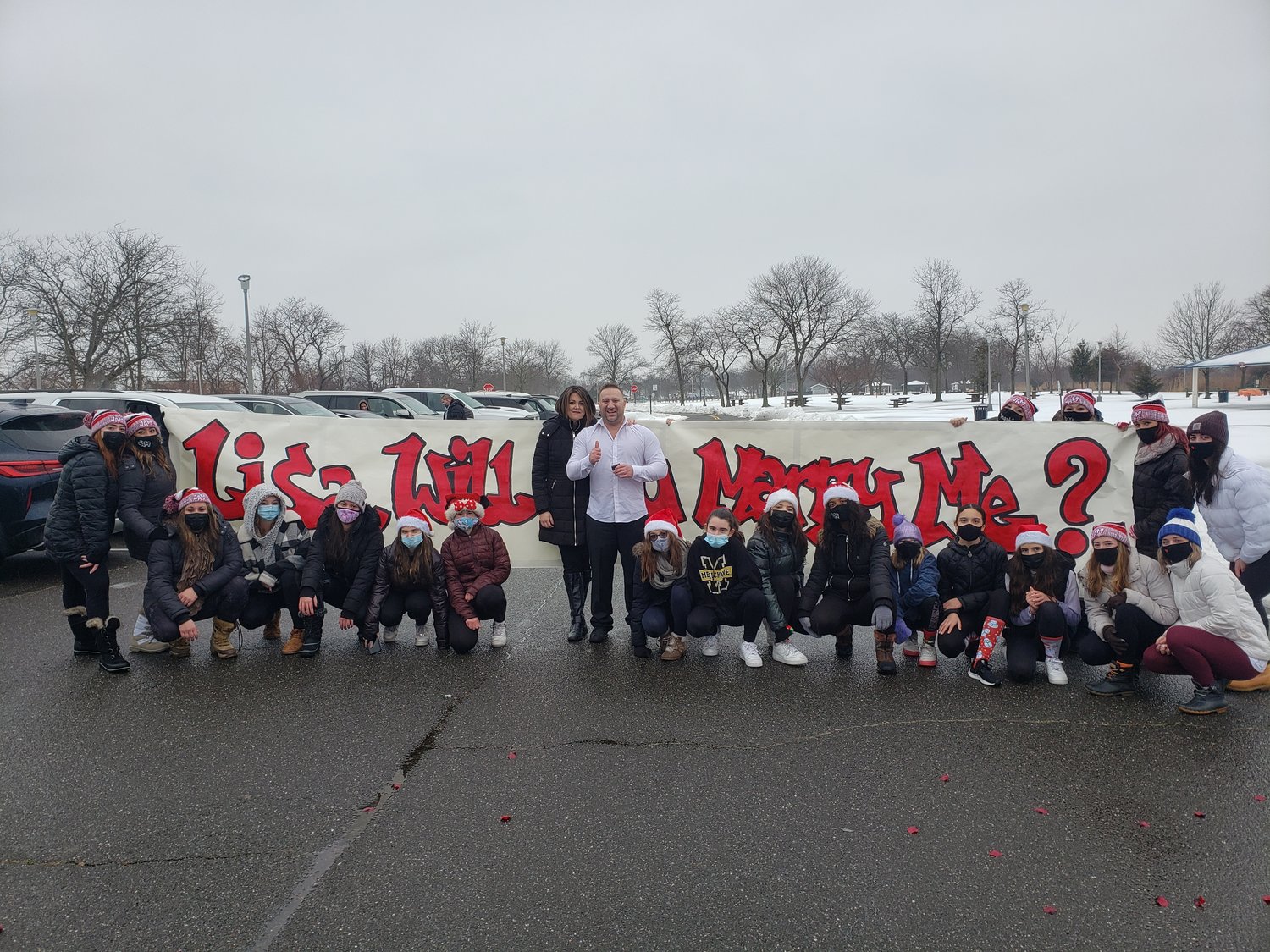 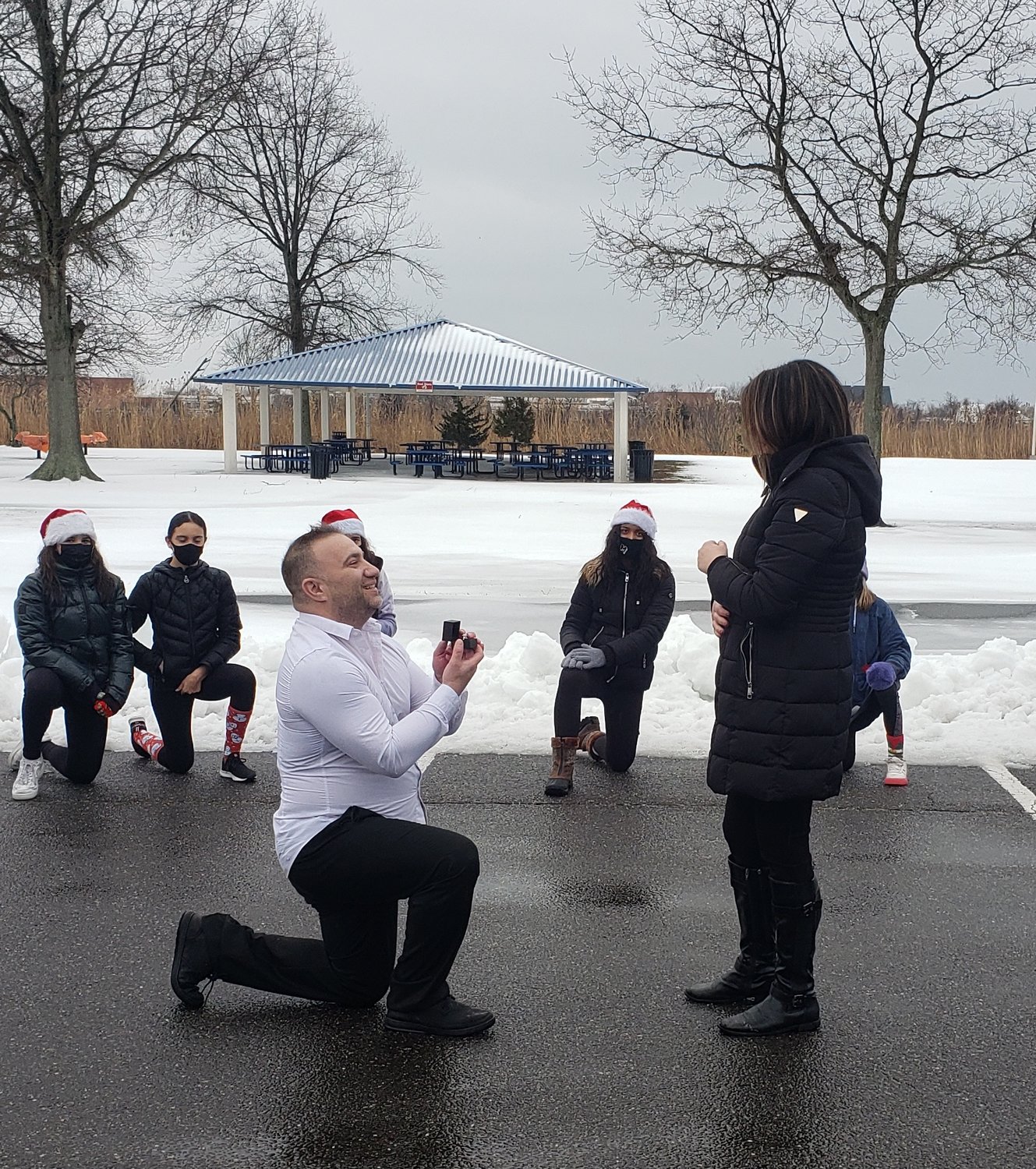 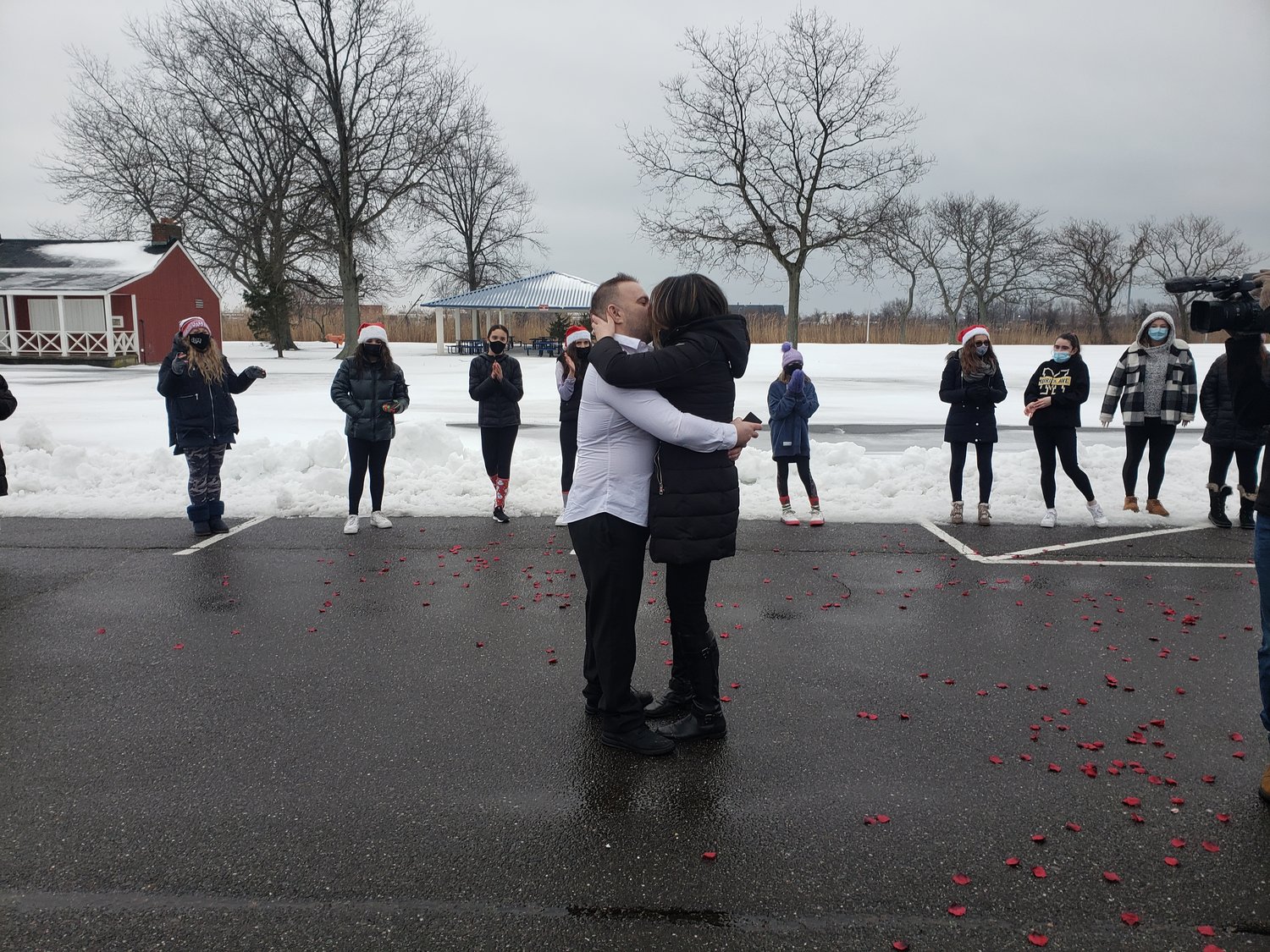 Once Friedrich said yes, the dancers threw rose petals in the air.
Courtesy Angela Connelly
Previous Next
By Alyssa Seidman

Evan Styron said he defied the odds when planning to propose to his girlfriend, Lisa Friedrich, of East Meadow. Between the Covid-19 pandemic, a last-minute location change and inclement weather the day of the engagement, “I had every obstacle against me,” he said, “but I’m resilient.”

On Dec. 20, 2020, Styron and Friedrich drove to Wantagh Park to attend a Christmas function — or so Friedrich thought. Once they parked, dancers from JAM Dance Studio in Bellmore filled the lot, flash mob-style, as Bruno Mars’ song “Marry You” blasted in the background.

“I was like a deer in headlights,” Friedrich said.

The couple met on Bumble about a year ago, just before the Covid-19 lockdowns put New York on pause. Friedrich, a hairstylist, said that since she and Styron are very similar, they found ways to stay entertained during quarantine. Last May, for example, the two dressed up in formal attire and decorated her home to hold a “prom-demic.”

“I’ve dated a lot of girls, but never one that made me feel compelled . . . to marry her,” said Styron, a licensed mental health counselor from Massapequa. “I knew from day one that she was the one.”

Styron said he and Friedrich knew they would get engaged before the end of 2020, but the actual proposal was still a “total surprise” to his fiancé. He got the idea to do a flash mob proposal after Friedrich showed him a video of one on YouTube last February.

“I love these styles of proposals because they’re very engaging,” he said, “and I wanted to do something that was like a magic moment for Lisa, something that made her feel special.”

To conjure the magical moment, Styron enlisted the help of Friedrich’s best friend, Angela Connelly, who lived next door to JAM co-owner, Gina Petitto, growing up. Although this was only JAM’s second flash mob proposal, it was “probably more exciting because everyone really needed some good news since quarantining,” Petitto said.

About 20 dancers participated in the flash mob, which was choreographed and rehearsed over the course of two weeks. Styron said he and Connelly scouted Cedar Creek Park in Wantagh as an initial location for the proposal, but had to change plans after a powerful nor'easter whipped across the region on Dec. 17.

On the day of the engagement, an unexpected storm threatened to ruin the special surprise, but for the 10 minutes the flash mob took place, Connelly said the weather cleared up. Some of the couple’s family and friends were on hand to surprise the bride-to-be. Everyone, including the dancers, stayed socially distant and wore masks.

As the team performed their choreography, Styron improvised a few of his own moves, twirling Friedrich around the parking lot and dancing along to the song. “Lisa’s face was priceless,” said JAM co-owner Michele Cuccaro. “She was in a shock in the best way possible . . . and couldn't stop smiling.”

As the song concluded, two of the dancers rolled out a 30-foot banner spray painted with red graffiti lettering, which asked Friedrich if she would take Styron’s hand in marriage. Styron said he rushed to get the ring out of the box once Friedrich realized what was happening.

“It was the most amazing day of my life, [and] a good finale to 2020,” Friedrich said. “I’m looking forward to a lifetime of memories.”

Styron said he is looking forward to spending more quality time with Friedrich and her son, Nicholas, 8. Petitto and Cuccaro said they hope to choreograph the couple’s first dance as husband and wife.