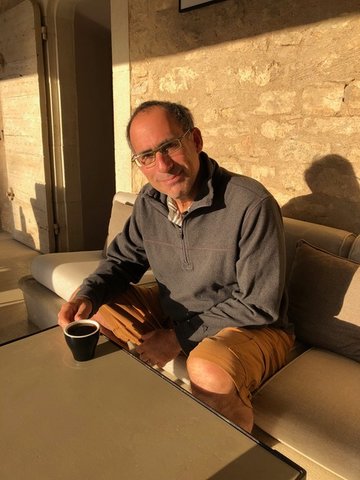 Reaching back to his childhood community, Jeff Wallach has written a book that encompasses plenty of places that are familiar to Five Towners in the 1970s, while plotting a story that could resonate with many people that never set foot on the South Shore.

“Mr. Wizard” tells the tale of two brothers, Phillip and Spencer, who believed they were Jewish-American and in Wallach’s words, “set off on a treasure hunt in search of who they really are and what that might mean to them.”

“A lot of people are taking DNA tests and are discovering surprises in parents, [being] adopted and ancestry,” Wallach said. “[We] never had that kind of science, where you could spit into a cup and find out all those things.”

Wallach’s life began in Brooklyn in 1960, the son of Sidney, a jeweler, and Rosemay (née Wolfe), a homemaker and retail jeweler. Growing up in North Woodmere, Wallach had writing on his mind since he was 12. Ernest Hemingway and Raymond Carver were influences.

“At Woodmere North Junior High School (now Woodmere Middle School), I had a teacher who was extremely encouraging,” he said, remembering seventh grade English teacher Lisa Huttner. “I wrote the worst short stories. She encouraged me.”

Taking that support to Vassar College, he graduated with a bachelor’s in 1982, and attained a master’s in fiction writing from Brown University two years later. Married to Renee Renfrow, a graphic designer and licensed massage therapist, Wallach who lives in Portland, Oregon, has enjoyed a successful writing career as the author of five non-fiction books and more than 1,000 articles, essays and reviews in the American Book Review, Men’s Health, The New York Times and Sports Illustrated.

Golf, a game that plays a part in the book, is a focus of Wallach’s writing. “In junior high I would play at North Woodmere all the time,” he said. “One person’s mother would drop four of us off and 12 hours later someone else would be pick us up.” Lawrence Country Club was another venue as Sidney played as well.

Delving into fiction, he had written two other novels that were not published, is different from nonfiction. “You don’t simply put on a different hat as so much get in involved in a different world,” Wallach said.

Placing his novel in the Five Towns allowed Wallach to reminisce, but he also had to fact check as he had not been back in years. Noting that his memory was faulty, Wallach said he rewrote scenes or changed the location of a scene. Through the book, Wallach wants readers to understand “what defines who we are.”

As an experienced writer, he said he was skeptical when a friend recommended using a book doctor to serve as a constructive critic and sounding board. “I talked to him and sent him a sample five to 10 pages,” Wallach said. “He was extremely insightful and I had him go through the book twice.”

Book doctor Dan Pope said he understood Wallach’s skepticism. “I think Jeff was skeptical because he’s an accomplished writer and published author, he might have thought he couldn’t benefit from my services,” Pope said. “I think he saw, based on my comments where the expanding or editing worked.”

The collaboration produced “Mr. Wizard” published by Open Books. A book that Pope endorses as a “great read” and Wallach’s writing reminds Pope of “Richard Russo at his best.” Russo is noted American novelist, short story writer, screenwriter and teacher.

“Mr. Wizard” is available for purchase at https://bit.ly/2Xdswlw.