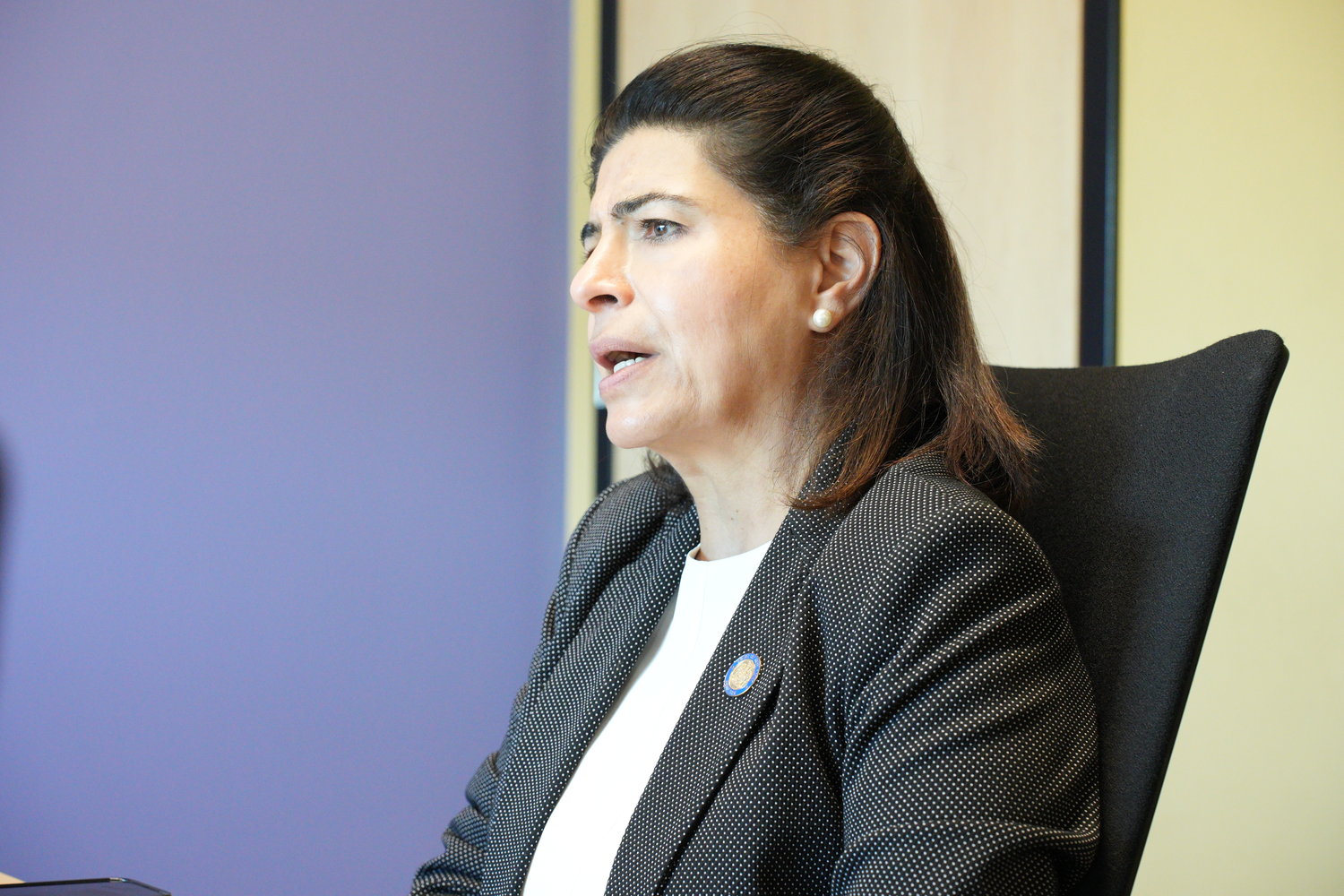 Anna Kaplan emphasized her continued support for law enforcement, while also highlighting the importance of building a relationship between police and their communities in her efforts to get re-elected to the state senate.
Tim Baker/Herald
By Will Sheeline

If Democrats are indeed soft on crime like many Republicans claim, Anna Kaplan makes it clear that list doesn’t include her.
The incumbent state senator has reiterated her support for
local police organizations across New York — something that, at least in the case of unions like the police unions for New York City and state troopers, is mutual.
Kaplan told reporters at a recent Herald Roundtable session it’s important law enforcement agencies get more funding. With that kind of money, they’ll be better trained and better prepared to protect their neighborhoods and communities.
It also would go a long way to change a lot of the public perception of police, which hasn’t been great in recent years.


“I want everyone to know that I support fully funding our law enforcement,” Kaplans said. “Period. I have brought back millions for our law enforcement for them to get the tools they need to keep our communities safe.”
That safety, however, also involves keeping guns off the streets, and out of the hands of those who shouldn’t have them in the first place. She highlights that through her efforts to restrict the sale of “ghost guns” — self-assembled guns without serial numbers — in the state.
Although she doesn’t commit to banning the sale and license to own military-grade weapons like AR-15s, Kaplan did say she’ll intended continue her fight to rid the state of illegal and unmonitored firearms.
“I think banning ghost guns was a big deal,” the senator said. “It was one of my proudest moments, getting that through the finish line and getting it signed by the governor.”
But for military-grade weapons? That “is a conversation that we’re having, and if my residents want that, I’m more than happy to have that conversation.”
However, there is a limit to where Kaplan wants police — like on school campuses, citing data she says suggests there is no safety benefit to students. Even more, adding guns to schools also won’t solve the problem of school shooters, something evidenced by what happened last spring with the elementary school shooting in Uvalde, Texas.
What does belong in schools, however, are books, Kaplan said. All of them. She doesn’t support banning books, something she has already experienced firsthand in a negative way as a religious refugee from Iran.
For Kaplan, banning books is an affront to the freedom and beliefs of the United States.
“I came to this country because of the value of democracy,” she said. “We can have different philosophies, and we can always have different views. But I sure hope America’s never recognized as a country that allows banning books.”
One of her strongest stances, however, has been with abortion access and women’s health care rights — especially in light of last summer’s ruling from the U.S. Supreme Court that essentially overturned federal protections granted through Roe v. Wade.
Kaplan doubled down on the importance of codifying women’s right to an abortion in New York., such as with the Equal Rights Amendment, which she helped initially pass. This amendment to the state constitution prohibits discrimination by the government against a wide range of minority groups, and prevents the government from restricting reproductive autonomy. But it won’t be effective until it makes it rhrough the state legislature.
“It is something that I believe very strongly in, and was one of the main reasons I ran for this seat,” Kaplan said. “I wanted to codify Roe and abortion into our state law. It is imperative that we pass (the Equal Rights Amendment) again, and put it out to a vote so that we can enshrine it into our constitution.”
Report an inappropriate comment