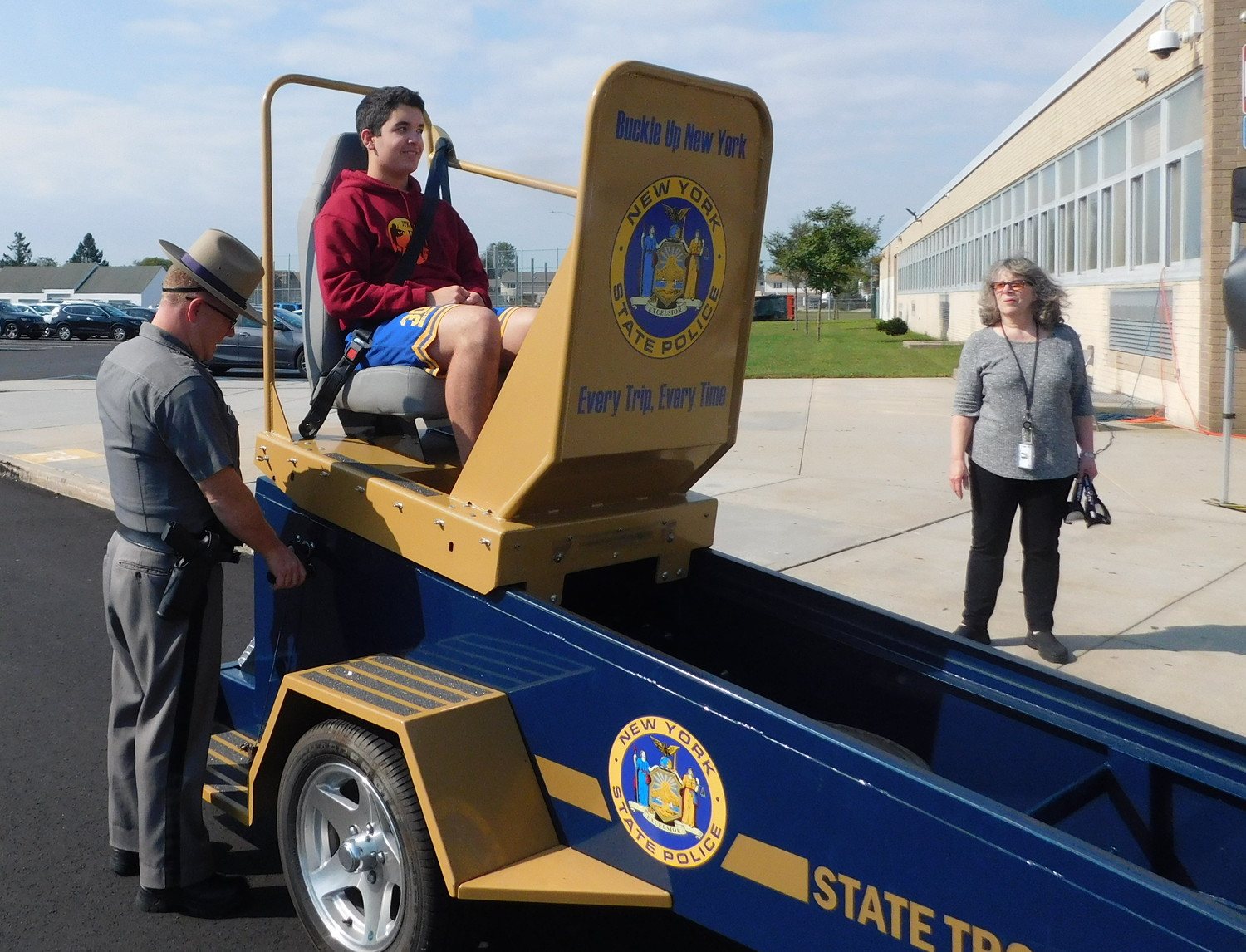 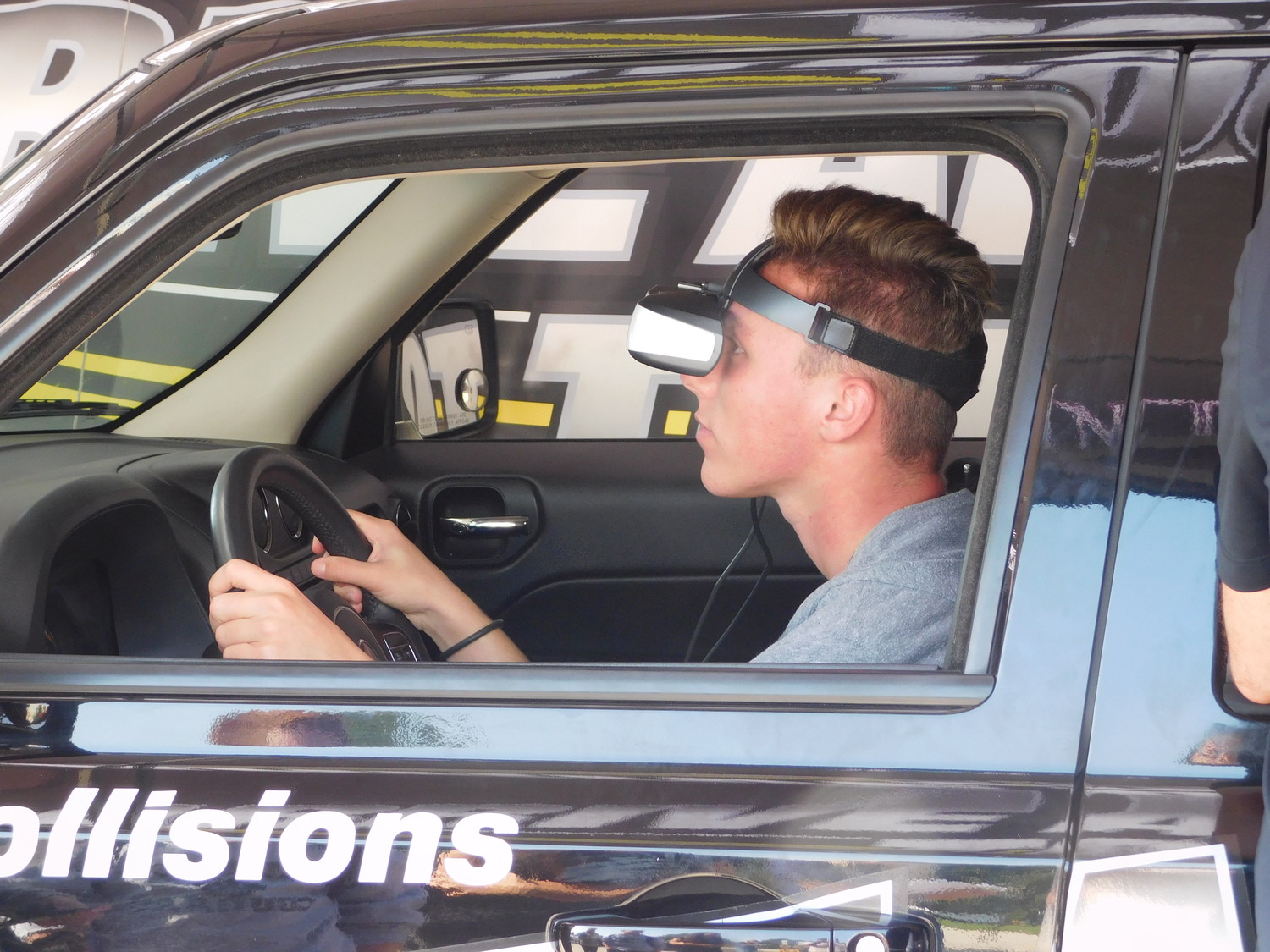 Jason Baker tried to focus, but the impairment got the better of him — his simulation ended in a crash.
Andrew Garcia/Herald Life 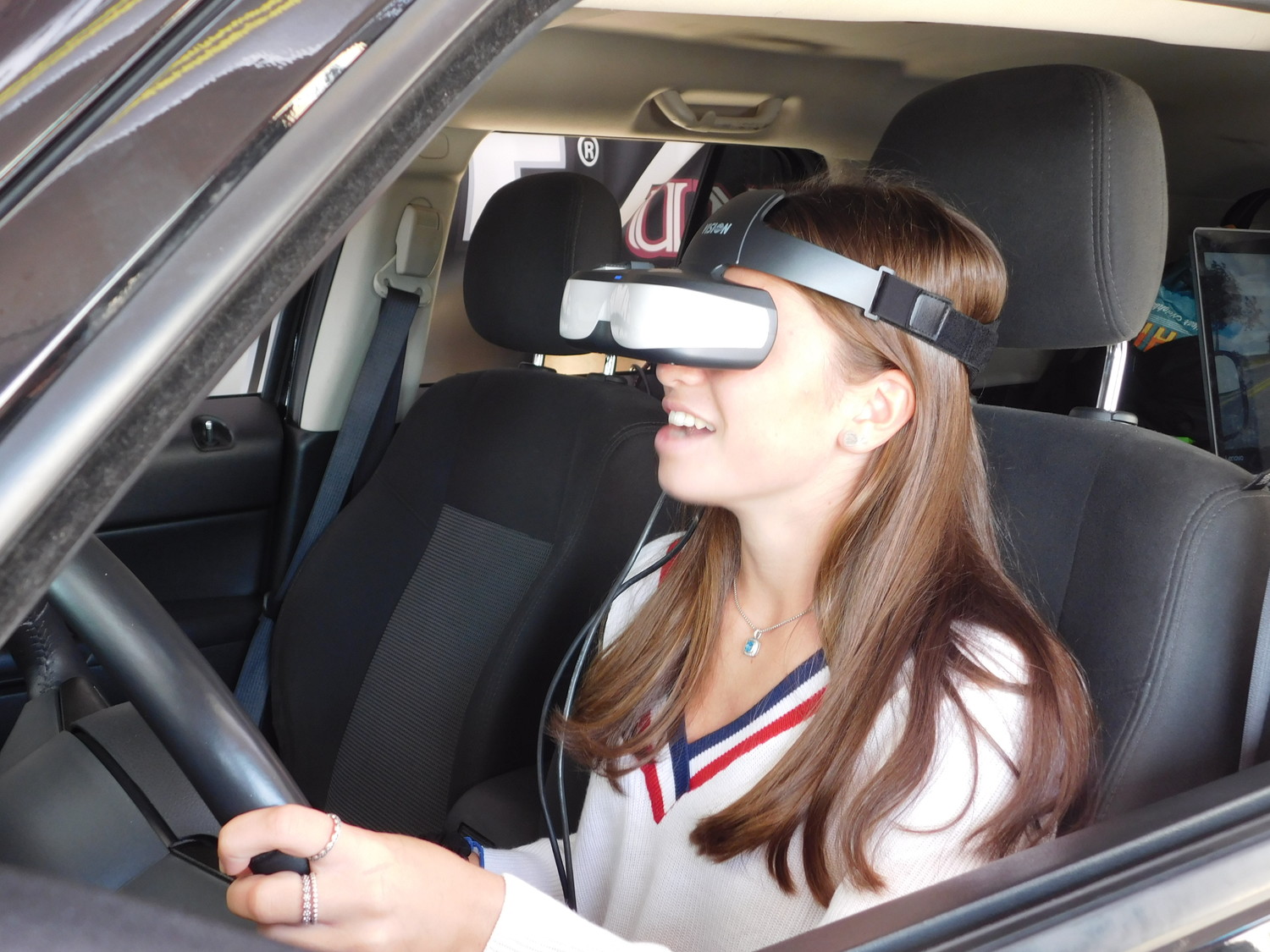 Students at John F. Kennedy High School on Monday got a jolting taste of the dangers of driving while impaired or distracted.

Community Parent Center Director Wendy Tepfer organizes the event annually at each of the three high schools in the Bellmore-Merrick Central District. The lessons it brings, she said, are essential.

“This event offers experiential learning by actually doing it,” Tepfer said. “We want students to think, ‘If I’m in this situation, what would I do?’”

The session has a variety of simulations that replicate what it is like to be an impaired driver, or in dangerous driving situations. Young drivers can use “drunk goggles,” which impair vision in a similar way to being intoxicated. The students attempt tasks using toddlers’ toys, such as matching block shapes, which the goggles make difficult.

State Police Troopers Dan Ahlgrim and Kristen Erario, of Farmingdale Troop L, also brought a “seat belt convincer,” a seat that sits atop a slope, which participants use while buckled in, and simulates what it feels like to be in a car crash. The convincer only demonstrates crashes at 5 to 7 miles per hour, but the force of the impact is still jolting.

“Imagine what it feels like at a higher speed,” Erario said. “Anyone that rides it should be convinced to wear a seat belt at all times. Even in the back seat of a car, which you don’t legally have to wear if you’re over 16, a seatbelt should be worn. If the driver and front passenger are wearing their seat belts, they’re secured, but someone in the back without it will be exiting the vehicle through the windows in a crash. It ends in major injury, if not death.”

Unite’s Arrive Alive virtual reality driving simulation allowed students to get behind the wheel of a car and don a virtual reality headset that simulates driving while drunk, high on marijuana or distracted by texting. Most simulations end in crashes or failures, as infractions for speeding, swerving, collisions and vehicular manslaughter are noted.

Car crashes are the leading cause of death among teenagers, and 24 percent of those deaths involve underage drinking, according to the National Highway Traffic Safety Administration. Driver distractions, such as texting, are responsible for more than 58 percent of teenage-driver crashes, according to the American Automobile Association.

Tom Gilberti, a retired Nassau County police officer, Marge Lee of DEDICATEDD, an organization that helps victims of drunk drivers, and students from the school’s SADD Club assisted with the simulations.