Law would restrict vape shops in Town of Hempstead 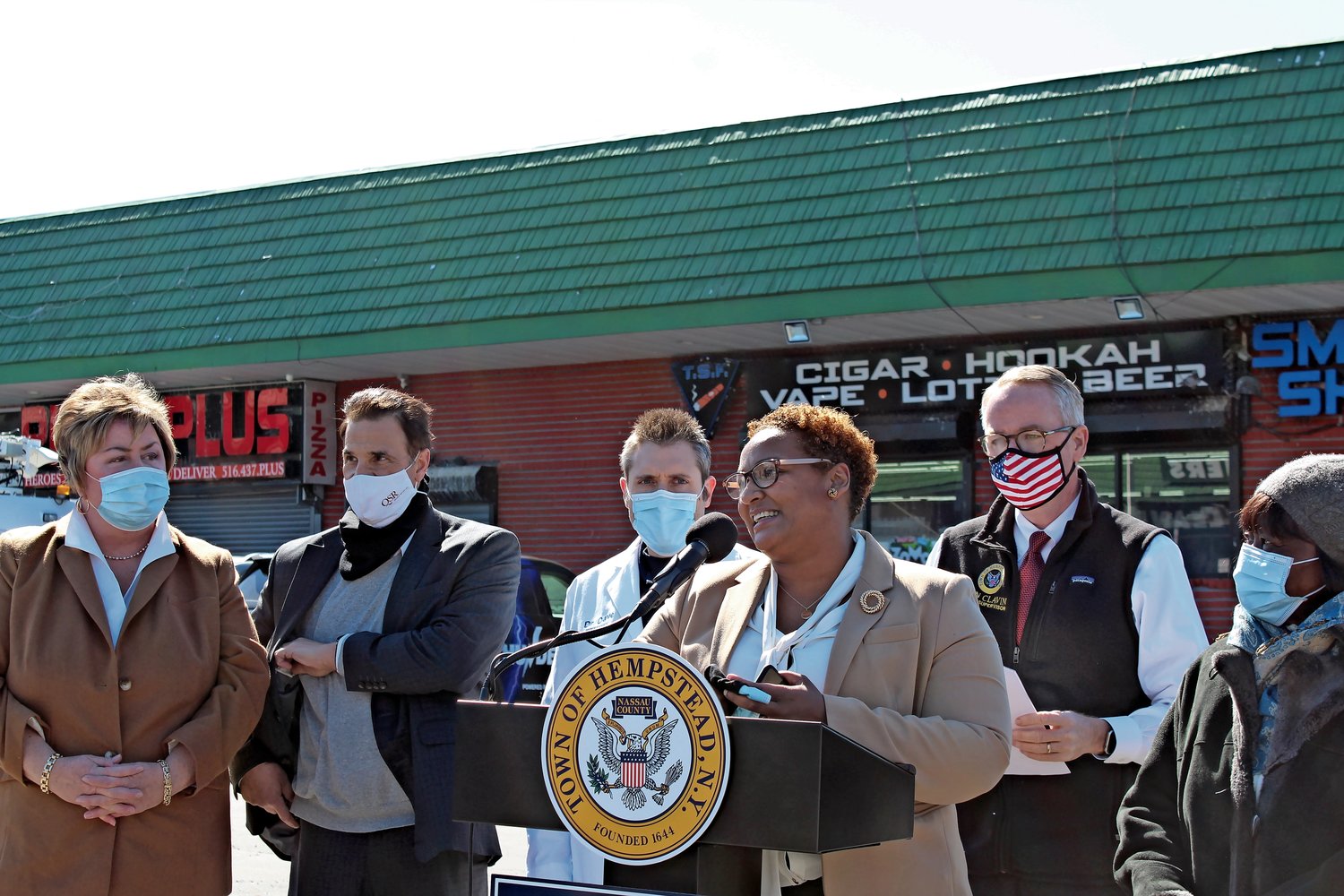 Tiffany Capers, at lectern, petitioned the Town Board to create legislation limiting where smoke shops can operate. She was joined by town officials at a news conference on Monday to announce the legislation.
Melissa Koenig/Herald
The risks of vaping in adolescents

Most e-cigarettes contain nicotine, which can harm a developing adolescent brain.

Nicotine can harm the parts of the brain that control attention, learning, mood and impulse control.

Nicotine changes the way the brain’s connections are formed.

The use of nicotine by adolescence may increase the risk of future addiction to other drugs.

Some e-cigarette flavorings may be safe to eat, but not to inhale because the gut can process more substances than the lungs.

Defective e-cigarette batteries have caused fires and explosions, a few of which have resulted in serious injuries.

Children and adults have been poisoned by swallowing, breathing or absorbing e-cigarette liquid through their skin or eyes.

Tiffany Capers marched down to the Town of Hempstead’s tax office a year and a half ago, when then Receiver of Taxes Donald Clavin had just been elected town supervisor, to show him how vape shops were targeting teenagers with their advertisements and to express her concern with a shop that had opened across the street from Elmont Memorial High School.

Clavin’s staff spent over a year collaborating with Capers on the issue, and on Monday he announced that the Town Board would enact legislation restricting where the electronic cigarette stores could operate.

“The Safer Routes legislation is what happens when local government and the community work together to do something,” Capers, an Elmont mother, said at a news conference in front of the Smoking Factory, on Elmont Road, adding that the measure was an “example of what happens when you do what is right instead of what is easy.”

The legislation would prohibit the sale of e-cigarette or vaping products within 1,000 feet of a school, playground or park, and would change the town’s zoning laws to restrict these businesses to light manufacturing or industrial zones.

“They’re putting them near these schools for a reason, folks,” Clavin said of the vape shops, noting that they could be found near many of the town’s 36 high schools. “They’re targeting these areas be-cause they want to get them hooked on this stuff very, very young, and this legislation is clearly going to take [them to] task and address that.”

If approved by the town board on Tuesday — after the Herald went to press — the zoning changes would be enacted next Jan. 1, and two months earlier, on Oct. 31, the restrictions on where vape shops could operate would go into effect, Clavin said, at which point the Smoking Factory would have to cease operations. Not only is it across the street from the Elmont High fields, but it is also adjacent to the Martin de Porres School for Exceptional Children, and only a few hundred feet from St. Boniface Roman Catholic Church and the St. Gregorios Orthodox Church.

Smoking Factory Owner Rajat Loonia, however, noted that some of the shops have been at the same locations for more than 30 years, and that while he agrees that the town should pass this kind of law, it should only apply to new stores.

The Smoking Factory opened in the summer of 2019, prompting Capers to research the town laws on e-cigarette sales. She discovered that the town did not regulate the proximity of stores selling age-restricted products to schools, even though both the Village of Floral Park and the Town of North Hempstead did.

Then Capers created an online petition to persuade town officials to draft similar legislation. She collected nearly 530 signatures, including comments like, “The vape shop does not belong in this neighborhood, let alone across from a high school” and “Our kids have a lot of pressure, they definitely don’t need the lure of a smoke shop in close proximity.”

Elmont High Principal Kevin Dougherty said that several hundred students pass the Smoking Factory on their way home after school, at a time when more teens are using vaping products. Their use among eighth- through 12th-graders has more than doubled since 2017, according to the 2019 National Youth Tobacco Survey, with 27.5 percent of high schoolers and 10.5 percent of middle schoolers reporting using e-cigarettes. More than 20 percent of high schoolers reported vaping on a nearly daily basis.

The Town Board has since created an Anti-Vaping Action Plan, with increased code enforcement efforts, an educational anti-vaping forum series at local schools and libraries, and a multimedia campaign. In addition, the town has passed laws requiring “No vaping” signs at town parks and beaches, and requiring businesses that sell vape pens and e-cigarettes to post signs explaining their potential health hazards.

“These are very dangerous nicotine delivery devices,” said Town Medical Director Dr. Dave Neubert. “The companies that make these, they make them so they deliver nicotine, a highly addictive chemical, and they’re designed to deliver that . . . into the bloodstream, where people get a very quick high off of it and get very quickly addicted to it.”

The chemicals in these products, which cause serious lung damage and cardiovascular problems, go unregulated, Neubert said. And since the coronavirus pandemic began, the Truth Initiative — an organization that promotes tobacco-free lives — has reported that those who have used e-cigarettes are five times more likely to contract Covid-19 than those who do not use tobacco products, and that those who use both e-cigarettes and cigarettes are nearly seven times more likely to contract the disease.

“That’s why it’s just so important that we have community activists, and we have the Town Board, and we have our medical team working together to put laws like this out there,” Neubert said, “because it’s protecting our children, it’s protecting everyone around us and it’s the right thing for town government to be doing.”