Number Five School in Cedarhurst to be closed 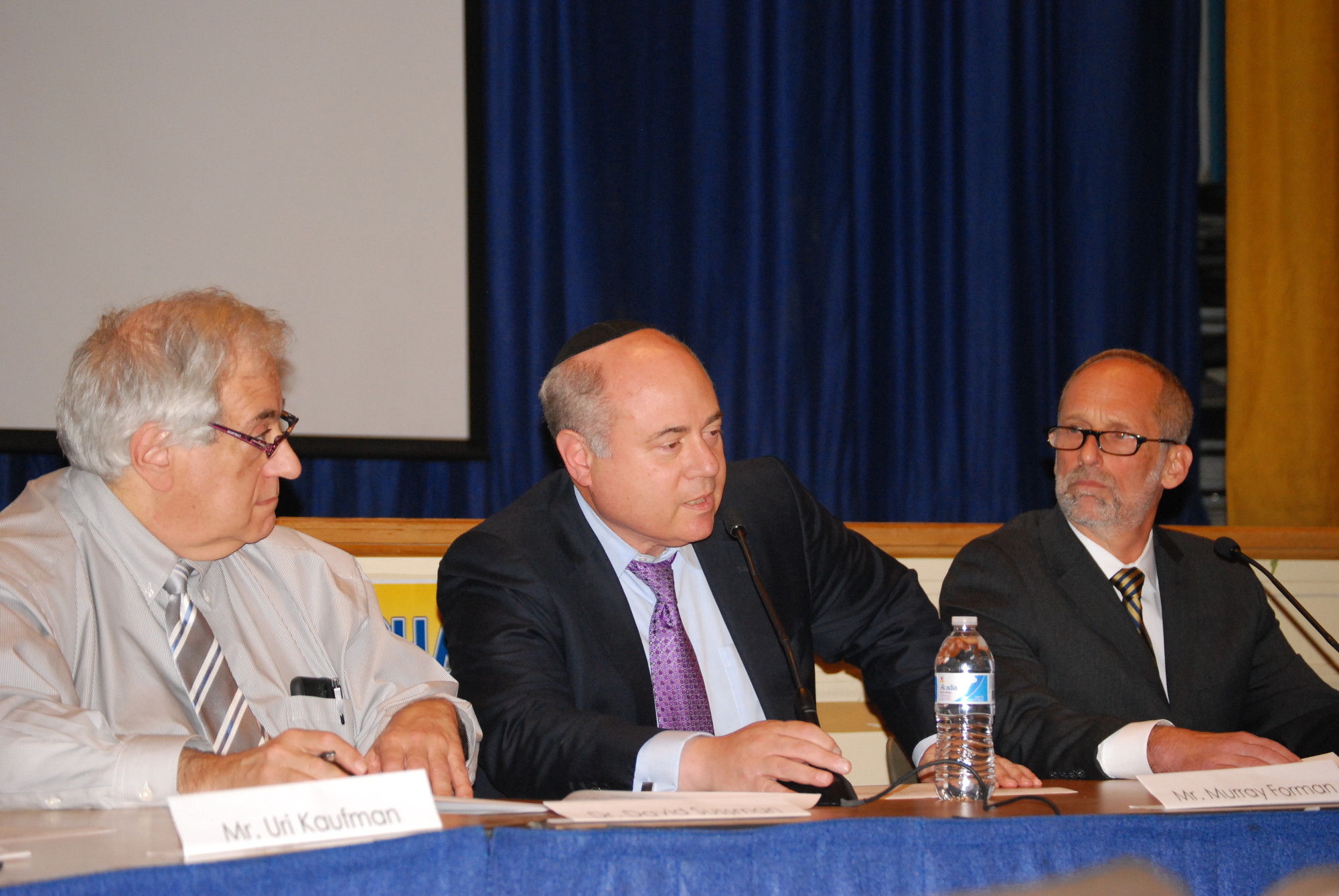 The Lawrence School District’s Board of Education approved a restructuring plan at its Dec. 8 meeting. From left at a meeting earlier this fall were Trustee David Sussman, board President Murray Forman and Superintendent Gary Schall.
Jeffrey Bessen/Herald 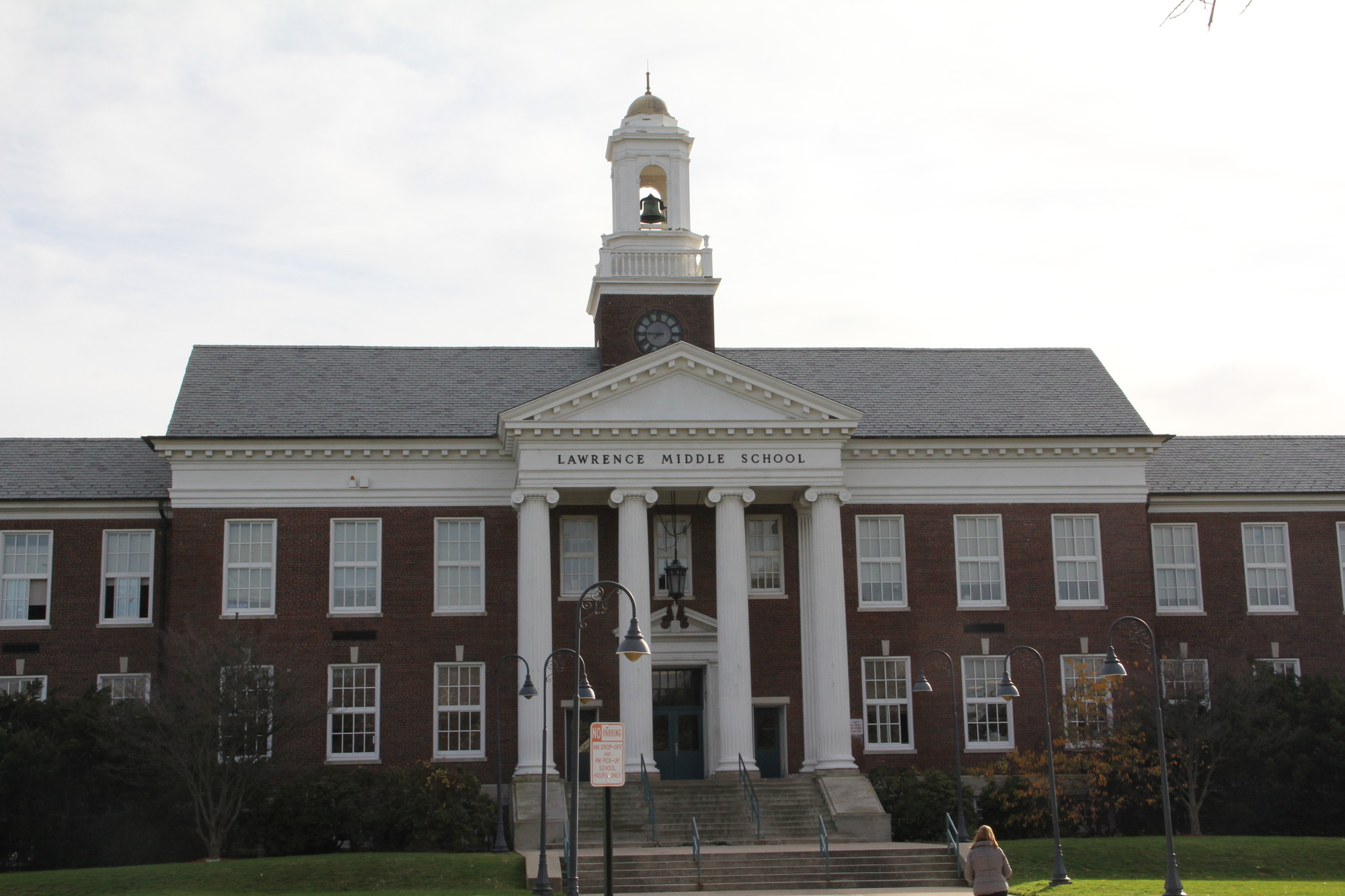 A contest is under way to rename Lawrence Middle School, which will house both upper and lower schools beginning in September 2015.
Christina Daly/Herald
Previous Next
By Jeff Bessen

At its Dec. 8 meeting, the Lawrence School District’s Board of Education unanimously approved a restructuring plan that is to take effect next September, and includes creating upper and lower schools in what is now the middle school and closing the Number Five School.
The plan, which was introduced at a board meeting on Oct. 27, calls for moving the district’s third- and fourth-graders to the middle school and creating a lower school that will include fifth-graders, while creating an upper school for sixth-, seventh- and eighth-graders. Pre-K and kindergarten students will remain at the Number Four School, and the Number Two School will be used exclusively for the first and second grades.
The realignment is based on the Princeton Plan, which organizes school districts based on grade levels rather than where people live in the community. It is named for the New Jersey suburb that desegregated its schools in 1948, six years before the Supreme Court’s Brown v. Board of Education decision.
Princeton moved all of its elementary students into one school (formerly the all-white school) and its middle school students into the other (the former all-black school).
“It will more closely align the delivery of educational services with the state mandates to enhance learning,” said Lawrence board President Murray Forman, referring to the recently implemented Common Core State Standards. “For the kids moving into [the middle school] building, it is an upgrade in facilities, and it’s the fiscally responsible thing to do.”


Leasing the Number Five School is expected to generate $350,000 in annual revenue, according to district officials, while saving more than $550,000.
The board is expected to select a real estate broker to market the building at its Jan. 12 board meeting, Superintendent Gary Schall said. Lawrence is seeking to rent space to an organization that caters to special-needs children while the district retains ownership. The school’s top floor would accommodate the 105 special-needs students who now attend schools outside the district. The lower floors will be used by the leasing agency.
A district analysis, conducted last summer, determined that space at the middle school was being under-used: There are 11 empty classrooms, and several others are being used as office space. The restructuring will also include a $300,000 renovation of space in the high school that will shift central office administrators, transportation, business, and the superintendent and assistant superintendents from the middle school to the high school. The board authorized the use of those funds at the Dec. 8 meeting. Overall, there will be at least 22 classrooms available in the middle school building, and a music and art suite will be created.
Schall said he believed that by using the Princeton Plan and organizing the grade levels around the state standards curriculum and assessments, students would receive more focused instruction. “The narrow age spans will facilitate increased teacher specialization on developmental levels,” he said. “Without the current separation of students in grades one through four in two elementary schools, grade levels will now travel together as one school community from pre-kindergarten through 12th grade.”
The Island Trees School District shifted to the Princeton Plan beginning with the 2010-11 school year. One elementary school houses kindergarten and first grade and another has second through fourth grades. The district saves nearly $600,000 a year, according to officials. Superintendent Charles Murphy said that the change created many concerns, ranging from moving classroom equipment and supplies from one school to another to transportation, including arrival and dismissal times, to district culture.
“It’s not easy to change almost 60 years of tradition overnight without having a few bumps in the road or tears in the eyes for that matter,” Murphy wrote in a January 2011 letter to district residents. He told the Herald: “This has worked out well for us. We would do it again.”

Renaming the middle school
With Lawrence Middle School soon to have both upper and lower schools, a new name is needed. The school district is running a Rename the School contest. Submissions can be made to feedback@lawrence.k12.y.us or nassaueditor@liherald.com. The deadline is Feb. 15. The winner or winners will be recognized by the district.

Have an opinion about Lawrence’s restructuring? Send your letter to the editor to jbessen@liherald.com.
Report an inappropriate comment