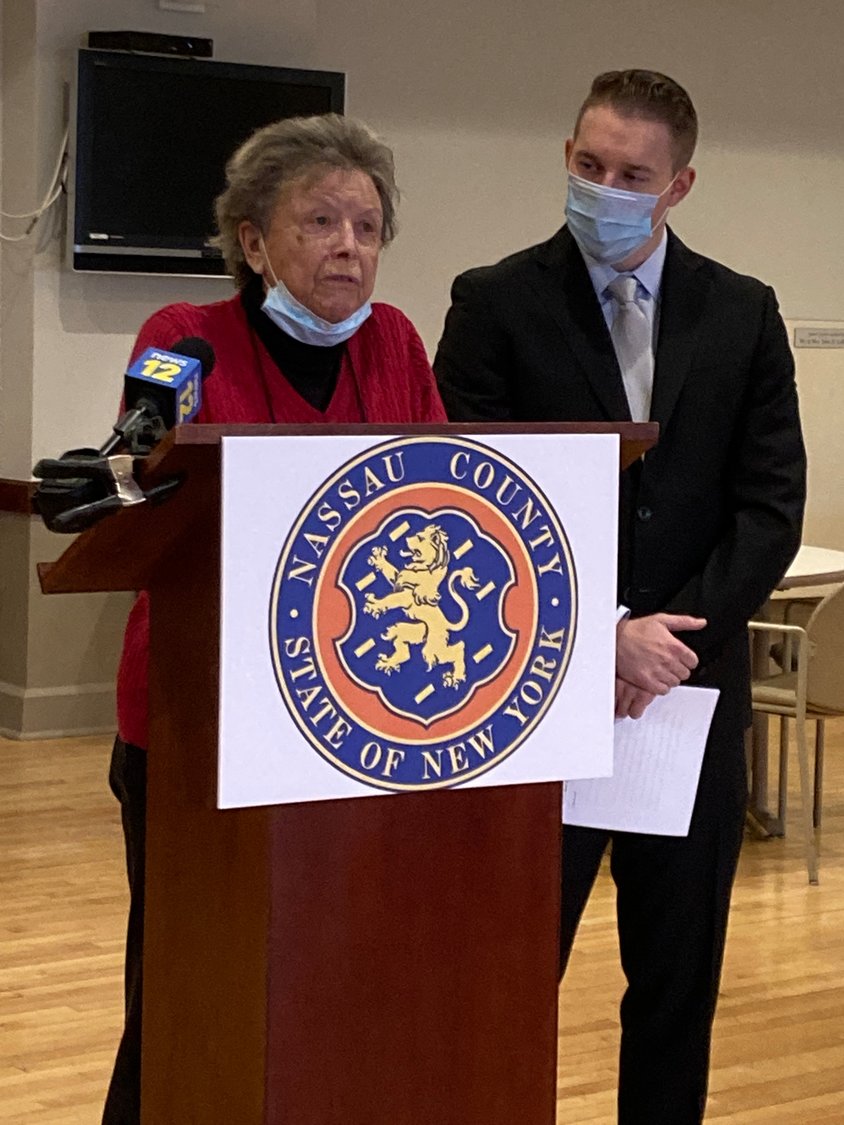 Eleanore Cronin, a lifelong Oyster Bay resident, had to sell her house and move into an apartment because she is no longer able to drive, and without public transportation, she must walk to stores or depend on friends and family members to give her rides.
Laura Lane/Herald

If you don’t drive in this area, you’re lost. And if it wasn’t for the people here at the center, I’d be home with no one to speak to.”
Eleanore Cronin, East Norwich
By Laura Lane

Nassau County Legislator Josh Lafazan held a news conference on Monday at the Life Enrichment Center of Oyster Bay to decry the lack of transportation options available to senior citizens living in the 18th District. And Lafazan had some suggestions on what can be done about it.

Although the shared-ride program funded by the county, Able-Ride, is available to residents in parts of Nassau County, it is not on the North Shore. As a result, seniors living in Oyster Bay, Bayville, Locust Valley, Woodbury, Syosset, Woodbury and East Norwich are being forced to isolate, Lafazan said.

“There are 1.3 million residents in Nassau County, with seniors making up one-fifth, or 18 percent, of the county’s population,” he said. “This is about taxation and fairness. They pay taxes but have no access to Able-Ride.”

And when a senior needs to hire a home care aide, he or she must also make sure the person can drive, which Lafazan said is difficult to do.

Without another means of transportation, seniors at Life Enrichment depend on the center’s bus. Beth Spickler-Lerman, the center’s social worker, said that before the coronavirus pandemic began, a handicapped-accessible 14-seat bus was available to members seven days a week for rides to and from the center. Now that the facility has lost some of its bus drivers, and with some members too frail to travel, it operates only two days a week, Tuesday and Friday, limiting members’ opportunities to socialize and enjoy a hot meal at the center.

These limitations don’t exist in other areas of the North Shore. Two days a week from 11 a.m. to 2 p.m., residents of the Town of North Hempstead have access to taxis that offer senior rates. That’s helpful, Spickler-Lerman said, because seniors can plan their doctors’ visits then, and can be independent. Those who live in and around Oyster Bay don’t have that luxury, but should, she added.

Lafazan said he would ask County Executive Bruce Blakeman to contract with NICE Bus to expand Able-Ride services, and would also ask his fellow legislators for their support. “I trust that my colleagues on both sides will see that this is vital,” he said.

Blakeman’s office said the county executive had not heard from Lafazan yet.

Lafazan said he had also written to U.S. Secretary of Transportation Pete Buttigieg, requesting that he expand federal credits for seniors for ride-sharing services like Uber and Lyft. Last spring, ride-share providers partnered with the federal government to offer free rides nationwide to vaccination sites.

“Many seniors can’t drive,” Lafazan said. “They struggle even to pick up their medication. The [ride shares] would help seniors to live happy, healthy independent lives, and they wouldn’t need a smartphone to book a ride. They could call.”

“Social isolation is detrimental to older adults,” Judy Palumbo, Life Enrichment’s executive director, said at the news conference. “Access to transportation is a necessity, not a luxury.”

Spickler-Lerman said that taking a cab from Oyster Bay even to someplace relatively close, like Glen Cove, is too costly for seniors on fixed incomes. “This is a growing problem that is not going to go away,” she warned.

Eleanore Cronin, a lifelong Oyster Bay resident, said she had to stop driving six years ago because she has macular degeneration, making her dependent on family and friends. She has had to cancel doctors’ appointments, she said, because no one was available to give her rides. Cronin sold her house and moved to an apartment in Norwich Gate so she could walk to stores.

“If you don’t drive in this area, you’re lost,” she said. “And if it wasn’t for the people here at the center, I’d be home with no one to speak to. I haven’t been to a mall in years because I can’t get there.”

Jonathan Rudes, a community activist who lives in Woodbury Gardens, said seniors need to get around to help stimulate the economy. “A senior who finally gives up their car on Long Island is stuck in and often isolated,” Rudes said. “They can’t go shopping, they can’t go to friends and family or participate in social activities … Long Island takes a large group of consumers out of the economy by limiting their access to Long Island’s shopping districts. The last thing we want to do is leave New York, but if you’re homebound and isolated …”

Lafazan said the issue is personal to him, because the death of his grandfather last year has left his grandmother dependent on others. “She doesn’t drive or have public transportation accessible,” Lafazan said. “I double as her driver. She is bound to the schedule of someone who will take her anywhere. I’m 28 years old. I feel I have an obligation to take care of the generation before us.”