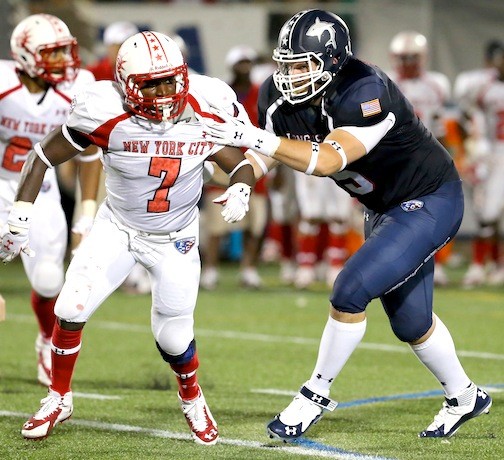 Despite allowing 268 rushing yards and going 1-for-9 on third-down conversions, Long Island continued its recent dominance of New York City by capturing the 19th annual UnitedHealthcare Empire Challenge football all-star game, 24-18, before a record-crowd of 9,762 at Hofstra’s Shuart Stadium on June 25.

Long Island never trailed in winning a fourth straight matchup and for the fifth time in six years. Quarterback Ben Kocis (Huntington), who directed a 95-yard scoring drive in the second quarter and threw a touchdown pass in the fourth, took home MVP honors. Linebacker Lawson Prendergast (St. John The Baptist) had a 24-yard interception return for a touchdown in the fourth and six tackles.

“It was such an honor to play with all of these all-stars,” said Kocis, who completed 10 of 15 passes for 165 yards. “It’s the last time I put on a football helmet, so I wanted to leave everything on this field.”

Lawrence quarterback Joe Capobianco (3-for-7, 73 yards) led a scoring drive late in the first half, Carey’s Andrew Ris had three receptions for 51 yards, Sewanhaka’s Elijah Smith recovered a fumble, and James Kretkowski (Oceanside) and Brian Burke (Lynbrook) were key parts of an offensive line coached by Mike Stanley of Carey.

“It was a great two weeks working with the kids and coaches,” said Rick Punzone, who served as Long Island’s head coach after guiding Babylon to a second straight L.I. Class IV title. “We wanted to win and keep the streak going. The kids pushed each other in a friendly way and did everything the coaches asked.”

Established in 1996, the Empire Challenge showcases some of the best football talent in the state and benefits the Boomer Esiason Foundation for cystic fibrosis, the Gunnar H. Esiason Scholarship Fund at Hofstra, and local youth sports programs. “It is a night when we acknowledge the outstanding skills of the coaches, the athleticism of the players, and the strength of the football programs in our area,” Boomer Esiason said.

Long Island’s defense set the tone early, stopping New York City on a pair of fourth-down attempts in the first quarter. Jake Carlock (Babylon) batted down a pass in the end zone to end NYC’s opening possession, which stalled at the 13, and Prendergast stopped Justin Guerre at the L.I. 33 to thwart the following drive.

“They got some yardage, but we made some big plays on defense,” Punzone said.

Long Island broke a scoreless tie in the second quarter when a special Empire Challenge rule worked to its advantage. Teams are permitted two punts per half, and L.I. had already punted twice when it faced fourth-and-10 from its own 5-yard line. Kocis, who misfired on his first three attempts, rolled out and delivered a strike to Ris for 17 yards to move the chains.

Kocis then connected with Trent Crossan (Sachem North), Curtis Jenkins (Farmingdale), Elijah Jones (Lawrence), and Sam Ilario (West Islip) to set up his 5-yard touchdown run. It was 8-0 after Ris took the extra-point snap and threw a two-point conversion pass to Carlock.

Long Island led 11-0 at halftime after Bryan Morris (Sachem North) booted a 24-yard field goal with 21 seconds remaining in the half. It capped a drive highlighted by Capobianco’s 60-yard completion to Crossan. “It felt good to play one more game on this field,” Capobianco said.

It was 11-8 when Kocis hit tight end Josh Valentin (Commack) for a 44-yard touchdown on the second snap of a fourth quarter that featured more than half of the game’s points. Ris sealed the outcome by recovering an on-sides kick with 1:47 left.

“With three great quarterbacks, we knew throwing would be our mantra,” said Punzone, who started Carey’s Ray Catapano, the 2013 Thorp Award winner.

With the victory, Long Island increased its series lead to 11-6. Twelve of the 17 meetings (in 1996 and ‘97 the Empire Challenge featured Nassau vs. Suffolk) have been decided by fewer than eight points, including four by a point.