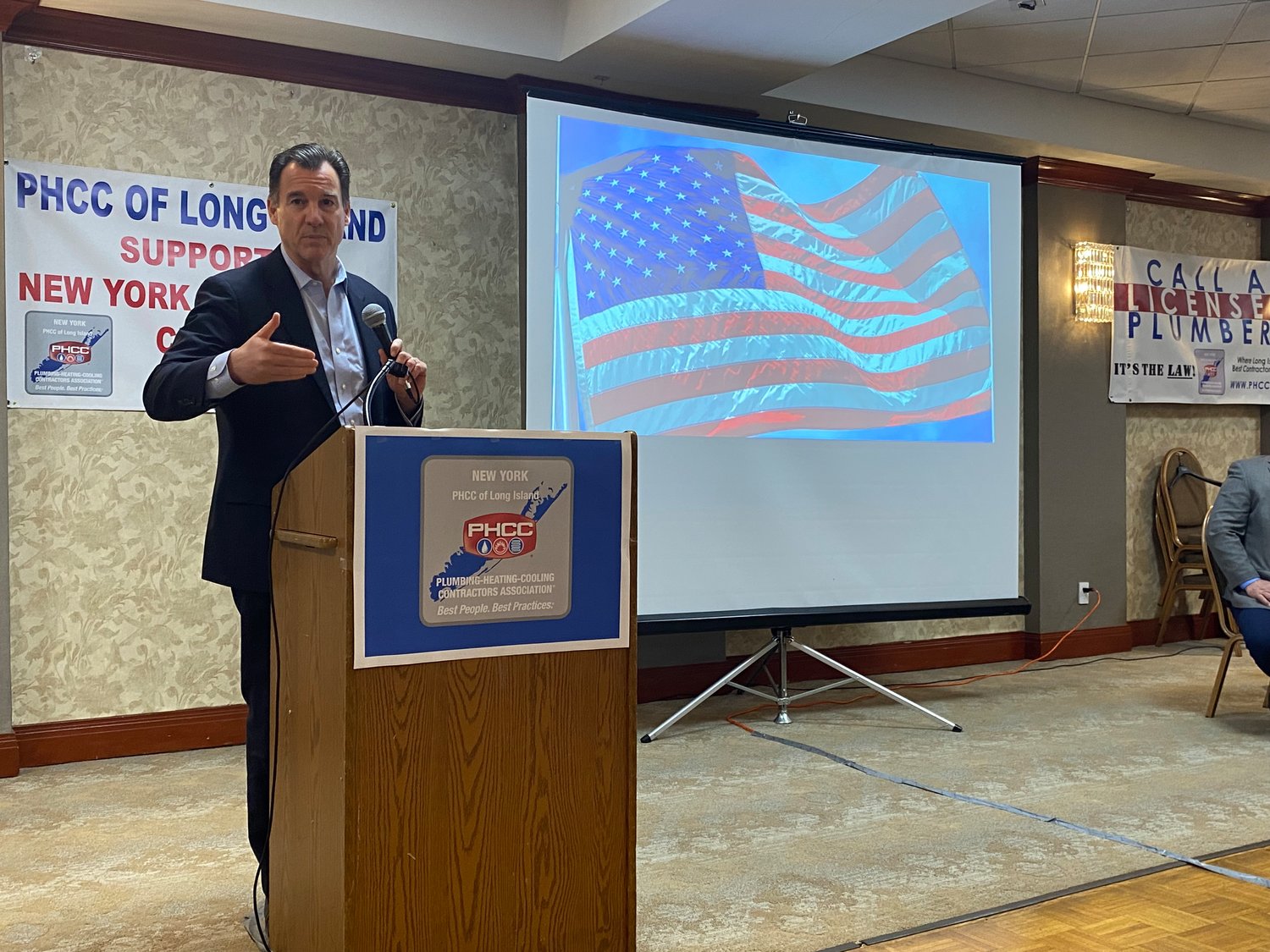 Gubernatorial hopeful Tom Suozzi (D) speaks in opposition to legislation intended to phase out natural gas heating in New York state starting by the end of next year.
Tom Carrozza/Herald 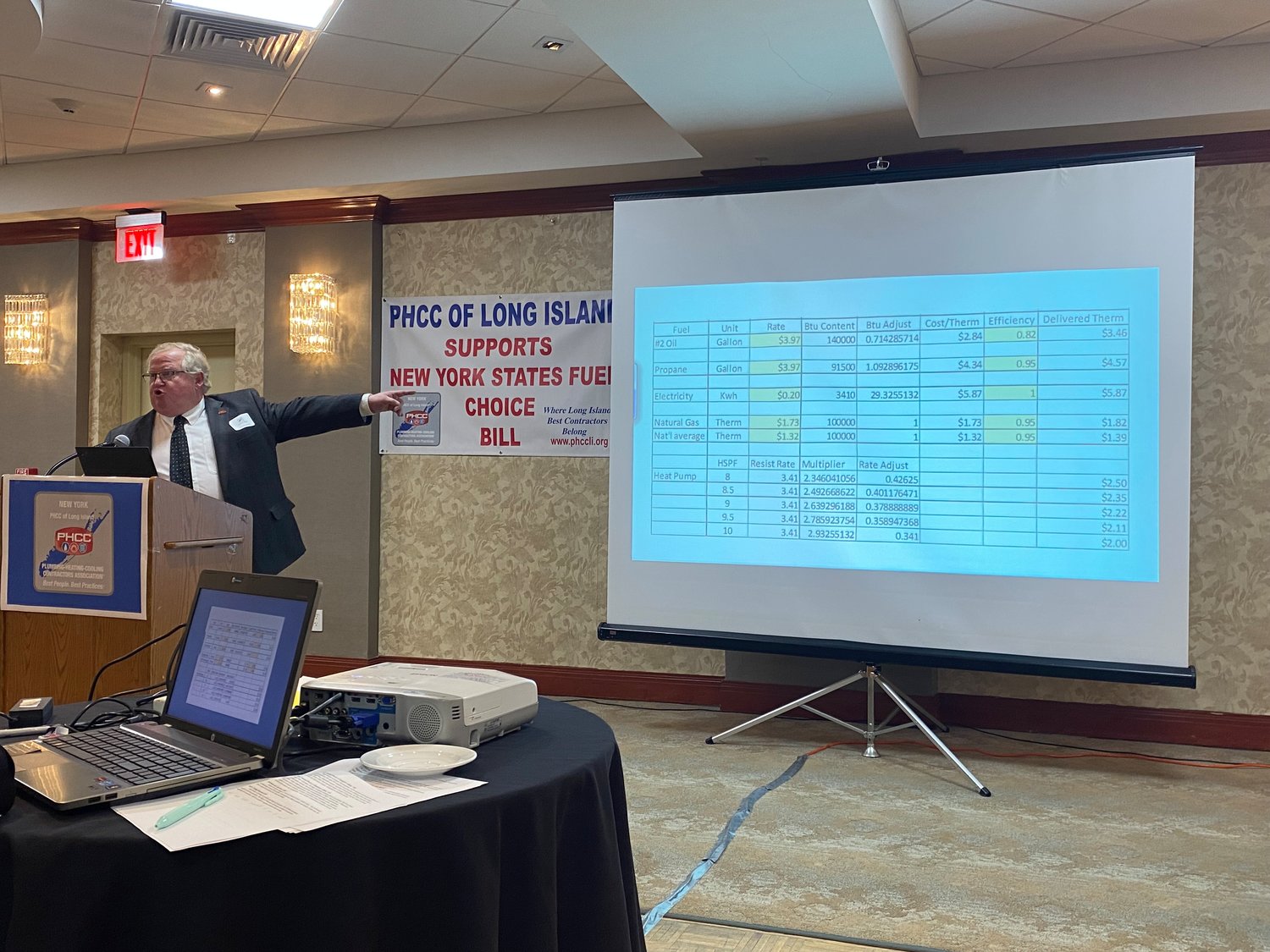 “If the grid gets in trouble, they’re going to have to shut stuff off or it will collapse.””
Chuck White, Vice President of Regulatory Affairs, PHCC National
By Tom Carrozza

A seismic shift in construction could be on the horizon for contractors throughout New York if state lawmakers pass the so-called “all-electric building” acts.

And that has the attention of local plumbing and heating professionals, who could be forced to work without gas as early as 2024. More than a hundred of them crowded into the conference room of the Holiday Inn in Plainview last week to share their concerns with the Plumbing, Heating, and Cooling Contractors of Long Island.

John Cornetta, a former president for the Long Island organization, encouraged the contractors — as well as National Grid representatives, legislative lobbyists and politicians — to instead support S.7467 in the state senate, which he says would prevent local and municipal governments from banning natural gas.

That bill was introduced by Manhattan state senator Brian Kavanagh and Brooklyn Assemblywoman Emily Gallagher introduced the “all-electric” bill with the hopes of decreasing greenhouse gas emissions and air pollution on new construction projects. The bills are intended to ensure no city, town or village could issue new building construction permits powered only by electricity beginning in 2024, outside of rare exceptions. Those exceptions, according to the bill, can’t be based on financial considerations.

Kavanagh’s bill has been in committee since last May, and has been amended twice since then.

Lawmakers passed the Climate Leadership and Community Protection Act in 2019, setting a goal to limit statewide greenhouse emissions to 40 percent of 1990 levels by 2030, and 85 percent by 2050. It was authored by state Sen. Todd Kaminsky, who represents Oceanside and Rockville Centre, among other communities.

“If we do this stuff the way we’re doing it in New York state just trying to do it all on our own, utility rates are going to skyrocket,” he said. “We’re going to put a bunch of labor people out of work, and we’re going to screw up the competitiveness of New York.”

But building emissions “account for a staggering 32 percent” of the state’s greenhouse gas emissions, Kaminsky told the Herald in a statement, “so we must work hard to cut that number.

“I am committed to seeing our state meet its aggressive climate goals. However, we must collaborate with industry representatives on a reasonable timeframe to ensure we achieve those goals.”

National Grid representatives pointed to flaws they see in the Kavanagh bill, but also shared some alternatives to the bill. Don Chahbazpour, the company’s regulatory strategy director, shared a study National Grid released last year that revealed it could take the utility more than 25 years to convert natural gas heating to electricity.

National Grid’s own plan to achieve net-zero carbon emissions and cleaner heating by blending hydrogen produced by solar and wind farms with their gas networks to create biogas. The company has proposed a geothermal energy project in Massachusetts to test the potential for low-carbon heating and cooling.

Chuck White, PHCC’s regulatory affairs national vice president, sees the all-electric legislation as simply impractical. Renewable energies like hydroelectric, wind and solar would have to have to expand quickly if it wants to come close to replacing the what’s generated by fossil fuels.