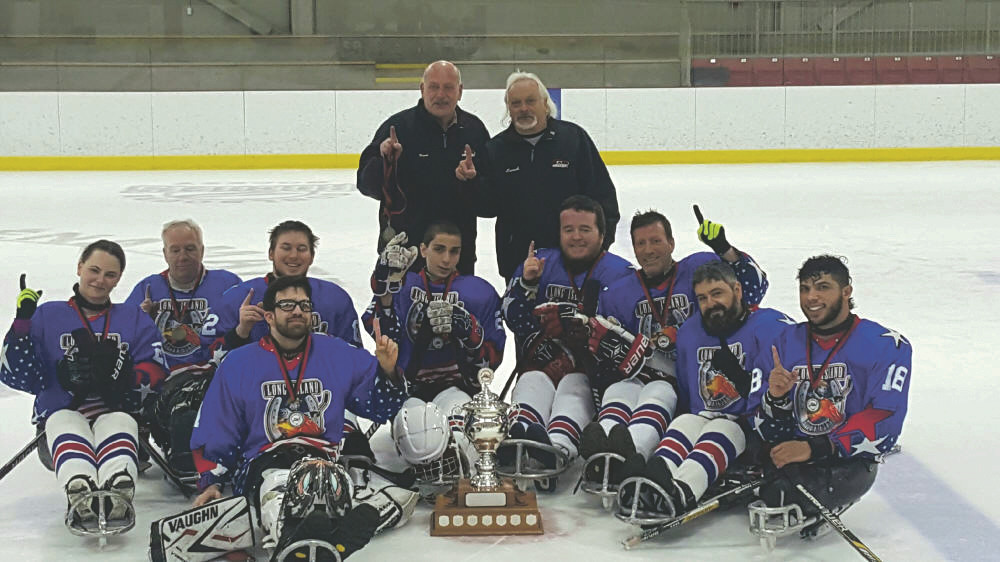 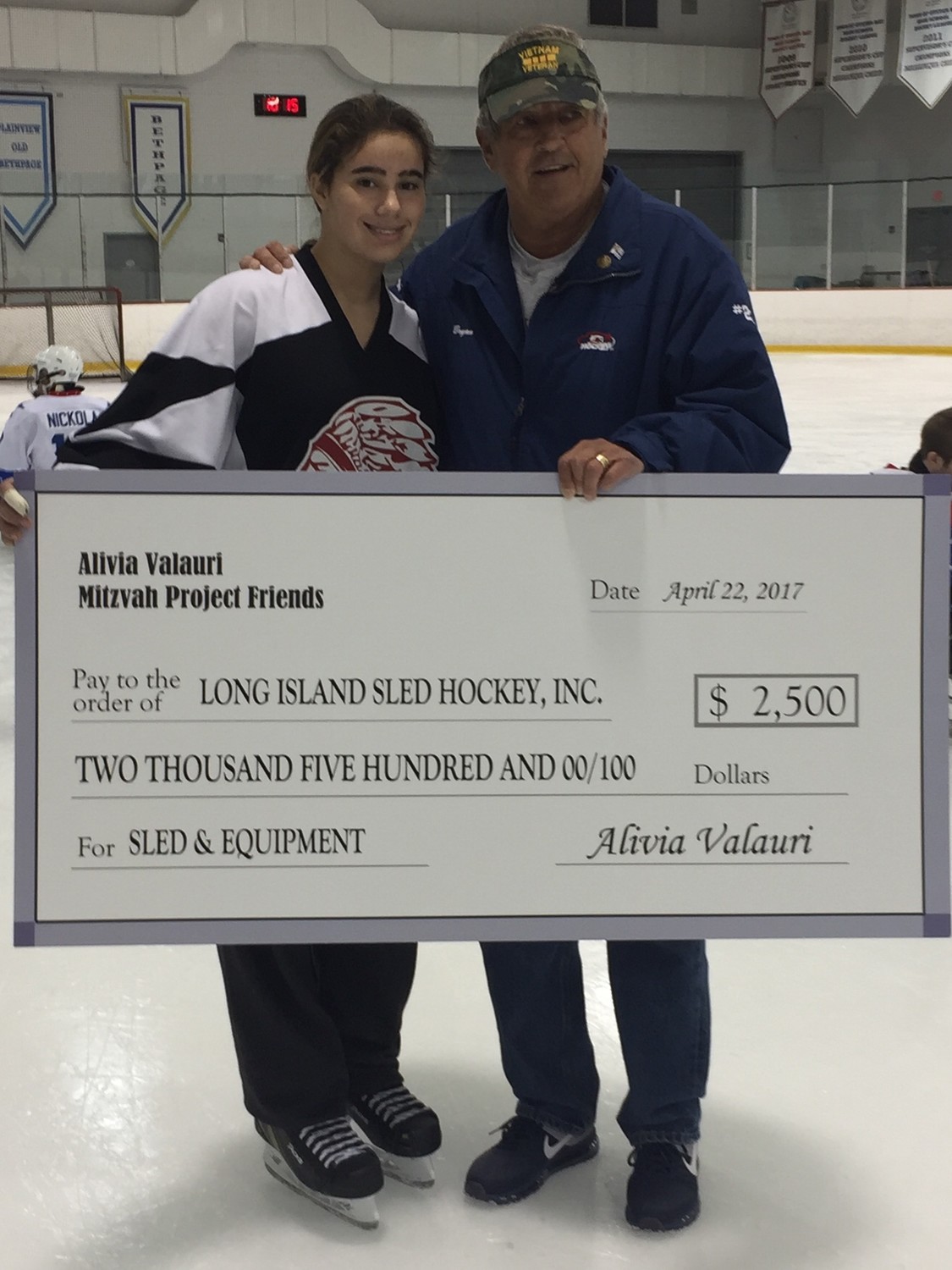 Bryan Blomquist may be retired from the Lynbrook Police Department, but he is still hard at work. He dedicates more than 40 hours a week to raising money for Long Island Sled Hockey Inc., an organization that gives people with disabilities the opportunity to play the sport for free.
Blomquist’s efforts caught the attention of Mike Rowe, who stars in “Dirty Jobs” on the Discovery Channel. Rowe selected Blomquist as one of five people out of 40,000 nominees to be featured on his new show, “Returning the Favor,” which profiles people who go above and beyond for their communities. It was uploaded on Sept. 12, and has more than 2 million views. It can be viewed at http://bit.ly/2wv58kN.
Blomquist said he was inspired to give back to his community because of advice from his late father, Al, who died from colon cancer in 1980.
“He said, ‘Bum’ — that was his affectionate nickname for me — he said, ‘If you ever get a chance to do something for those less fortunate, it’s a good idea, because it makes you feel better and helps a lot of people,”’ Blomquist recalled in between sips of coffee at his house on Harding Avenue in Lynbrook. “I said, ‘OK, Pop,’ and I remembered it.”
Blomquist, 67, a Vietnam veteran and retired LPD lieutenant, doesn’t get paid to run the sled hockey team, the Long Island RoughRiders. He and 10 volunteers help develop players’ skills in sled hockey, a modified version of the sport in which players sit on sleds and use hockey sticks to propel themselves on the ice.


Sled hockey was brought to Long Island by Bill Schwarz, a mentor to Blomquist, who died in 2015. Blomquist discovered the league while looking for a sport that could accommodate his son Brett, who has Down syndrome.
Brett, 32, remains active on the team, which held its first practice of the season on Tuesday and plays through May. The team meets Tuesdays and Saturdays at the Town of Oyster Bay Ice Skating Center in Bethpage. The 51 players have a wide open range of disorders, including muscular dystrophy, cerebral palsy, autism and spina bifida, and some are missing legs. “We measure their success in smiles, not ribbons,” Blomquist said. “In self-confidence and self-esteem, not first, second or third place.”
There is no age limit for the team. Players range from a 9-year-old to a 68-year-old who lost the use of both legs. “I keep him around because he was born in April of ’49 and I was born in November, so I have to have someone older than me,” Blomquist said with a laugh.
On July 28, Rowe surprised Blomquist by setting up a scrimmage between the RoughRiders and the U.S. National Sled Hockey team at Northwell Health Ice Center at Eisenhower Park in East Meadow.
Rowe spent the week before the scrimmage getting to know Blomquist and his players. RoughRiders captain Bryan Genovese said that meeting Rowe was a great experience. “After seeing so many programs, this is really just unique,” said Genovese, 29, who suffers from spina bifida and joined the RoughRiders when he was 8. “Our motto is everyone can play, and that’s what the team has really emphasized over the years.” Genovese is a phys ed teacher in Brooklyn and won a gold medal in sled hockey with the U.S national team in Sweden in 2005.
Before the exhibition, Rowe announced to the audience that he was “returning the favor” to Blomquist by treating him and his wife, Diane, to a trip to Italy, which made them both emotional. They will travel to Venice next September.
“I said, ‘You didn’t have to do this,’” Blomquist recounted of his conversation with Rowe on the ice. “‘You could have just written out a check for Long Island Sled Hockey.’ He looked at me, laughed, and said, ‘You’re f—king relentless.’”
Blomquist’s relentlessness can be seen in how he raises money for the team. He travels across Long Island and into New York City to deliver informational packets to business owners in the hope that they will donate money or prizes for raffles at events. The funds go toward ice time, equipment and to cover travel expenses for out-of-state tournaments.
He does this because when he took over the team in 2003, he told the board he has one rule: Athletes would not pay for anything.
The organization raises money with a golf outing in August and a holiday party in December, but Blomquist said its biggest source of revenue is its annual sock hop in November. Over the past 20 years, Blomquist’s efforts have netted more than $2 million for the program — including $263,000 last year.
Rowe found out about the team after CBS News did a feature on it. When he was first contacted about appearing on “Returning the Favor,” Blomquist agreed, so long as the focus was on his players. He was not initially told about Rowe’s involvement.
After Blomquist conducted a FaceTime interview with the show’s producers and was selected, four vans pulled up outside his home to shoot footage. Then, during a team practice, Rowe appeared and told Blomquist he was behind the show. Blomquist then put Rowe in a sled to give him a first hand experience of how frustrating and physically demanding the sport can be. “The only bleeps in the whole video are his,” Blomquist said.
He said he often puts local police officers, firefighters and high school hockey players into sleds to faceoff against his team in hope that they will appreciate what his players go through. “If the rest of us, the able-bodied, if [we] never look at a child or adult who is differently abled the same way — [we] look at them positively — then this whole experience with Facebook and Mike Rowe was worth it,” Blomquist said.
He added that his father’s advice still motivates him, and he also runs the league because of his admiration for his son. He shared a story about Brett donating the first paycheck he ever received in 2001 to a firehouse that lost 10 members after the 9/11 terrorist attacks.
“My dad was my original hero,” Blomquist said. “Not Mickey Mantle or Joe Namath, but my dad. And my son is my new hero.”
Donations to the league are tax-deductible, and can be made out to Long Island Sled Hockey Inc. and mailed to 33 Harding Ave., Lynbrook, N.Y. 11563. To sign up for the league, visit www.lisledhockey.org.
Report an inappropriate comment