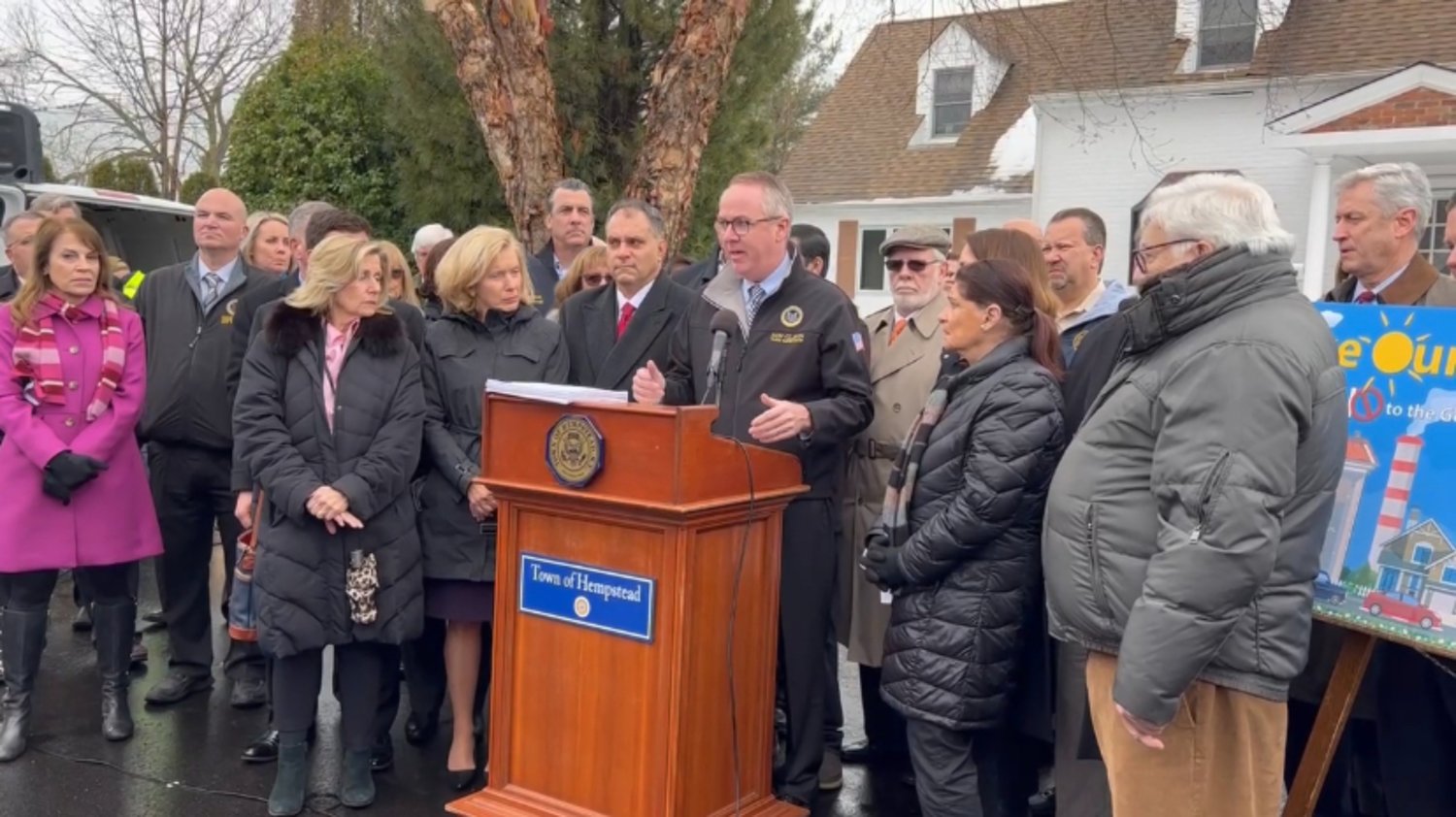 Our population could double in a blink of an eye and the potential for disaster is real.”
Edwin FARE Mayor, Village of Valley Stream
By Mallory Wilson and Karina Kovac

Town of Hempstead and Nassau County officials — and some South Shore residents — are up in arms over a zoning proposal in Gov. Kathy Hochul’s 2022-23 state budget.

Dozens of elected officials gathered outside an East Meadow home on Feb. 3 to voice their opposition to “Section AA” of the proposed spending plan, which would effectively eliminate single-family zoning across the state, allowing single-family homes to be turned into Accessory Dwelling Units or apartments by converting basements, garages and attics into separate dwellings.

At last week’s news conference, officials detailed what they saw as the potentially negative impacts of the proposal: an increase in traffic, a strain on resources and infrastructure, and overcrowding in public schools.

The officials called on residents to contact Hochul’s office and make their objections clear. A Feb. 4 letter to the governor signed by the Hempstead Town Board requested that she remove the provision from the spending plan.

“We do not need New York State meddling in the local zoning affairs of the Town of Hempstead, or any community within Nassau County,” the letter reads. “Our town Building Department, Board of Appeals and Town Board — working with other municipal departments — have enforced local building codes and zoning laws for generations.”

Town Councilman Chris Carini, whose district includes parts of Wantagh and Seaford, said in a statement that the proposal would “destroy” residents’ suburban way of life. “The Governor and Albany leadership are hiding this legislation in the budget, just like what was done with bail reform,” Carini wrote. “This proposal is nothing short of a smash and grab to gain control of local zoning laws. We must not allow the Governor to force her will on our local zoning! Local issues should be decided locally!”

Hempstead Town Supervisor Don Clavin said at the news conference said the provision was “sneaky” and  “a true attack on suburbia.” “The governor is attempting to basically mandatorily require anybody who wants it to put an accessory unit on their house,” Clavin said. “. . . We are not standing for it.”

County Legislator Steve Rhoads, who represents portions of Wantagh and Seaford, expressed similar sentiments. Hochul’s proposal, Rhoads said, was subtlety written into the budget, making it difficult to remove unless the entire spending plan is rejected.

late that throughout the entirety of the county, where every single-family home can now be a two-family home. Imagine how congested everything will become.”

Village of Valley Stream Mayor Edwin Fare joined local leaders in their opposition against the provision. “By allowing an explosion of additional housing in our village, the state would put Valley Stream at enormous risk for fire and public safety emergencies. Our population could double in a blink of an eye and the potential for disaster is very real,” said Fare.

The mayor also touched upon how the zoning change could place extra stress on the various departments throughout the village: “[The zoning change] places an added burden on our fire and public safety departments.  We also have to consider the strain on sanitation, traffic, utilities, sewer systems, infrastructure, and our very fragile environmental ecosystem, not to mention the overwhelming impact on our already stressed school systems. Congested on-street parking will be a nightmare. I urge everyone to immediately reach out to the governor and your state representatives to express your opposition to this attack on our suburban way of life here in Valley Stream.”

Lawrence Levy, dean of Hofstra’s National Center for Suburban Studies, said the provision could help solve the region’s affordable-housing crisis. “It’s easy to understand why the folks running the county, towns and villages don’t want Albany telling them what to do,” Levy said, “but the potential law reflects the frustration [of] advocates for more and better affordable housing. This could be one of the solutions to the lack of affordable places to live, and an opportunity for homeowners to get a little more revenue to defray the high cost of property taxes.”