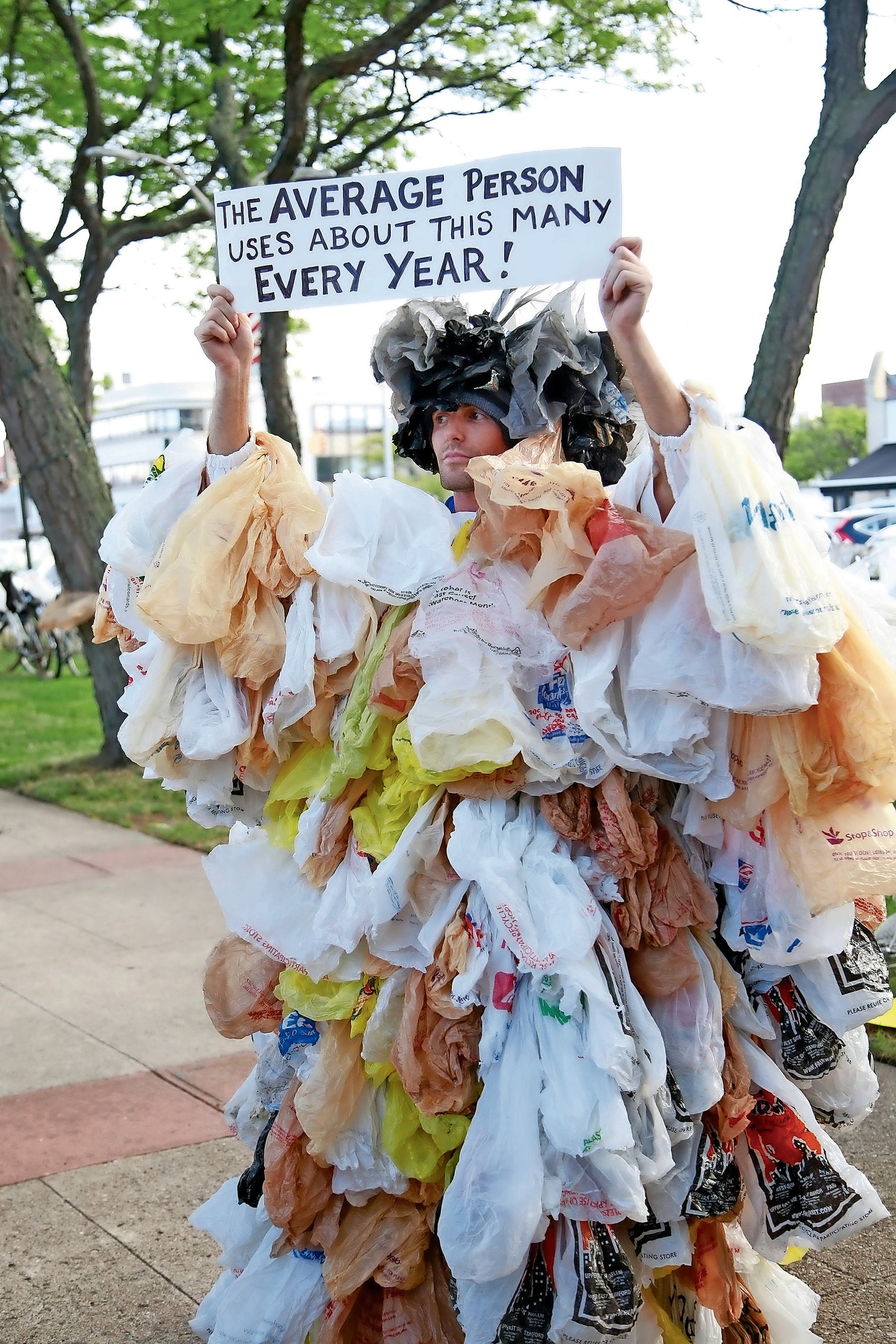 Long Beach businesses will be required to charge at least 5 cents for each carryout bag that shoppers use beginning April 22, thanks to an ordinance approved unanimously by the City Council last year, aimed at reducing the negative environmental and economic impacts of single-use plastic and paper bags.

Following a seven-month public education effort, the roll-out of the new law will coincide with a number of Earth Day events, including a parade on the boardwalk, that the city is hosting in part to raise awareness of the measure and to encourage shoppers to pick up, and use, free reusable bags.

The city, the Chamber of Commerce, schools and local environmental organizations have been reaching out to residents and businesses, and launched initiatives to create reusable bags. In February, the city held an informational session with businesses owners at Bridgeworks to discuss the new law.

“We’ve gone out to the various community centers and met with various organizations, including neighborhood civics, and talked about the bag ordinance and what they can expect and how to prepare themselves,” said Ryan McTiernan, executive assistant to City Manager Jack Schnirman. “Every time I met some kind of resistance, or whether it was clarification of the law, they kind of understand the intent of the law and are supportive of it.”

The push to limit single-use bags began in 2015, when the city’s Environmental Advisory Board recommended educating the public on plastic-bag pollution, which included organizing free screenings of the documentary “Bag It” around Long Beach. Thousands of residents signed a petition and held rallies supporting the measure before it was approved by the City Council last year.

Long Beach is the first municipality in Nassau County to implement such a fee.Plastic and paper bag waste contributes to, and hinders the ability to protect against, climate change and rising sea levels, officials said, adding that it is also a quality-of-life issue, because bags not only blow around the city and into trees, but also block storm drains and exacerbate flooding.

Members of All Our Energy’s Bring Your Own Bag campaign, Stewards of the Sea and the Surfrider Foundation have estimated that 11 million plastic bags are used in Long Beach each year, but only about 10 to 15 percent are recycled. Last year, 10,000 bags were plucked out of Reynolds Channel. Under the new legislation, city officials said, they expect to see a 75 percent reduction in the use of plastic bags over the next three years.

“Every thousand reusable bags eliminate one billion single-use plastic bags off the streets,” said resident George Povall, director of All Our Energy and a member of the Bring Your Own Bag campaign. “Seaside communities are first to see effects of plastic pollution.”

Local stores will keep the bag fees they collect to recoup the cost of those bags and to provide reusable bags for customers. Businesses that violate the ordinance could be fined $100 to $250. The fee will also be collected for bags used at city-run facilities, city-sponsored events and any other events held in Long Beach.

“I am sure people will have to get used to the idea — but I am sure it will have its intended effects,” City Council Vice President Anthony Eramo said. “The intended effect of the new legislation is not to collect nickels and dimes; it is to change people’s habits on plastic.”

The fee does not apply to bags without handles that are used to carry produce, meat, loose baked goods, dry-cleaning, newspapers, liquor, flowers or other non-prepackaged food items, or those provided by a doctor, pharmacist or veterinarian for prescription drugs.

“Five Guys asked if their French fries were exempt because they put them in a paper bag — which it is,” McTiernan said. “A primary container for food is exempt.”

Some people have raised concerns about how the ordinance will work, and raised issues that could create confusion for both business owners and customers. “There still seems to be confusion among the business owners over who this applies to and who it doesn’t,” said John Bendo, president of the West End Neighbors Civic Association.

Sean Sullivan, owner of Beach Local Café on the boardwalk, said he was concerned about how customers would react to the fee, especially when it comes to takeout and delivery orders, or if businesses choose to charge more than 5 cents for the bags.

“We want the environment to be clean, but my issue isn’t with trying to cut down on plastic bags,” Sullivan said. “My issue is with the method of going about it. For me, it creates a forced, awkward conversation where now I have to explain a platform that I don’t believe in. If you just put it on the check, you’re going to have angry people calling you back.”

McTiernan said that businesses would be required to post signs at points of sale, and may devise alternatives for food delivery, such as cardboard boxes or insulated delivery bags. “It’s meant to be a conversation starter with their customers,” he said. “It’s to get people to bring their own bags but, obviously, businesses and customers will have to adjust to a culture change.”

Ben Strack contributed to this story.
Report an inappropriate comment