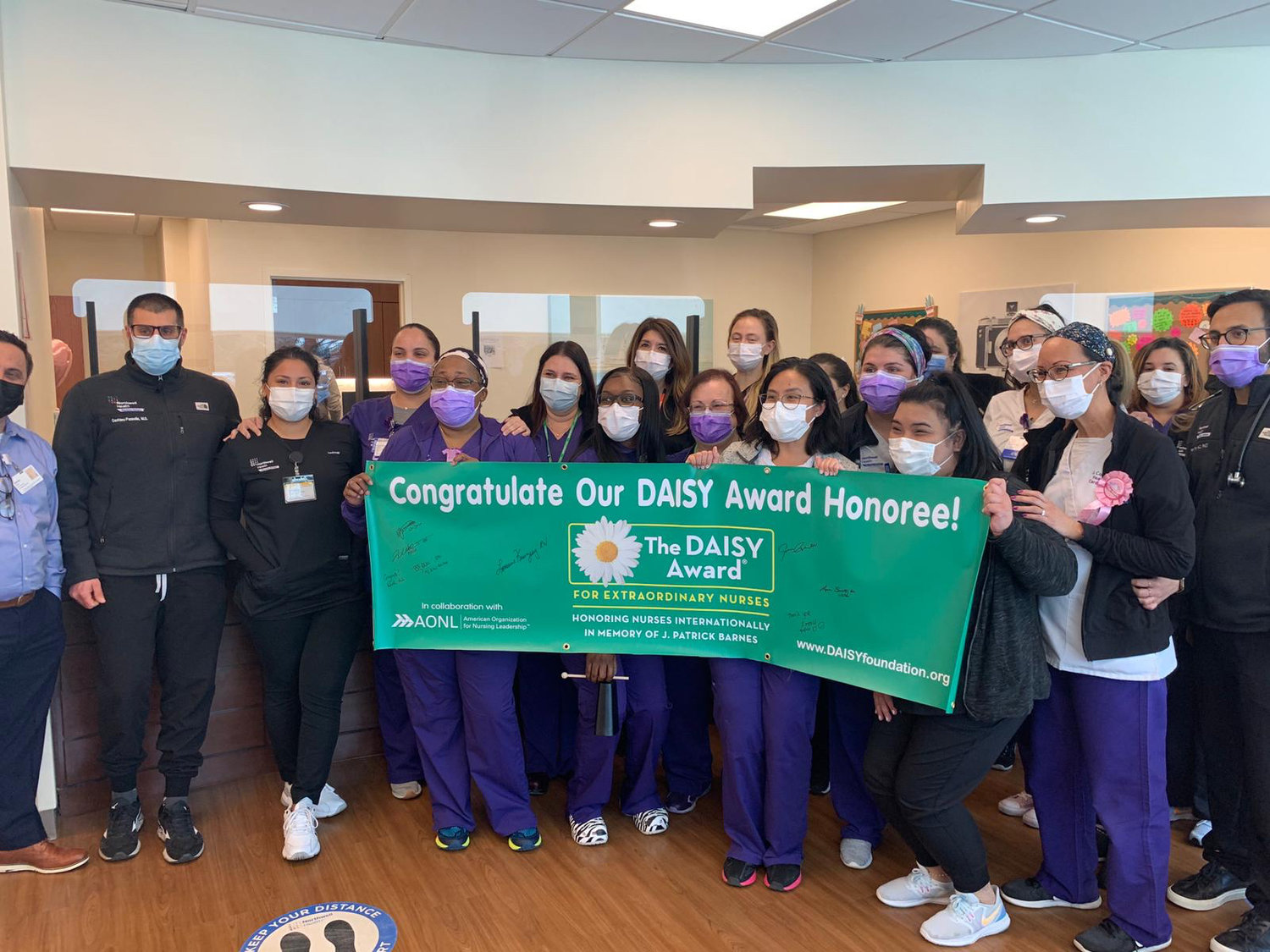 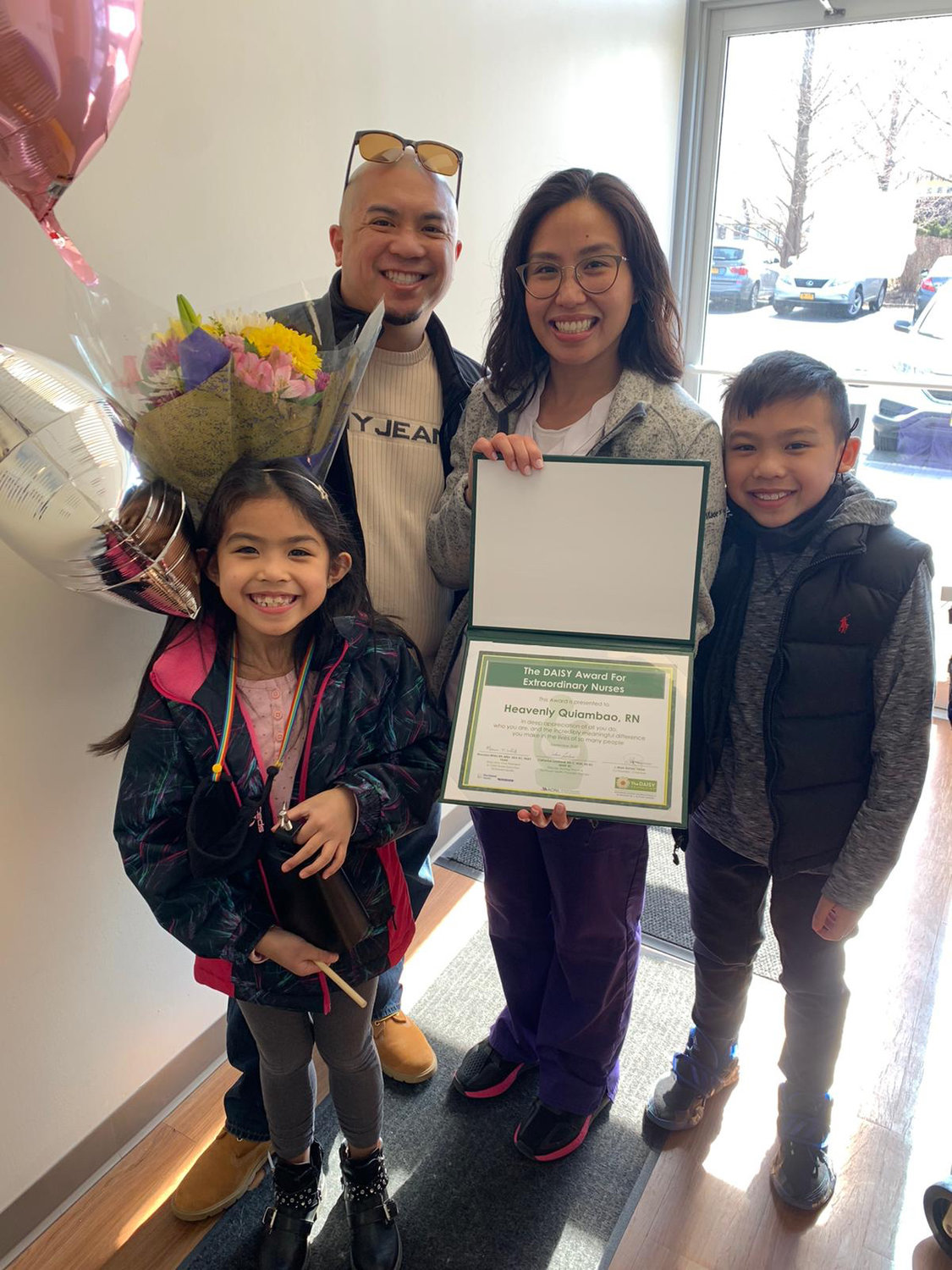 As a young woman, Heavenly Quiambao saw her mother, Eleonora Pilar, work long, tiring hours as a nurse. She did not see herself entering the profession.

But nursing was in her bloodline, and she followed the path her mother and other relatives had taken. Now, after more than a decade in the field, including time working in an ICU, Quiambao has achieved a milestone in her chosen career: she has received 15 nominations for The DAISY Award for Extraordinary Nurses. Only 10 nurses a year receive such an award.

“That’s the Filipino culture,” Quiambao said of her decision to become a nurse. “We’re natural caretakers and I think that’s why so many of us become nurses, so I treat everyone like family.”

When Carol Henck, a former nurse at Long Beach High School, took her on a field trip to the former Long Beach Medical Center back in 2000, Quiambao fully understood she wanted to continue the family lineage of nurses.

After shadowing different health professionals she saw that there was more to the profession than she once assumed. Her mother was a home care nurse, who devoted much of her time to her patients.

After graduating from Adelphi University in 2008, Quiambao became a registered nurse at the cardiac intensive care unit at North Shore University Hospital in Manhasset. After several years there, she moved on to become a Nursing Supervisor at Northwell Health Cardiology Consultants.

During one of the most difficult years for healthcare professionals, Quiambao rose to the challenge. At the height of the pandemic and after losing her nursing manager to maternity leave, doctors and other staff members were redeployed to assist at other hospitals. Five out of the seven doctors were transferred to hospitals, leaving Quiambao and the rest of her colleagues to pick up the slack.

“The hardest part was that we were getting so many phone calls and we wanted to help everyone, but we just didn’t have enough staff,” Quiambao said with regret in her voice “That’s what I find so fascinating about ambulatory care, we do so much with so little.”

The nursing staff was tasked with finding the proper care for their patients, some of who were discharged from hospitals. Since she had prior experience working in an ICU, she was an obvious candidate to be transferred to assist at a hospital. After getting the call, however, Quiambao explained that she couldn’t leave her understaffed team.

“The heartache I felt because I worked in the ICU for nine years,” Quiambao said. “Now I see my friends posting on Facebook and Instagram… and literally experience death minute after minute. My gut was wretched because I wanted to help them.”

After seeing her old colleagues suffering, she called her former nurse manager at the ICU and told him that she would return to the ICU to help, but just needed a little more time. When the staffing situation got better, she prepared to redeploy, but at the end of April, the hospitals already received reinforcements from other states and didn’t require her help anymore.

However, at the office, she faced a different task. One of her main responsibilities was running a blood thinner clinic. While keeping the safety of her staff and patients in mind, Quiambao created a drive-up warfarin clinic where she would see patients outside instead of in the office. She may not always have the answers right away, she admitted, but her motto and the motto of her staff is simply “we’ll figure it out.”

While wearing full personal protective equipment, they pushed out a cart and treated patients in the parking lot.

Throughout her time working during the pandemic, one thing was always on her mind — her family. For about three months, she didn’t see her parents. When she would get home, she would immediately take off her work clothes, jump in the shower and scrub away with scalding hot water.

Though she loved her profession and helping people, she just couldn’t stand the thought of endangering her loved ones.

“When my kids would see me, right after work, the first thing they wanted to do was hug and kiss me,’ Quiambao said as her voice cracked with emotion. “I would tell them I can’t.”

During this period, Quiambao noticed that many people were putting off their routine care and when things were slowly getting better they returned. One day in December, a patient was waiting outside in his car for his appointment, when his wife walked in the office and told the nurses that her husband was not looking particularly well. When the nurses arrived at the vehicle, they found him slumped over and unconscious.

Immediately Quiambao and her team inserted an IV, started chest compression and even shocked the man before the ambulance picked him up. They later found out that the man had a heart attack and because of their quick actions, he lived and was later discharged in time for Christmas.

This moment and many others were the reason why Quiambao received 15 nominations for The DAISY Award for Extraordinary Nurses.

The award was created in honor of Patrick Barnes, who at 33 years old, was diagnosed with the auto-immune disease, Idiopathic Thrombocytopenic Purpura, which causes the blood not to clot normally in the body. During his stay at the hospital, his family was so impressed with the care the nurses and staff gave them and Barnes, that shortly after Barnes’s death, they created an award to recognize the skills, compassion and leadership nurses display every day.

“She goes above and beyond in everything she does,” Josephina Espinal, Quiambao’s nursing manager and friend, said. Adding that during the pandemic, she held the practice together, as many staff members were redeployed. Espinal, who was one of the 15 nominations, said that Heavenly does justice to her name every day with her extraordinary work and compassion for patients.

Quiambao, 38, walked in to work one day prepared to celebrate a colleague’s birthday. As she was putting balloons up on her friend’s desk and doing other work around the office, Espinal slyly pulled her into the waiting room with the pretext that one of the doctors needed her help. She entered the waiting room and noticed her family, colleagues, and patients all waiting for her.

The moment, Quiambao recalled, was one of the best of her life.

“This is the highest honor I’ve ever received,” Quiambao said, “This is the pinnacle of my career.” She praised her family, colleagues and patients for their support. However, the person who caught her attention the most was her father. Throughout her youth, she remembered, her father working two jobs as a computer programmer to give her family a better life. He has trouble making it to family events because of work, but that day, when she received the biggest award of her career, he was there.

Ironically, her mother, who has about 45 years as a nurse, was working that day.

Quiambao graduated from Long Beach High School in 2000 and now lives in Baldwin, with her husband Joe and kids Joseph and Ella, who attend school in Oceanside. Her husband, who has supported her throughout her years in college and now as a nurse, praised her work ethic and added that his family is blessed to have her.

“It gives me a lot of pride that she’s my wife,” Joe said. “She wants to be the best at what she does, whether it’s at being a mom, or a wife, or a nurse.”