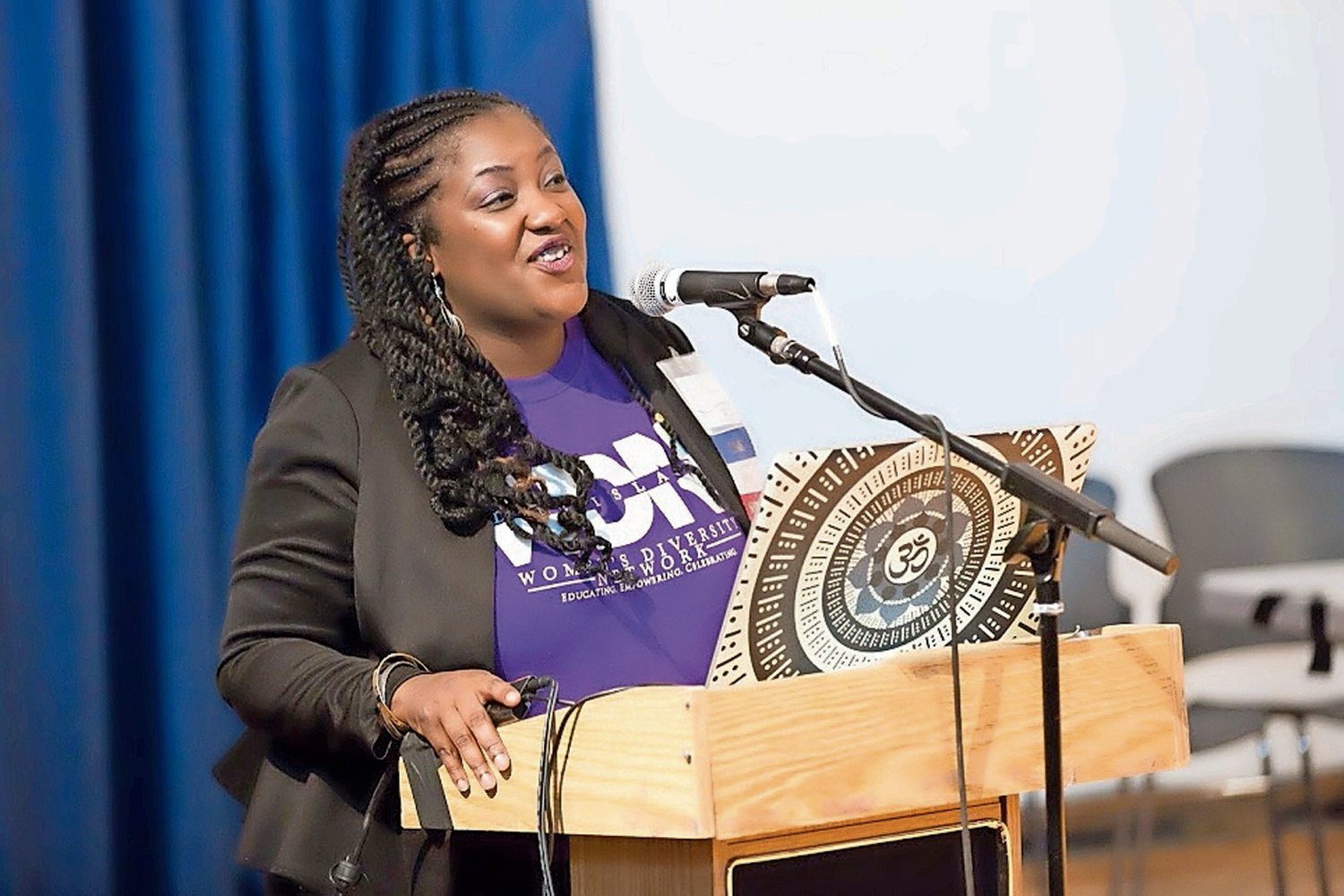 Shanequa Levin, 40, of Huntington Station, is the founder of Women’s Diversity Network, a group that advocates for the racial and cultural integration of systems.
Courtesy Paparoxxi Event Photography
Get Involved

There are several organizations mentioned in this article to get involved with and help bridge the gaps created by structural racism. To learn more, visit bit.ly/racismaroundus.

As a stay-at-home mother in 2006, Shanequa Levin, of Huntington Station, was feeling stir-crazy.

She had two children — ages 4 and 8 at the time — and had just moved to the town in 2003. She had her first child at 19 years old and left college to take care of him. Having grown up in Glen Cove with parents who were addicted to drugs, she still felt a tinge of shame about her family history and how it affected her. She was quiet and insecure, unsure where life would lead her next.

Her husband encouraged her to get out of the house and find a community. So she went to a Mother’s Center meeting at her local library, and it became her escape. There, she spoke about daily challenges and related with other moms. Since she didn’t know any other mothers in the area yet, this was big. She was the youngest mother and only black woman in the group of about 15, but connecting on the stresses and joys of motherhood transcended race, she recalled.

Levin returned every week for about six weeks. The structured discussions were a release for her. But after each session, the other women would gravitate toward one another to mingle — and away from her.

When the facilitator announced she was leaving and needed one of them to take over, Levin saw the departure as an opportunity. She was the only woman to raise her hand and volunteer, she said, but the leader waited until the next session. That session came, and Levin volunteered again. She was brushed off again, and again the next time, too.

“That’s when I realize, ‘Oh my gosh! She is not taking me seriously or does not want me to lead,’” Levin recalled. “And automatically I go to, ‘It has to be my color, my age … like, what the hell is going on here?’”

At the end of the final meeting, Levin confronted the group leader. She was still the only one offering to take over, so the woman handed it off to her. Levin noted that the implicit bias she faced stemmed from Mother’s Center being a decades-old organization that predominantly catered to middle-aged, white women. As the new leader of this particular chapter, she intended to change that.

“I vowed to myself that I will be one of the faces for black people as a whole,” Levin said. “I vowed to be that voice in spaces where we are not and show people what our potential is.

“I made that Mother’s Center one of the model centers for the whole organization, to the point where they end up hiring me to charter new Mother’s Centers,” she continued. “So that’s how I got a taste for my advocacy, first advocating for myself and then, advocating for the needs of moms.”

Eventually, the national Mother’s Center organization closed. However, Levin started Mocha Moms of L.I. to keep mothers like her in touch with one another. Levin also went on to work for Every Child Matters for nine years before the organization closed its New York chapter in 2017.

Meanwhile, in 2016, she created the Women’s Diversity Network, a grassroots organization that advocates in the areas of health equity, gender violence, racial bias and systemic racism.

Like Levin, there are many people on Long Island who have realized the structural racism around them and dedicated themselves to creating change by getting involved or starting their own organizations.

These groups — including ERASE Racism, Long Island chapters of the NAACP and NYCLU, Urban League of Long Island, S.T.R.O.N.G. Youth and more — work on several levels to engage the community on the topic of structural racism. Those levels are education, advocacy, research and direct services. They commit to this work not only to help level the playing field for minorities, but to make Long Island a better and more whole and place to live, many advocates argue.

When Sergio Argueta first founded S.T.R.O.N.G. Youth in 2000, he knew first-hand the tragedy and destruction that gang violence could cause. He was involved in a gang as a teenager in Hempstead, but left after a string of deaths woke him up to how he really wanted to live his life. He also knew the high risks they face of joining gangs on Long Island.

So he started S.T.R.O.N.G., a group of about four people then in their 20s, which focused on community organizing and activism to curb youth violence and gang involvement. They spoke out on the issues to make communities aware that, yes, gangs are a problem on Long Island.

“Gangs meet certain needs that the institutions that are meant to provide for kids had failed at,” Argueta explained. “So we said, ‘We need to advocate for change and we are going to create that change in ourselves.’”

The group did — and still does — speaking engagements to reach kids, as well as professional trainings with schools, police departments  and juvenile detention centers. They talk about both preventive and intervention measures to help teens stay on the right path.

At the time, they also advocated for policies like “Raise the Age,” which would keep 16- and 17-year-olds in the juvenile criminal justice system, rather than send them to adult prisons and jails, Argueta recalled. However, the issue of incarcerated youth and youth violence is complicated, and the group’s strategies changed over time.

“We understood that there was a need, and we were going to have to move into the direct service sphere,” said Rahsmia Zatar, executive director of S.T.R.O.N.G.

Since Zatar took over in 2011, the organization has increased the direct services it brings to young people who are either gang-involved or at risk of becoming gang-involved. The group of about 20 staffers — some full-time and some part-time — provide counseling, case management and mentoring to youth.

At the same time, “we’ve never stopped being a voice for these issues,” Zatar said.

“Now the focus is bringing back some of that grassroots flavor that got us to be where we are in the first place,” Argueta said, “and it’s the young people that are leading that charge.”

Advocacy group leaders across Long Island have noticed this resurgence in activism in the region as a whole, as well, which could be due to more education on the issue. “People are becoming aware again,” said Theresa Sanders, president of Urban League of Long Island. “I’ve recently partnered with groups I’ve never worked with before.”

Sanders has worked at Urban League for about 40 years, leading the Long Island chapter for more than 20 of those years. As an affiliate of the National Urban League, the organization empowers communities of color by offering job training, college preparation programs and other economic opportunities.

The Equity Council released a comprehensive, 125-page report in 2017 called the State of Black L.I. Equity Profile. It details the income inequality that persists in the region and concludes that Long Island’s economy could grow by $24 billion is racial income gaps were eliminated.

Susan Gottehrer-Cohen, a white woman, said she got into activism as she learned about institutional racism while earning her master’s degrees at NYU and Columbia. At the same time, she a felt a calling to give a voice to the oppressed.

Now she advocates for disadvantaged communities in law and politics as president of the Nassau County chapter of New York Civil Liberties Union, or NYCLU, a local arm of the ACLU.

NYCLU advocates for legislation that it believes would help eliminate economic disparities in communities of color. The organization has a strong focus on holding institutions accountable and often partners with other groups, such as NY Communities for Change, to hold rallies and make noise around certain issues.

“What would government be doing if the activists weren’t out there?” Gottehrer-Cohen asked rhetorically. “The answer is really quite sad. The hours that advocates put in and the level of emotional intensity they bring to their jobs is unbelievable. They’re tireless.”

Levin created Women’s Diversity Network because she wanted people of different races working together, not just within their own niches, she said. It began as the Women’s Diversity Summit, a daylong event bringing together people of different cultures for panels and workshops about diversity in the workplace and daily lives. The event also included a multicultural lunch.

Women’s Diversity Network has grown to a group of about 30 representatives dispersed across Long Island leading trainings, planning events and advocating. When they see something wrong, they try to talk about it. For example, they held a session called “What’s Up With the N-Word?” with adolescents to teach about why using the racial slur promotes bias.

“When you make changes for the oppressed, it benefits everyone,” Levin said. “It doesn’t benefit our country to have groups still being marginalized. We, as a country, will never be able to see individuals truly be successful in their lives and support their families if we don’t integrate our systems.”