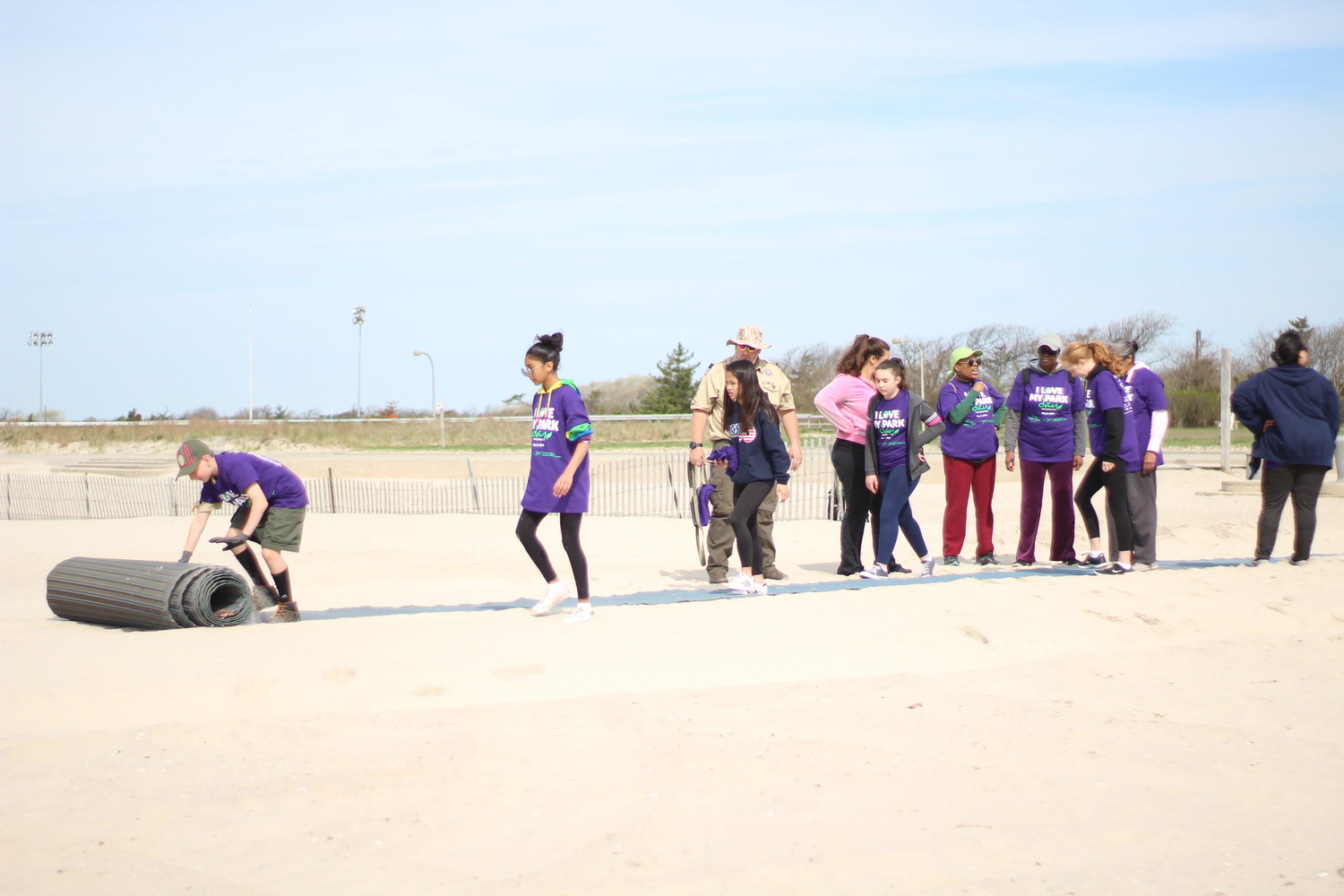 Volunteers at Jones Beach Park rolled out beach access mats, which are used to help disabled beachgoers get closer to the shoreline, as a part of I Love My Park Day.
James Mattone/Herald 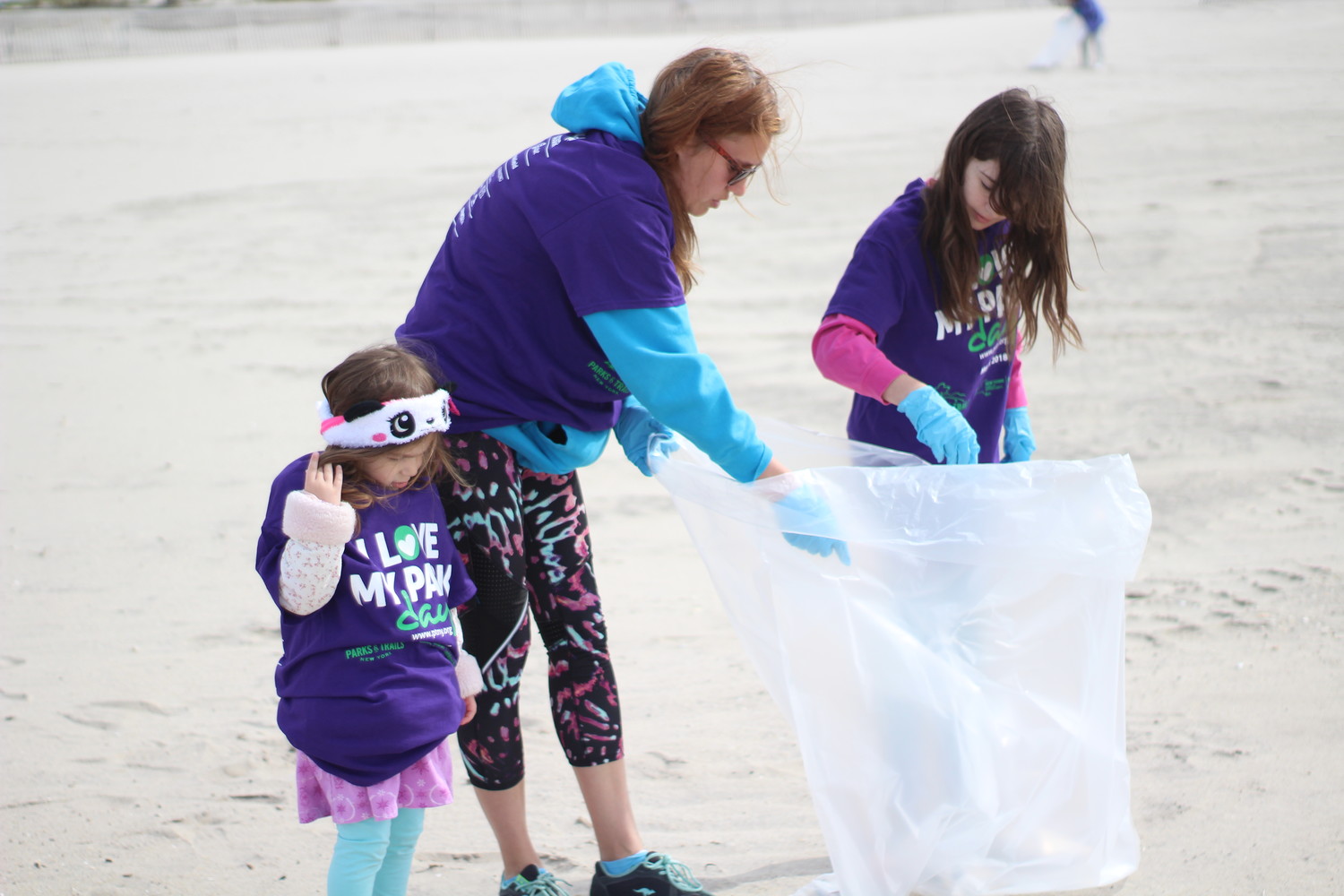 Cathy Kassimatis, of Wantagh, helps her 10-year-old daughter Emily pick up litter at Jones Beach while her other daughter Jeana, 3, looks for more trash.
James Mattone/Herald 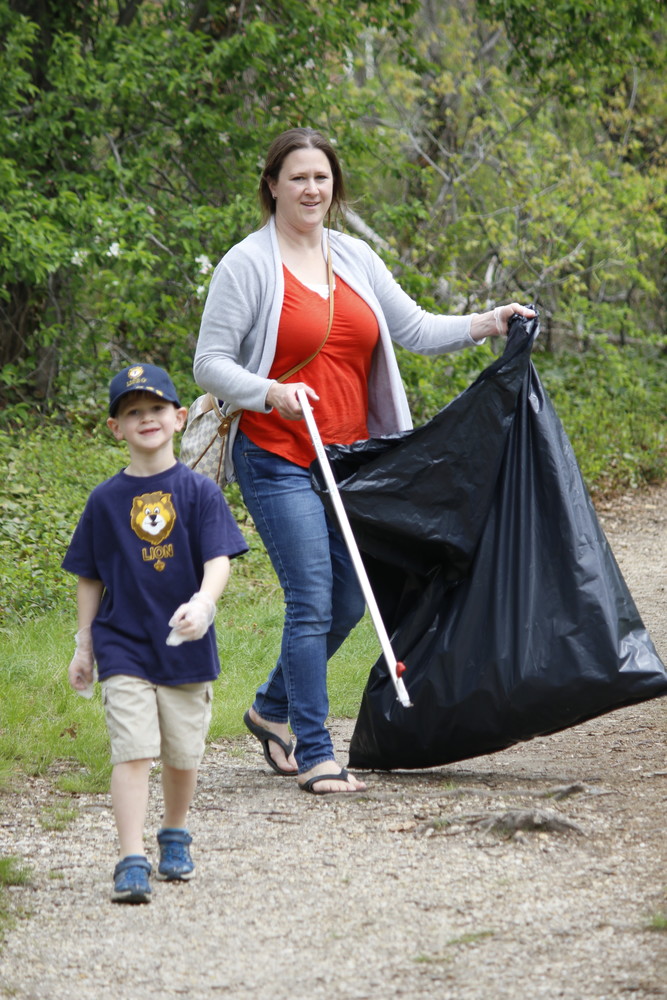 Lion Scout Nicholas Pellegrino, of Wantagh, wanted to stay and clean up every last path of Twin Lakes Preserve. His mother, Kate, assured him that they can come back whenever he wants to pick up trash.
Christine Daly/Herald 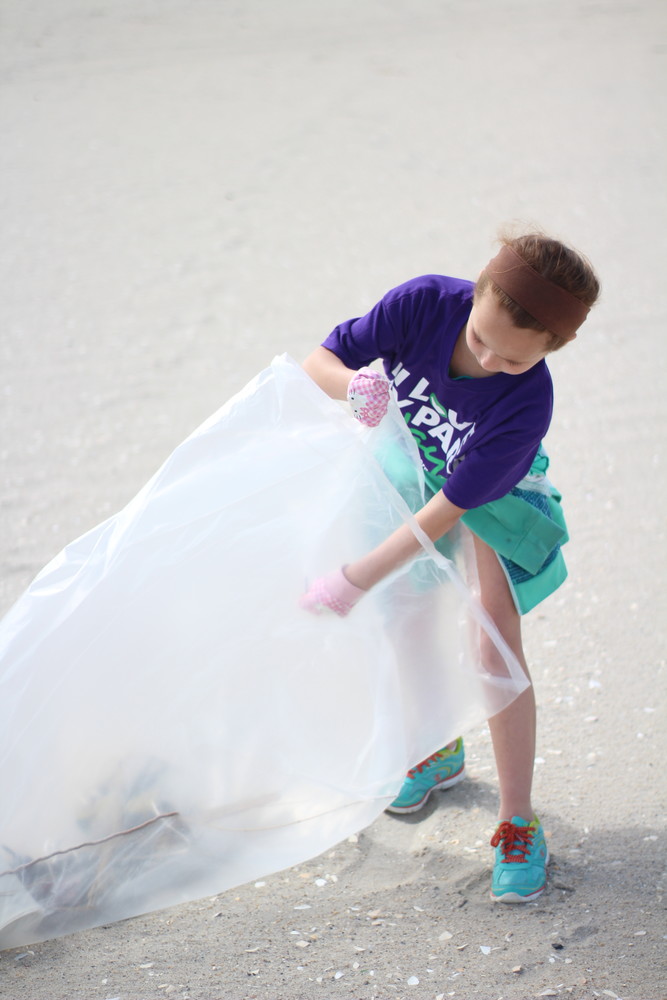 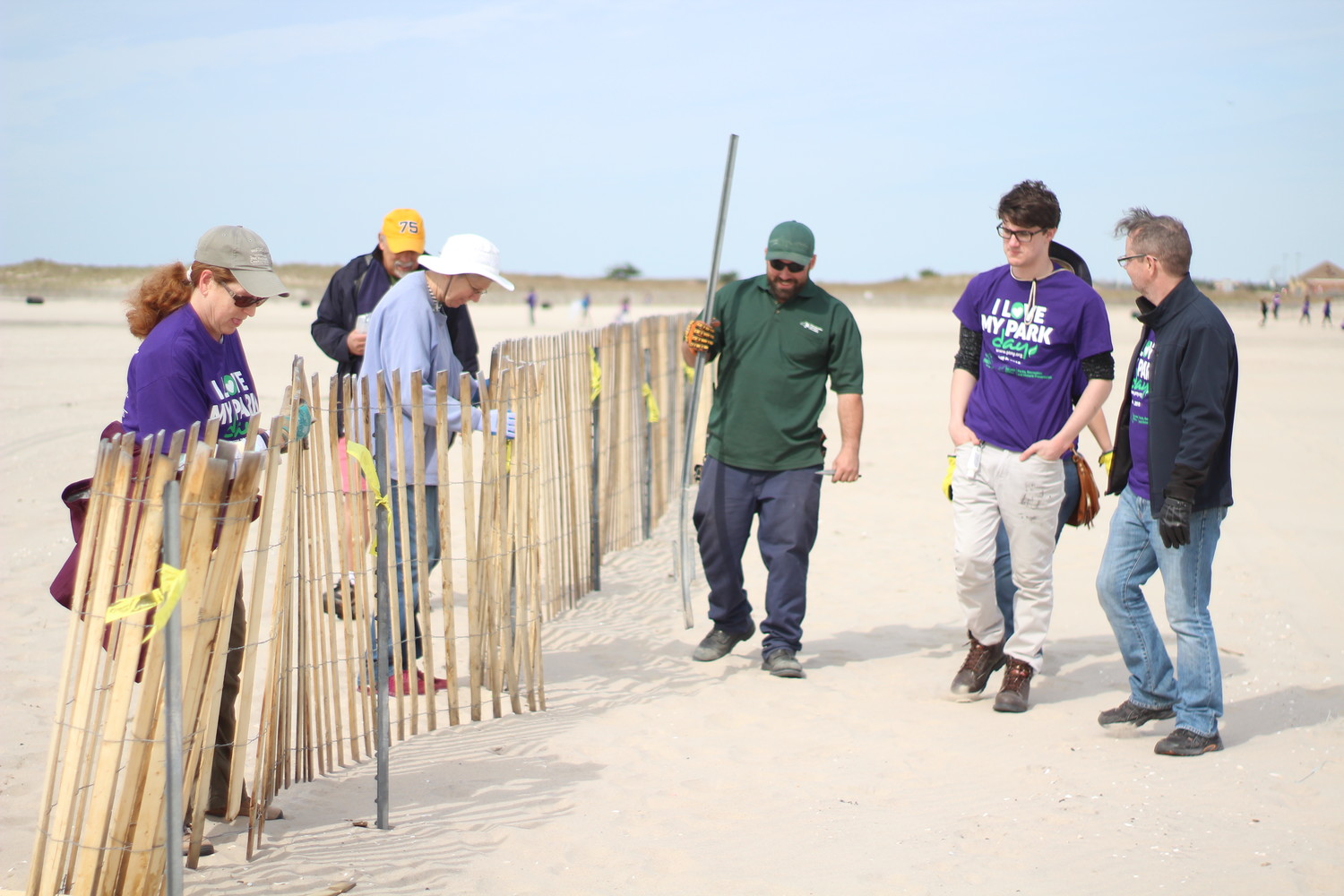 Jones Beach State Park supervisors and volunteers set up snow fencing, which is used to make sand dunes and creates an emergency lane for the upcoming air show.
James Mattone/Herald 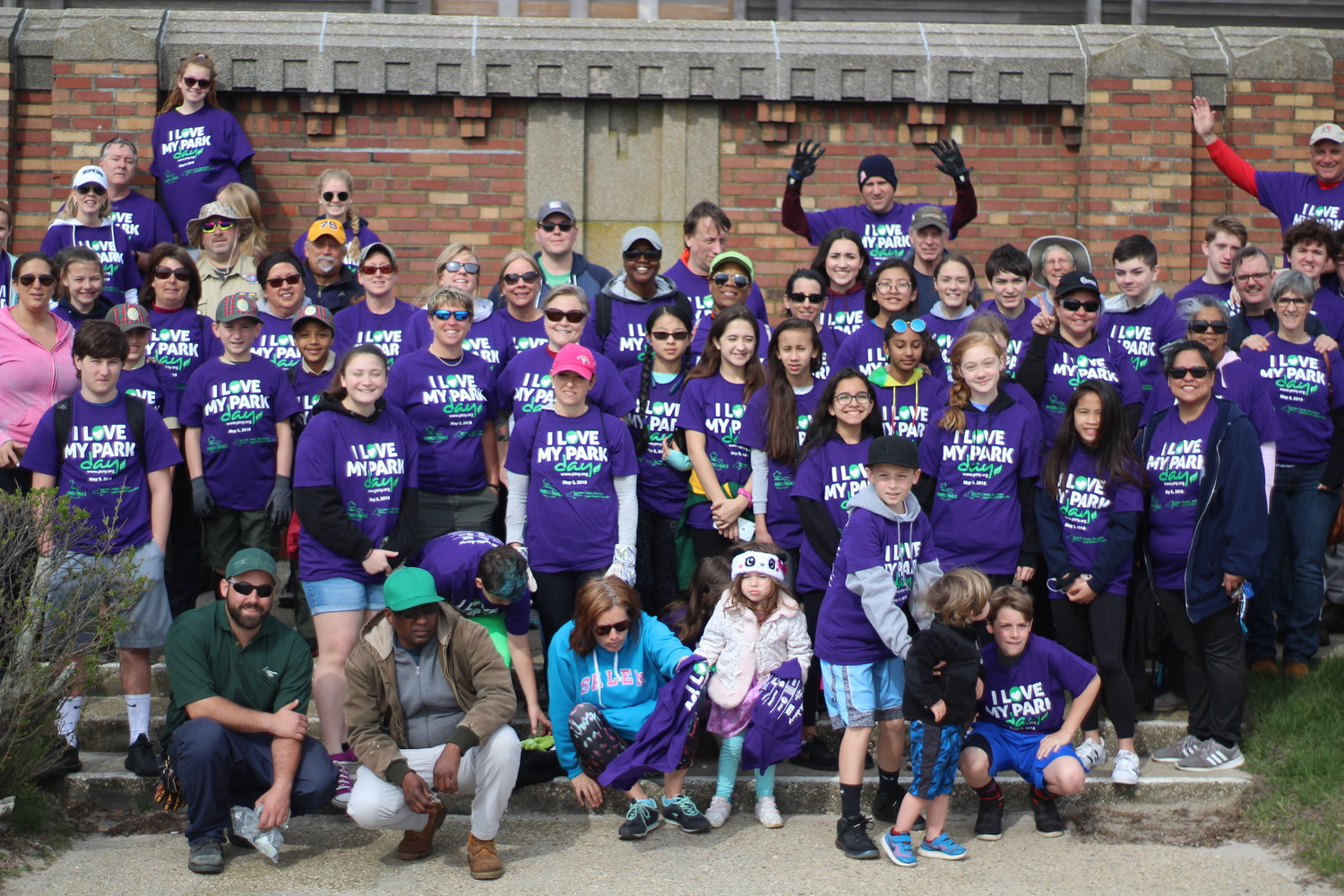 About 200 Long Islanders helped beautify and prepare Jones Beach State Park and the Wantagh Twin Lakes Preserve for the summer season as part of the seventh annual I Love My Park Day.
James Mattone/Herald
Previous Next
Why did you volunteer for I Love My Parks Day?

- “I recently went to New Orleans with [Molloy College’s] Service Learning Group, and when I got back, I said that I really needed to do more volunteer work” – Cori Miller, Baldwin, Director of Technology Services at Molloy College.

- “I think it’s good for the park and it’s good for any reason because I want my park to be clean and want it to look nice for other people to see.” – Emily Kassimatis, 10-year-old Wantagh Girl Scout in Troop 3566.

- “I’m cleaning this beach so that animals would be in a safer environment and wouldn’t die early because they are eating plastic,” Alexandria Cassar, 13-year-old Wantagh Girl Scout.

- “I love Jones Beach. I grew up coming here, and even though I live on the North Shore, I come here every weekend. I just want to take care of it.” – Sherri Kaplan, Commack resident originally from Wantagh.

At the Twin Lakes Preserve in Wantagh, beer cans floated idly by while discarded paper and food wrappers peppered the trails. Eight miles south of the preserve, Jones Beach State Park had its fair share of litter, as six-pack yokes and vape pens were buried near snow fencing and rolled-up beach access mats, both of which needed to be set up before the park’s annual air show.

On May 5, about 200 Long Islanders helped beautify and prepare both parks for the summer season as part of the seventh annual I Love My Park Day, hosted by Parks & Trails New York, a non-profit environmental advocacy group, in partnership with the New York State Office of Parks, Recreation and Historic Preservation. These locals were a fraction of the 1,800 volunteers who helped clean up and improve 23 of Long Island’s state and national parks, historic sites and public lands.

“New York’s park legacy is a responsibility handed down from one generation to the next,” said Robin Dropkin, Executive Director of Parks & Trails New York. “Through I Love My Park Day, New Yorkers are able to step up and do their part for their parks.”

Volunteers had a variety of reasons for participating in I Love My Parks Day, ranging from spending an afternoon with family and friends to protecting the environment for future generations.

In Wantagh’s Twin Lakes Preserve, Lion Scout Nicholas Pellegrino, of Wantagh, came with his mother, Kate, as a part of his local Pack 191. He had so much fun helping out his park that he did not want to leave until the whole park was spotless.

“We can come back anytime you want to pick up garbage,” Kate said to her ambitious son.

Jones Beach welcomed volunteers from all over Long Island, including members of Boy Scout Troop 157. Assistant Scoutmaster Alex Lehmann, of East Meadow, brought his 10-year-old son Aidan and scout Jonathan Lima, a nine-year-old from East Meadow, out to set up beach access ramps, which are used by disabled guests to get closer to the shoreline.

“I just feel it’s essential for the boys to learn the value of being a part of the community and trying to help out,” Alex Lehmann said. “This is another opportunity to give back. I saw an advertisement about this and said, ‘Hey! This is something for us to do.’”

Local children and teens from Girl Scout Troops 3566 and 3537 also came out for the early Saturday morning projects. Alexandria Cassar, a 13-year-old Girl Scout from Wantagh, and 12-year-old Priya Lall, Cassar’s fellow scout from Levittown, cleaned up the beach in order to protect local wildlife.