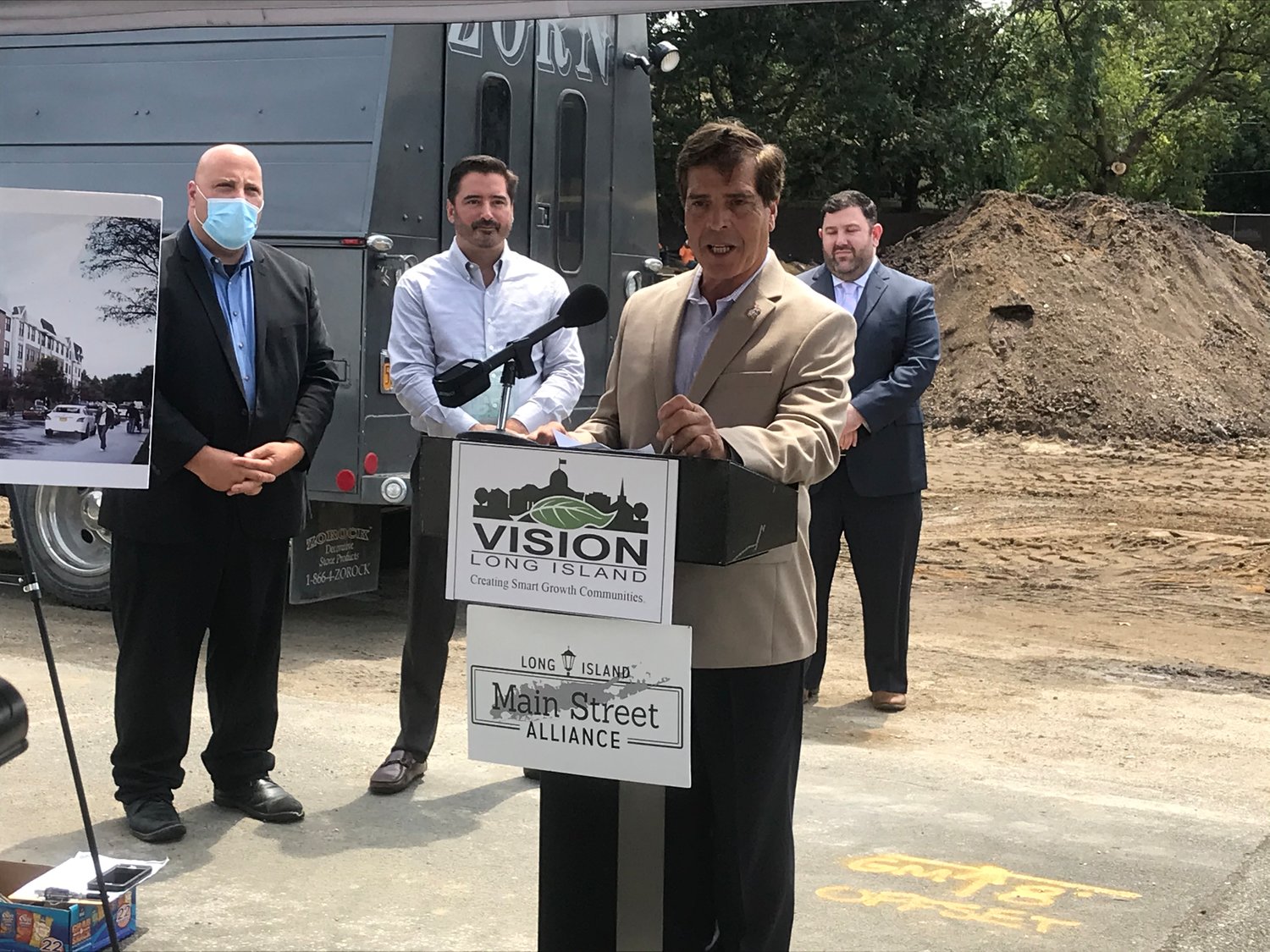 Lynbrook Mayor Alan Beach, at lecturn, and developer Anthony Bartone were presented with Smart Growth Awards from Vision Long Island on Aug. 6 for the forthcoming Cornerstone at Yorkshire project. Beach spoke about the importance of the project.
MIke Smollins/Herald 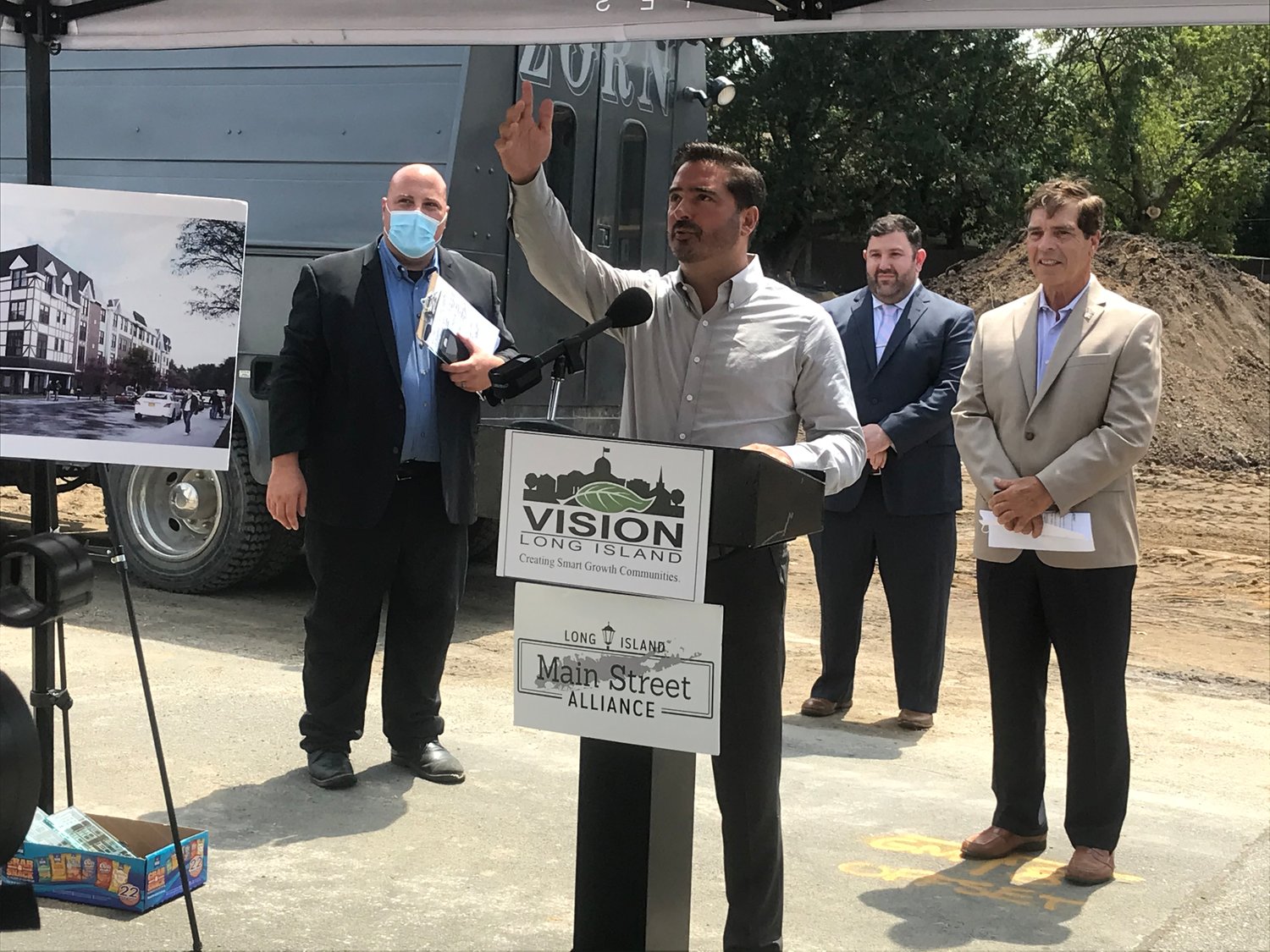 Bartone also earned the award, and said he was pleased to finally have a chance to build something in Lynbrook.
MIke Smollins/Herald 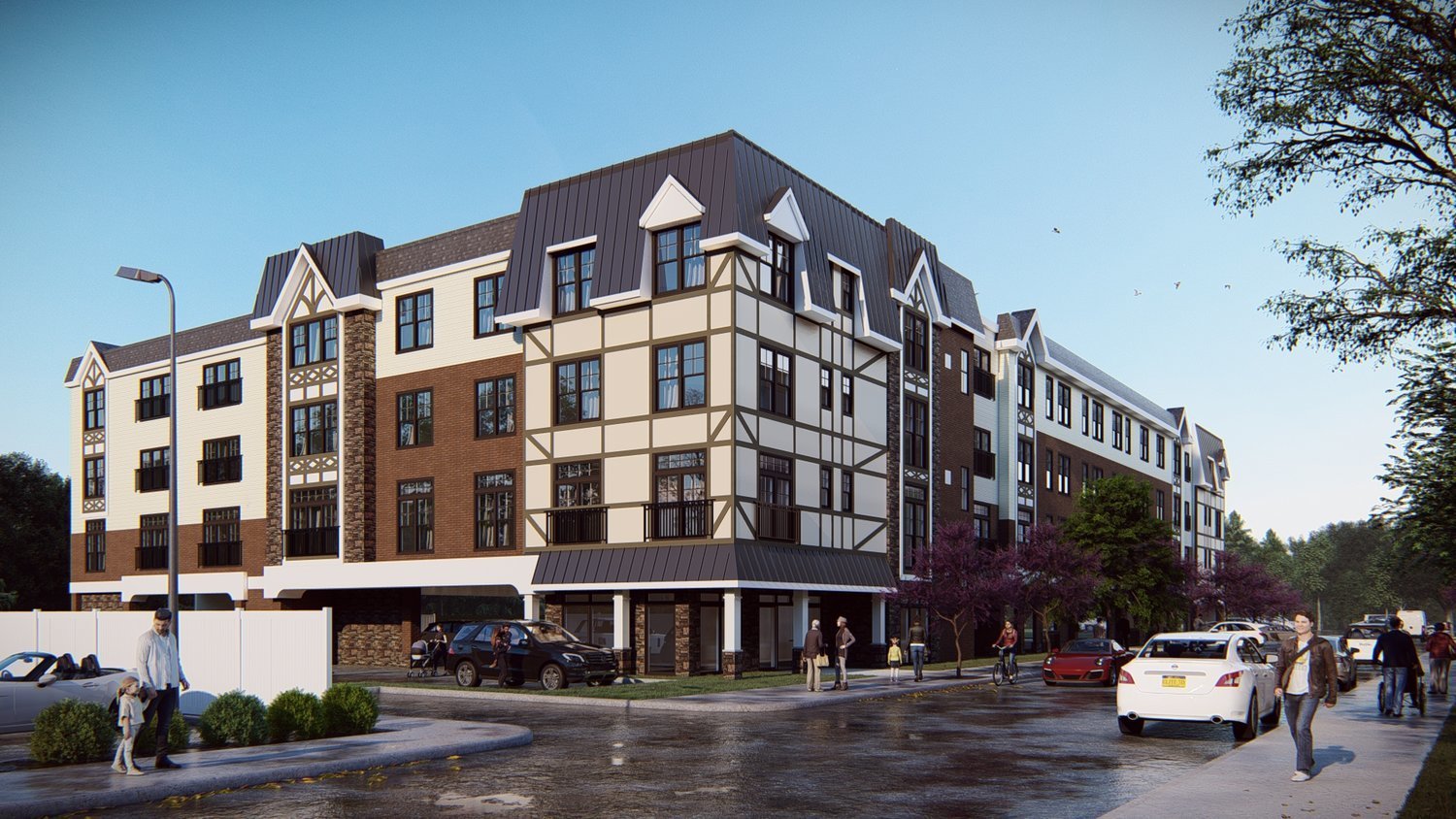 A rendering of the 80-unit, $24 million Cornerstone at Yorkshire
Courtesy Terwilliger & Bartone Properties 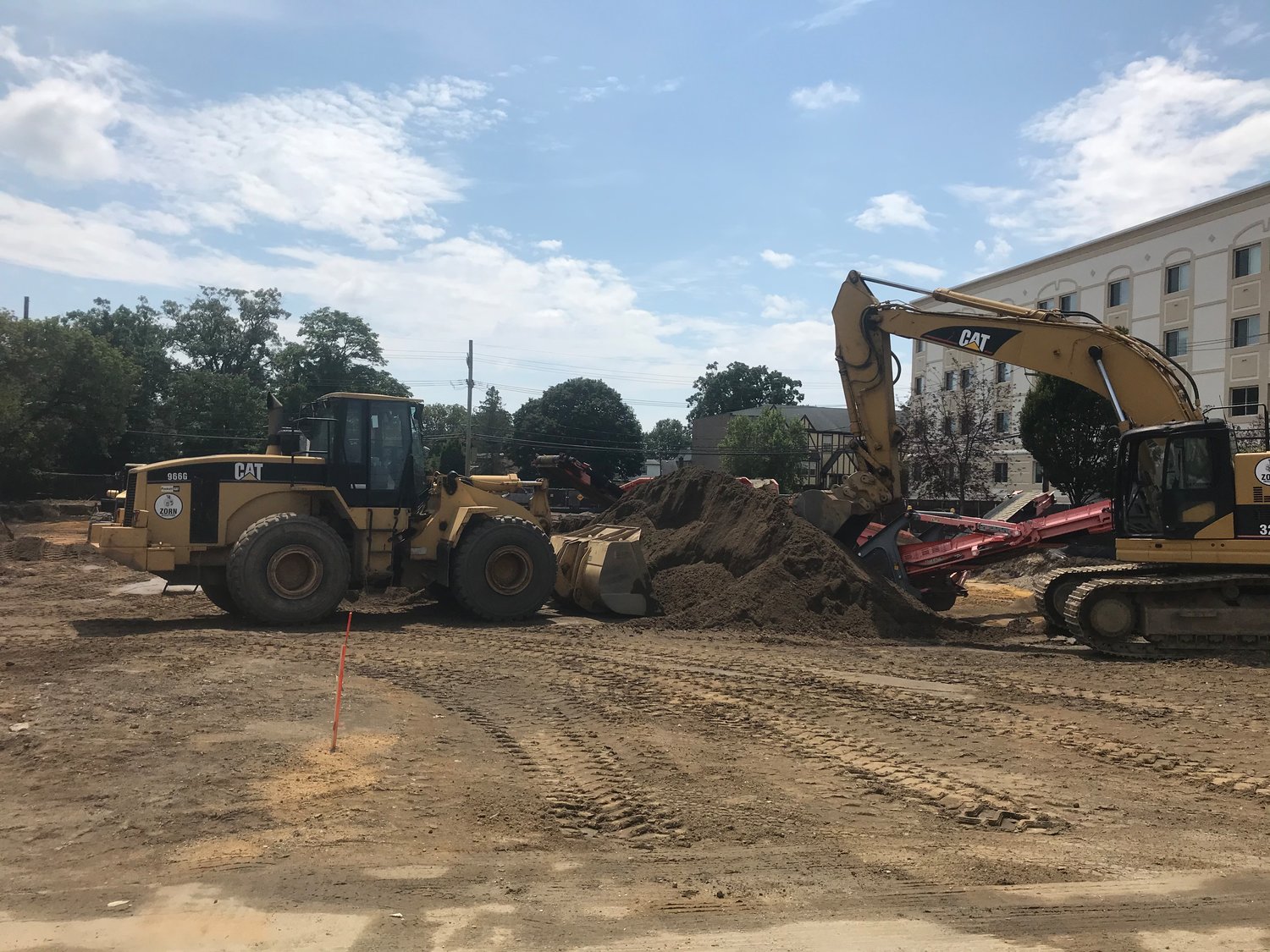 The apartment complex will be built at the site of the former Capri Lynbrook Motor Inn, at 5 Freer St., which was razed in June.
MIke Smollins/Herald
Previous Next
By Mike Smollins

Standing at the site that once housed the controversial Capri Lynbrook Motor Inn on Aug. 6, Mayor Alan Beach and developer Anthony Bartone accepted Vision Long Island’s Smart Growth Award in front of a construction site and mounds of dirt where a luxury apartment complex will soon stand.

The 80-unit, $24 million Tudor-style Cornerstone at Yorkshire apartment complex project will put to an end a decades-long attempt by village officials to shut down the Capri. The motel was razed in June, and the Farmingdale-based Terwilliger & Bartone Properties will build the apartment complex. The project also ends a long and arduous attempt by Terwilliger & Bartone representatives to develop in the village.

“It was a long and hard effort on our part,” Beach said. “Terwilliger & Bartone really hung in there and we battled together. The fact that they were able to get to the community and explain exactly how the project was going to move forward did make the project a lot easier.”

Beach and Bartone were each presented with awards by Eric Alexander, the executive director of Vision Long Island, a Northport-based company that promotes downtown redevelopment, The awards are given to projects that Vision Long Island believes are crucial to the revitalization of downtowns across Long Island, while increasing the density, and by extension, economic viability of communities in the area.

Alexander said the project helps remove a blight on the community, and also thanked the Lynbrook Chamber of Commerce, village board and the developers for supporting the project.

“Clearly, there were issues on this site, we like to see redevelopment transform communities,” he said. “We like to see the public plugged into the planning process, there were public meetings to guide this project, that’s part of it. We even like to see adjacent uses come to life.”

While receiving the honor, Bartone, a managing partner for Terwilliger & Bartone, thanked village officials, Vision Long Island, the chamber, his construction team, his partners and his financial backers for their support.

“It’s truly an honor,” he said. “I thank Vision Long Island. I thank the mayor and the village, and we look forward to maybe this being the first of many to come here.”

Attendees at the event included Beach, Bartone, Alexander, Deputy Mayor Michael Hawxhurst, Trustee Ann Marie Reardon and representatives of the Chamber of Commerce, including  President Steve Wangel, who lauded the anticipated positive impact the project would have on the village’s economy.

“It’s going to wind up being a luxury rental that’s bringing new people into the community,” he said. “A demographic that loves to shop locally, a demographic that will really enhance our community. I can’t say enough about this project.”

The apartment complex will be built at 5 Freer St., where the Capri had operated since 1985. Parking will extend to nearby Roxy Place. There will be eight two-bedroom apartments that will rent for about $3,400 per month, 44 one-bedroom units that will cost roughly $2,800 and 28 studios, which will be about $2,300 per month. Eight units will be set aside as workforce housing, which, under Department of Housing and Urban Development regulations, must have reduced rents for households earning up to 80 percent of the median income for the area.

In February, the Nassau County Industrial Development Agency granted Terwilliger & Bartone a mortgage-recording tax abatement, a sales-tax abatement and a 20-year payment- in-lieu-of-taxes, or PILOT, agreement for the four-story building, which will begin at the present tax level of $228,155 per year and gradually increase to $1.1 million by its final year. Village officials approved the project, 4-1, in November.

Beach said that the Capri was often the site of illicit activities, such as drug use and sales and prostitution, and there have been many arrests at or near the facility over the years. With a new complex in the works, he noted, it was a win for the community.

He added that the project helped get rid of a “terrible, terrible drug infested nuisance in our village,” and made way for a state-of-the-art building that will “blend in so nicely” with the surrounding businesses and community.