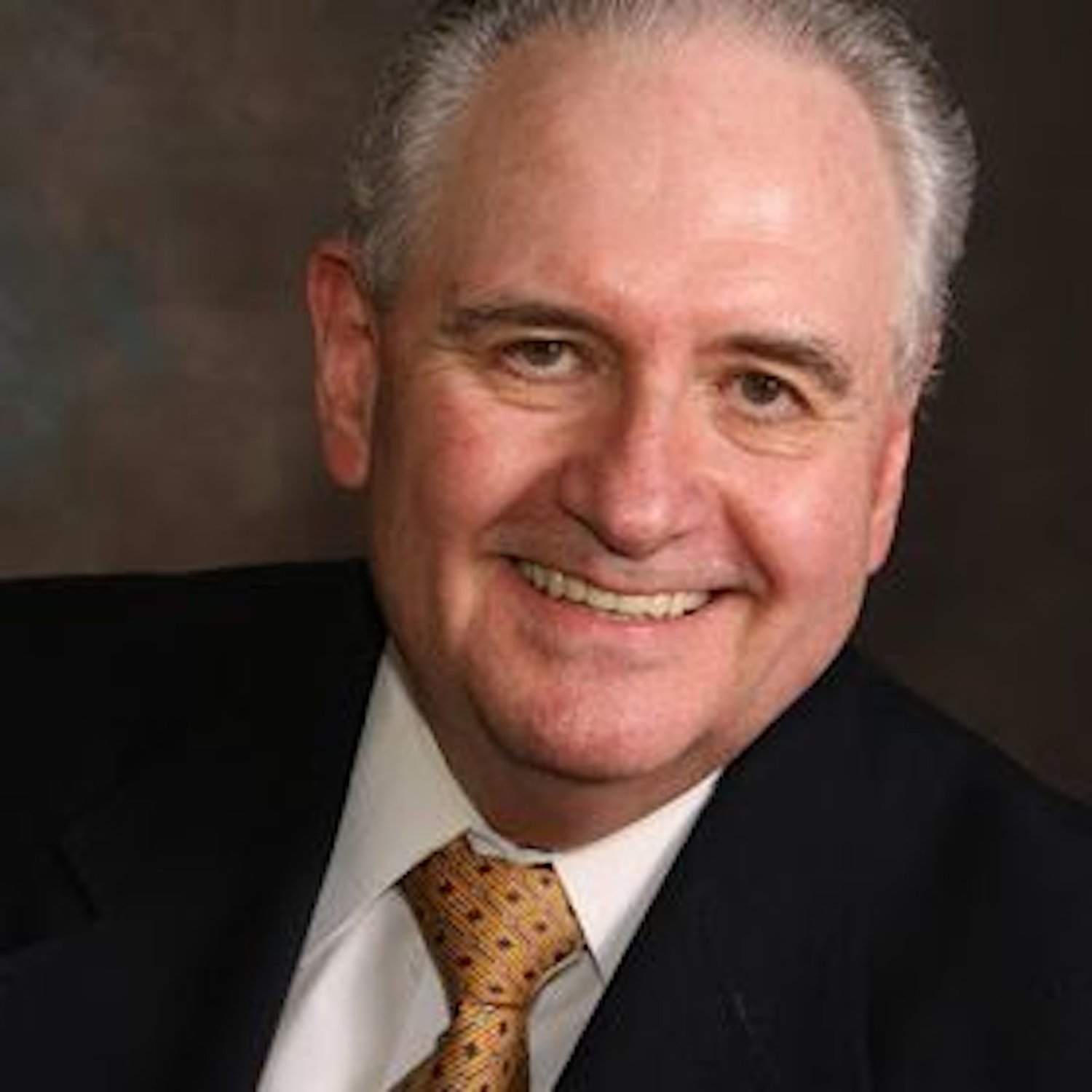 Clarence William Gaylor Jr., who died on Nov. 28, at age 79, owned the Lyn Gift Shop, on Atlantic Avenue, for more than three decades and was active in the Lynbrook community. He was the father of County Legislator C. William Gaylor III.
Courtesy Flinch & Bruns Funeral Home 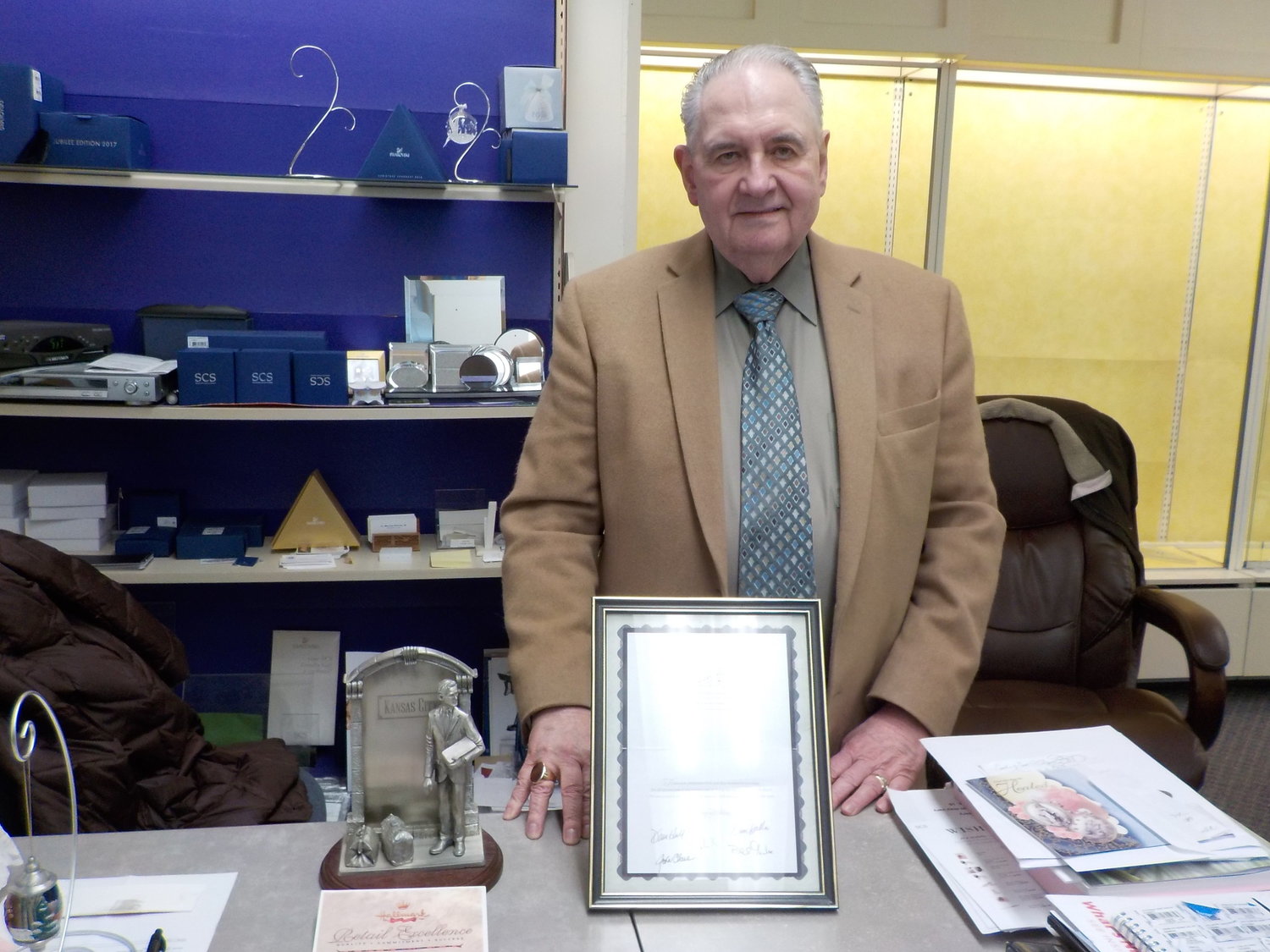 Gaylor displayed documents and awards that the Lyn Gift Shop had earned over the years for excellence in retail as a Hallmark store. He died on Nov. 28 at 79, but leaves behind a legacy in the village.
Mike Smollins/Herald
Previous Next
By Mike Smollins

Clarence William Gaylor Jr. could often be found sitting in an office chair at the Lyn Gift Shop on Atlantic Avenue, dressed in a sport coat and tie. Beside him was another chair,  often occupied by a customer, family member or friend who had stopped to chat with the longtime storeowner.

“He was always a familiar, smiling face in Lynbrook,” recalled his son, County Legislator C. William Gaylor III. “A lot of people over the years would come in, and he’d hold court. They’d talk about what was important and life in general.”

The elder Gaylor died on Nov. 28, at age 79, of complications of a heart attack. He left his mark on the village through his business and volunteerism in many local civic groups. The owner and operator of the gift shop for nearly 35 years, he was affectionately known as “Mr. Hallmark.”

Gaylor served the village in many roles, including as president of the Lynbrook Chamber of Commerce, an Elks Lodge No. 1 officer, a Lynbrook Fire Department Hose Company associate member and president of the Lynbrook Gardens cooperative apartments. He also served on many village committees, including the Beautification and Community Chest committees, volunteered at Our Lady of Peace Church, and was a member of the Historical Society of East Rockaway and Lynbrook.

Gaylor was born on Oct. 26, 1941, to C. William Sr. and Evelyn Gaylor. He spent his early life in Garden City, and his family eventually moved to Vincent Avenue in Lynbrook. He met his wife of nearly 60 years, Lillian, as a teenager and graduated from Lynbrook High School in 1960. After high school, Gaylor worked for the Town of Hempstead, and eventually was promoted to executive assistant to the Town Board before becoming executive vice president of the Long Island Association. He and Lillian had two sons, C. William III and Robert, who died last year.

In the mid-1980s, Gaylor opened the Lyn Gift Shop, which sold greeting cards, figurines, collectibles, toys and more. He sold the shop, which became a village fixture, to Al Patel in 2017. After the sale, Gaylor could still be found in his customary seat, chatting with patrons and friends.

“He always had a smile, and always welcomed everybody in,” his son said, “and he was famous for always wearing his sport coats. From Thanksgiving to Christmas, it was always either a red or green jacket, and he’d alternate every day in holiday mode.”

The younger Gaylor added that his parents worked seven days a week in the shop, from 9 a.m. to 7 p.m., and every holiday except Memorial Day and Independence Day. There were many Christmases, he recounted, when his parents opened the store to last-minute holiday shoppers for a few hours before attending a family dinner.

“They loved to be a part of the fabric of the community,” Gaylor said. “My dad was always a familiar smiling face and always willing to help.”

Chamber of Commerce President Steve Wangel, who owns the Kitchen Loft on Union Avenue, said he met Gaylor in the fall of 2001, when Gaylor was the chamber president. Wangel said they hit it off immediately, and Gaylor invited him to a chamber board of directors meeting, at which the board approved Wangel as a member. When he later became president himself, Wangel said, he looked to Gaylor for assistance.

Wangel added that Gaylor’s involvement went further than the chamber. “I will continue to be guided by his memory,” he said, “and I will miss him very, very much.”

Lynbrook Mayor Alan Beach also lauded Gaylor for his dedication to the chamber.

"Bill had a tremendous impact on Lynbrook, through his business at Lyn Gifts, his leadership at the chamber and his involvement in the community," he said in a statement. "We actually shared the same birthday, so Bill would call me every year to catch up. All of Lynbrook will miss his presence."

Gaylor used his store to give back to the community. Many Lynbrook High School students worked there over the years, and Gaylor mentored them and taught them about running a business. He also had special-needs students work there a few hours a week. Additionally, the Gaylor family created a scholarship that is given to two Lynbrook students each year.

In addition to his wife and son, Gaylor is survived by his sisters, Corinne and Betty; his daughter-in-laws, Deborah and Haley Gaylor; and his grandchildren, Tiffany, Kristine, Jennifer, Billy and Emily.

His wake was Dec. 3 at Flinch & Bruns Funeral Home, and his funeral Mass was celebrated at Our Lady Of Peace on Dec. 4. In lieu of flowers, his family has requested that all donations be made to the Our Lady of Peace Social Ministries.

“His legacy is the amount of involvement he had in the activities and different clubs and organizations,” his son said. “That’s really his legacy: the love he had for Lynbrook, his community, and his friends and family.”