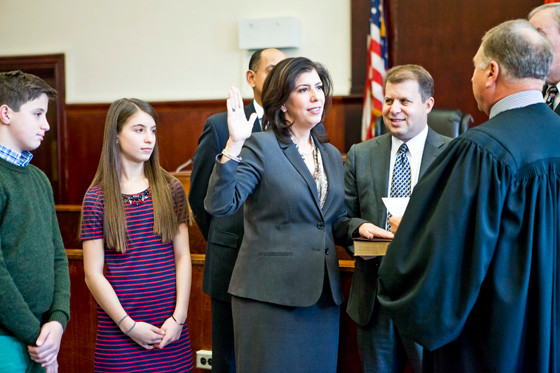 Madeline Singas took the oath of office as acting Nassau County district attorney at noon Tuesday in Mineola. She was chief assistant D.A. for three and a half years under Kathleen Rice.
Courtesy Nassau County District Attorney’s Office
By Brian Racow

The governor can name another interim D.A. anytime between now and Election Day on Nov. 3, when Nassau voters will choose the next D.A. for a four-year term. Rice’s move to Congress will reset the election schedule for the D.A.’s post — it and all other countywide positions were last up for election in 2013.

“While I have very big shoes to fill following [Rice’s] nine years as district attorney, I am honored and privileged to represent this office and the 1.3 million residents of Nassau as I continue our office’s commitment to integrity and the fairest administration of justice,” Singas said in a statement. “As [Rice’s] chief assistant for the last four years and as a lifelong prosecutor before that, I will make sure that there’s a smooth transition at the district attorney’s office. I’m looking forward to continuing to refine many of the innovative programs that we initiated during the last nine years, and ensuring that Nassau County continues to be one of the safest big counties in the United States.”

According to the 2011 news release announcing Singas’s appointment as chief assistant D.A., she started out in 1991 as an assistant D.A. in Queens. Her résumé states that she served as deputy chief of the office’s Domestic Violence Bureau from 2001-06. She then left Queens for the suburbs, taking a job as chief of Rice’s Special Victims Bureau, serving in that role for another five years.

“Madeline is an innovative, highly decorated career prosecutor who will work tirelessly to keep our office on the forefront of effective, smart law enforcement,” Rice said when she named Singas her chief assistant D.A. “From murder to domestic violence to child abuse, Madeline brings with her a wealth of experience handling some of our county’s most serious cases ... I am confident that her service to Nassau residents will continue to be marked by excellence and professionalism.”

Singas graduated from Bronx High School of Science in 1984, Columbia University in 1988 and Fordham University School of Law in 1991.