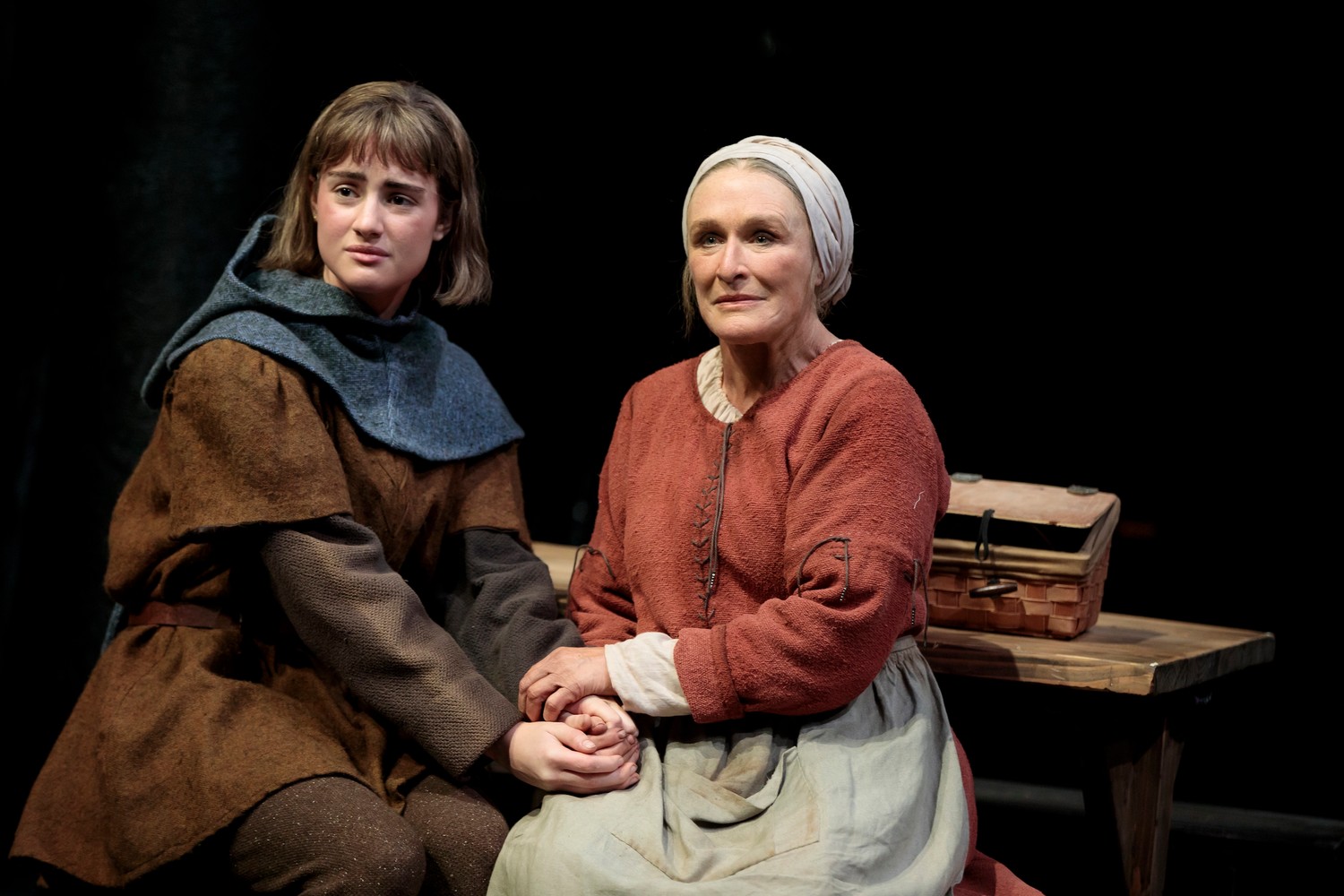 Glenn Close stars as Joan of Arc’s mother, a sensible, hard-working, God-fearing peasant woman, in the new play “Mother of the Maid.” The epic is tale told through an unexpected new perspective.
Courtesy Joan Marcus
By Iris Wiener

Name an instrument and Alexander Sovronsky can surely play it; the triple threat actor-musician-composer began developing a talent for creating sound in various art forms at 3-years-old, eventually using his gift to contribute to innovative and thought-provoking work.
His oeuvre as a composer and co-sound designer is currently on display in his third piece with the Public Theater, “The Mother of the Maid,” starring Glenn Close. Additionally, Sovronsky is the composer and music director for “Indecent” at Washington D.C.’s Arena Stage, where he is also appearing in the award-winning play as Mayer Balsam (a character who happens to be. — you guessed it — a musician).
Sovronsky credits the resources he had locally with helping him to become the artist that he is today. He initially learned to play the violin in Glen Cove and Locust Valley with Long Island Suzuki Strings, and took lessons and honed his craft in a church on Forest Avenue in Glen Cove.
“Playing became a big part of my life and it also completely shaped my life as an artist,” he says. “All of the music that I design and write is entirely based on what I can do and what I can play.” Sovronsky studied with Tal and Joe Schifter of Suzuki Strings, musicians who remain a fixture in the area and at many of his shows. “You’ve got to know where you came from,” he says gratefully of the support he receives from former teachers.
One of the foundations of Suzuki training is learning to hear music and then repeat it with an instrument, playing it by ear. “It is why I can hear a tune and just repeat it immediately,” Sovronsky says of how he honed his skills with improvisation and composition.


He came into his own as an actor when he got to Syosset High School where he was a regular on director Gene Connor’s stage (a favorite role being Hamlet). After studying theater and classical acting in college, Sovronsky went on to work as a musician, composer, actor and even fight director, for shows ranging from Broadway’s “Cyrano de Bergerac” with Jennifer Garner and Kevin Kline, to multiple productions at Shakespeare & Company and Atlantic Theater Company.
In 2007, Sovronsky played a musician and actor in the Public Theater’s “Romeo and Juliet,” while also co-arranging the music written by Michael Friedman (“Bloody Bloody Andrew Jackson”).
“I played mandolin on stage for that Shakespeare in the Park production,” he says of the beginning of an ongoing collaboration with the Public. “A few years later I was music directing ‘Measure for Measure’ [for the Public] that a friend of mine, John Gromada, was designing. And now here I am with ‘Maid,’ composing and sound designing my very own production for them. Every time I work there I have a different job title!”
“Mother of the Maid” tells the story of Joan of Arc’s mother, a peasant woman whose faith is upended as she deals with the journey of her odd and extraordinary daughter. Sovronsky actually began working on the show in 2015 when it was produced by Shakespeare & Company in the Berkshires. “Later, when ‘Maid’ got picked up by the Public and Glenn Close said she would do it, it just became a matter of finding the time.” Sovronsky had teamed with director Matthew Penn on a number of other projects, so Penn knew he wanted Sovronsky for this one as well. “When we did ‘The Beauty Queen of Leenane,’ we knew we were clearly a good, solid team. Every time he’s done a play he’s called me to do the music.”
When it came to designing the music for “Maid,” which is set in the 15th century, Sovronsky knew the play had a contemporary feel; therefore, he wanted the music to live in both worlds, just as playwright Jane Anderson’s writing is reminiscent of both time periods.
“I immediately assembled a palette that draws on 15th century instruments and different types of Renaissance and medieval drums,” he describes of his design process. “I also picked modern pianos and percussion, like hang drums or pan drums. They sound like very low, mellow chimes. They’re metallic and kind of amazing!”
Because the play is about Joan of Arc, Sovronsky wanted to make it sound spiritual without being specifically religious. He built the music around the way the hang drums resonated and reverberated. “That is just one of a lot things to consider when you’re putting a show together,” he says. “Live shows may not be consistent,so the design can get crazy, but I love it.”
In moving forward from such a high-profile New York production (leading lady Close is one of the most passionate artists I have ever met!”), Sovronsky is excited about his work with “Indecent,” as it is the only production that, with special permission, is using an original score.
“It is kind of a big deal,” he says enthusiastically of writing the new score and arrangements of the songs in the show.
Despite his hectic work schedule, Sovronsky never forgets where he got his start. “Without such a great musical education on Long Island, I would not be doing what I do.”
Visit www.publictheater.org. for more information about Mother of the Maid.
Report an inappropriate comment